The Manyara Lake National Park is located on the North-Western shore of the Manyara Lake, one of the 3 salty lakes in Northern Tanzania, the other alkaline lakes are the Natron Lake and the Eyasi Lake.

The original surface of the National Park was 330 square kilometers, of which about 200 square kilometers occupied by the Manyara Lake, that is located at the base of the Western slope of the Rift Valley and is, in fact, an alkaline lake; recently, another 250 square kilometers of the Park area of the Marang Forest Reserve have been annexed to the park area, that is an important corridor for the seasonal migration of the elephants heading to the upper plateau.

In the Manyara National Park there are different habitats, each of them hosting different species of animals; entering the park from the North we find ourselves in a thick primary equatorial forest that hosts the blue monkeys, the timid bushbucks, the impalas, some species of eagles and other species of birds and big clans of baboon olives that are composed of over 100 specimens; many leopards live in this area of the park, but it is difficult to spot them because they tend to hide in the bush.

You cross a forest of palm trees and other plants typical of semi-arid places such as acacias, here you usually meet giraffes and elephants, then come some open savannah spots and expanses of tall grass, this area of the park is the favorite by herds of zebras and wildebeests; finally, you will cross an area dotted with small ponds of water, the favorites of buffaloes, hippos and waterfowls, that are also found at the Mto Wa Mbu river and in the alkaline waters of the Manyara Lake.

In the park there are also the Maji Moto, the hot springs that are located in the South, in an area of acacia woods; here is also a seasonal waterfall that comes from the Western slope of the Rift Valley.

After breakfast we start from our tented camp and in a short time we arrive at the entrance gate, the Lake Manyara National Park is famous for the lions that climb on the trees, we wonder if we will see them.

We cross the forest, we find ourselves surrounded by tall trees of a bright and intense green, a marvel for the eyes; to then reach the part of savannah and the shore of the lake.

We walk all the tracks of the park in search of animals and I must admit that we were pleasantly impressed by both the flora and fauna of this park.

We spot many birds, this park, despite its small size, boasts a large number of species of birds, about 400; we spot the hornbill, including one of my favorites, the silvery cheecked hornbill, the colorful kingfishers, the bishops and the weavers, you do not miss the birds of prey, like the augur buzzard and the eagles, and waterfowls, such as the black-winged stilt, he pink flamingos, the cormorants, the herons, the Egyptian geese, the lapwings and the plovers and many others.

We also find several herds of elephants, with many puppies, busy eating in the bush; they are very calm even when they approach our car; it is a good sign because it means that they do not see man and cars as a threat and therefore there has been no poaching, or other dangers, recently in these areas.

We also see the giraffes, the herds of zebras and wildebeests and the buffaloes, some of which are immersed in ponds of water, we also find an anthill from which comes a beautiful monitor, it is there motionless, it seems posing for photos.

At lunch we stop in the picnic area that has a beautiful view of the lake, thank goodness that the tables are located under a structure that shelters them from the sun because it is quite hot.

We relax a bit after lunch, admiring the view, right after we descend to the lake and walk the wooden walkway, that was built in order to allow visitors to enter the alkaline lake and be able to see more closely the flamingos and the other birds like storks and cranes.

Going back to the exit we still walk the various tracks of the park, we have not yet seen the lions, but here, with all this vegetation it is not simple; we only see very numerous baboons' troops, busy eating but also arguing, combing and chasing one another.

After a while our patience has been rewarded: in the shade of some bushes there is a herd of lions that shelters from the heat of the sun, they are not perched on the trunks of the trees, behavior for which they are famous in the Lake Manyara Park, but they are still beautiful, and then, on this trip, we saw them climbing on the branches both at the Tarangire National Park and at the Serengeti National Park.

We leave the park in the late afternoon and go back to our tented camp, this is the last safari day of this trip and we are a little sorry, but we are already planning the next trip
:) 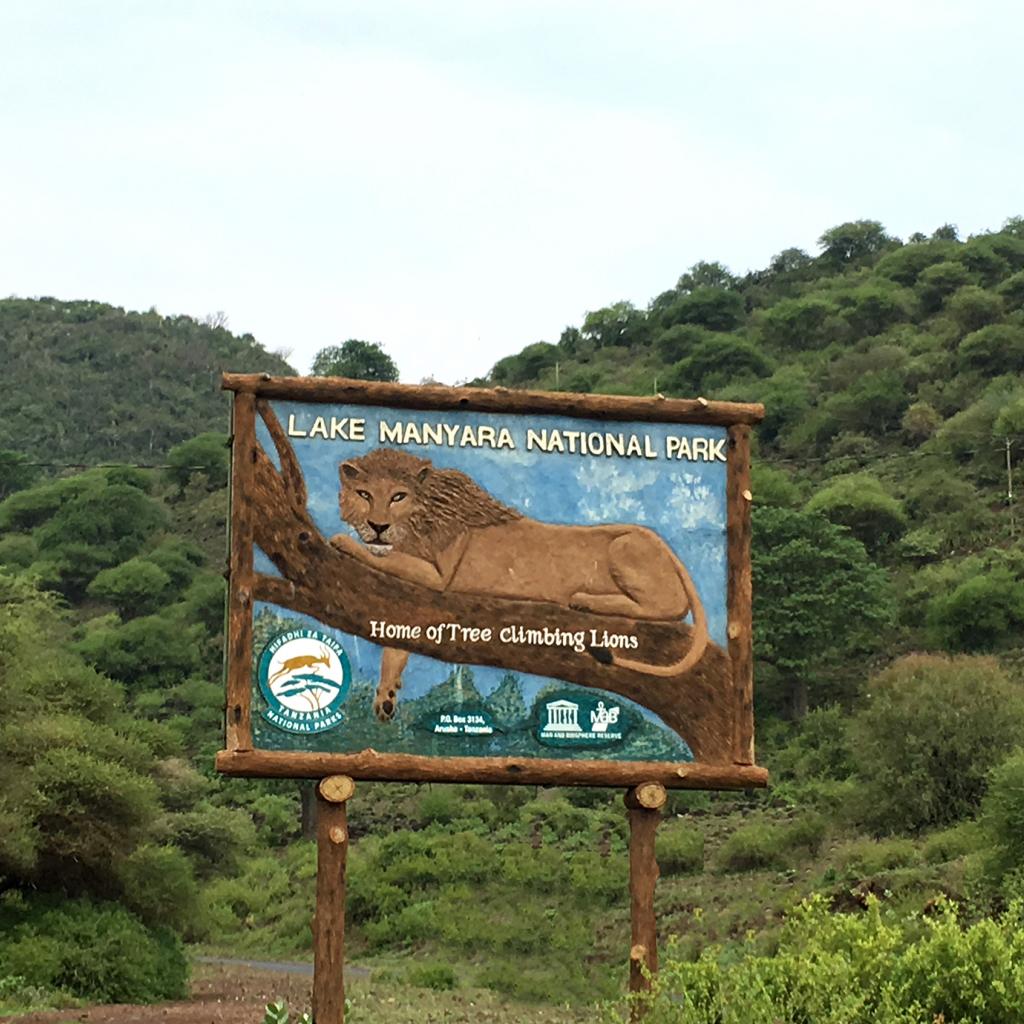