The Serengeti National Park is one of the best known parks in Tanzania and in the entire African continent; one of the reasons why it enjoys great fame is the Great Migration that, every year since unmindful time, moves through its prairies: almost 2 million wildebeests and zebras move in the park and in the surrounding areas, that constitute the Serengeti Ecosystem, constantly looking for new pastures and water, on which they depend.

In addition to the Great Migration, the park is home to a high concentration of animals, especially large cats, such as lions, leopards and cheetahs, that, during the dry season, are concentrated near the few water sources while, in the green season, are dispersed in the territory.

Visiting the Serengeti in every season is a unique and exciting experience: its endless prairies to the South, the Seronera valley with its perennial river and its kopjes in the central area, the Grumeti river with its majestic crocodiles in the Western area and the imposing Mara river in the North, which borders the Masai Mara National Reserve in Kenya.

In the Ndutu area this season, from December to April, the Great Migration is present: as far as the eye can see, there are many herds of wildebeests and zebras, but also of Thomson's gazelles and Grant's gazelles, that browse the grass of these immense prairies of low grass; Serengeti in fact, derives from a Masai word, "siringit" that means "prairies as far as the eye can see".

Such a high presence of prey inevitably attracts many predators, in addition to the felines residing all year round in this area, others migrate here for the occasion; this means that in this area there is a high concentration of animals and that you can make exceptional sightings.

The night before we arrived it rained so the tracks are flooded and muddy, we have to proceed with a bit of caution.

The Ndutu area ​​at this time of year is spectacular, the vegetation and grasslands are bright green, the Ndutu Lake is full of water and everywhere there are small gutters of water and ponds.

Besides the herds of the Great Migration, that are seen in every direction, there are also small antelopes, giraffes, elands, kudus, Coke hartebeests, impalas, spotted hyenas, jackals, lions, cheetahs and many species of birds, including many birds of prey, like eagles and vultures, various species of storks, such as marabous, and other species.

At this time of the year there are good chances to watch hunting attempts, not all of them are successful, but it is still exciting to attend them.

We are very lucky: we spot 5 cheetahs, a mother with 4 already grown up puppies, they are in a bit higher grass area in the middle of nowhere, they look around pointing the gazelles; they make several failed attempts, as the gazelles manage to perceive their presence in time and escape, but in the end they manage, after a couple of hours, to capture a puppy of Grant's gazelle.

It's a sad moment for the gazelle, moving for the scene and exciting for the cheetahs; it's the first time we see cheetahs hunting from start to finish!

We spend two nights in Ndutu and during our stay here we see and photograph many animals and spectacular landscapes.

On the morning of the third day, after the last 3 hours of safari in the Ndutu area, we leave heading North, along a track on the border between the Serengeti National Park and the Ngorongoro Conservation Area; around us there are only herds of wildebeests and zebras, they are everywhere as far as the eye can see.

It's really exciting and it's a beautiful scene, it's just us and all these herbivores that are busy browsing; some zebra foal is already born, has a ruffled coat and remains very close to the mother from which it takes milk.

After about an hour's drive we arrive at the main road, turn left and after a short time get to the Naabi Hills gate; since it is time for lunch we stop at the tables that are there at the entrance, have lunch and then continue our journey.

Opposite us are the plains of the central Serengeti dotted with kopjes, what a show!

Here there are fewer herds than at Ndutu, a bit because in this period the South area is their favorite, thanks to the grass that, there, is more nutritious, but also because here it rained less in recent days and the grass is not as green as elsewhere.

We arrive near the Seronera river, at this time of the year it is difficult to understand where it is because everything is green, during the dry season instead it is the only patch of green in a boundless territory yellowed by the lack of rains.

We spend only one night in this part of the Serengeti during this trip; unlike the dry season, the animals are not concentrated along the river but are found everywhere in the surrounding area, we have indeed found a beautiful herd of lions with many puppies not far from our tented camp.

We also spot some lions that have climbed on the trees, in the green season it is easier to see them climb on the trunks to get a better view, the grass and the more luxuriant vegetation in fact do not allow them to scrutinize the horizon.

Shortly after we find a family of hyenas with puppies playing in the middle of the road, we also see 3 aardwolves in the green grass; it is the first time we see them and we are very happy.

We also see a beautiful herd of elephants with many puppies, a group of giraffes and two beautiful leopards, both lying on the branch of a tree with dangling legs.

We observe many birds including a beautiful martial eagle on the branch of a tree with a prey, several starlings, sea jays and many others.

In all we do a safari the afternoon we entered and another in the morning before leaving the park; along the main road, which leads to the Naabi Gate and that passes between some kopjes, we see 2 cars stopped on the side of the road, they are looking in the direction of the kopjes: a leopard!

Lying on the kopje that scans the horizon there is a beautiful leopard in all its elegance; we watch it for a while but then it's time to head to the gate.

The Serengeti National Park, as always, has been able to fascinate and give us indescribable emotions. 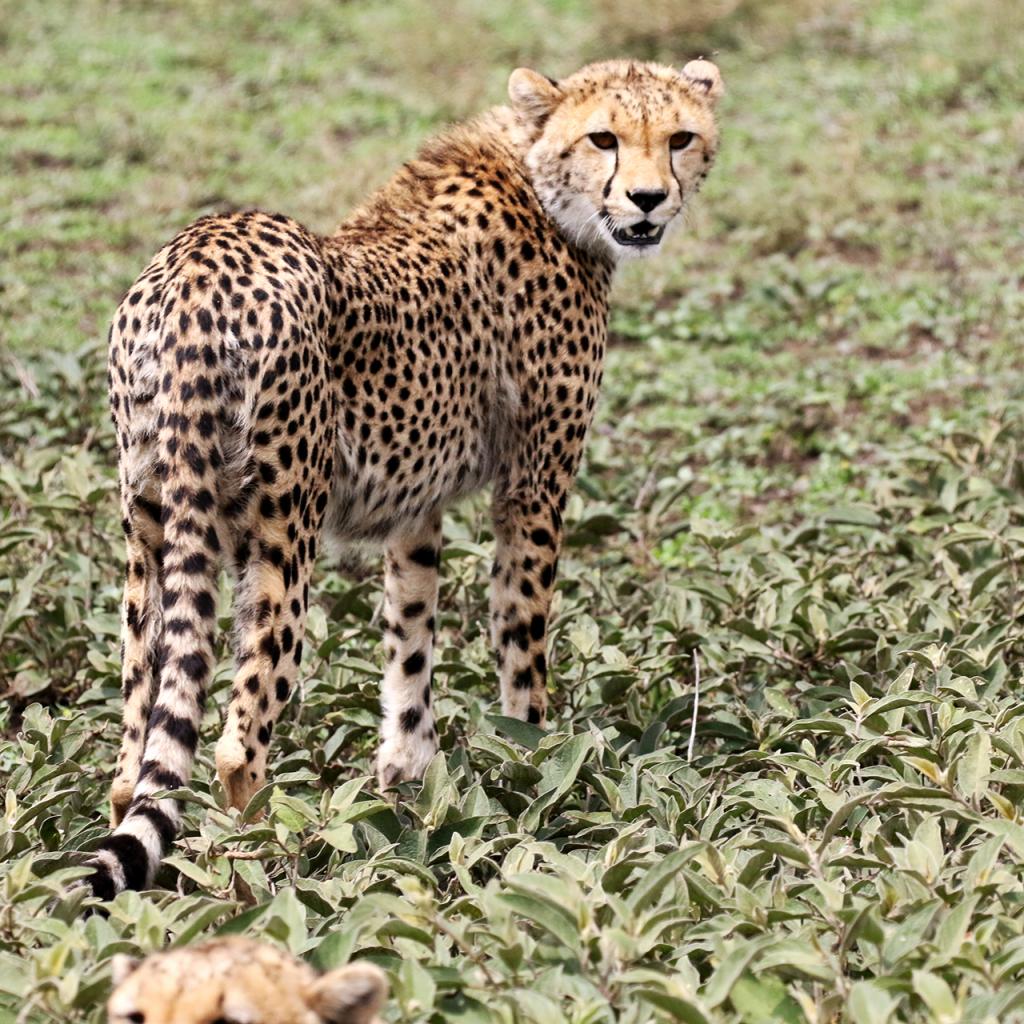