Masai Mara National Reserve: lion - Photo Credits: Romina Facchi
The Masai Mara National Reserve is the largest conservation area in Kenya and it is certainly the best known and most visited; it is located in the South-Western part of the country and it is bordered by the Serengeti National Park in Tanzania to the South, by the Escarpment Oloololo to the West, also known by the name of Syria, which is part of the Western section of the Great Rift Valley, while it borders the Conservancy, or private reserves, to the North, East and South-East, that are part of the conservation areas that were established to protect nature and wildlife living in this paradise and that usually trespass the boundaries of the National Reserve.
From an administrative point of view it is not a national park, and therefore it is not under the jurisdiction of the Kenya Wildlife Service, but it is a National Reserve administered by a local County: the Eastern part of the reserve, to the East of the Mara River, is managed by the Narok County Council, while the Western part, to the West of the Mara River, i.e. the Mara Triangle, is administered by the TransMara County Council.
The National Reserve is located at an altitude ranging between 1,500 and 2,170 metres above sea level, and it covers an area of 1,510 km2; it doubles the size if you include the Conservancy area.
The Masai Mara is named after the Maasai people who have inhabited these lands since the seventeenth century, when they came here from what is today South Sudan, and the Mara River, with its tributaries, that crosses it in several points; "Mara" in Maa language, the language spoken by the Maasai people, means "dots" and this refers to two things: the grasslands dotted with trees and acacia shrubs and the shade of clouds on the plains.
The landscape of the Masai Mara National Reserve is dominated by grasslands, woods and acacia bushes, typical elements of the open African savannah that covers the central plain and the hills in the East.

The acacia bushes are the favourite place by the tsetse fly, which is responsible for sleeping sickness.

In the past, this insect was a danger for both Maasai people and cattle, as well as  for wildlife; but now it has been eradicated from the whole area as a result of the work of man, who has partially cleared infested bushes, but also thanks to the arrival, in the 1930s, of the elephant who reshaped this area.

The Mara River and its tributaries, especially the Talek River, divide the National Reserve into three parts; the river banks are covered with bushes and trees, the same that can be found on the lonely hills rising out from the plain.

The first conservation area was established here in 1961 and was enlarged during subsequent years to reach the current size; moreover, beyond the borders of the National Reserve several Conservation Areas have been created in recent years, acting as a sort of buffer where wild animals and man co-exist.

In 2010 the Kenya Wildlife Service made an application to UNESCO for the recognition to the Masai Mara National Reserve of the status of World Heritage Site, though to date it is still registered in the provisional list and the decision is pending.

Alongside the Serengeti National Park in Tanzania, the Masai Mara National Reserve, that is part of the Serengeti or Serengeti-Mara ecosystem, is an amazing and spectacular area home to one of the most incredible events of nature, the Great Migration, as well as being one of the best destinations for photo safaris.

The Masai Mara National Reserve is best known to travellers for three main reasons: the extraordinary concentration of lions, among the highest in Africa; a chance to see all the Big 5 and the presence in these lands, from June to the end of October, of the Great Migration: one of the most exciting and amazing phenomena of nature of our planet.

Nearly two million wildebeests and zebras gather here after an epic journey across the plains of the Serengeti National Park in search of new pastures and water; the Mara River and its tributaries are the only permanent and reliable source of water during the dry season.
Anyhow here they are not safe either: a high presence of predators and the need to continue to move from one area to another, forcing them to cross the Mara river, that is infested with crocodiles, are constant dangers forcing them to be always alert.
Viewing this spectacle of nature is undoubtedly one of the main reasons behind the choice of visitors to come from June to October, a time when the Masai Mara National Reserve becomes a little too crowded, but the crossing of herds is well worth a visit; although the crossing is repeated, there is clearly no guarantee of the time when it actually occurs.
As an alternative, you can travel to one of the private reserves surrounding the National Reserve or to the Mara Triangle, where there are less tourists and the wild animals are quieter; the Mara Triangle is also home to the highest concentration of wildlife of the entire Great Masai Mara ecosystem.
The Mara Triangle lies West of the Mara River, and covers a third of the surface of the Masai Mara National Reserve; inside there is one lodge only, this means there are far fewer visitors and the animals are more relaxed because the rangers make sure they are not disturbed and protect them from poachers.
In the Great Masai Mara ecosystem there are 95 species of mammals and 570 species of birds, a rich fauna with few equals in the entire African continent.

The land on which the Conservancies have been set up belongs to the Maasai people, the individual owners have rented the estate property to lodges and tented camps and are committed to remove their villages and livestock to preserve nature, in return the organisations managing the tourist facilities are committed to pay the rent and finance projects for the development of the Masai community.
The Masai Mara National Reserve and all the Conservancies are well worth a visit and each time of the year has its own special attraction: from June to October you can’t miss the migration of wildebeests and zebras; from November to April is the best time for bird watching, while in January and February you can witness the birth of most of the herbivorous puppies.
There is no lack of safari activities available to visitors: daylight game drives in both the National Reserve and the Conservancies; you can fly over the National Reserve on board of a hot air balloon at dawn, while walking safaris or night-time safaris in a 4x4 jeep are only possible in private reserves.
The Great Masai Mara Ecosystem has a delicate balance and it is at risk due to series of threats to which a solution is constantly looked for: the presence of numerous safari vehicles and off-road drives in the private reserves deteriorates the soil with a severe impact on its fertility; the presence of Masai villages and cultivated fields creates a barrier, a physical barrier to the free movement of wild animals and subtracts grazing pastures; the growth in human settlements in general threatens nature because they steal vital space to wildlife; finally poaching in recent decades has decimated many species of animals and some of them are severely endangered such as black rhinos, elephants and many others.
The Conservancy Areas have been established to try to create a sort of buffer to preserve nature; many positive results have certainly been achieved, but there are still many things to do; Conservancies also play a vital role in the preservation of nature; inside there are no human settlements of any kind nor Masai livestock, that allows wildlife to move freely without any hindrance or danger.
The Masai Mara National Reserve and the surrounding areas are home to more than one entity in charge of studying animals and the ecosystem; with positive effects not only for this portion of Kenya but also for other protected areas and for some species of animals living in most of Africa.
The Masai Mara National Reserve and the various Conservancies are about 6 hours’ drive from Nairobi; most of the 270 km road leading to the nearest gate is paved.
There are five entrance gates: Sekenani Gate, the main entrance that takes the shortest time if you come from Nairobi thanks to the good condition of the last stretch of road, passing through Narok,  unlike the rough roads passing through Lemek and Aitong, the Talek Gate, the Musiara Lake Gate, the Sand River Gate and the Oloololo Gate, that is the furthest from Nairobi and hence the least used.
As an alternative, you can fly from Wilson Airport in Nairobi, from Samburu, Nanyuki, Mombasa or Diani and land in one of the airstrips inside the National Reserve. 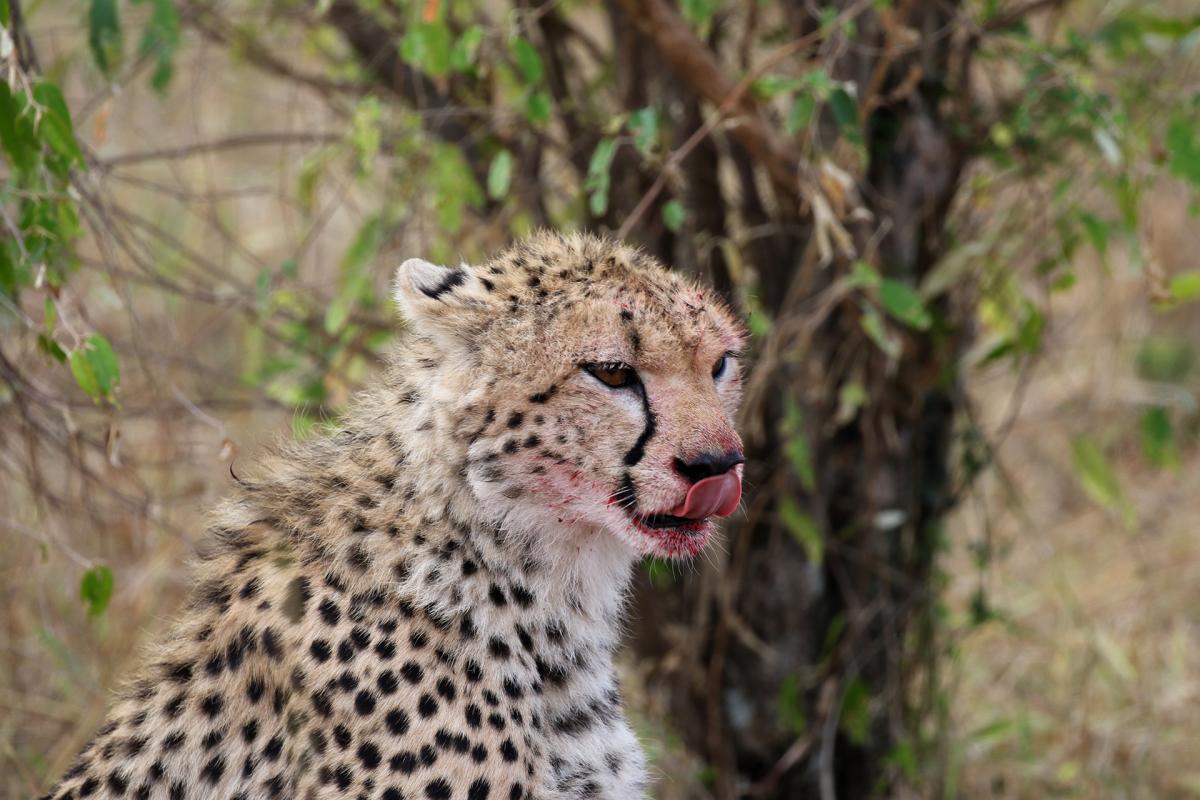 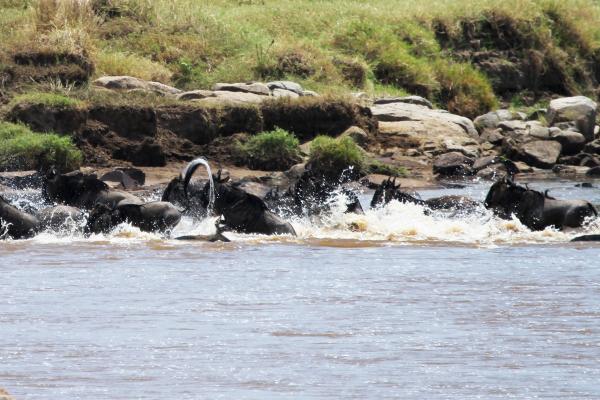 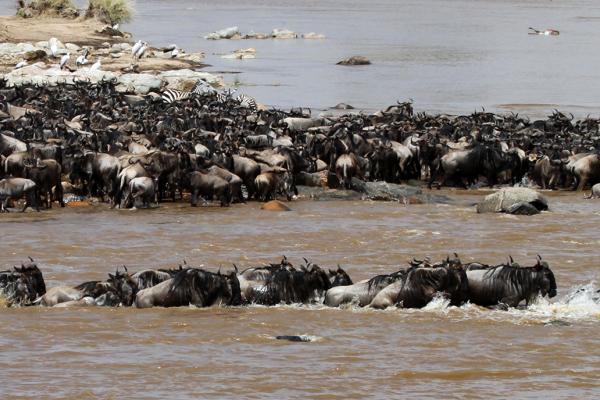 The Great Migration from August to October

Wildlife in the Masai Mara National Reserve and Conservancies

The Masai lands and their exploitation in the Masai Mara ecosystem

Seasons in the Masai Mara National Reserve and Conservancies