Lalibela, positioned at over 2,500 meters above sea level, is located in Northern Ethiopia and is considered a sacred city, thanks to the presence of twelve Coptic Christian sanctuaries, that were carved in the rock between the 12th and 13th centuries.

The charm of this city is indisputable, mysticism is almost palpable and the natural context that surrounds it is spectacular.

The original name of this city was Roha but it was changed to Lalibela in honor of the king Gebra Maskal Lalibela who wanted to create a new Jerusalem where pilgrims could come, to replace the "real" Jerusalem, fallen into Saracen hands; in reality the churches were not built normally, but were excavated and carved in the tufa rock that has a red brick color.

The builders basically followed two construction models: the hypogeum and the monolithic.

The hypogeum foresees that the building is made by digging a rocky wall and obtaining a more or less large environment inside the rock, the church is thus inside the rock with one or two external sides.

The monolithic requires that the building is constructed from a single block of rock, isolated from the original rock bank, digging deep trenches; in this way the only side in contact with the rock was the base that remained attached to the mother rock.

After having excavated the interior of both the hypogeum and the monolithic rooms, decorative elements were carved on the external and internal walls, especially crosses and niches.

The dimensions of the churches are not all the same, but they vary greatly from one another, some are so small as to consist of a single room, that can hold a maximum of ten people; while others are larger and more spacious, some of them quite impressive. 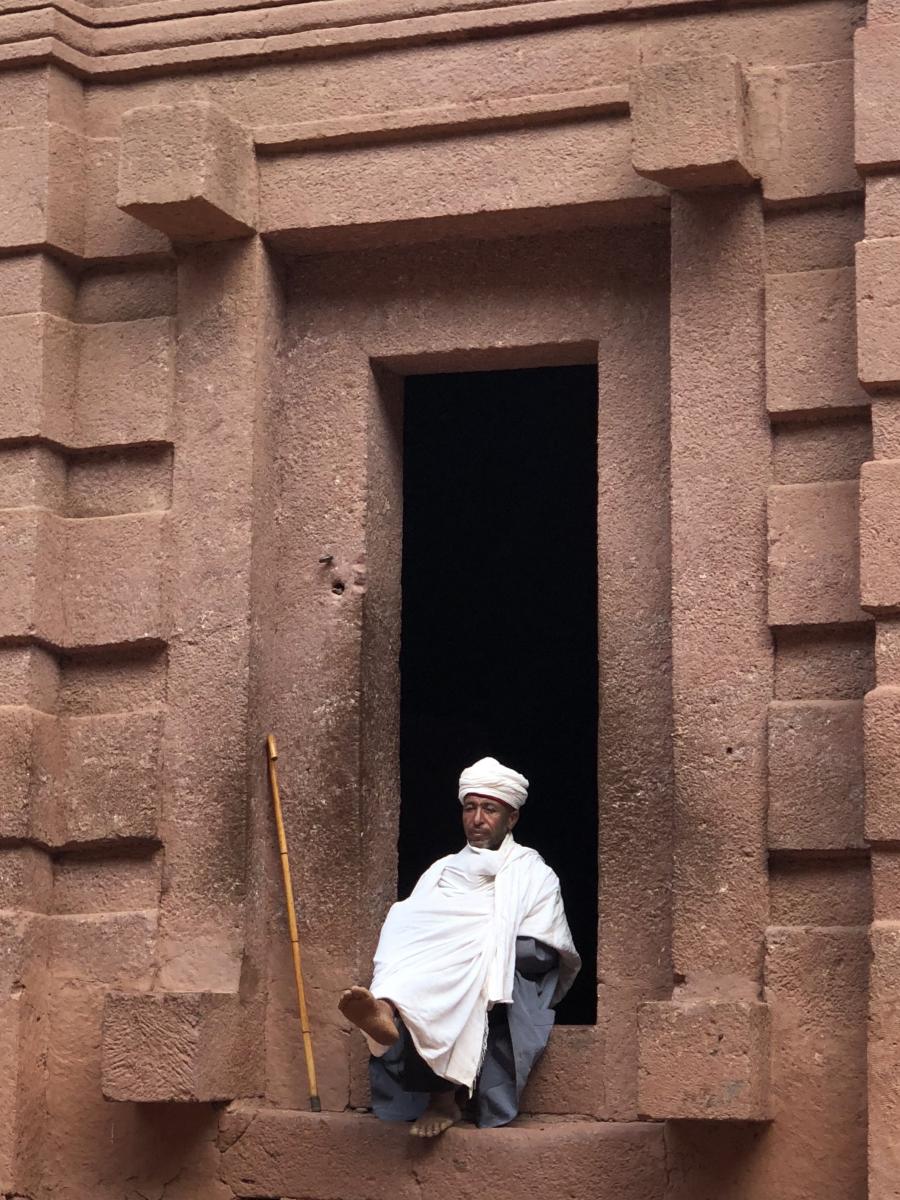 The churches have, in addition to the carved decorations, also numerous frescoes dating back to the time of construction, while the floor is covered with carpets that isolate from the bare rock and allow the faithful to walk barefoot more easily.

All the churches are connected by narrow passages and tunnels, some are dark tunnels dug into the rock, others are narrow fissures in the rock; the underground tunnels are one of the characteristics of the sacred complex of Lalibela.

These are completely dark tunnels in which no form of illumination is allowed because of the sacred meaning they cover: they represent the path from hell to heaven, one passes from the darkness of hell and sin to the light of heaven and divine salvation, rising in the churches.

Today the city of Lalibela appears as a cluster of traditional houses and new buildings, destined above all for tourism, it is a lively city, tourists are numerous and the local people crowd the main dirt road that crosses the city and where the main activities take place, here there are some shops and banks.

On the sides of the road the boys play ping pong and foosball.

The churches of Lalibela are not only works of art and architecture, but they are places of worship still frequented by the faithful, who often come here on pilgrimage from all over Ethiopia.

The faithful wear white and usually go to the churches early in the morning to pray and to visit the churches themselves to meet the priests and receive their blessing.

Since 1968, the religious complexes of Lalibela have been declared a World Heritage Site by UNESCO, that is concerned about the preservation of church restructuring.

The buildings have been dug out of rocks made of compact tuff, this type of rock is quite simple to work, but unfortunately, it is just as easily ruined in contact with atmospheric agents.

UNESCO has thus decided to equip some churches with protection systems, a sort of roof with a tensile structure, precisely to prevent the rains from deteriorating and crumbling.

In the past, unfortunately, a church collapsed and today only ruins remain.

The churches are called "bet" that means "home", a term followed by the name of the Saint or of the Virgin to whom they are dedicated.

Separated from the two groups is the more iconic church of Lalibela, Bete Giyorgis, the House of Saint George, the most scenic, the most beautiful and most famous of all the rock churches.