Of all the churches of Lalibela, in Ethiopia, the one dedicated to St. George is certainly the most scenic and best preserved and is considered the most beautiful by the many tourists who come here every year to admire it.

Bet Giyorgis, that literally means the "House of Saint George", is in an isolated position with respect to the interconnected complexes of the other rock churches of Lalibela; the fact of being by itself is a characteristic that makes it unique and immediately recognizable; moreover it is undoubtedly the most famous and iconic of the churches of this monumental complex.

The Church of St. George was the last, in chronological order, of the churches that are built in Lalibela; legend has it that, once the other churches were completed, Saint George appeared to King Lalibela riding his white horse and reproached him for having forgotten him and for not having built any church in his name.

King Lalibela promised to remedy this forgetfulness and started the work of Bet Giyorgis, it seems that the saint was often present during the construction of his Bet, or House, and the footprints left by his horse's hooves are visible in the mother rock around the church.

The fascinating monolithic church of Bet Giyorgis stands at the South-West end of the town of Lalibela, it is in the shape of a Greek cross, and it is the only rock church with a cruciform plan, the other churches at Lalibela have a square or rectangular plan.

The point from which you can better admire the church is a small hill on one side of the church: from the top you can see the surrounding landscape, the plain of red tuff on which the building is dug, its cruciform plan and also the three Greek crosses carved one inside the other.

The church is surrounded by deep trenches, from the top of these trenches; as you approach the edge, you realize the depth of the excavations, over 12 meters, and you can admire the decorations and windows on the walls of the church.

To reach the base and the entrance of the church it is necessary to go through a narrow trench, about 50 meters long, that ends in a covered passage, that, in turn, leads to a short stairway, that leads to the clearing that surrounds the building.

The church was built by digging from the top down and, as the workers dug the rock, also the decorations and windows, from which they could enter to dig even the interior of the church; here, as in the other churches of Lalibela, there is no type of building material, but the church was built solely of rock.

The state of preservation of the St. George Church is exceptional, thanks also to the hardness of the rock in which it was excavated; the rock walls have only a few yellow stains caused by humidity and molds that stick to the rock but that contribute to increasing the charm of this sacred building.

The monolithic church of St. George is divided into four levels, bordered by cornices, that revolve around the building, on each wall there are ogival windows framed in an elegant bas-relief decoration, the windows are both blind and open, in detail there are 12 windows open on the upper floor and 9 blind windows on the lower floor.

The church rests on a rectangular base about one and a half meters high meaning that the entire building reaches a height of 13 meters; going up the few steps of the base you access the entrance of the church that has a cruciform shape and a vaulted ceiling decorated with a cross.

The church of St. George also houses numerous treasures, whose view is forbidden to the faithful; among these treasures is a wooden box that is said to have been carved by King Lalibela himself.

Each church has its own sanctuary, a sacred area inaccessible to the faithful and closed by heavy curtains; here is the Tabot, that is a representation of the Ark of the Covenant that was believed to have been brought to Ethiopia by King Lalibela.

In the rock that surrounds the church there are numerous caves where mummified ancient pilgrims rest, who came to Lalibela from every part of Africa and who swore to remain for eternity near the church of St. George. 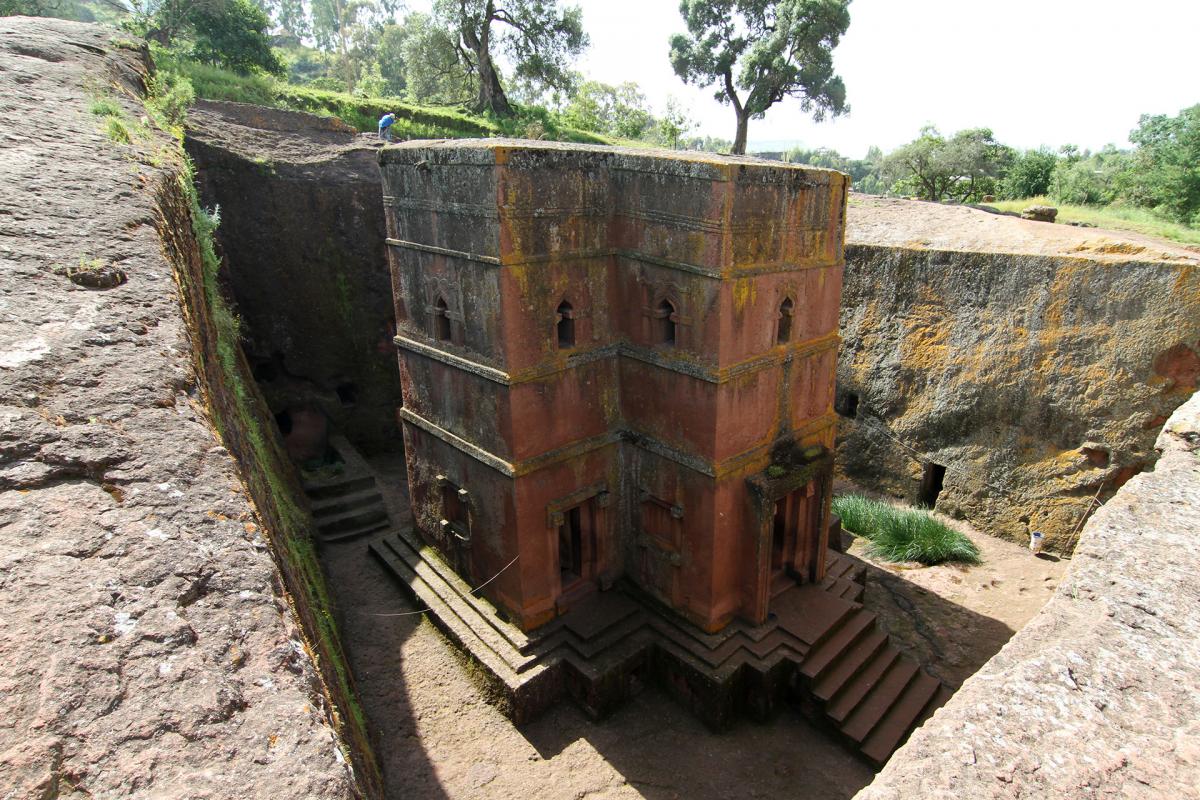