The rock churches of Lalibela are an architectural masterpiece, the representation of a new Jerusalem, built by King Lalibela, that still amazes and enchants today.

The Portuguese friar Francisco Alvarez was the first European to visit Lalibela and was fascinated and amazed by the buildings he had observed.

A small museum, at the ticket office located here at the North-Western group, preserves interesting pieces; the museum guide is courteous and very helpful and illustrates the old manuscripts or the differences between the various carved crosses.

A network of tunnels dug into the rock connects the various churches together.

Most of the churches were arranged on an East-West axis with the entrance facing West and the Sancta Santorum to the East; this orientation has a precise meaning: the believer comes from the Western gate that represents the darkness of sin and evil and advances towards the light of knowledge and salvation.

The first church one meets, entering the site is Bet Medhane Alem; it is accessed via a steep staircase carved into the rock that reaches the courtyard around the church.

Bet Medhane Alem means the "House of the Savior of the World"; this church is considered one of the largest monolithic religious buildings in the world.

The cave church looks more like a giant Greek temple, the rectangular plan is surrounded by a portico supported by 36 huge rectangular pillars; the pillars on the four sides are united in a group of 3 and represent the Holy Trinity.

The interior of the building is divided into five aisles, a central aisle with a barrel vault and four lateral aisles; the five aisles are delimited by four rows of eight rectangular pillars surmounted by capitals and connected together by round arches.

Among the treasures kept in the church there is also the precious cross of Lalibela, made with 7 kg of gold; it is possible to admire it only on Sundays when the priest uses it to bless the faithful who come here.

From the courtyard of the colossal Bet Medhane Alem, through a tunnel, you pass into another courtyard with a trapezoidal shape and vertical walls; here are the three churches of Bet Maryam, Bet Meskel and Bet Danaghel.

Bet Maryam, that means the "House of the Virgin Mary", considered the oldest of all the churches is also the most venerated by the clergy and the faithful; it is a monolithic church and has a rectangular plan of 15 meters by 11 meters and is over 10 meters high.

It is the only church to have a porch and the only one of this group to have two floors; in the upper one, not open to the public, there are treasures and religious relics.

Inside the church is divided into three aisles with two rows of square pillars, the main aisle has a barrel vault, while the two side aisles are smooth; it is also richly decorated and frescoed, above the portico is a depiction of a knight facing a dragon, a tribute to Saint George, while the ceilings are decorated and painted in bright colors.

The windows are of different shapes, in the shape of a Latin cross, a Greek cross, a swastika, a cross of mortar, a cross of Saint Andrew and contribute to making this sacred building fantastic.

In the courtyard there are also three basins dug into the rock, the pilgrims come here because it is believed that they have thaumaturgical properties; the largest of these tanks is intended for sterile women who immerse themselves in the hope of obtaining the desired fruitfulness while the priests accompany them reciting prayers.

On the North side of the courtyard faces Bet Meskel or "House of the Cross", it was built in a cave, this is a hypogeum type building; the front side has two beautiful windows while inside there are four columns that form two aisles.

On the Southern side there is another church dug into a cave, or hypogeum type, it is Bet Danaghel or "house of the Virgins"; it was built in honor of the fifty nuns and novices who were beheaded by order of the Roman emperor Julian the Apostate.

A door next to Bet Danaghel leads to a series of paths and staircases, also carved into the rock, that lead to the other rock churches of Bet Mika’eland Bet Golgotha.

These two twin churches have cruciform pillars, the only examples in all of Lalibela.

The interior of Bet Mika'el, or "church of Saint Michael", has three aisles and is rich in carved crosses in relief; from this church there is a passage that leads to Bet Golgotha, one of the most sacred places in the entire complex of Lalibela, access is forbidden to women and is famous because it preserves the symbolic tomb of Christ and the tomb of King Lalibela.

The interior of the "church of Golgotha" is divided into two aisles and preserves some valuable examples of ancient Ethiopian Christian art, such as some bas-reliefs and high-reliefs depicting different saints and angels and, above all, life-size depictions of the twelve apostles placed in the side niches. 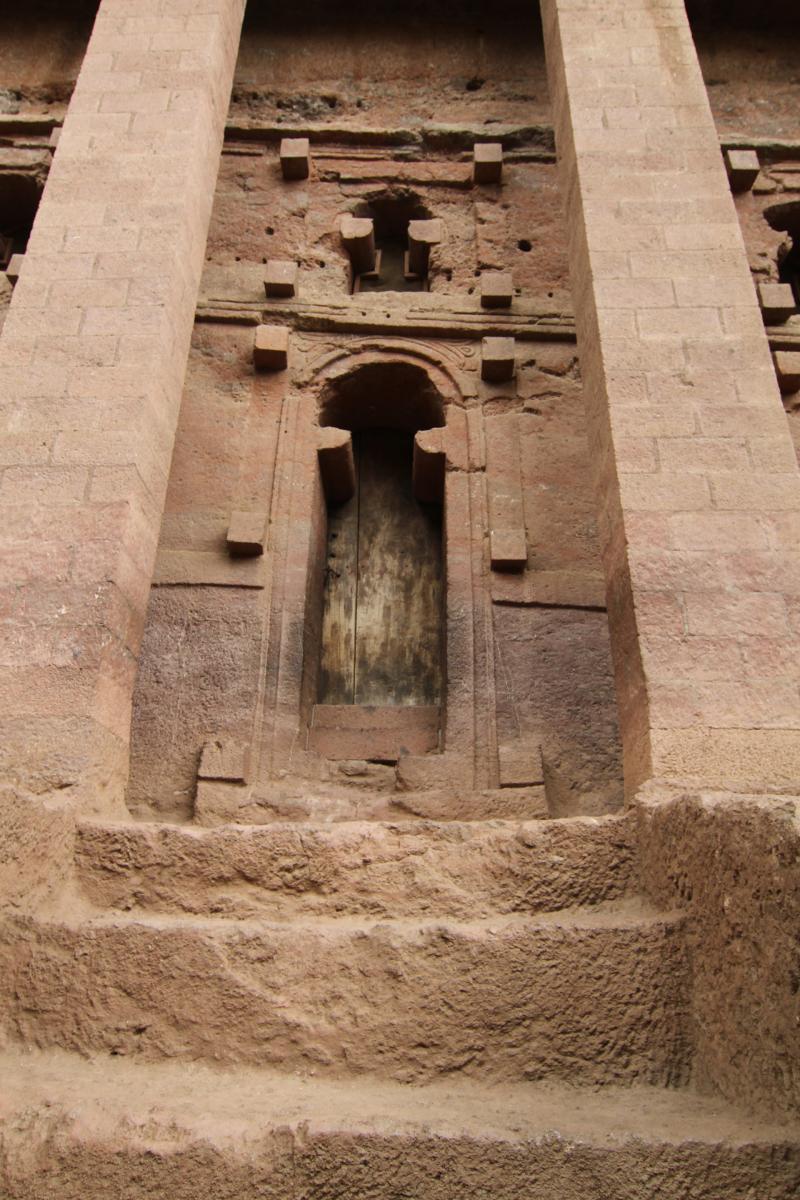