Deprecated: Array and string offset access syntax with curly braces is deprecated in /home/a41t7e0n/exploring-africa.com/sites/all/modules/entity_translation/includes/translation.handler.inc on line 1764
 The rock churches of Lalibela, the South-Eastern group | Exploring Africa

The twelve churches carved into the rock of Lalibela, in Ethiopia, are a living open-air museum and arouse astonishment in those who see them for the first time.

These churches were built between the 12th and 13th centuries, when the Coptic Christians who fled Egypt were transferred to this area of ​​Ethiopia due to persecution by Muslims.

It is said that it was King Gebra Maskal Lalibela who wanted to build all the churches and build a new Jerusalem where the faithful could go on pilgrimage, avoiding the long and dangerous journey to Jerusalem.

The churches are divided into two groups, separated by a canyon where the Jordan stream flows.

A twelfth church, Bet Giyorgis, is located to the East, isolated from all the others.

Visiting the churches of the South-Eastern group it immediately appears evident that the churches, belonging to this group, are smaller but more finely sculpted, compared to those of the North-Western group.

You can walk along a path, which is higher up than the base of the churches and which, thanks to some stone bridges, allows you to go beyond the channels, natural or artificial, that are essential to drain rainwater.

This path has been called "The way to Paradise" and, following it all, you reach the dark passage in the rock, that, in turn, leads to the church of Saint Gabriel or Bet Gabriel.

In reality it is a double church, in fact a door, located inside Bet Gabriel, allows access to Bet Rafael or Rufael, that unfortunately has partly collapsed.

The entrance to the church of Bet Gabriel is in an unusual position, different from the other churches in Lalibela; in fact it is located in the upper part of the church and it is accessed by crossing a stone bridge.

The church of Bet Gabriel on the outside has five large ogival niches, while the interior opens onto high rock bastions.

It is thought that this building was originally a fortified palace, this assumption is based on two aspects: the unusual shape of the building and its orientation, the church is not on the East-West direction like the others.

There are also several legends related to this church, one of these tells how the monks, to shelter some treasures from some invaders, have hidden them in the meanders of this building and that nobody has ever found them.

Another story tells how King Lalibela loved to retire to this church and sleep in one of the excavated cells, he did this as a sign of humility.

Going through a series of galleries and tunnels you reach Bet Merkoriosor Biete Qeddus Mercoreus or Bet Mercurios; although this building bears evident traces of the passing of the centuries, one can still observe beautiful frescoes.

Along the path that leads from Bet Gabriel to Bet Merkorios there are several tunnels, one of which is particularly disturbing: you find yourselves traversing the 35 meters of its length in total darkness; it is said that this tunnel is the representation of hell, the last meters of the tunnel are illuminated by the light that comes from outside and this represents the way to follow for salvation.

Bet Amanuelis undoubtedly the most beautiful and refined church of the South-Eastern group; it is a monolithic church, obtained by digging a single block of rock, that is separated, on all four sides, from the surrounding rock by a long and deep excavation.

This church is 11 meters high and finely carved, so much that some have assumed that it was the private chapel of the royal family; the facades are worked and have three rectangular levels, on which windows open, those on the ground floor in the shape of a Latin cross are particularly beautiful.

The small church of Biete Abba Libanos was created by digging a vertical rocky wall of the mountain: a trench was excavated that isolates the three walls of the church that are inside the rock, while the fourth facade is on the original rock wall, even the roof of the church is part of the rock and has not been separated from the original block.

This is the only one of all the churches in Lalibela to have this particular structure.

The facade has a series of windows that are on three levels, in the lower part there are four windows in the shape of a cross, higher up there are a series of conical windows and finally five rectangular windows located on the top floor.

Legend has it that this church was built during one night, thanks to the work of the angels.

The church of Bet Lehem, the last of the South-Eastern group, was dedicated to Bethlehem and was severely affected by the passage of time. 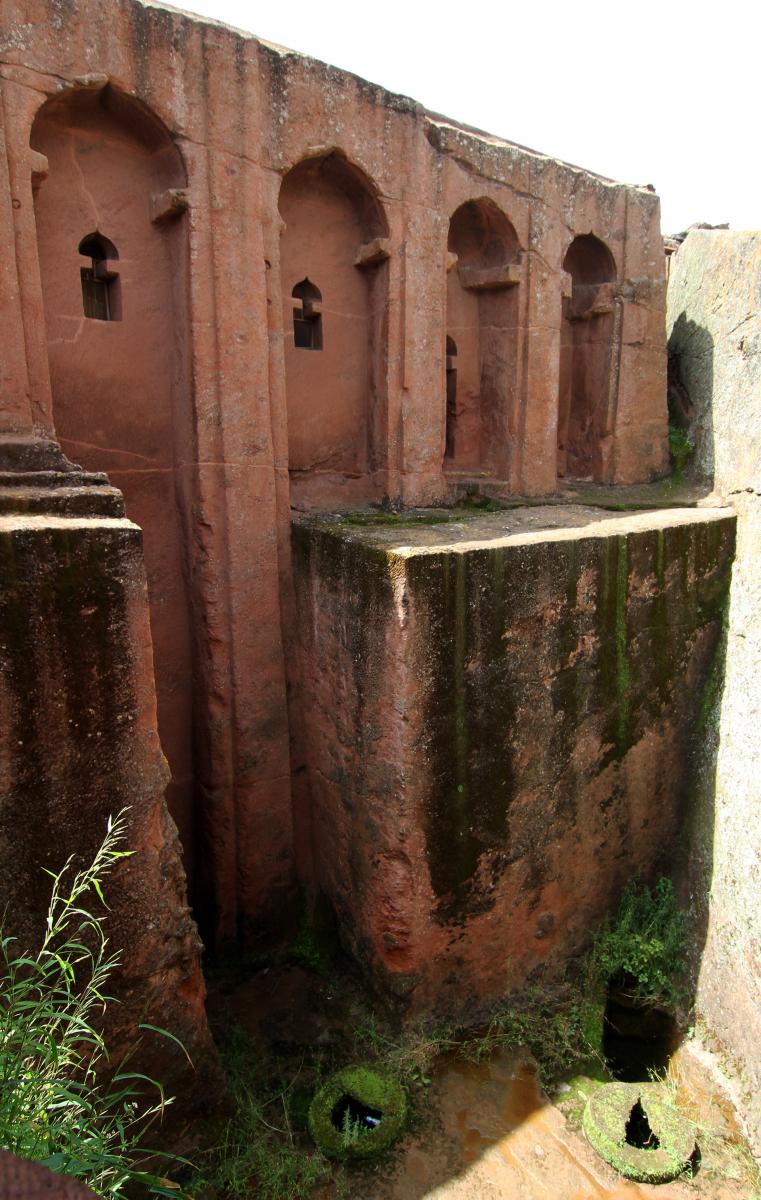