The tribal market of Key Afar

We are at Key Afar, in the South of Ethiopia, and every Thursday there is a large tribal market, it is very important for the locals and there are among the different tribes who go here to sell or buy: the Banna, the Hamer, the Tsemay and the Aari.

This morning we visited a village in the Kara (or Karo) and saw that when we arrived at Key Afar it was lunch time, Jimmy took us to a local place; we have our lunch box but we buy from them the drinks, we are the only tourists and some local people come closer because they are curious to understand where we come from.

While we have lunch, some sellers also come to sell us bracelets made with bullet cartridges; some are smooth, others are decorated, some lighter others heavier.

In the meantime we meet our guide, his name is Shelon, he tells us that his name is so because his mother lived in the mountains when he was born and that mountain is called Shelon.

We ask, both him and the bracelets boy, if they want everything we can't eat, like the boiled egg, potatoes and even a little papaya, and they are happy for this gesture. 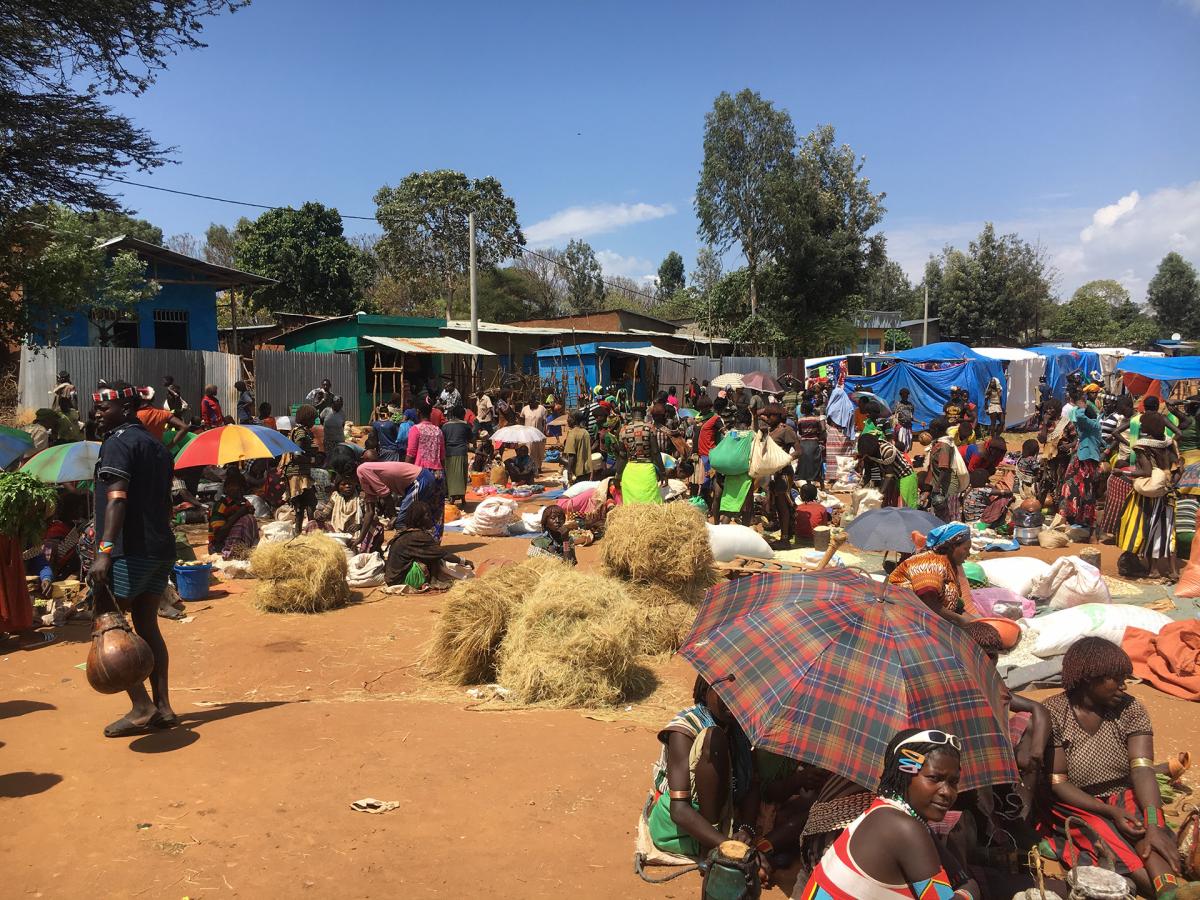 After finishing lunch we set off on foot with Shelon, take a short stretch along the main road and then take a secondary alley, that leads us to where there is a large clearing where the market is.

To visit the market it is compulsory to be accompanied by a local guide who is able to speak with people who, obviously, do not speak English, he is also able to recognize the different ethnic groups and can tell very interesting aspects of these populations.

Sellers and buyers stay here at the market all day and often stop to sleep here before returning to their villages.

Shelon tells us that we can safely take general pictures, but if we want to take a picture of a person we have to pay 5 Birr, that is about € 0.30, well I would say one can do it, they are not exaggerated like in other parts of the world.

I open a parenthesis on this topic that is particularly dear to me: many tourists complain that they have to pay to take pictures of people and call them venial and not very "genuine"; honestly I believe that it's not fun to see the camera in your face every day and be told “Can you smile? Can you favor light? Can you look in the camera?" and if to this we add also the fact that, on average, they have a life of subsistence, while we visitors have a decidedly superior standard of living than theirs, I believe that they are right to ask for compensation or that, in alternative, don't want to be photographed; in the end we are guests at their home and we cannot expect to abuse them and photograph them as if they were animals at the zoo.

As soon as we get to the market we meet the Banna and the Hamer, these two populations are not very easy to distinguish because, both women and men have similar characteristics, that can mislead. 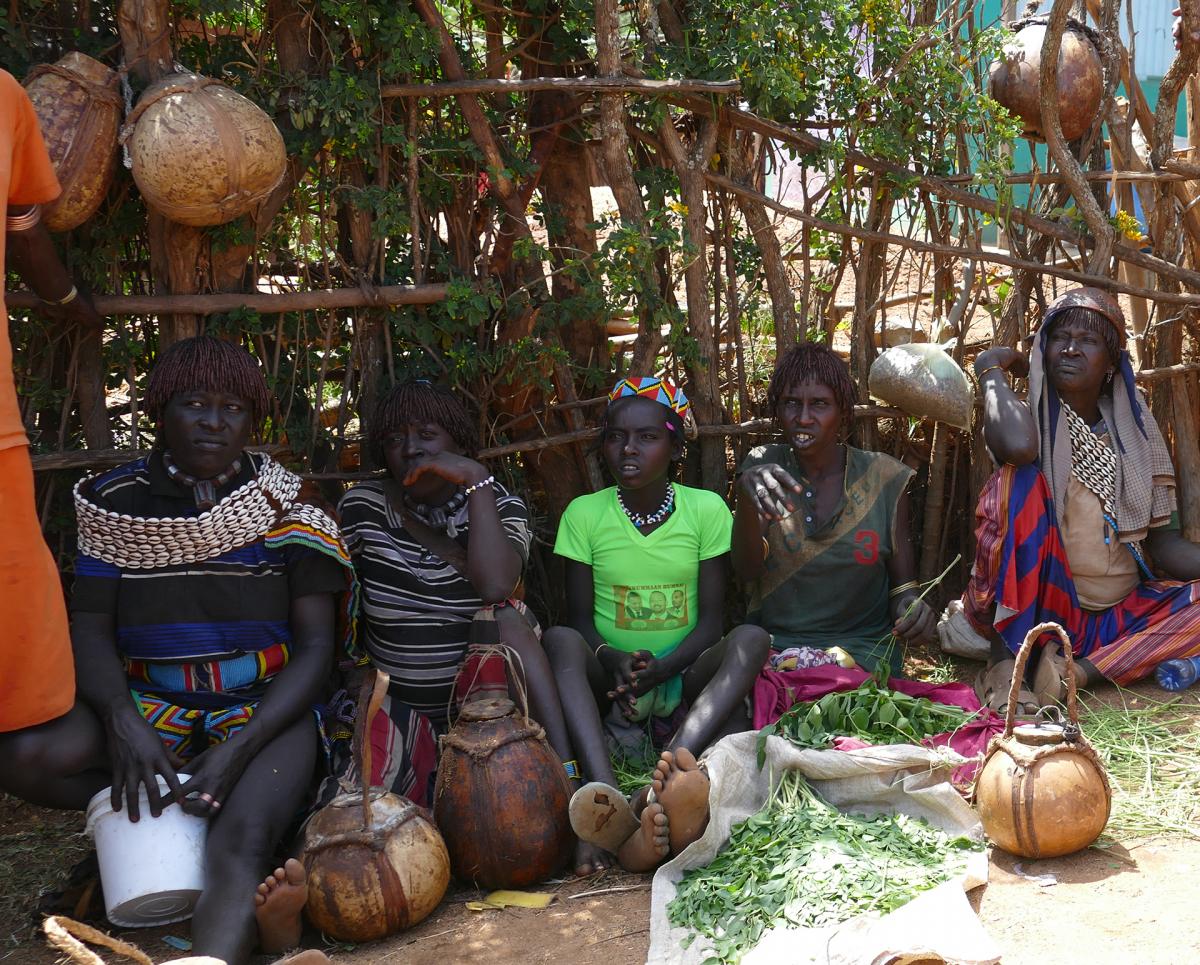 The women hairstyles are very similar, they have a bob of thin braids, the main difference is that the Hamer womenhave red hair, since they treat them with ocher, water, resin or butter, while the Banna womenkeep them of their natural color .

They also differ in the accessories they wear, the Hamer women have metal collars that identify their marital status and even if they are the first or second or third wife; while the Banna women wear colored necklaces but, apparently, they do not have a particular meaning.

The Tsemay women, on the other hand, mainly wear leather accessories on which a series of shells are applied, but sometimes even Hamer and Banna women wear these accessories.

The Banna menhave a particular predilection for colorful accessories that they put on their heads, they use both bands made of colored corals, and plastic clips and glasses; it is above all the boys who have yet to get married who decorate their heads in this way and this to appear more attractive in the eyes of the girls, in our eyes instead they seem a bit funny and kitschy.

Without our guide, however, we would not be able to distinguish the various tribes, because sometimes people have adopted accessories and styles of other tribes and therefore it is not easy to understand them at first glance.

The market sells a bit of everything.

A fairly large area is reserved for those selling fruit and vegetables and other food; usually the sellers are the women.

We meet a small group of Tsemay who sell raw honey, one of the main activities of this population is precisely the breeding of bees to produce honey. 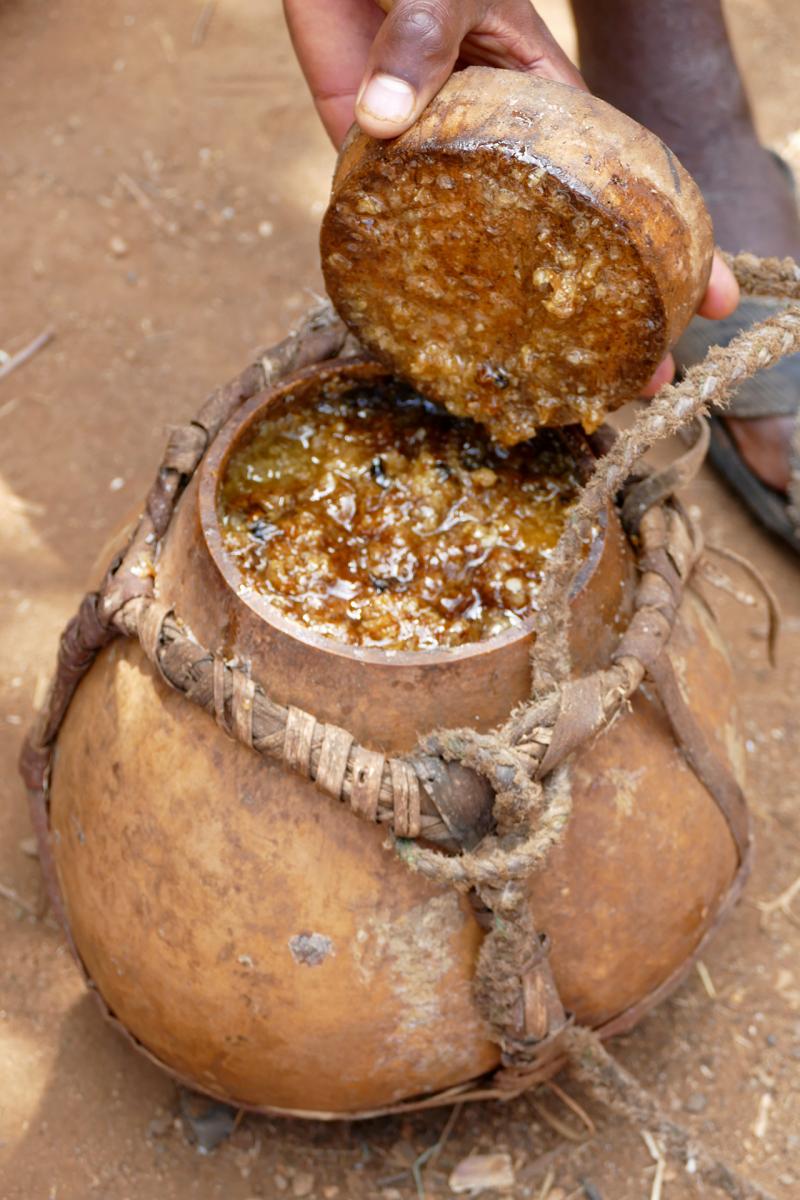 We approach to take some pictures and they offer us the honey to taste, it is definitely very good although different from the honey we are used to.

We see some women selling something that we can't identify, it looks like something dried out, but we don't understand its origin.

Our guide explains that they dry the skin around the coffee bean, that is a production waste, and then use it to make an infusion; we wonder if it's good but we have no way of finding out, maybe it's better like that.

After touring the stalls of the traditional market, Shelon takes us to a secluded street where there are many people, they are all sitting on the ground, in the air there is an acrid smell; they're all drinking sorghum and corn beer, but it's different from the sorghum beer we drank in South Africa from the Zulu or in Togo from the Bassar, this one looks thick and very strong.

Some also have tobacco leaves, but they do not roll them to make cigarettes or cigars, they prefer to chew them or they dry them, crumble them and sniff them.

We continue our tour and we pass by the area where they sell pots and various kitchen accessories, here there are also machetes and various knives; we cross this less interesting part of the market, and then arrive at the souvenir area; here we are assaulted by a series of boys trying to sell statues, baskets and other objects.

They are very nice but they try to sell at all costs, in the end it is basically just us and it is obvious that they are all here. 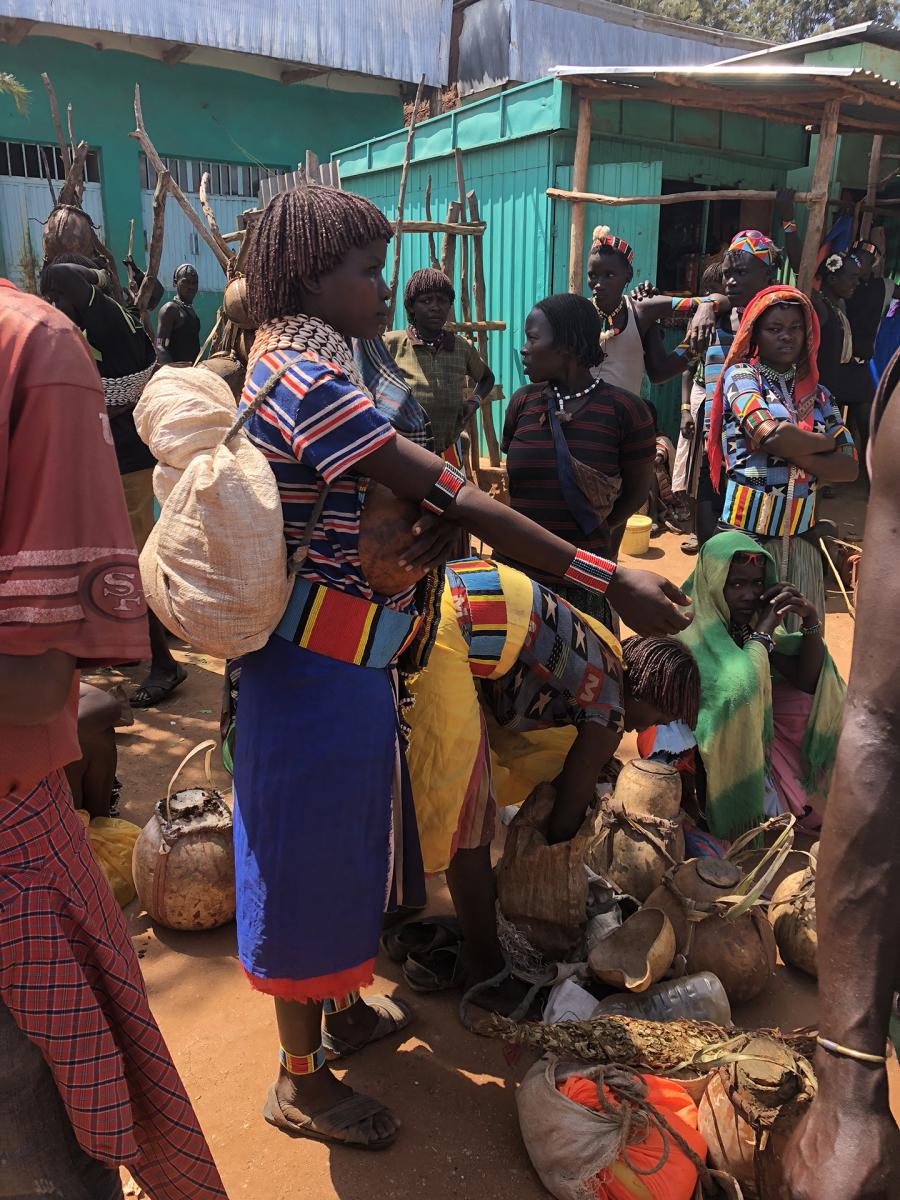 In the end we get two statues representing a Hamer couple and two representing a pair of Mursi; they are beautiful but initially we were shot too high figures, obviously we have to deal with it and obviously I do it because it amuses me, but also because Silvan is always softened too much.

We end up playing the last discount, we're talking about 50 Birr, or € 1.5, even or odd; too much fun, most of the market has gathered around us to see what happens and everyone has fun.

We finish our tour and we are tired because it is really too hot, thank goodness we have brought water, even though it has now become hot; we ask Jimmy if he comes to pick us up here instead of going back to the bar, so we save a little bit of road under the sun.

We get into the car and go back to Turmi, the capital of the Hamer and where our hotel is located; it was a nice and interesting experience to visit this market. 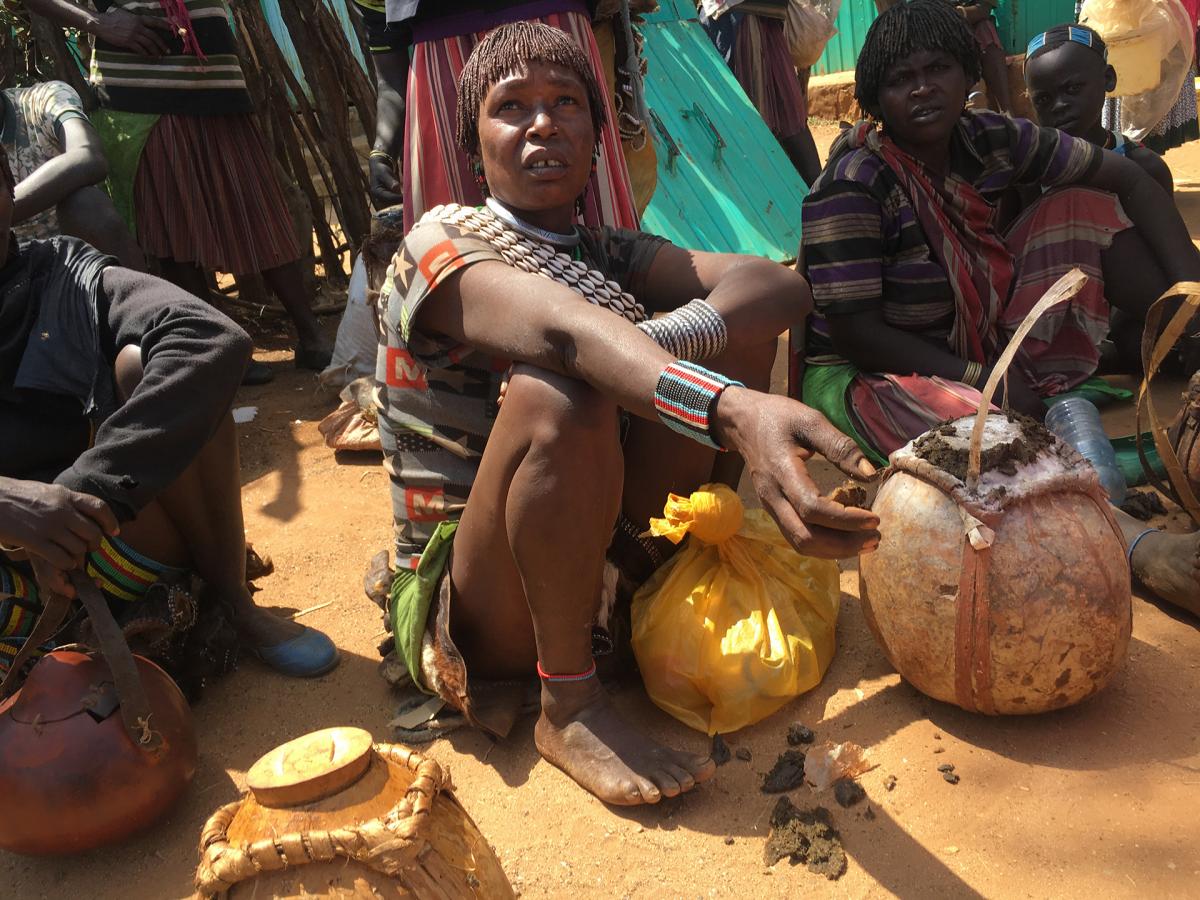