The most important initiation ritual in the Kabyè society is played by the Evala, a ritual fight, a kind of wrestling, that marks the passage of young males to the stage of maturity.

In the past, the fights, that could last for several hours, were practiced using a chicotte, that is a kind of riding crop and a stick, with these two objects the adversaries would face each other hitting each other until one of them failed , exhausted by the blows received.

When he fell, the alleged winner rushed over him and sat on his chest, only at that moment the referee declared the end of the game and its winner.

This system of fight matches began to resolve inter-tribal conflicts, so the fight replaced the war between tribes; today, however, the organization of ritual fights also has a more festive aspect and, at each celebration, a magnificent spectacle is created.

The Evala is an initiation rite, the penultimate of rites in the life of a man, it is certainly the most important and, to prepare for this event, young people are separated from their families for a week, living in special huts, where they are fed and are mentally prepared.

Young people also face a preparation that involves numerous sacrifices that the adolescent must accept: fasting, sexual abstinence and scarification.

Before starting wrestling, participants must make a pilgrimage, that consists of climbing three mountains; those who do not complete the pilgrimage will be initiated into adulthood.

Before the match each competing family performs some ancestral worship rituals, invoke the spirits of the ancestors who dwell in the clay statues placed in the courtyard of the housing complexes, each statue represents an ancestor.

The elder of the family speaks with the clay statues as if he was talking to a member of the living family, invokes the ancestors who live in the clay, and pours a libation as an offering.

The sacrifice is part of the ceremony and the numerous feathers that cover the clay statues are the result of these repeated acts of worship.

For large events such as the Evala, the clay statues are carefully and respectfully removed from their niches to be worshiped; if a white rooster flaps its wings, people believe it is a benevolent sign of the ancestors.

The women prepare a local dish, based on yam and manioc, that will be served to the wrestlers after the match.

There are offers of libations to the ancestors, together with a bowl of corn wine, so that they can help and protect the family, this is a very solemn moment of the entire ceremony.

At this point the actual ceremony can begin, the main purpose of this ritual is to make the young man hard, brave and stoic and consecrate not only the transition from adolescence to adulthood, but also the affirmation of his Kabyè cultural identity.

The consumption of dog meat is a central and essential element of the Evala ritual, for the aspiring Evalou, this consumption is not a choice but rather a prescription necessary for the fulfillment of the initiation rites, the initiate is forced to consume dog meat to acquire the qualities of this animal: resistance, tenacity, strength and intelligence.

A teenager has to fight for three consecutive years, starting from the age of 18, before he can be considered a man, the fights involve two teams composed of 4 or 5 wrestlers who face bare-chested, under the eyes of their parents, friends and onlookers who encourage them with songs, shouts and sounds of horns.

The wrestlers are sprinkled with white powder, a symbol of value, and fight until sunset, giving their best, whether or not he wins, the tribe recognizes the initiate as a man, a young man who has never fought is not considered an adult, especially not among his peers.

After several stages of confrontation between the teams, the winners can be proclaimed according to the number of victories, the presence of wise men of the community ensures respect for the rules, and the arbitration of the fights, also reveals the strong traditional aspect of the ceremony.

Successful wrestlers are invited to the chief's house to wear their red berets; men with red berets are called "warriors", ie the best of all fighters.

The Red Cap dance is considered a symbol of maturity and courage in the men's initiation ceremony.

At the end of the Evala, the traditional priests and the feticheur make a tour of the sacred places, above all the sanctuaries that are found in the forests and in the caves, to thank the ancestors for allowing a good performance of the initiation rites.

At the end of the Evala rites, the young man takes a new social status with rights but also obligations including: the right to exploit the land on his own, to marry, to defend the village in case of aggression.

The Kondona, are ceremonies that begin the day after the closing of the Evala, the young initiate, who has completed his three years of fight, becomes an Ezoukpo, a sort of middle class and can aspire to become a Kondo or adult.

His head will be shaved, a necklace will be put around his neck and he will be given a gong.

The ceremony consists of a dance and a climbing in the mountains, where the boys will have to play the gong.

The ceremony covers boys between 22 and 26 years of age, and this initiation ceremony is a real test to allow young people to integrate with the adult class, giving them quality and dignity; if they are successful, they will have the power to take part in decisions concerning the life of the community.

Through this dancing ceremony the boys are adorned with animal skins and shells and wear a heavy headgear of cattle horns covered with chicken feathers.

For the dancing ritual, men must demonstrate their strength, their endurance and their ability, dancing for as long as possible and better than their peers, also they must run by choosing the most difficult paths up and down the mountains around their village, moving from house to house to the residence of the chief.

The centerpiece of these ceremonies is the village of Farende in the Kara region, in the North of Togo; Farende is known as the cradle of the tradition of the Kabyè, because, unlike other places in Togo, where traditional ceremonies and practices are beginning or continue to fade, here the tradition is still very present and practiced. 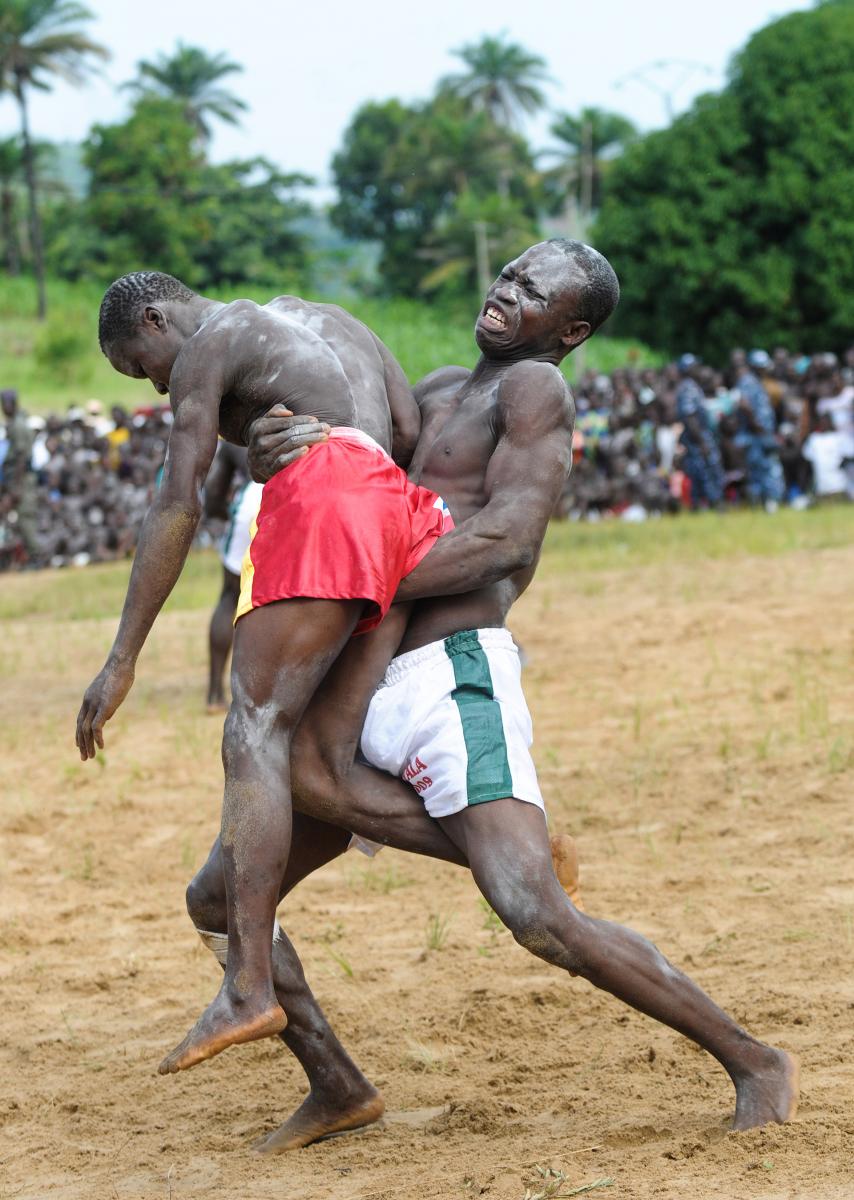