It has an extension of 129,449 sq km, less than half the size of Italy, and about 6 million inhabitants, two-thirds of whom reside in Cape Town or Kape Staad.

It is a region that is very diverse from a cultural and environmental point of view and has a lot to offer to travelers who, too often, only visit it superficially.

The coastal part of the province, due to the influence of the two ocean currents, Agulhas and Benguela, has a climate similar to that of the Mediterranean, with rainy winters and sunny summers; while the Northern and internal part of the Western Cape has a semi-arid climate with dry winters with cool nights and torrid summers.

Cape Town is the capital and often one of the few places to be visited, indeed this heterogeneous city deserves a visit and it is always a pleasure to return.

Not to miss the Table Mountain, the Waterfront, the Bo Kaap neighborhood and the beaches that are not far from the city; but Cape Town is a great base to explore much of the Western Cape.

First of all, the Table Mountain National Park, that was established in 1998 to protect this cape covered of fynbos and that includes the Cape Peninsula; a rocky peninsula, stretching across the Atlantic Ocean to the South for 52km and hosting an incredible biodiversity.

It is possible to travel by car to the Cape Peninsula, there are several points of interest including Boulder Beach, the beach famous for its penguins and the Good Hope Cape or Cape Point, for centuries mistakenly the point where the Indian Ocean and the Atlantic Ocean meet as well as the Southernmost point of the continent; there are also several walking routes, paying attention to the baboons, that are particularly aggressive.

Since 2004 the waters lapping the Cape Peninsula are protected, including the False Bay, that lies to the East of the peninsula.

Moving East from Cape Town you can go on the Garden Route, the original route would be the Cape Route 62, but each traveler chooses its own route along the coast or inside, according to its own interests

Hermanus definitely deserves a stop, especially in the months of June to the beginning of December when, in the bay ahead, it is possible to spot the Southern right whales and the humpback whales; a spectacle of nature.

During this trip we visited Hermanus in one day from Cape Town because we wanted to try to see the whales, that in this period are heading here from Antarctica to give birth; the Walker Bay waters are warmer and therefore are perfect for weaning the puppies before returning to the freezing Antarctic waters.

It was exciting to see these wonderful animals swim in the waters in front of Hermanus, one of these whales made a series of spectacular jumps; you can not be impressed by their beauty and elegance.

Continuing Eastward from Hermanus you can reach the Southernmost point of the African continent, where you will meet the Indian Ocean and the Pacific Ocean: Cape Agulhas; or you can visit the various natural reserves that are in this area.

Another stop not to miss is the beautiful Knysna town that is a good base for exploring the surroundings, such as the wonderful Garden Route National Park born from the merge of three national parks: the Knysna National Park , the Tsitsikamma National Park and the Wilderness National Park.

We went through the Garden Route on a previous trip in January, passing also by Swellendam and Oudtshoorn; it's a trip we loved because of the wild and varied nature: from the beaches to the forests.

To the North of the road leading from Cape Town to Hermanus there is the area of ​​vineyards that produce wines that, especially in recent years, are conquering the world scene; the most famous town is Stellenbosch, but wineries and vineyards are also found in Franschhoek and Paarl.

You can visit this area on a day trip from Cape Town or you can decide to go without a definite destination among Cape Dutch-style towns where time seems to have stopped and visit the wineries to taste some good wine.

Also from Cape Town starts the N7, heading North and leading to Namibia, along this state road, taking deviations and losing track on secondary roads, you can find spectacular and little-known places that deserve to be explored.

We have traveled this part of the Western Cape off the Kgalagadi Transfrontier Park, across the Northern Cape.

We stopped at Clanwilliam, a relaxed town built in Cape Dutch style, typical of this area of South Africa; here the rooibos tea is produced and Clanwilliam is known as the world capital of this delicious caffeine-free tea and with so many properties.

In town there are two houses where you can taste the rooibos, natural or flavored, and where you can buy different products made using this plant; the town is small and we have visited it in half day.

In the area of ​​Clanwilliam you can explore the Cederberg Range, or you can easily reach the Atlantic Ocean with its beautiful white beaches and majestic waves, or, especially in the spring, you can explore the surroundings to admire the blossoming of wild flowers that during these months, thanks to the spring rains and the mist that is created on the ocean, flourish by giving birth to a color show where, usually for the rest of the year, there is only semi-arid soil with some shrubs.

We are looking for wild flowers, the best time to see them is from mid-August to mid-September, but if spring rains are early, they start to bloom in early August and can often be seen until mid-October; but the rains and the sun, that in contrast to the cold water of the ocean create the fog, play a crucial role.

In the street we are alone, the sun shines and the landscape around is spectacular and bucolic, we could not ask for anything better.

We visit Lambert's Bay and Eland's Bay two villages overlooking the Atlantic Ocean and on two white and deserted beaches; how nice to feel the scent of the scorching air while we enjoy the sun.

This area is very nice to explore by bike or motorbike, there are plenty of bed & breakfasts and several apartments to rent like what we've taken.

Descending along the N7, you depart from the Cederberg Range and the landscape becomes less mountainous but equally fascinating; even in this area we decide to abandon the main road and lose ourselves along the secondary roads, always in search of the blooms; many have given us advice on where to find them, we took notes and started searching.

The closer we get to the coast and the more we find wild flowers, what a show!

Close to Langebaan is the West Coast National Park, that we have pointed out as one of the places to find the blooms, but the park deserves to be visited all year round for its panoramas.

There are no felines, but only herbivores like elands, mountain zebras, bonteboks and other antelopes, in the park you can go biking and you can also go hiking.

The park is located between the Atlantic Ocean coast and the beautiful Langebaai lagoon, protects a stretch of unspoilt coastline and a marshland where there are several water birds; there are also different types of fynbos in the park, some of which are very rare.

A U-shaped road runs through the park, following the shape of the lagoon, to reach Kraalbaai, a scenic spot on the lagoon; hence the view is spectacular; turning to the right you reach Tsaarsbank that is located directly on the Atlantic Ocean, here are some very scenic rock formations where the waves break.

Both in Kraalbaai and Tsaarsbanksi there is a picnic area and access to the respective beaches that, being in a national park, are uncontaminated and lacking facilities, but it is still possible to take walks and swim.

During the flowering period, you can also access the Postberg Section, usually open only in August and September; here the lower vegetation allows easier sighting of animals.

We spent the day in the park in touch with spectacular nature, and here we have found many wild flowers, thanks to the humidity from the ocean; we also saw animals that we had never seen before, like the bontebok and the Cape mountain zebra.

We exit the South gate and enter the R 27, the road that runs along the coast and that, after about 100 km, took us to Cape Town.

After spending a few days in Cape Town, we took the N1, the road longitudinally crossing South Africa from South-West to North-East; we cross the townships and then find ourselves in the middle  of nature on the mountains.

We are heading to the Karoo National Park, located in the wonderful semi-desert area of ​​Karoo.

Here are several promontories, that have been eroded over the millennia by the atmospheric agents and the strong thermic excursions of this area: they are very photogenic.

We drive this road that runs in this place that looks inhospitable and, after five hours, we arrive at the entrance of the park.

The Karoo National Park is not much visited, the few travelers we encountered are South African; it's a shame because it has spectacular landscapes inside it.

There are several itineraries that can be reached by car, most of them though require a 4x4; one of them climbs the Klipspringer's Pass, giving wonderful views of the valleys and the surrounding area.

The park covers an area of ​​750 sq. Km, it houses 58 species of mammals, over 200 species of birds and many reptiles, including several species of snakes, geckos, lizards, skinks, agames and turtles; thanks also to the different altitudes present.

In this area, fossils dating back to millions of years have also been discovered, the Fossil Trail leads visitors to their discovery.

We only spent one night in the Karoo National Park and this is the last stop of this wonderful trip that has led us to discover amazing and unbelievable places.

One of the greatest surprises of our trip has been the Western Cape, a region with a striking and varied nature that, in large part, is still too little known. 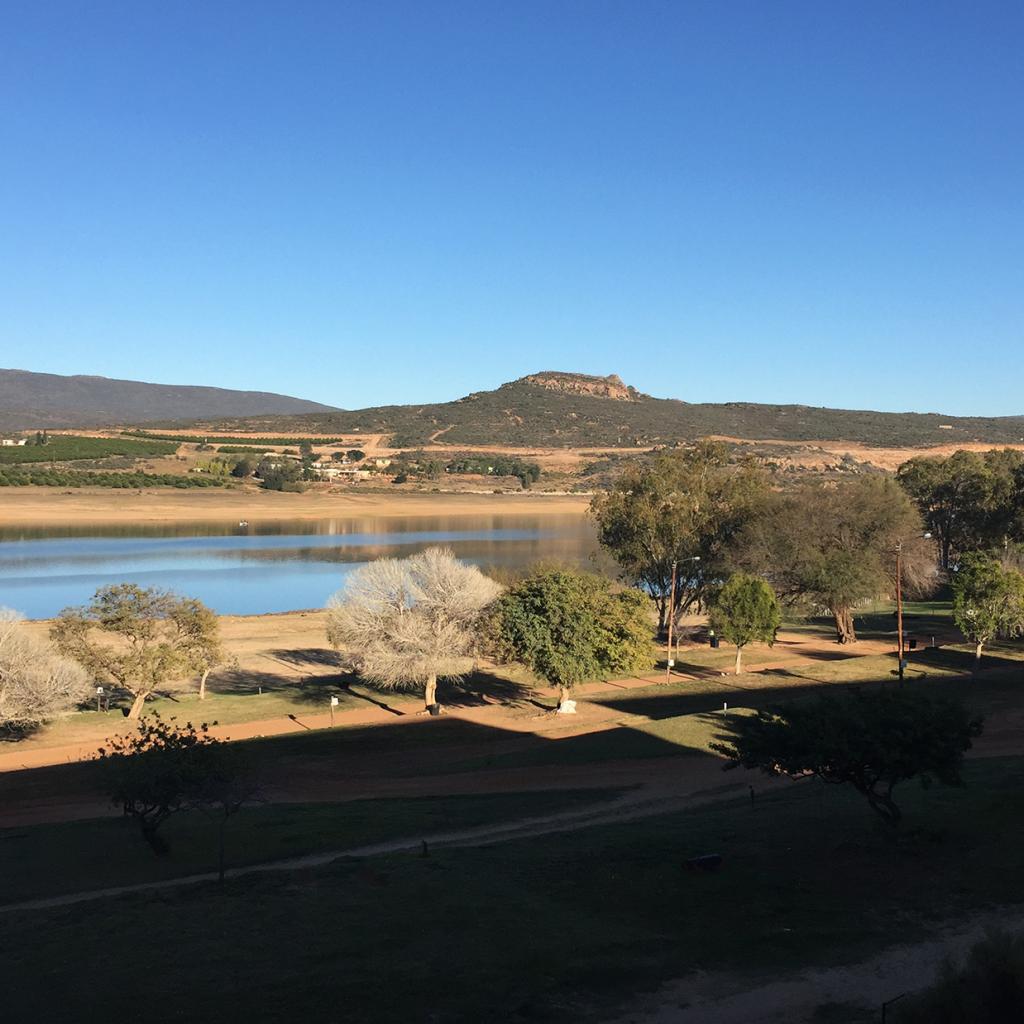