Swakopmund is a relaxed and relaxing town on the edge of the Skeleton Coast desert, in the past it was a German enclave and now it has become the crossroads of Namibia travel routes.

The city was founded in 1892 when the Germans landed on the Namibian Atlantic coast to build a commercial port.

Swakopmund stands at the mouth of the Swakop River, whose name means "at the mouth of Swakop" in German; but this town has not only its German name in fact it also preserves many buildings, magnificent examples of German colonial architecture.

Walking through the streets of the center you can admire several well preserved buildings, that make you think more of the Romantische Strasse than of Africa; the sloping roofs, the churches with stone belfries, the breweries and the names of the streets written in German Gothic style certainly do not help to convince you to be 8,000 km far from Munich.

Among the most important examples of colonial architecture there are the old railway station, now transformed into a luxury hotel, the municipal library, housed in the Wormannhaus building, and the Hohenzollernhaus.

Swakopmund now bases its economy on tourism, in the past it was the port that represented the engine of the economy, and the nearby uranium mine boosted demographic growth and also the city wealth.

Compared to a few years ago, Swakopmund has seen growing business activities aimed at tourists, new restaurants, new hotels, modern cafes and many good craft and souvenirs shops have been opened.

Swakopmund is also a good base for refueling before restarting the trip, both Northward, across the Skeleton Coast and South, to the Namib-Naukluft Park, to admire the Sossusvlei dunes.

We roam around the center looking for some unusual handicrafts, although we know very well that we will eventually buy as well some nice souvenirs.

In the morning the air is cool and the mist makes it damp, causing even lower temperatures; we park near a commercial area, transformed into a pedestria island, and we immediately notice a brand new cafe with an eye-catching concept, it seems to offer coffee and cappuccinos worthy of the best Italian bars, we should try it!

Our coffee smack is not betrayed, the cappuccino is made to perfection and the biscuits accompanying it appear to have come out of a London pastry, the large windows in this cafe overlook the lighthouse; it's not a bad start of the day at all!

The sun struggles against the fog while we fight against the unrestrained desire for shopping, the space on board of our car, but especially in our suitcases, is very little so we cannot overdo it, though some sculptures are too beautiful not to be bought and so at the end of the morning we have a series of bags "sex and the city" style.

A little less fascinating is the shopping at the Pic'n'Pay but definitely much more needed, we mainly stock water and drinks; the next stop is Windhoek and then we will venture into the Kalahari.

We also take a ride on the beach, where there is a pier that stretches out to the ocean,it  is very photogenic; next to it there is a restaurant that has a spectacular glass window on the Atlantic Ocean; a few years ago, not far from here, there were the remains of a very scenic wreck, unfortunately, however, today it is no longer there, most probably it has been removed.

On the one hand it is a pity because it was a perfect subject for being immortalized in some fog-wrapped photographs, but on the other hand we are glad that the environmental impact has been limited by removing a wreck filled with oil and fuel.

In this area of the ​​"Bavaria of Africa" there are excellent pubs, the atmosphere is the one of the Oktoberfest, the beer is very good and the dishes are excellent, this time we opt for the Brewer & Butcher betraying our favorite, the Swakopmund Brauhaus.

The Brewer & Butcher environment is more modern and less "old Bavarian" than the Brauhaus but the on site distilled beer is great; it is located within a luxurious hotel, The Strand, overlooking the ocean and in the daytime offers a nice terrace for dining.

Swakopmund is therefore not only a convenient technical step during a trip to Namibia, but is an interesting place to spend time relaxing, and for those who want to do many activities including numerous extreme sports.

Auf Wiedersehen Swakopmund, next time we will be in the area we will definitely come back! 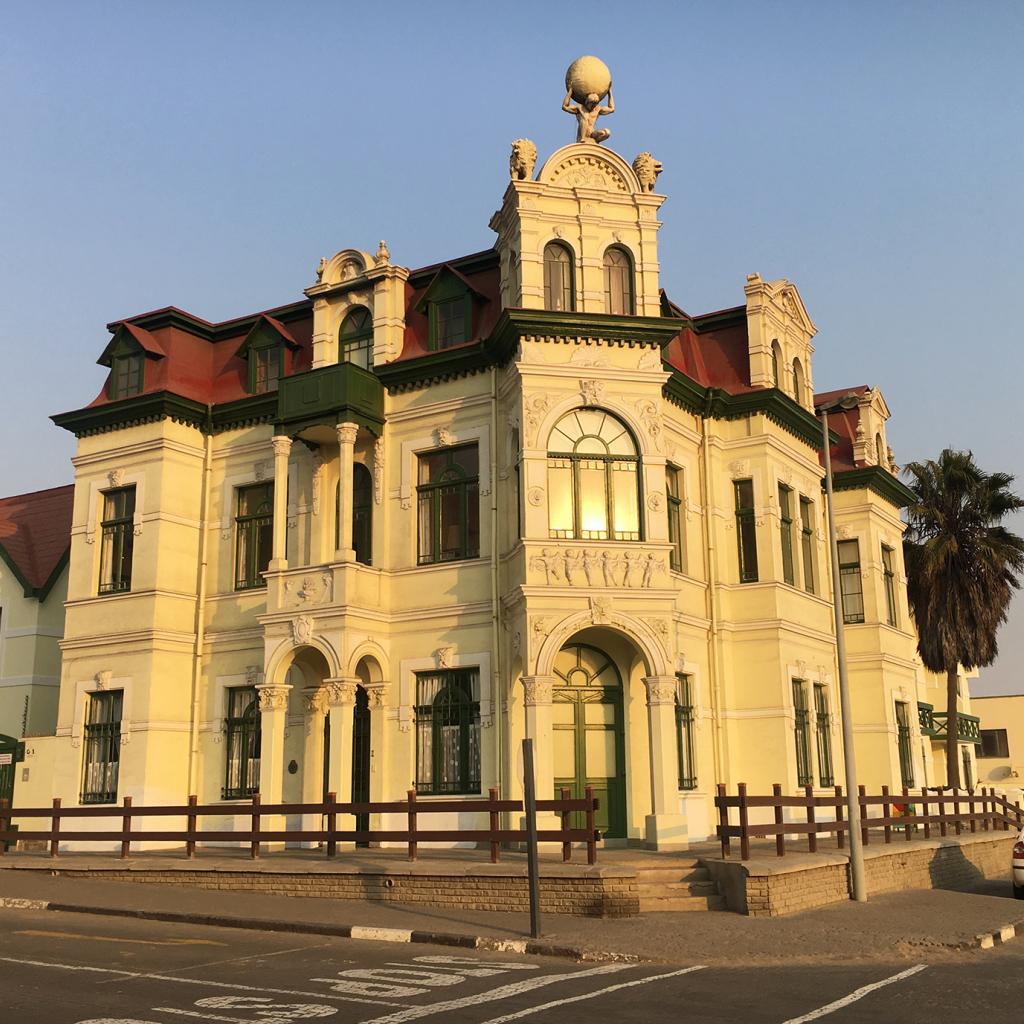