The Moremi Game Reserve is located in Botswana and covers an area of 5,000 sqkm, almost one third of the entire Okavango Delta.

The Moremi is the only protected area of the entire Delta ecosystem and is of great environmental importance since it contains all the ecosystems in the Delta, since its borders have been extended to the present area .

The habitats present are many and different from one another: from muddy wetlands to mopane forests, to alluvial plains and prairies.

The reserve consists of two main areas: the Mopane Tongue and the Chief Island; both have a high presence of animals, one of the highest concentrations of the entire continent, and this contributes to making the safaris in the Moremi exceptional.

We have visited the Mopane Tongue, the only Moremi Reserve area, that can be reached by 4x4.

We left from Maun and for the first 80 km, ie up to Shorobe, we drove on a paved road, from then on the road becomes dirt, but has a hard and compact bottom and is therefore easily accessible with an off-road vehicle.

We overcome the veterinary fence, that divides the area where the livestock is located from that where wild animals are found, and we continue our journey; we head to Xakanaxa, the most North-West part of the Mopane Tongue peninsula.

We enter the Moremi Reserve from the South Gate and proceed along the main track, driving slowly since we could meet some animals on our path; in fact, right in the middle of the road, we find an elephant that quietly crosses and then stops near a bush, where it began to eat some leaves.

We spend about 4 hours from Maun to get to Xakanaxa, we enter a second gate, only those who reside in a tent camp or in the camping at Xakanaxa can make safari in this area; while all other areas of the Moremi Reserve can be safely visited.

We have decided to stay at Camp Moremi these days, it is a structure that we know well since we have been here in the past; it is located in the dry part of the reserve but overlooks a canal where boats can be found for safari boats.

For these two days we decided to leave the campsite and get a bit pampered.

We arrive at lunchtime and are welcomed by one of the managers; while we have lunch, we can see all the activities available, but we are only interested in game drives; here sightings are usually spectacular and we have high expectations.

In the afternoon we set off for our first safari, throughout our stay here we share the car with a pair of North Americans from Colorado and a couple of Germans from Cologne; they are all nice, we were lucky.

First of all we go not far from the camp, our guide, Grass, knows a leopard has a prey on a tree and we go see if we spot it.

When we arrive we find the leopard, a young female of three years, on the branch engaged in eating the prey; what a show, even the light is perfect; during our safari we have met this wonderful leopard several times, always in the area near its tree.

The Moremi Reserve never disappoints and this was just the beginning.

In the four safaris we participated in, we did exceptional sightings, the one that most excited and made us happy were the wild dogs.

We looked for them so much during our safaris around Africa, without ever having seen them, so it was really an indescribable happiness when we saw them; besides, wild dogs are a species threatened by extinction, a bit due to the loss of the habitat and also because it usually succumbs confronting other predators, such as lions.

When we saw them the first time they were hunting, a pack of 10 wild dogs that moved fast on the territory, relieving one another in search of a prey; we followed them for a while, keeping them to the right distance so as not to disturb them in their business.

Then we found them resting, sitting or lying on the grass; they are wonderful with their varied mantle and their large ears, that move in all directions to seize even the most imperceptible noise.

We saw them once again briefly, always engaged in hunting.

We also saw beautiful lions, a male and a female that were just mating right next to the landing track of the airstrip.

We have certainly not missed the sightings of herbivores as impalas, present in large numbers, buffaloes, greater kudus, red letchwes; we also saw the elegant giraffes and we witnessed the struggles of a group of young male giraffes, they seemed to work in the gym trying the moves, it was really an exceptional sight.

Even the sightings of birds have not disappointed us, here you can see both terrestrial species, such as francolins, and aquatic species such as storks, cranes, geese and many others; obviously, there are birds of prey as well.

There are several Nile crocodiles and many hippos in the marses and wetlands, that usually spend their days in the water, then go out at night to browse; they are present a little everywhere, so in the evening you have to pay a bit of attention and do not move alone in the darkness inside the tent camp, better to be accompanied by the camp staff.

Even the landscapes of the Moremi Reserve, especially in the Xakanaxa area, are spectacular: here the area varies greatly, from the mopane forest to the islands, that are partly submerged by the floods of the Okavango, the alluvial plains, the marshes and the swamps.

During our stay we visited Veronica Island, Marula Island and Dead Trees Island, the latter being called so since there are many mopane trees, that are dead as the flood of the Okavango, that has partly changed course in the last decades, has covered them with water, killing them; a landscape at the same time ghostly and fascinating.

The flood of the Okavango, fueled by summer rains, especially in January and February, on the Angolan plateau, reaches the Okavango Delta during June and July, just during the dry season; this makes the delta become an important and vital source of water for animals that come and concentrate here from the surrounding areas; this is one of the reasons why the dry season, from June to October, is the best time for photographic safaris.

After spending two days here at the Moremi Reserve in Xakanaxa, it is time to leave again; on the one hand we would still love to be able to admire this spectacular nature, but on the other we want to take our car and continue our journey, we still expect wonderful places to visit.

In any case we know we will soon return to the Moremi Reserve, it is one of the places we love more all over the African continent. 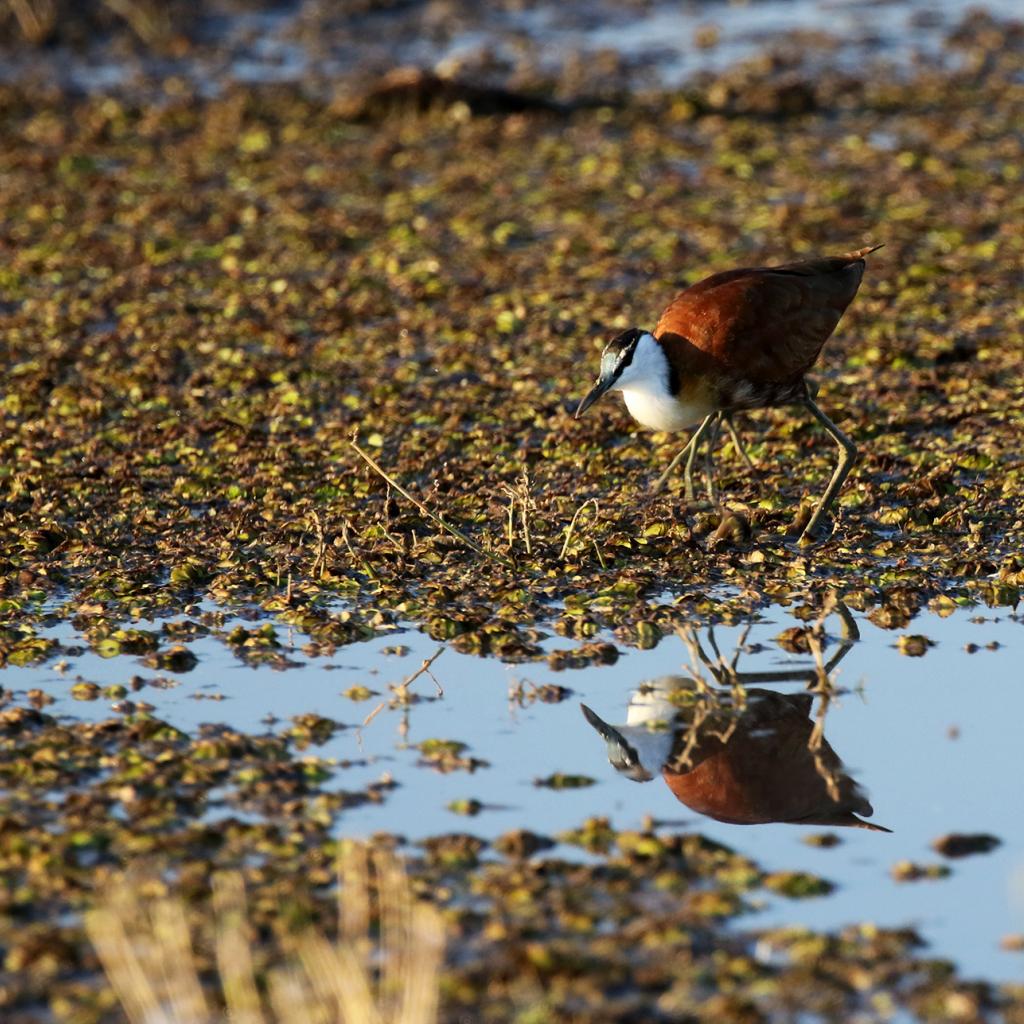