Kubu, or Lekhubu, Island is in the Sua, or Sowa, Pan, that is part of the Makgadikgadi Pans complex in Botswana; this is the largest salty lake complex in the world and covers an area of ​​about 12,000 sq. km.

During the rainy season, if it is abundant, some of these salty basins fill with water and give rise to temporary water mirrors, particularly in the North, where they are fed by some rivers; while during the dry season the water evaporates, leaving a crust of salt on the bottom that prevents vegetation from growing.

The Sua, or Sowa, Pan meaning "salt" in the Setswana language, is located in the Eastern part of the Makgadikgadi Pans complex and is separated from the Ntwetwe Pan, located in the Western part, by a strip of grassy ground elevated compared to the salty depressions.

The first European to have mentioned these places was David Livingstone, who crossed these lands during his expedition; from those times here little has changed, these places have kept that magic and primitive beauty that so much impressed the well-known explorer.

Kubu Island is located in the Western part of the Sua Pan and is an enchanting place, when we discovered its existence, we immediately wanted to come here.

We come from the South, from the Khama Rhino Sanctuary near Serowe, and before from South Africa; so we pass through the town of Letlhakane, that is a good base, the last, to make supplies and fuel, before venturing into the Pan.

From here a secondary road goes North, the first 12 km are paved, after that the asphalt leaves place to the dirt road at last!

The bottom of the track consists of thin, white sand, these are the shores and the beach of the lake, that is supposed to have been here millenniums ago; next to the track there are several shrubs.

After about 25 km we cross the village of Mmthumum, immediately afterwards there is a wooden building, it is a panoramic tower built to allow people to see the salty expanse; we climb and in front of our eyes opens a spectacular view, we look forward to arriving with the car on the salty depression

We go ahead and soon after, there is, in front of us, an infinite salty expanse of almost blinding white; fortunately today there are some clouds otherwise the sun would be unbearable.

We go down along what once was the shore of the big lake and we find ourselves on the salty crust and the salt crunches under our heavy tires; we drive for a few meters and then we stop, around us there is a surreal silence, only the wind noise, a spectacle and an emotion difficult to describe.

It's important not to venture on the salty pan randomly, but it's good to follow the main track, even during the dry season; there may be some humid areas, not visible except when it's too late and you are already muddled.

We drive on the main road and shortly after we go through the Vet Fence, that isolates the wild animals from the cattle, so that the latter cannot be infected with diseases, but also avoids episodes of conflict between man and the nature; some environmentalists are studying the impact that this fence has had on the migrating herbivores in these places and opinions on its necessity or harmfulness are somewhat controversial.

From here, only during the dry season, you can take the shortcut that crosses a portion of the salted pan and head North-East, heading to Kubu Island; we drive this way as we are sure the whole track is dry.

When we miss 10 km we see the profile of some baobabs on the horizon, here it is; what an emotion!

We proceed, and as we approach, we see Kubu Island in its beauty.

We are welcomed by some immense and nodose baobabs, that seem to be 4,000 or 5,000 years old, they are spectacular and majestic; we look around and see only white salt around us.

It is almost sunset and so we go to the campsite located in the Western part of the island; we park, settle, relax, and then light the fire and cook dinner.

The campsite is very spartan, as they want to preserve the island ecosystem to the maximum; the ranger who came to check our papers told us they are planning to move the campsite a little further in the pan so as not to spoil the fragile Kubu Island ecosystem.

Kubu Island is in fact a granite outcrop, about 10 meters high and 1 km long; in prehistoric times it was surrounded by the waters of an immense lake that is thought to have existed here about 15,000 years ago.

There are several signs on the island that prove its existence, the fossil beaches, some fossil shells and fossil diatoms, and many pebbles that have been rounded by waves.

There is fossil guano on the island's rock formations, that means many birds, especially aquatic birds, nestled here, and this would not have been possible if the water had not been present.
On Kubu Island some archaeological finds dating back to the Stone Age were found, mostly sharp stone utensils.

There are also the remains of some buildings, more precisely the parts of dry stone walls, that are believed to have been built between 1,400 and 1,600 dC. and represented the most South-West point of the Mutapa Empire, or Monomotapa, that had its capital in Great Zimbabwe.

It seems that the building with the rounded wall that was once present here was the place where the circumcision was made to the young people who, through this ritual of passage, came to adulthood; this thesis is also confirmed by the fact that the young people from the Thabatshukudu village still travel here to Kubu Island on a pilgrimage.

The next morning we wake up early and, after breakfast, start exploring the island; a car track runs around the perimeter of the island and allows you to admire it from all its angles.

On the North side there are some gigantic baobabs and some rock formations, highly polished by weather, very suggestive; we take a lot of pictures and get off the car in several places to venture on the island.

What a spectacular place, we are alone, in front of us an expanse of salt at sight where, on the horizon, there seems to be water, but we know very well that in this season it cannot be possible, so it is a mirage, created by the refraction of the sun's rays on the surface of the pan, that deceives our eyes.

The silence that is in this place is something indescribable and it is broken only by the wind's noise or the crunch of the salty scum that breaks under the soles of our shoes; we would like to stop the time and stay here forever.

The remains of the walls are located in the South part of the island, leaving the car near the immense baobab that welcomed us when we arrived, we walk on foot.

We take several photographs, both at the walls and at baobabs, silent witnesses to the history of this lost and remote island.

We return to the campsite and, when the sun goes down to the horizon, it gives us one of the most beautiful sunsets we have ever seen.

But nature still has a surprise for us; when the sun sets and drops the darkness, the moon light illuminates the white surface of the pan and the reverb is so strong that it creates shadows, what a show.
We can clearly see the profile of baobabs, rock formations, and even that of a brown hyena that has passed not far away from us.

The next morning we would not like to leave, but our expedition is just at the beginning and we still have many wonders to discover; we head North, we cross the track on the landfill that divides the Sua Pan from the Ntwetwe Pan and after about 4 hours on the road, we arrive at the A3, the road linking Nata and Francistown to Gweta and Maun.

We left Kubu Island behind and as it disappeared into our rearview mirrors we said this is definitely a "goodbye" and not a "farewell". 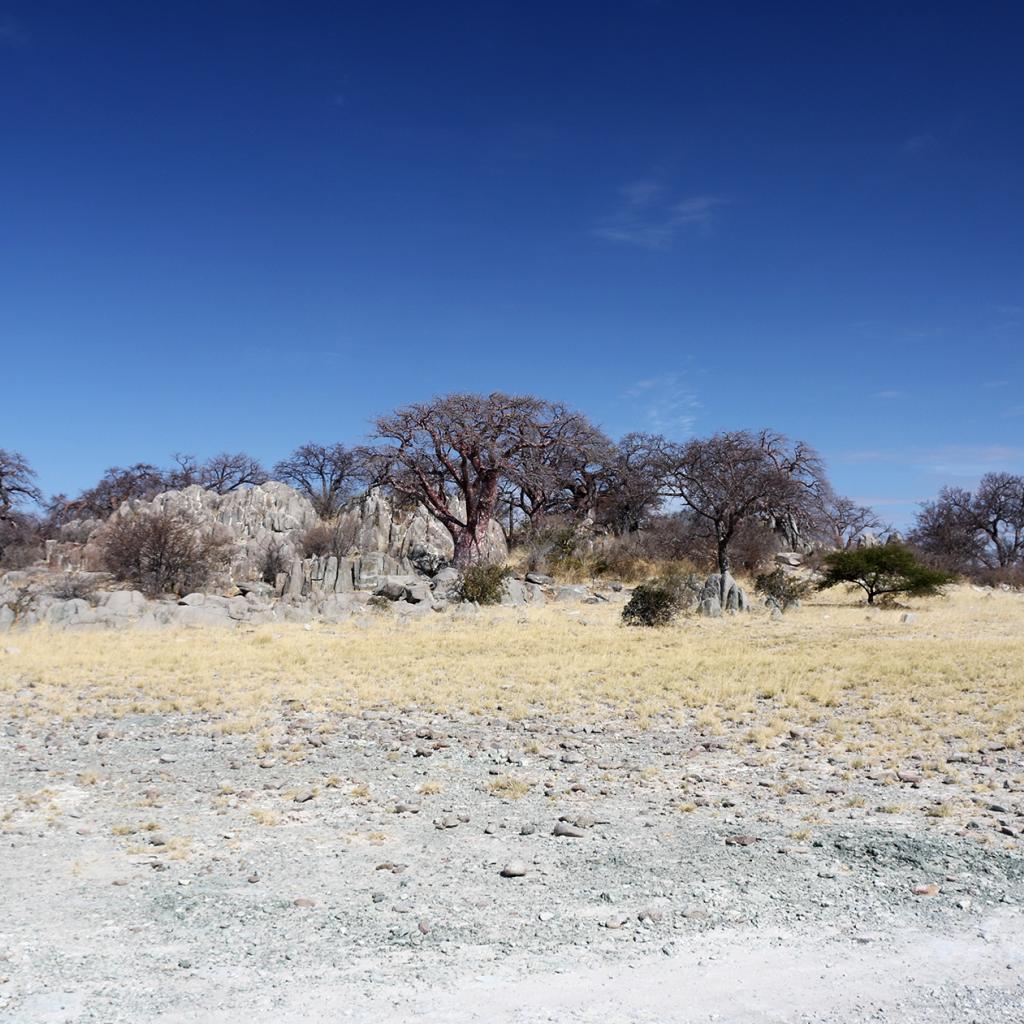