The Khama Rhino Sanctuary is located in the East of Botswana near the towns of Serowe and Palapye and not far from the border post with South Africa of Martin's Drift and Galtons Bridge.

This center was established in 1992 by local communities, with the aim of restoring the original environment, that was present in this area and that had been partly destroyed by the presence of farms, and to create an area suitable for hosting rhinos, both white and black.

A program of conservation and repopulation of these two species of animals was initiated, which, unfortunately, are threatened by the risk of extinction.

Rhinos are, in fact, victims of a ruthless poaching for their horns; stupid and backward beliefs mistakenly recognize, to the horn of these beautiful animals, a healing and aphrodisiac value, but in reality their horns are made up of creatine, just like our nails and our hair.

There are numerous centers and sanctuaries in Africa where rhinos are being protected and where repopulation programs have been started and the Khama Rhino Sanctuary is a successful example; the area is ideal for these animals and, from the 4 white rhinos that were introduced here in 1993, today there are more than 30 specimens.

Given the success of the operation with white rhinos, black rhinos were later reintroduced, and also in this case the positive results took not much to come.

From this reserve some specimens are picked up and reintroduced into national parks and reserves, the hope is to be able to actively contribute to preserve these wonderful animals and save them from extinction.

We reach the park in the late afternoon, the sun is setting when we arrive at the gate; we go to the office where we pay the entrance fee and they assign us a pitch at the campsite.

We take the opportunity to exchange some words with the present rangers, they tell us about the importance of their work and how in the park there are no poaching, in short, a happy island of conservationism.

We drive on the somewhat sandy slopes of the reserve and, following the directions we have been provided at the entrance, we reach the space we have been assigned to.

The camping is very nice with well-organized spaces and plenty of privacy, bathrooms and showers are shared with other guests and are located inside a straw-roofed building.

To reach this construction we have to go through a short sand path, that we nicknamed "the spiders’ nests trail"; the reason is very simple and easy to guess: in the dark, the light of our torch illuminated the eyes of these innocuous spiders and it seemed that the path was stuck with precious stones shimmering by the light.

We are a bit tired for the trip, this morning we left from Johannesburg and we have traveled almost 700 km, so instead of cooking, we prefer to go to the restaurant inside the reserve, and, in the aftermath, we can claim to have made a great choice; the steaks served here are fantastic, very good and accompanied by a triumph of vegetables.

After spending the night in the park campground, we wake up at dawn, have a quick coffee and start the discovery of the reserve.

The park is very beautiful from the scenic point of view, the roads are well maintained and you can observe numerous animal species.

We walk the road starting from the restaurant and enter a stretch of shrubbery, where it is more difficult to spot the animals, but it is the favorite habitat of black rhinos.

After a few hundred meters the landscape changes completely, the vegetation opens and leaves room to a series of pan, saline depressions, that turn into lakes during the rainy season, and then remain completely dry during the dry season.

We go ahead towards the Malema's Pan, the dry lake creates a large open area, on the banks of the pan grows the grass that is eaten by different animals and in fact we observe numerous impalas, kudus, springboks, ostriches and two curious giraffes they are passing near the pan; they stop to look at us, then go on their way, looking for food.

However, there are no rhinos, both the ranger and a guy at the restaurant last night, told us that this is one of the places where it's easier to see them, but with these animals you can never have the certainty of finding them in a certain place; so we decide to continue and head first to the Small Pan and then to the Serwe Pan, along the Pan's Edge Drive.

On the trail we meet some zebras and several wildebeests and a Kori bustard, the heaviest bird in the world that can fly; while the rhinos appear to be unwilling to be seen, we see their traces, their prints shown in the sand and their stools recently deposited, so we know they are in the vicinity.

Finally, after a shrubbery that closed the sight, we come to a clearing and see a magnificent white rhino that eats quietly, it is a creature that expresses strength and power, the mass body and its horn demand respect; it was quiet there to eat, without worrying about our presence.

Here fortunately these animals can live quietly, the nearby base of the Botswana Defense Force guarantees excellent protection from poachers, as well as the electrified fence, equipped with sight turrets, running around the reserve.

Our research continues, we try to look for the black rhino; it is less meek than the white one and therefore it is necessary to approach it with greater attention.

We head to the park area called Camelthorn Island but we have little luck, only an oryx, hidden in the bushes, creates strange shadows that for a second deceive us.

We are almost resigned to the idea of ​​not seeing it and we decide to go to the picnic area to have breakfast before leaving the park.

But, as it always happens when you put your camera down, here comes a beast from the bushes, a beautiful black rhinos, right on the road we had just walked off this morning; when we passed here a few hours before it was not there while now it seemed to wait for us to be seen and photographed.

Satisfied for this sighting we do not abandon the idea of having breakfast, the picnic area is beautiful, well groomed and clean, with a gigantic baobab standing in the center of the area, all around there are tables and stools of concrete; obviously they could not miss the places for the inevitable braai, the barbecue.

The Khama Rhino Sanctuary has given us a great safari and we are sorry that we do not have time and cannot participate in an excursion with the local rangers, so to approach rhinos in a walking safari.

We will definitely come back to this place when we pass by, as well as being a very beautiful place from the natural point of view, it is also a useful stopover to continue the trip to Kubu Island and the Makgadikgadi Pan or to the Central Kalahari Game Reserve or the Chobe National Park. 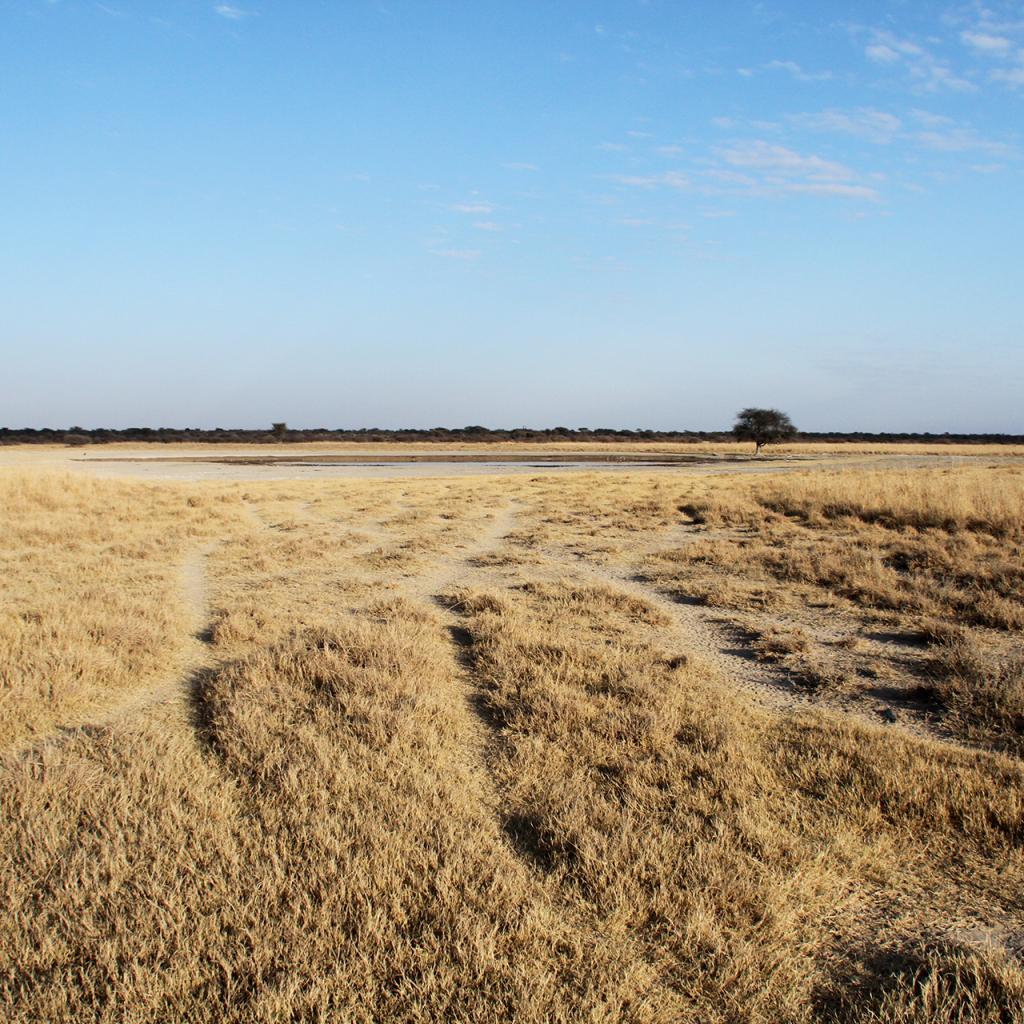