The Kgalagadi Transfrontier Park is located between South Africa and Botswana, on the South-Eastern border of Namibia and is part of the Kalahari Basin, a desert area with a surface of ​​1,630,000 sq. Km, between the Equator and the course of the Orange River in South Africa.

It was born from the will of the Parks and Natural Reserve Department of South Africa and Botswana in 1999, to protect one of the most pristine ecosystems of the African continent and the world.

The Kgalagadi was the first transfrontier park on the African continent, an example that was followed by other parks and nations; it covers an overall surface of about 38,000 sq. km, most of which, 28,400, are located in the territory of Botswana.

From the territory point of view, the park encloses two of the three typical terrains of the Kalahari basin: the duneveld, in the South-Western part, is sand dunes that no longer move to wind blowing, but are now fixed, on them a semi-desert vegetation has grown; the plain thornveld in the North-Eastern part, a shrubbery plain; moreover, in some parts of the park there are some salty pans.

There are two rivers in the park, the Auob and the Nossob river, the latter marking the natural border between Botswana and South Africa.

Both rivers are ephemeral, most of the year their bed is dry while they collect water during the rainy season; however, rarely they turn into real rivers with running water, the Auob river runs about every 11 years, while the Nossob river every 50 years.

Even during the rainy season rainfall is scarce, often it is very scenic storms with strong winds, that can give rise to storms of sand; in the South-Western part of the park the precipitation is scarce than in the part that extends over the territory of Botswana.

There are several artificial ponds in the park, many of which were built by the breeders who once had cattle in these lands; the waterholes are found almost exclusively along the Auob and Nossob rivers and provide water to the animals that live here.

The waterholes are usually near wells that draw water from the ground and are powered by wind power or solar panels.

These are the best places to spot the animals, especially during the dry season, as they are the only available water sources and therefore the animals go there with some regularity or stay in their vicinity.

We spend 2 nights in the Kgalagadi Transfrontier Park, for us it was the first time we visited it; we chose to spend them at the campsite at Twee Rivieren.

We come from Namibia and therefore we enter from Mata-Mata, where we also sort out the formalities to exit the country, but we do not enter South Africa and the reason is simple, the park is transfrontier between South Africa and Botswana and therefore, according to the exit gate, immigration takes place in the related country.

If we had come in and out of the same country (South Africa or Botswana), it would not have been necessary to re-immigrate; this is to keep in mind for a next visit.

In the Kgaladadi, despite being a dry and semi-arid area, there are over 100 types of plants, shrubs and herbs, some of them endemic in the area.

There are also 164 species of birds, some of which reside here all year, others migrate here in a given season; among those living here there are the Kori bustard, the secretary bird, the fork tailed drongo, the yellow-billed hornbill, the bateleur, the sociable weavers, the Southern pale chanting goshawk, the lanner falcon, various vultures, the martial eagle, the tawny eagle, the Verreaux eagle owl or Giant eagle owl, the ubiquitous crimson-breasted shrikes and the ostriches.

There are also reptiles, including several species of snakes, turtles and freshwater turtles, lizards and geckos.

We spend our first safari day in the Kgalagadi Transfrontier Park exploring the area between Mata-Mata and Twee Rivieren, following the Auob river, that is dry this time of year.

We are very lucky because, about twenty miles from the gate, we see a family of lions with a prey; the most adult specimens sleep after eating, while the puppies are awake and look around curiously, while a subadult specimen fights with what remains of the prey.

As we go down to Twee Rivieren we see several animals including several gemsboks, the animal symbol of the park, and it could not be otherwise given that there are so many of them, we also see gorgeous giraffes that drink in a waterhole; and as well many birds and shoot several photographs.

The bed of the Auob river lies between two dunes covered with vegetation, the views are very beautiful and there are a couple of observation points positioned on top of the dunes; we go up and enjoy the view.

We arrive at Twee Rivieren in the late afternoon, the camping and all the services are out of a gate that does not allow wild animals to cross the fence and come on this side; this, however, does not prevent squirrels, meerkats and mongooses in doing raids in search for food, they are too funny.

We spend the next day exploring the part of the park along the Nossob river, this is a wider valley, here too there are many waterholes but, initially we see fewer animals, only a lanner falcon hunting some small birds is worth noticing.

Subsequently, we spotted hundreds of gemsboks, some wildebeests and several birds of prey, including a marvelous young specimen of martial eagle; we also see some jackals wandering around a waterhole, they are always looking for a good opportunity to eat and the waterholes are their favorite place for this purpose.

In a clearing of drought-yellowed grass, we see two serpentine birds hunting, their alert eyes of birds of prey watching the ground and their mighty feet throng to the ground when they notice something appetizing; they look like two nasty killers.

The track is in perfect condition and we drive North, the maximum allowed speed is 50 km / h, it is good to be cautious, it is not unusual to find animals on the road.

The sun is warm and the landscapes are spectacular, we enjoy the day trying to spot the animals; at some point, near the picnic area next to the Dikbaardskolk waterhole, we see a slender silhouette that walks in the dry river bed: it's a cheetah!

But we immediately realize that he is not alone, with him there are four more specimens, they are definitely a family, from that distance we cannot figure out whether they are five brothers or four brothers and a mom.

One at a time they get up and walk along the river, then go under the shadow of a larger bush; it was a spectacular sight and we admired them in silence, the only noise was that of the wind blowing down from the dune.

Since we are there, we decide to stop for lunch and then return to Twee Rivieren, we have traveled many miles and we must be sure to return to the camp before sunset, and we also booked a night safari with the ranger for tonight, this is the only way to try to spot some nightlife.

Along the way we observe the inevitable springbok and other birds of prey, we also stop to admire some sociable weavers’ gigantic nests. They are real architectural works that, in some cases, cover a large part of the tree that houses them.

When we miss a few miles to the gate of Twee Rivieren, a few meters from the road, we see two beautiful cheetahs, they look like two brothers and they are gorgeous.

At some point they cross the road and continue in the opposite direction to ours, we turn and follow them, keeping us, however, at a proper distance for non-disturbing; shortly afterward they cross again and then continue their journey parallel to the road.

We follow them a bit longer and then we decide to let them go and resume our journey and return to the campsite.

We park our car, take our batteries and get to know the ranger with whom we go out on safari in a short while.

We leave before sunset and a few meters from the gate he shows us a wonderful Verreaux’s eagle owl in his nest; owls are spectacular and camouflage perfectly with trunks and tree branches, it is not easy to see them.

He tells us many interesting things about the park and its animals, he is very prepared and he is also nice.

The sun sets quickly behind the dunes and we start using the spotlight to see the animals; we observe several bat-eared foxes that roam furtive, some Cape foxes and an African wild cat; we also hoped to see a honey badger or an aardvark, but we were not lucky enough.

It is crazy how all the animals, even the big ones like the gemsboks and the elands, disappear at the fall of the darkness, it is impossible to see them, who knows where they have taken refuge to spend the night, avoiding the possible attacks of the felines.

When we turn to return to the camp, we see the two cheetahs we saw in the afternoon, they stayed in the area and are still walking not far from the road; we illuminate them with the spotlight and see them entering the bushes.

A little cold, we return to the campsite at Twee Rivieren; it was a long day that started before dawn and ended well beyond the sunset, but we are happy.

These two days spent in the Kgalagadi Transfrontier Park were just a taste; we will come back and explore more in-depth, venturing ourselves to the North and in the Botswana part. 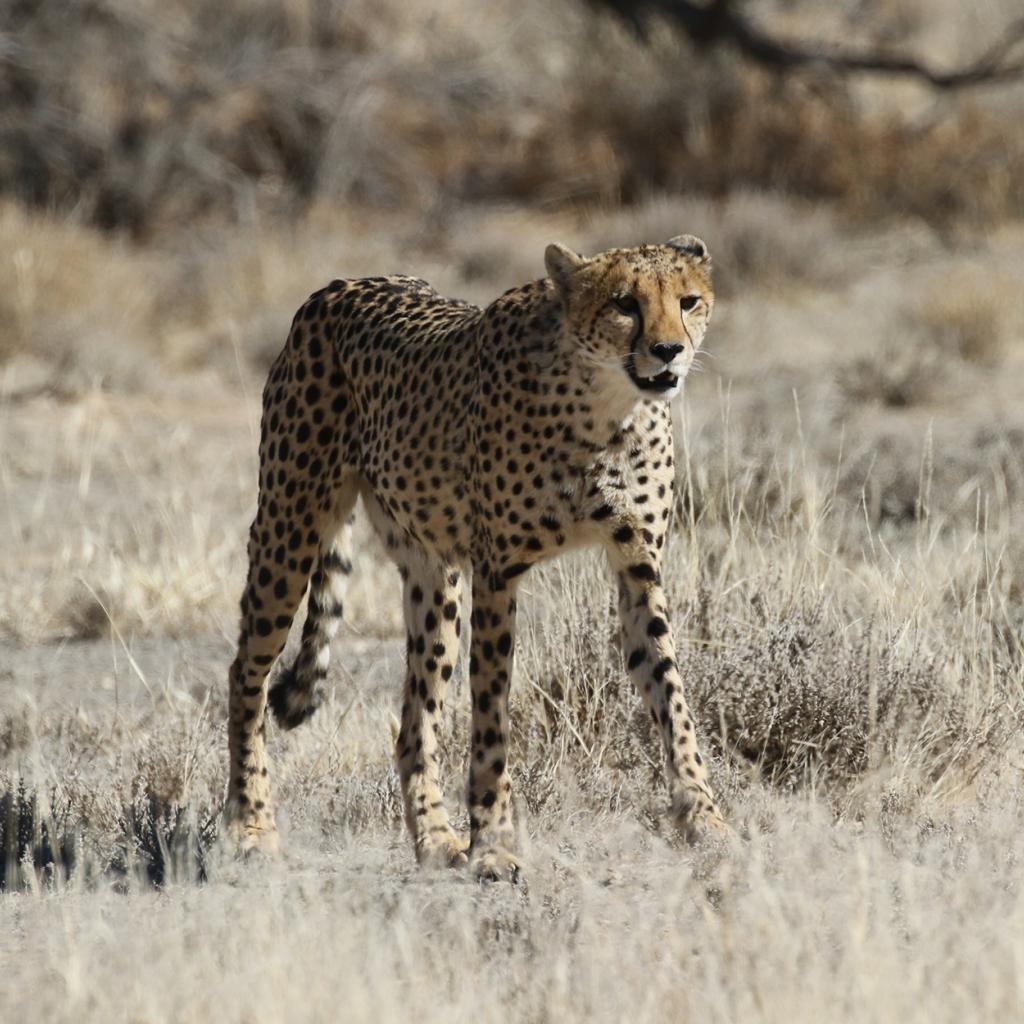