The Karoo National Park is located in South Africa, in the North-Eastern part of the Western Cape province; this is a semi-arid area and the park was born precisely to protect this land, the vegetation and the animals that live here.

It was founded in 1979 and its territory was later enlarged in 1989 and today it covers an area of ​​750 sq. Km; it contains open spaces and rocky formations and escarpments of dolerite.

Since there are different altitudes, the park encloses a complex environment.

The Karoo National Park is located in the Great Karoo region, a semi-desert area with the largest variety of desert flora in the world and the largest number of succulent plants in the world.

Many of these plants can be admired on the Bossie Trail present in the park, located within the Rest Camp area and that can be walked without having to be accompanied by a ranger.

Also within the Rest Camp area there is the Fossil Trail, a 400-meter path where you can admire some of the 26,000 fossils that were found in this area dating back 250 million years ago; among them, two of the most interesting are a skeleton of Bradysaurus and one of Diictodon.

It is also interesting to visit the Interpretative Center, that was set up in a farm house, that was here before setting up the park; in this place you can find many interesting information about the flora and fauna of the Karoo region.

The Karoo National Park is also very interesting from the geological point of view; the middle plateau and the upper plateau of the reliefs in the park are made of dolerite.

In this area there have never been any telluric movements and therefore the rock layers are perfectly parallel to the ground and it is possible to clearly distinguish the different types of rock.

Particularly the layers can be seen very well from the Klipspringer pass, where you can admire the rock formations that have arisen following the vertical erosion of the dolerite; there are often some rock-like pillars standing on their feet, while at their feet you can clearly see the rock pieces that have detached themselves and fallen down into the valley.

The Karoo National Park contains two of the three biomes of the Great Karoo area: the Grassland and the Nama-Karoo, the latter being present in most of the park, about 30% of the plants belonging to this biome are present in the park.

There are several species of birds, many of which are endemic; In the park there are several pairs of Verreaux eagle or black eagle, this is one of the places with the highest concentration of this beautiful eagle; there are also the Southern pale chanting goshawk, the Karoo bustard and other bustards, the martial eagle, the cormorants, the hawks, the flycatchers, the herons, the ibis, the kingfishers, the lapwings, the owls, the rollers, the starlings, the woodpeckers, the ostriches and so many others.

There are also many mammals, including those typical of arid areas such as the gemsboks, the brown hyenas, the aardwolves, the black-backed jackals, the steenboks, the aardvarks, the suricates or merkaats, the bat-eared foxes, the caracals, the lions, the springboks, the red hartebeests, the greater kudus, the elands, the Cape mountain zebras, the porcupines, the Cape baboons, the mangooses and the black rhinos.

There are many reptiles in this inhospitable territory: several species of snakes, turtles, lizards, agames, skinks and geckos.

There are not many options to stay in the Karoo National Park: the Rest Camp that offers Cape Dutch cottages and a camping site, that also houses a restaurant and a shop selling souvenirs and groceries; there are also a couple of cottages in a remote area of ​​the park along the Nuweveld Trail.

Inside the park it is possible to carry on individual safaris or with a ranger, the latter usually being in the morning or in the evening; the most visited places are the Klipspringer Pass, the Potlekkertjie Loop and the Lammertijes Leegte.

The climate of the park is extreme throughout the year: the summers are very hot, from December to April, temperatures are over 40 ° and summer rains usually show up in the form of thunderstorms; the winters, from June to September, are usually very cold, the temperature drops below zero, and the Nuweveld Mountains often have snow.

We arrived at the Karoo National Park at lunchtime, departing in the morning from Cape Town, walked in from the gate, and first went to the check in to ask some ranger for info about the roads.

They gave us a map where they showed us the paths that are closed and those for whom a special permit is needed to travel.

At first we ventured to the Klipspringer Pass, the road climbs steeply and, at some points, opens up to beautiful panoramic views.

The road winds through the rock formations and, once past the passage, the road descends more smoothly towards the plain; during the journey we stopped several times to take photographs both to the panorama and to the animals we spot.

The scenery is spectacular and we are alone, what a surprise; we stopped at the Doornhoek picnic area to have a quick snack; the area has a fence that protects those who stop here from the animals.

From here we continued our journey down the plain where the Potlekkertjie Loop is located; even here we have seen several animals and we have had a privileged view of the rock formations of dolerite, they are very fascinating.

When we returned to the Rest Camp we went to our chalet and enjoyed a wonderful sunset behind the mountains.

The next morning, before we left, we went through the Lammertjies Leegte, located in the Easternmost part of the park, and here we did some sighting and took photographs with the wonderful morning light.

During this trip, the Karoo National Park was just a stop while getting closer to Johannesburg, but we will return because we loved it and would like to explore the Western part more. 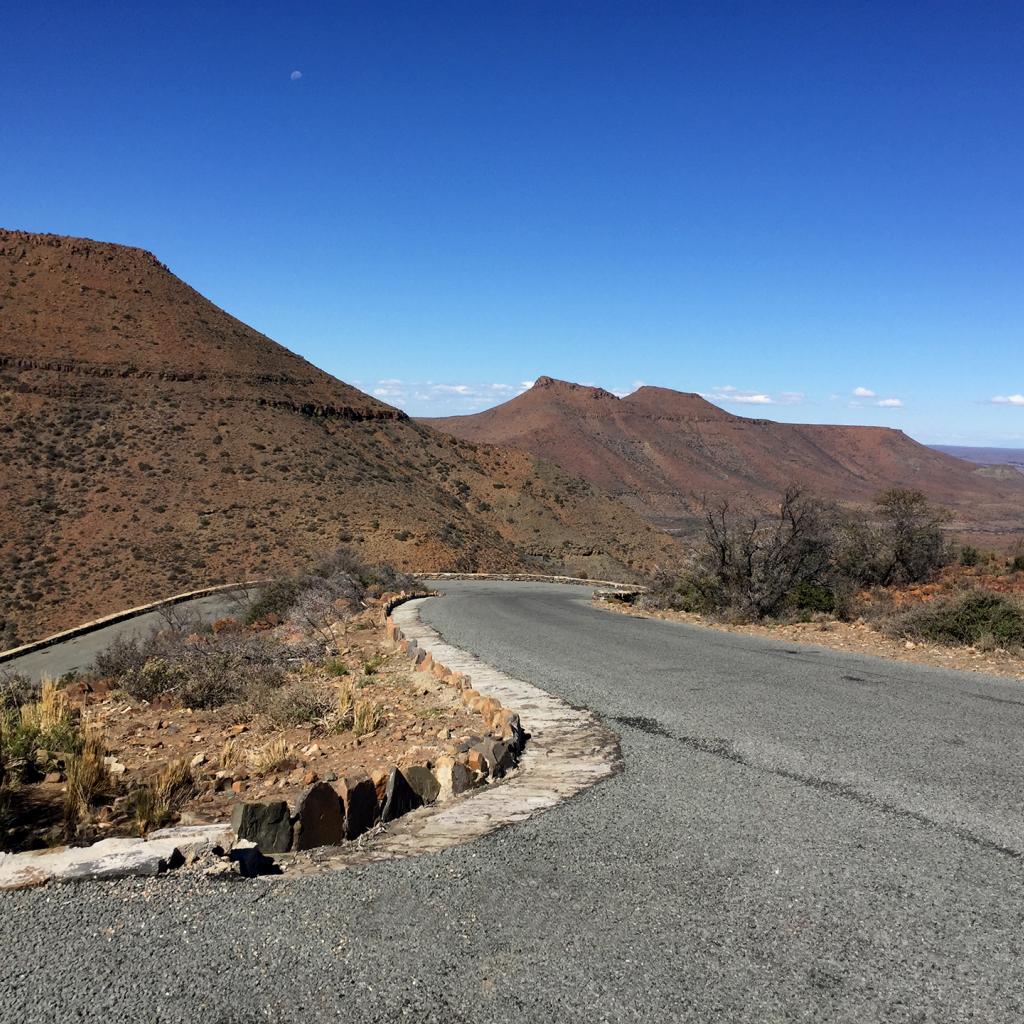