Cape Town is located in the Western Cape province and is often included in the list of the most beautiful cities in the world, and in fact the natural scenery where the city is set is spectacular, overlooking the Atlantic Ocean and with the Table Mountain on the back, that dominates the metropolis, give wonderful glimpses.

Its natural beauties are attracting hundreds of thousands of tourists each year.

The Cape Town tour usually begins with the climb to Table Mountain, the mountain that, with its 1,000-meter high rock walls, towers over the city center, its name derives from the mountain form flat on top as a table.

Often the Table Mountain is covered by a layer of white clouds coming down gently from the summit on the slopes, these clouds, often generated by the different temperature between the air and the water of the ocean, are called "Table Cloth".

To reach the summit of the mountain there are two options, the first, and most convenient, to use the cable car, the Table Mountain Aerial Cableway; while there are many trekking trails that can be walked to reach the top of the hill on foot.

From the top of Table Mountain there is a spectacular view of the city and the Atlantic Ocean, a truly breathtaking view; here you can also walk along some trails, that will discover the great biodiversity of this area, there are in fact over 1,400 species of flora; there are also several specimens of the sympathetic rock hyrax.

In addition to the Table Mountain or Tafelberg, the city center, called the City Bowl, is surrounded by other peaks including the Lion's Head, the Devil's Peak, the Twelve Apostles, and the Signal Hill .

In the city the most frequented place for tourists and locals is the Waterfront, the old port of the city has been transformed into a pedestrian area with shopping malls, restaurants and clubs; from the wharfs of the Waterfront you can enjoy a spectacular view of the Table Mountain.

Boating trips to Robben Island, the island famous for being used during the period of apartheid as a prison for political prisoners including Nelson Mandela, leave the Waterfront.

The Table Bay, overlooking the city, is a beautiful bay with wonderful beaches where you can enjoy moments of relaxation.

Another destination not to be missed is the bohemian district of Bo-Kaap, famous for its low-painted houses in glittering colors, and nowadays it has become a trendy neighborhood with restaurants, bars and boutiques.

Like other major South African cities, Cape Town sees the presence of luxurious neighborhoods such as Constantine opposed to huge townships, slums with metal shelves, where the majority of the black population lives.

But Cape Town has more to offer, the surroundings are enchanting places and are all to explore, for fans of bucolic landscapes and good wine, just 40 miles from the center of Cape Town is in fact the vineyard region, an agricultural region with a hilly landscape.

The towns of Stellenboch, Franshhoek, Paarl and Somerset West are picturesque and surrounded by spectacular wineries.

Moving through the Wine Route allows you to discover unbelievable corners of South Africa, Stellenboch, the most famous and popular wine-growing area, is a town characterized by its Cape Dutch houses full of shops, art galleries and of course wine bars where you can taste great local wines.

The estates are open to the public, some require early booking, and you can visit the cellars, the vineyards and taste the wines; some wineries also have very interesting gourmet restaurants.

In particular Franshhoek is named the Gourmet Capital of South Africa.

Another attraction of Cape Town is its beaches, the coast around the city is jagged and alternating rocky stretches to stunning white sandy beaches.

The beaches extending South of the city, along the Cape Peninsula, are divided between the West and the East facing, overlooking the False Bay.

Both coasts are gorgeous, but the West facing beaches are more exposed to waves and wind, some are less affected like the Hout Bay beach that is sheltered in a bay.

Even the water temperature is colder on the Western coast, bathing is allowed everywhere but it is better to locally get informed about currents and other dangers.

Leaving Cape Town and heading South on the West side of the Cape Peninsula, there are several places worth a stop, the first is Hout Bay a relaxing place with a beautiful beach and the pier where boats leave for Duiker Island, a rocky islet that houses a Cape fur seals colony.

Going South towards the Cape of Good Hope you will meet Noordhoek, a whitewashed beach, six kilometers long, that is the preferred destination for horseback riding, while the almost constant wind makes this stretch of coast the ideal spot for surfers.

During the months of Southern winter it is possible to see the whales that come to these shores from the cold Southern waters.

The South end of the peninsula is a natural reserve, the Cape of Good Hope Nature Reserve, that has a low vegetation, the fynbos, that in September and October blooms giving a unique landscape.

Within the natural reserve you can see several animal species, there are ostriches, Cape mountain zebras, bonteboks, elands, springboks and numerous chacma baboons or Cape baboons.

The Cape of Good Hope is a place that evokes great explorations of the past and great navigators such as Bartolomeus Diaz and Vasco Da Gama who faced the stormy waters of the oceans to open new maritime routes.

The Cape is on a rocky beach where a large wooden signboard carries out the coordinates of the place and where it is impossible not to take a souvenir photo.

Cape Point is the most spectacular part of the reserve, the path leading to the lighthouse is very scenic, the cliffs on the ocean, the high waves crashing on the coast, creating clouds of water, and the strong winds make it all magical.

You can reach the Cape Point lighthouse also with a funicular, the Flying Dutchman Funicular, that reaches the top of the promontory in a few minutes.

The cable car takes its name from the famous legend of the Flying Dutch, a ghost vessel forced to slip the seas forever.

The legend came from the shipwreck of the Dutch commander Van der Decken's naval ship heading to Indonesia, it seems that the captain, in order to save the ship hit by a severe storm, made a pact with the devil but the ship sank and his spirit turned in a ghost at the helm of a ghost ship wrapped in a ghostly fog.

Going to Cape Town from the Cape of Good Hope reserve and along the East coast you can admire several wonderful beaches, among which the most famous is Boulders.

Boulders Beach is a large colony of African penguins, the first penguins arrived on this beautiful beach in the 80s, and never left, nobody knows why they chose this beach, but today the colony counts thousands of specimens.

You can walk through the raised wooden walkways over the beach, from here you can admire these cute penguins close by.

Muizenberg beach is instead suitable for those who want to learn to surf or practice kitesurfing, here the waves are not high and along the beach there are shops that rent boards, diving suits and offer surf lessons.

Only warning, if you hear the siren sound better to get out of the water quickly, this sound is in fact the signal indicating that a shark was spotted.

A little further away from Cape Town there are two other places not to be missed, the first is the town of Hermanus, the best place in the world to watch the Southern right whales directly from the coast, and Cape Agulhas that is the further South end of the African continent, where the Atlantic Ocean and the Indian Ocean meet. 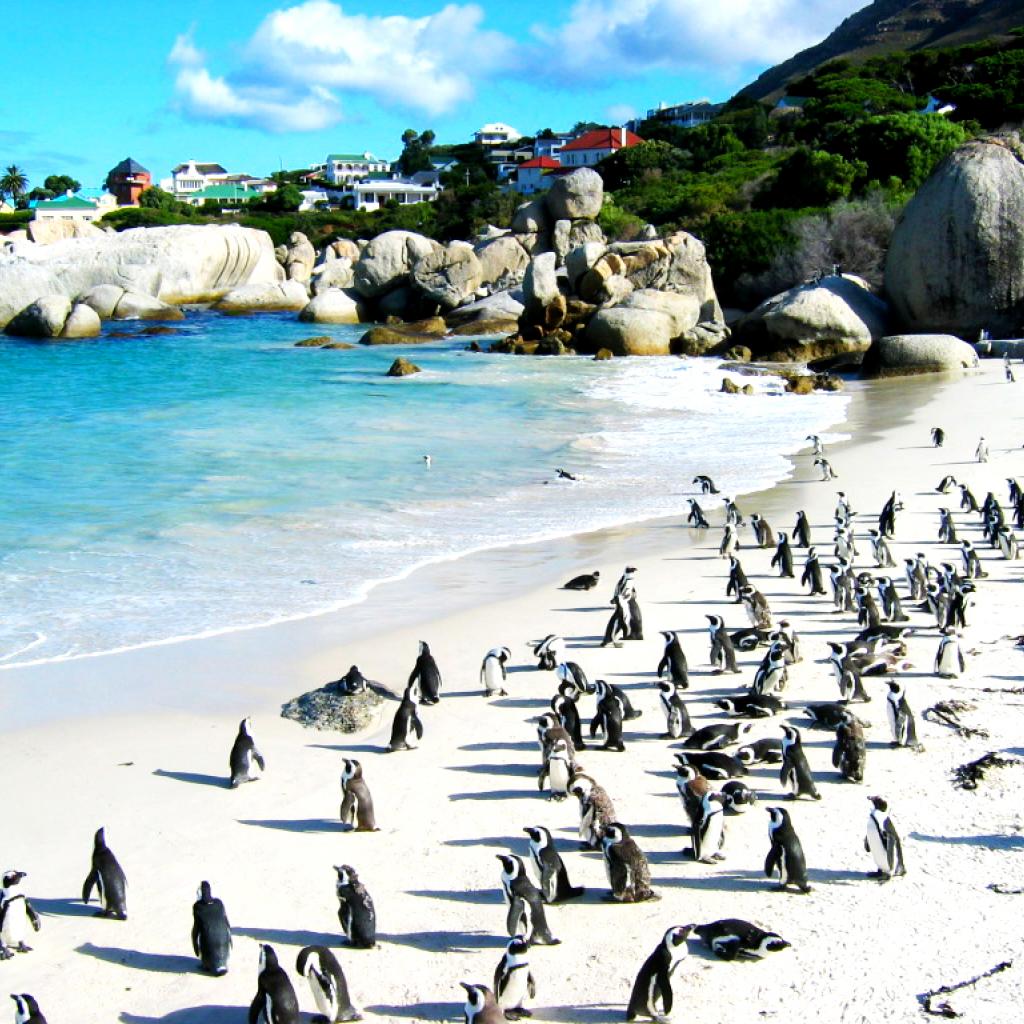