Our trip to the Ivory Coast allowed us to meet an incredible population who, in centuries, succeeded in resisting the influences of the monotheistic religions, such as Christianity and Islam, to overcome the period of slavery and European colonization almost unscathed, managing to keep their traditions intact: we are talking about the Senufo.

The Senufo or Senoufo are divided into numerous subgroups, living in the Northern region of the Ivory Coast, in South-Eastern Mali and in Burkina Faso.

The Senufo are predominantly a population of farmers who cultivate corn, millet, sweet potatoes and peanuts, but they are famous above all for their artistic skills and for being expert musicians.

They are superb carvers of wood sculptures, masks and symbolic figures, they have specialized their art and craftsmanship over the centuries and each subgroup has specialized in a certain production, art is learned within these subgroups and handed down from one generation to another.

The art of the Senufo inspired several European artists of the twentieth century, such as Pablo Picasso, who went to the villages of the Senoufo painters three times and where he was impressed by their traditional painting techniques and the figures that were represented.

During our stay in this part of the Ivory Coast, near Korhogo, we had the opportunity to visit some Senoufo villages, these consist of small mud brick houses with a thatched roof; we also witnessed the iron casting processand the creation of simple but beautiful paintings on canvas.

Most of the Senoufo practice the animist religion, they believe in a supreme being who created the world, Kolotyolo and in the figure of the Ancient Mother, called Maleeo or Katieleo, but, these two main figures, are flanked by numerous ancestral and natural spirits.

The Senoufo are known for their deep attachment and dedication to ancestral practices and religious beliefs.

To get in touch with the Creator God the Senufo use fetishes as intermediaries, these are considered the channels of communication with the divinity and also serve to protect themselves from the power of evil spirits.

Fetishes are also present on barns to protect the harvest, while feticheur hutsprovide for the presence of numerous depictions of sacred animals and spiritual figures, placed to protect the sacred place where ritual sacrifices take place.

The social organization of the Senoufo is closely linked to animist religious beliefs, there are basically three society: the Poro, the Wambele or Tyekpa and the Sandogo society.

The Sandogo society is oriented towards the arts of divination and occupies a good place in the spiritual organization of the Senufo; this society is essentially feminine, although men can enter and practice divination; they have their rituals and a secret order.

Different is the role of the Wambele society (The Society of Sorcerers), or Tyekpa, that performs witchcraft and rituals.

The most important is the male secret society called Poro, whose function is to ensure a good relationship between the living world and the spirits, the Poro has strict rules and many taboos, provides elaborate initiation rites in a forest area that is considered sacred.

The initiation rituals involve masks, figures and ritual objects that the Senufo engrave in wood and model in brass, and that they perfected over the centuries, the secrecy of this society helped the Senufo to preserve their culture.

The Poro initiation rituals last 21 years and are divided into three phases of 7 years each, at each stage the children are taught how to live in society, spiritual rituals and other religious secrets that are handed down by the elderly, as well as having to pass skill tests and practice acrobatic dances.

At the end of the initiation period the boys become men and this new social status is celebrated with a dance called Boloy, or panther dance, an acrobatic dance performed by the initiates returning from a period of isolation in the sacred forest.

Initiates wear a costume with earthy and spotted tones, reminiscent of the mantle of a leopard, an animal considered sacred, and even the movements are inspired by the lithe feline.

The dance is very acrobatic and reflects the hard training suffered in the sacred forest, to witness it, it is fascinating and the rhythm of the percussion is engaging.

The girls also participate in the first phase of the Poro, and the N'Goron dance is an initiation dance performed at the end of their stay in the sacred wood where they are initiated and pass into adulthood.

The N'Goron dance or Dance of the Virgins celebrates the beauty of the young women who have just been initiated, they wear a short skirt with a sort of raffia pompon on their back, that highlights the movements of the dance.

The dance is characterized by rhythmic movements that serve to highlight the naked torso of the dancers, the virgins dance in circles while the boys court them with a dance that involves a very rapid movement of the legs, keeping the torso almost completely still.

We witnessed both these dances, at sunset when the light of the sun gives warm and intense colors, they were two wonderful experiences above all because the whole village joined forces to witness these events creating an atmosphere of joy. 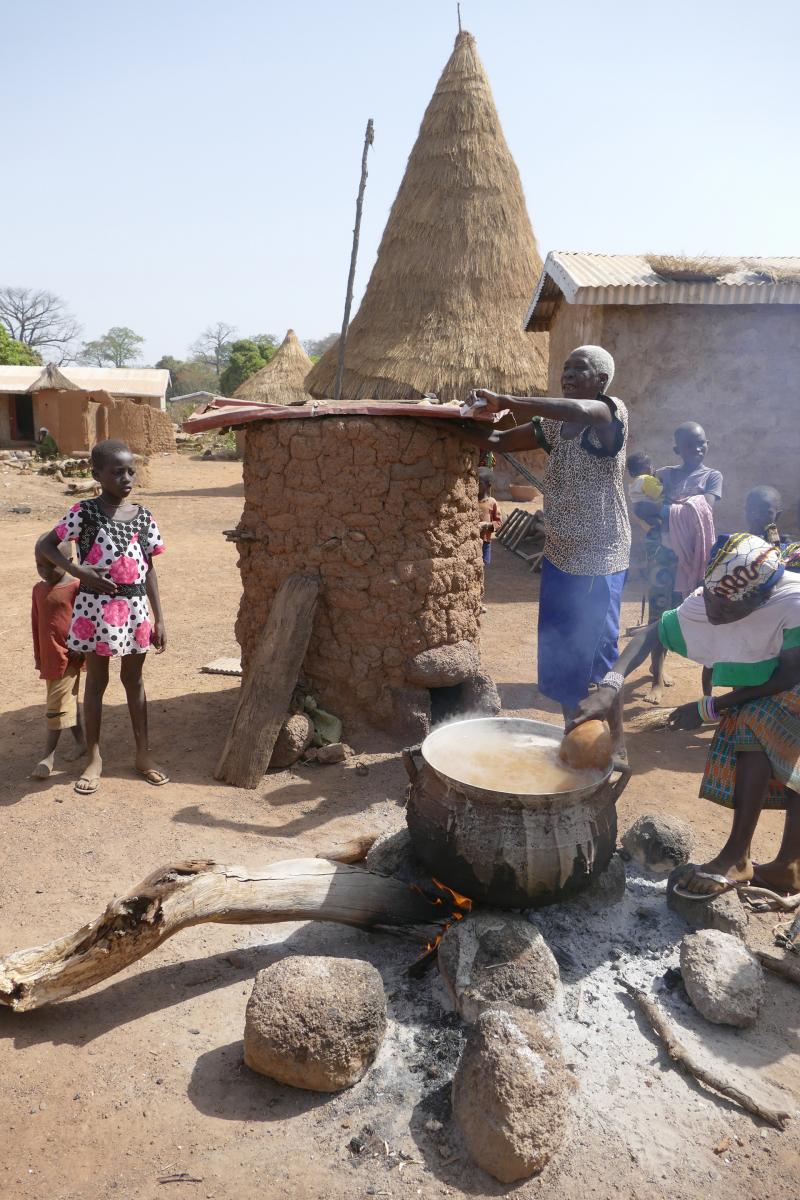