Our trip to the Ivory Coast led us to learn about a brotherhood that has handed down its traditions for centuries, the Dozo are not an ethnic group but a sort of society and militia that unites knowledge about plants and the hunt for mystical powers.

Traditional Dozo hunters are found in Northern Ivory Coast, in the South-East of Mali and in Burkina Faso, most of the Dozo of the Ivory Coast belong to the Malinkè or the Senufoethnic group.

To become a Dozo, it is necessary to overcome an initiation that consists in learning numerous knowledge that embraces almost all aspects of life beyond adopting a moral and social code of conduct.

Anyone can enter this society, to enter it is necessary to make the request to the Dozo "master" presenting an offer of 10 or 12 cola nuts and a rooster, these gifts will be sacrificed and offered to the guardian spirit, through some fetishes, that will protect the new element of brotherhood.

A ritual bath consecrates the pupil, who from that moment will follow the teacher's instructions with devotion and unconditional obedience: he will learn the art of hunting, traditional medicine and to control mystical and occult powers.

Being a Dozo means strictly respecting the values ​​of the brotherhood

The values ​​of the Dozo brotherhood:

2. Moral values ​​of each Dozo: in the Dozo brotherhood, the image that the hunter gives of himself is fundamental for the success of his actions.

The Dozo must be an example of moral integrity for those around him, he dislikes vices such as lies, theft, jealousy, dishonesty, and he is above all an example of virtue, he respects the elderly and ancestors, the hierarchy and the other individuals.

The Dozo must have a very high sense of honor, dignity, loyalty and humility.

3. Knowledge: the Dozo are taught the art of hunting and the rituals connected with it.

He learns to hunt but above all what to hunt and how to share the prey with others.

The Dozo consider wild animals owned by the spirits that inhabit the forest, and, for hunting to succeed, they must appease these supernatural beings that populate the bush.

The Dozo must strictly respect certain rules when they kill certain animals: how to gut them, how to cut their tails, etc.; if they did not follow these rules the spirits could get angry with them making them go crazy or sick.

According to tradition in fact, wild animals killed by hunters released a nyama, a destructive spirit, that rages on the community that benefits from the killing.

Every Dozo must learn spells and know the plants needed to counter this occult force; pronouncing spells and prayers and applying herbs and concoctions on the carcass of the slaughtered animal the Dozo ensures that the meat distributed to the community is healthy.

An important aspect of the Dozo training is therefore the study of the properties of certain plant essences; the Dozo, in fact, is also a healer, he is initiated into natural medicine and knows the pharmacological virtues of plants, this makes him a spiritual guardian of the malevolent forces of the forest or the bush.

The Dozo are recognizable by their equipment, they wear shirts and tunics full of amulets, hats with three points, tight trousers and above all they have with them their inseparable rifle.

Cotton fabrics are dyed with natural colors to be invisible in the forest; there is a taboo that prevents anyone from washing the clothes of a Dozo, only the owner of the clothes can wash them.

It is believed that the amulets worn by the Dozo have magical properties, they are protections against potential enemies and evil spirits and they are also able to amplify their sight and their hearing; legend has it that these fetishes make the Dozo invulnerable to bullets.

Being a Dozo means taking on the responsibility to protect your community, this has led the Dozos to become a real parallel police, a militia that maintains order and defends civilians.

During the recent civil war in the Ivory Coast, the Dozo joined the police, who were unable to guarantee public order alone; now that the civil war is only a distant and ugly memory, the Dozo are dedicated more to the defense of nature and to spiritual ceremonies.

We had the honor of going up a hill where there are two huge boulders that represent the home of the protector spirit of the region, here the Dozo offer sacrifices to the spirit, they dance and sing.

The Dozo musicians and singers sing songs that exalt the actions of hunters, use drums and a stringed instrument whose sound box is obtained by using a large pumpkin.

The dance recalls the movements of the forest animals and, during these dances, the Dozo demonstrate their resistance to pain by casually handling burning coals and sharp blades. 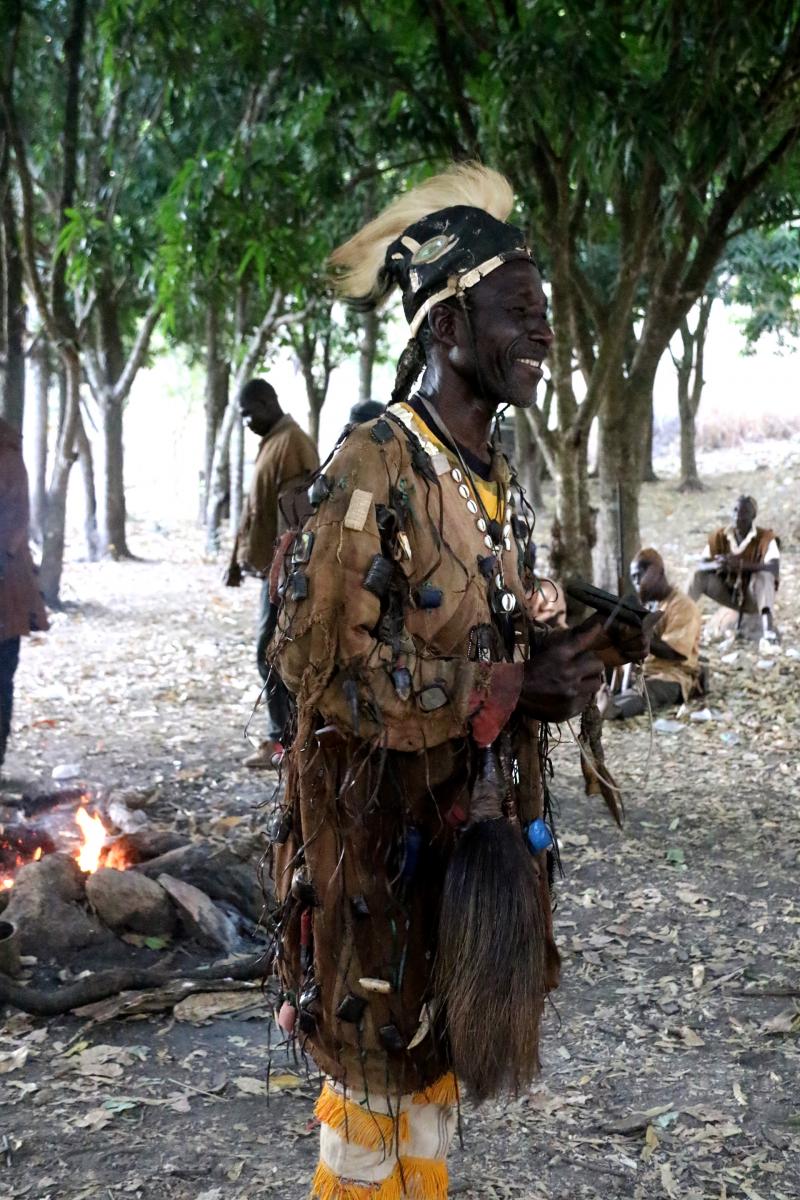