The trip to the Ivory Coast starts from Abidjan, the largest and most important city in the country and, of course, where the main airport is located.

With a population of around 5 million people, Abidjan is the economic and cultural capital of the Ivory Coast, located along the Ébrié lagoon, on islands and peninsulas created by the Vridi Plage sandbank and connected by bridges.

The nearby Atlantic Ocean is an important source for the city, both for fishing and for the ships that cross it and come here to embark the precious goods that the Ivory Coast exports: cocoa, coffee, timber, bananas, pineapples, cotton and manganese.

Abidjan boasts the largest port in West Africa thanks to the depth of its waters, that can accommodate large vessels.

Abidjan became the capital of the French colony in 1934, it maintained that position even after the independence of the country, that occurred in 1960, but had to cede the title of capital to Yamoussoukro, in 1983.

We begin our visit of Abidjan starting from the Cathédrale St Paul, the main Catholic church in the city; it was designed by an Italian architect, Aldo Spirito, and its particular shape is reminiscent of an elephant, symbol of the nation, that pushes and supports the cross and Christendom.

We arrived here on Sunday morning and it is nice to see how people go to this place as if they were going to a party, their way of living religion is very joyous, like many other aspects of their lives.

The Le Plateau district is the business area of Abidjan, here are located many banks, hotels and some skyscrapers, that are the pride of the city.

Just 3 km from the center of Abidjan is the Parc National Banco, a rainforest with immense tropical trees.

Markets are obviously a destination not to be missed, the Covered Market of Treichville and the Marché de Cocody offer everything you need, and they also host an important section of local crafts, with wonderful masks and wooden statues.

The lagoon plays an important role in the life of the city and is crossed by numerous ferries, that go from one bank to the other, to transport passengers who go to work or students; we have reached the lagoon station to be able to quickly cross the lagoon, avoiding road traffic and to enjoy a particular point of view on the city.

Do not miss the visit of Grand-Bassam.

The ancient French colonial city of Grand-Bassam, is located 40 km east of Abidjan, at the mouth of the Comoe estuary in the Gulf of Guinea; the city has been declared a World Heritage Site by UNESCO.

Grand-Bassam is a superb example of a colonial city of the late nineteenth century, the colonial settlement was in fact built between 1880 and 1950 and its buildings reflect the typical French colonial architecture of that era.

It was the French colonial capital from 1893 to 1896, when the administration was transferred to Bingerville following a yellow fever epidemic.

The Unesco site includes all the historical part of the colonial city and an adjacent fishing village; the village lies on a sandy peninsula, that separates a coastal lagoon from the Atlantic Ocean.

The city is divided by the Ébrié Lagoon into two parts.

Ancien Bassam, that represents the ancient French settlement, overlooks the Gulf of Guinea; here are the large colonial buildings, some of which have been restored while others are abandoned and have a decadent charm, the cathedral and the National Costume Museum of the Ivory Coast (Musée du Costume) that hosts interesting exhibitions of traditional clothes and masks.

Nouveau Bassam is located inland, it is connected to Ancien Bassam by a bridge and is located on the Northern side of the lagoon; in the past in this area there was the district of the African servants, now instead it is the main commercial center of the city.

The bridge that connects the two districts of the city was the scene of a historic event during the period of French colonization: a young black woman, proven by hunger, crossed the bridge in search of food in the nearby rich white neighborhood; at the time it was forbidden for blacks to enter the French quarter, only servants could cross it to go to work, but that desperate action forever changed the fortunes of the bridge and also of the inhabitants of Grand Bassam: the girl created a precedent and , from that day anyone could, and can, cross the bridge without any limits.

After the years of decline and abandonment, starting from the end of the 70s of the last century, the city began to be reborn as a tourist destination and as a craft center; today numerous resorts allow you to relax on the splendid palm-fringed beach that stretches along the Atlantic coast. 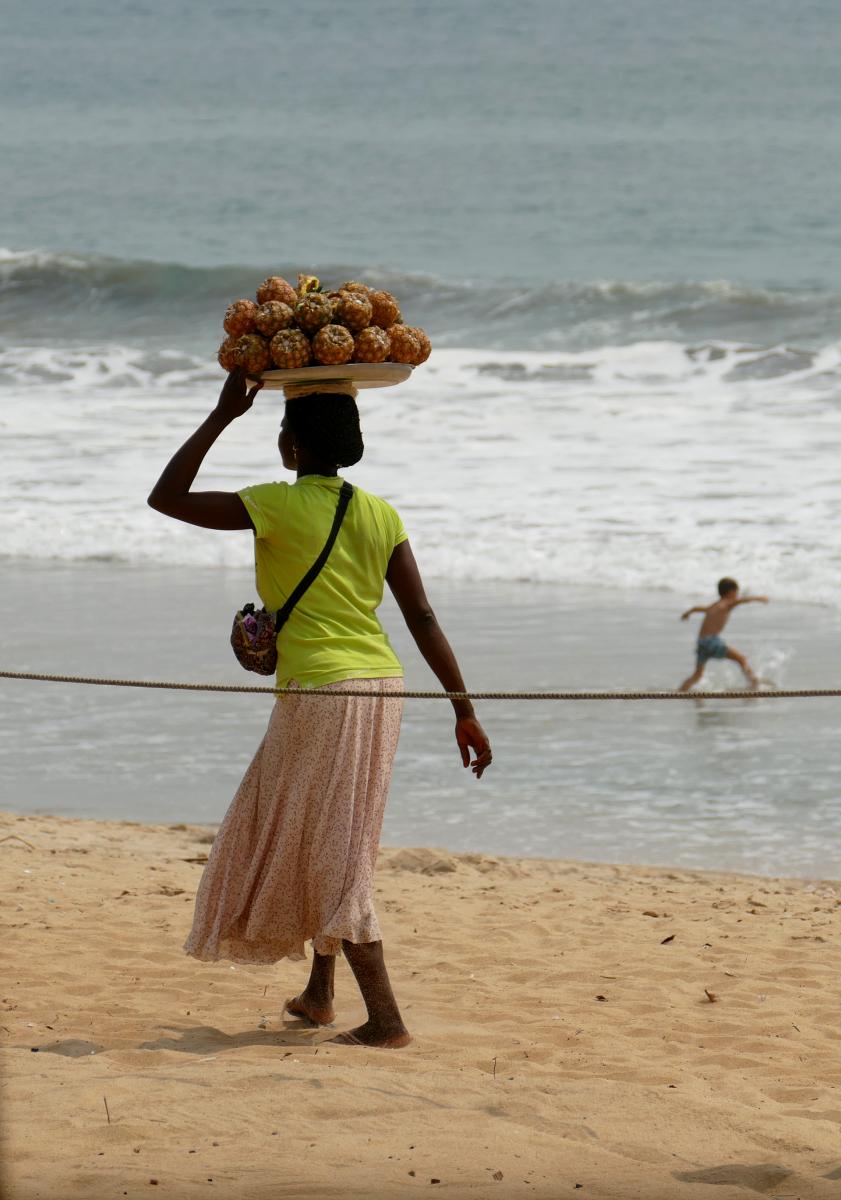