Korhogo is a city located in the North of the Ivory Coast, we wanted to visit this corner of the country immersed in the savannah because it is rich in traditions and rituals, this is in fact the territory of the Senufo; here, during the civil war, ended in 2011, the rebel headquarters was located, but today it has returned to being a quiet place where people smile and live in peace.

The ancestral culture of the Senufo continues to be a constant presence in people's lives, and traditional dances are the most incredible representation.

The traditional dances, performed during each ceremony and throughout the region, are essentially two: the N'Goron, the sacred dance or the Dance of the Virgins, and the Boloye, also called Dance of the Panther because the dancer's dress imitates the fur of the leopard, and usually closes the Poro initiatory rites.

The city was born as a result of the migration to this area, that occurred in the eleventh century, of the Senufo who left Kong, not to have to convert to the Islam imposed by the empire of Mali, and other Senufo who, from Mali, moved here in search of more fertile fields.

The foundation happened thanks to Nangui, a Senufo patriarch of the 14th century, Korhogo, still today, is the capital of the Senufo.

Immediately after its birth, Korhogo became an important market where the peasants of the region found themselves to sell their agricultural products, to these were later added the nomadic Fulanimerchants, who came here to sell their cattle.

The thriving market and its commercial activities gave the impetus to a rapid development of art and design and Korhogo soon became famous for its blacksmiths, its weavers and painters, a fame that it still maintains today.

At the end of the nineteenth century the city came under the dominion of Samory Touré and in 1898 under the control of France.

The city continued its development thanks to numerous cotton plantations and it also prospered thanks to the exploitation of the mines.

The city's decline began following the drought that hit the region in 1983 and reduced water reserves by 70%; since then this is a constant problem.

The civil war, that struck the country, was the darkest parenthesis in the history of the city, fortunately since 2011 Korhogo is recovering and is slowly returning to being the hub of trade and craftsmanship that it once was.

In the city there are three unmissable places, the market, or Grand Marché, that occupies a large part of the lands that lie to the North of Independence Square, the antique dealers’ district and the woodcarving artisans' quarter.

The Grand Marché is a vast market where practically everything is found, partly covered and partly set along the neighboring streets; it is divided into areas specialized in the sale of different products.

The area dedicated to fruit and vegetables is undoubtedly the most colorful and fragrant, but the one that has fascinated us most is the fetish zone, here the feticheur buy and sell esoteric goods ranging from horns and animal skins to dried snakes and shells.

The woodcarvers’ district is not far from the market, here are dozens of laboratories where it is possible to admire the artisans at work while carving and cutting the logs, turning them into small works of art.

You can buy sculptures and masks of any size, they are all very beautiful and the artisans are generous in explaining the symbolisms and meanings of their works.

The antique dealers' district is composed of a few dirt roads of red earth that hide secret and hidden shops that, once discovered, offer an incredible choice of collectible items.

Often these antiquarians keep a disproportionate amount of goods in tiny rooms, often it becomes difficult to move without bumping into objects.

The objects for sale come from the villages of the region, there are statues and wooden masks, small iron and bronze wooden sculptures, depictions of metal ancestors as well as other objects that are used in traditional ceremonies.

We also wanted to visit the villages outside the city, in particular that of the painters and that of the blacksmiths.

The village of Koni is the village of the blacksmiths, a place that brings the visitor back to the Iron Age, where artisans do not adopt modern technologies but still follow the ancient methods of iron extraction.

Here the furnaces smoke and in these ovens, made of mud bricks, the blacksmiths do their magic: they extract the iron from the earth that comes from the nearby mountains.

The extraction process lasts 24 hours, in the furnace layers of coal and compacted earth pallets alternate; these, subjected to enormous heat, release the iron they contain that melts and drips into the bottom of the oven.

After several hours the result of the fusion is extracted in the form of a bizarre shaped iron block, it is a mass of impure iron that must be further processed in order to extract the pure iron that is subsequently processed to obtain the finished products.

Precisely because of this "magic" that the blacksmiths perform, the populations consider them figures who possess dark magical powers and are in contact with evil spirits, capable of transforming stones into iron, of making it liquid and solid again in a different form .

The village of Fakaha is a village famous for its painters and their paintings made on a raw cotton fabric.

The drawings of these artists were of inspiration to Pablo Picasso who, in the 30s, during his travels to this land, came to this village three times; even today his work is preserved here at the village.

Near Korhogo there are also other villages, such as the weavers' villages of Katia and Waraniéné and the village of Natio focused on the production of shea butter.

Always out of town, just 5 kilometers from the market, there is a sacred site where feticheur perform ritual sacrifices; the population comes here to ask for the intervention and help of the spirits who live on the mountain.

Feticheurs usually bore a chicken as a sacrifice to the spirits; a large boulder is the place where contact with supernatural entities takes place, here are traces of blood and bones and skulls of previous sacrifices.

You can attend the ceremony but you cannot take photographs. 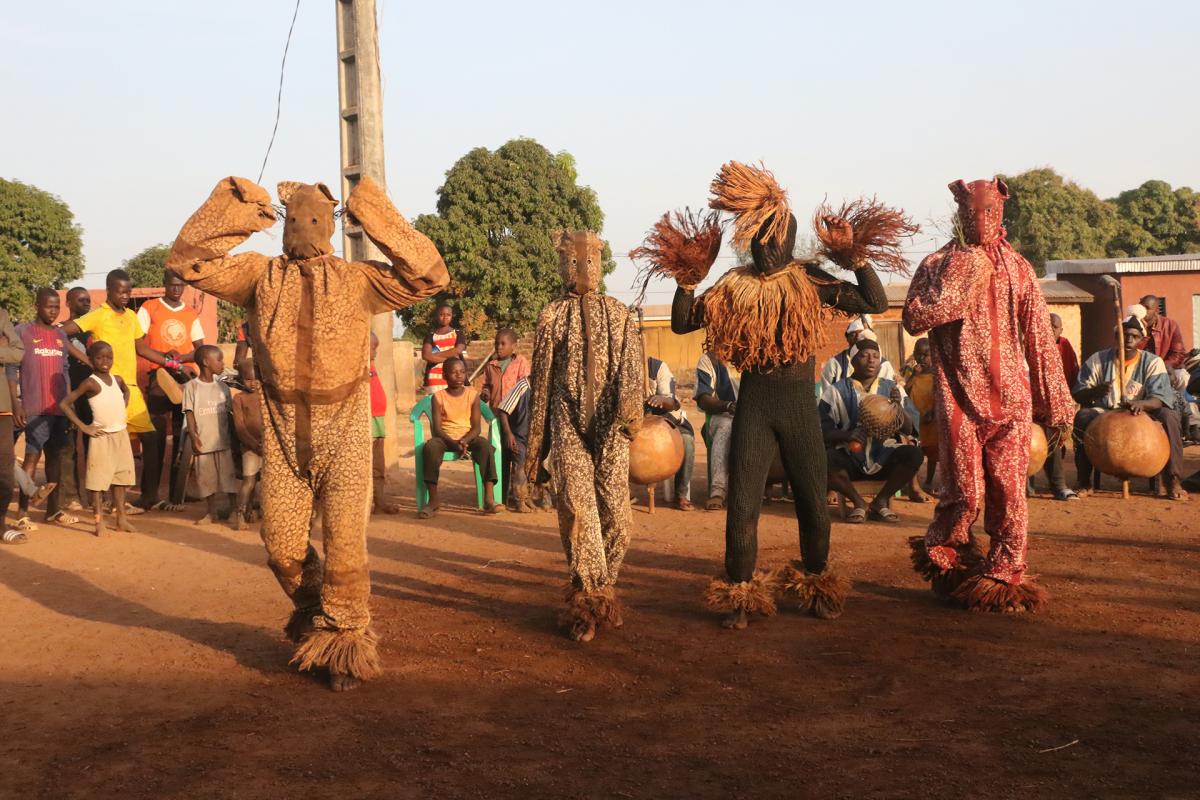