In the North East of the Ivory Coast is a sleepy town that was once the capital of a powerful kingdom, the city of Kong.

Kong became famous in the past, when it was an important trade crossroads, at that time in fact the merchants of the Empire of Mali began to trade in the territory of the Senufo.

This small city was an important point where the caravans could stop and rest, along the trade route from Mali to the Gulf of Guinea; for this reason some traders, belonging to the Mandé ethnic groups, known as Dioula-Juula, migrated here from the Niger basin in the 12th century.

The Juula merchants brought with them their skills and trade relations and transformed Kong into an international market for the exchange of goods from the Northern desert, such as salt and textiles, and the production of the Southern forests, such as cola nuts, gold and slaves.

As Kong grew prosperous, its first rulers, belonging to the Taraweré clan, combined the Juula and Senufo traditions and extended their authority over the surrounding region.

The city was conquered in 1710 by Seku Ouattara, a warrior of Dioula, who invaded the area and conquered the city of Kong, thanks to his powerful cavalry.

Kong became, under his rule, the capital of the great Kong empire, that dominated much of the region for over 150 years.

In the nineteenth century the city came under the authority of Samory Toure and, later, fell under the French colonial control, in 1898.

Of the glories of the past, little has remained in today's Kong, but two incredibly fascinating buildings have survived and bear witness to the city's precious and rich past.

The buildings are two mosques built in Sudanese architectural style, made of ocher-colored clay: the small Barrola mosque and the large mosque of Kong or Missiriba.

The heat in this area of ​​the Ivory Coast is intense and it is surprising that the interior of the mosques is relatively fresh.

The Kong Mosque or Grand Mosque of Kong, called Missiriba, was built in neo-Sudanese style, using mud and logs; it is the oldest symbol of the Islamization of the populations of the Northern Ivory Coastand has maintained its function as a place of prayer and assembly to nowadays.

The exact year of foundation is not known but some texts reveal that already in 1741 Kong had several mosques including the Grand Mosque.

The Sudanese mosques are mainly composed of a prayer hall, that is the main central space, to which is added the mihrab located in the minaret tower and facing the Mecca.

The prayer room is, in most cases, rectangular or squared; men pray to the East and women to the West; women also have a private entrance that is different from that of men.

The mosques were built with mud bricks, made by mixing the earth with small pebbles; the facades of mosques, mostly blind, are characterized by the presence of buttresses and minarets, from the walls sprout the supporting woods that form a sort of curious decoration.

The Grand Mosque was destroyed by Samory Touré around 1897 to prevent it from falling into the hands of the French; the mosque became the emblem of his resistance to colonization and was later rebuilt.

Four low openings allow access to the interior that, as we said earlier, is incredibly cool compared to the heat that is found outside; the floor is covered with fine sand and rugs for prayer.

The ceiling is the home of a colony of small bats that loll sleepily clinging to the support wood; a steep and narrow staircase leads to the roof of the building, from where you can admire the decorations made with ostrich eggs up close.

The small Barrola mosque is very pretty, of modest size; it also has a traditional Sudanese architecture, made of clay towers crossed by wooden beams.

Struck by the sun, its warm color is particularly beautiful; behind it stands the small Imam cemetery, while in the front yard there are several mud bricks and pebbles that are used for the mosque maintenance. 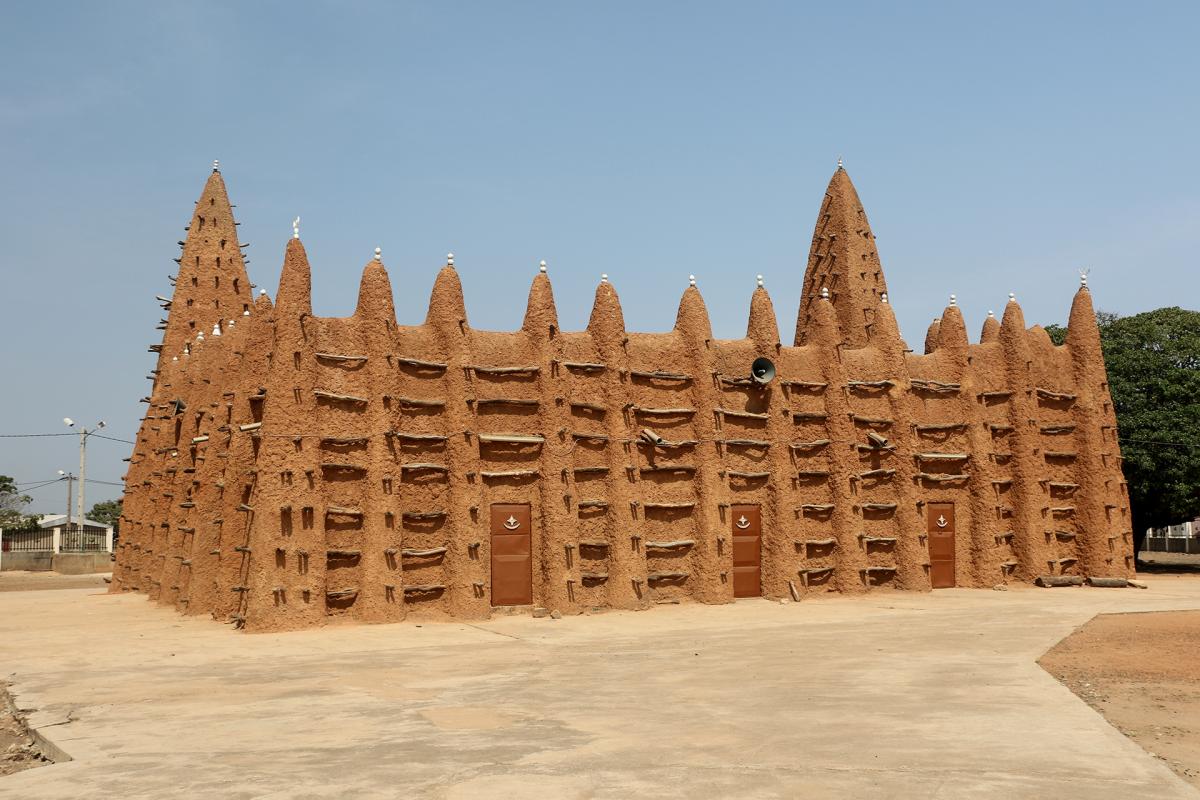