During our trips we love to deepen our knowledge of local populations, and there is nothing better than meeting people of different ethnic groups to understand their traditions and their lifestyle.

In the Ivory Coastthere are more than 60 tribes and the main one is represented by the Baulè, or Baoulè, who represent about 23% of the population of the country and belong to the Akan group.

The Baoulé live mainly in the central part of the country, near the cities of Bouaké and Yamoussoukro, where the savannah meets the equatorial forests; still today, these people keep their own traditions and rituals based on ancestral dances and masks.

The Baulè are a population of farmers and their lands are characterized by the presence of rich coffee and cocoa plantations, but one of the most important crops is the yam.

The yam is a fundamental element in the diet of this population and this is demonstrated by the annual harvest festival, during which the first harvested yam is symbolically offered to the ancestors, whose cult is a very important aspect of the Baule religion.

The Baoulé are traditionally animists and, despite the introduction of new monotheistic cults, such as Christianity or Islam, the vast majority continues to follow the traditional religion.

They believe in a creator god, Nyamian, and his two sons, the buffalo god Goli and the monkey god Gbekre, as well as in the earth goddess Assie; they think that these deities influence the destiny of the world and the destiny of humanity by controlling men and animals.

They also believe in the existence of spirits, or Amuen, who are endowed with supernatural powers, and also in the afterlife, in which the soul of the ancestors resides, who are worshiped but not depicted.

The Bonu Amuen, the bush spirit, protects the village from external threats and appears in the most important ceremonies.

The bush spirits have their sanctuaries, that are the place where they receive sacrifices; these sacrifices are necessary to ensure that the spirits retain their powers.

The spirits intervene in the life of the community, and they do it thanks to the ritual dances in which they take the form of a mask, that consists of a wooden facial effigy, of raffia and fabric costumes and metallic anklets.

We visited a village to admire the Goli dance, a sacred dance that, originally, lasted a whole day, involved the whole village and provided for the presence of more masks alternating to celebrate special ceremonies.

The masks never represent the ancestors, but only the gods, and are always worn by men; each mask is linked to a specific dance, with a mask we mean the whole costume and not just the part that covers the face of the dancer.

Mblo is the name of a mask with a human face used in solo dances, the Mblo masks, are used in entertainment dances and represent one of the oldest Baule art forms.

These refined masks, with a human face, represent idealized faces, with high foreheads and large eyes looking downwards, while on the head they present various ornaments: birds, combs, horns, faces and other decorative motifs, that are chosen for their beauty and have no iconographic meaning.

Usually the mask has a wide raffia skirt and a cloak of fabric as well as metal anklets, the dance alternates very fast phases with vaults and more sinuous steps; sometimes the mask comes close to a person or more people who attend the dance to give his blessing.

The mask called Kple Kple, who represents the buffalo god Goli and is the most sacred mask of the Baoulé pantheon, is a mask appearing only on special occasions.

Goli is the son of Nyamien, the god of heaven, he is a protective deity and the mask represents a mediator who works to establish a link between the invisible and the visible.

The Kplè Kplè is always made up of a pair of masks, the male is depicted with a dark facial mask, usually blue or black, while the female mask is usually red; both wear a costume that is entirely made of raffia fringes.

The male mask also has a flat face, the eyes usually have an oval shape and the mouth is rectangular; furthermore the mask also has two horns on his head, representing the power, strength and horns of the buffalo god, while the round head represents the sun.

When they dance these masks move at an impressive speed, raising the dust and creating a hypnotic effect; they are fascinating and the music that accompanies their movements dictates the rhythm of the dance.

The most beautiful mask, in our opinion, is the one called Goli Gloin: a mask who wears a costume composed of numerous fronds, not only of raffia but also of palm, sometimes intertwined, to emphasize the association with the wild nature; he also wears a cloak of antelope skin and a sort of wooden helmet, that depicts a sort of animal with long horns, open jaws and clearly visible teeth; he could be scary.

This mask always presents themselves in pairs, the two masks emerge from the forest together, where the bush spirits, the Bonu Amuen, live and go to the village.

Women and children can see these masks but avoiding getting too close to them and above all they must not touch them.

These masks also dance at an incredible speed, the beginning of the dance is given by a kudu horn, that is played by a chosen person who communicates with the mask.

The other components of the orchestra accompany the horn playing large pumpkins, called "toha", on which rows of shells or seeds are tied; shaking the pumpkins they create a maracas-like sound.

The horn, in addition to serving to communicate with the mask, also calls the rhythm of the dance, increasing the speed inciting the mask to dance faster and faster.

It is a unique experience to witness these dances, the speed of the movements together with the sound of the horn and the pumpkins transports the public into a surreal and hypnotic dimension that fascinates and enchants. 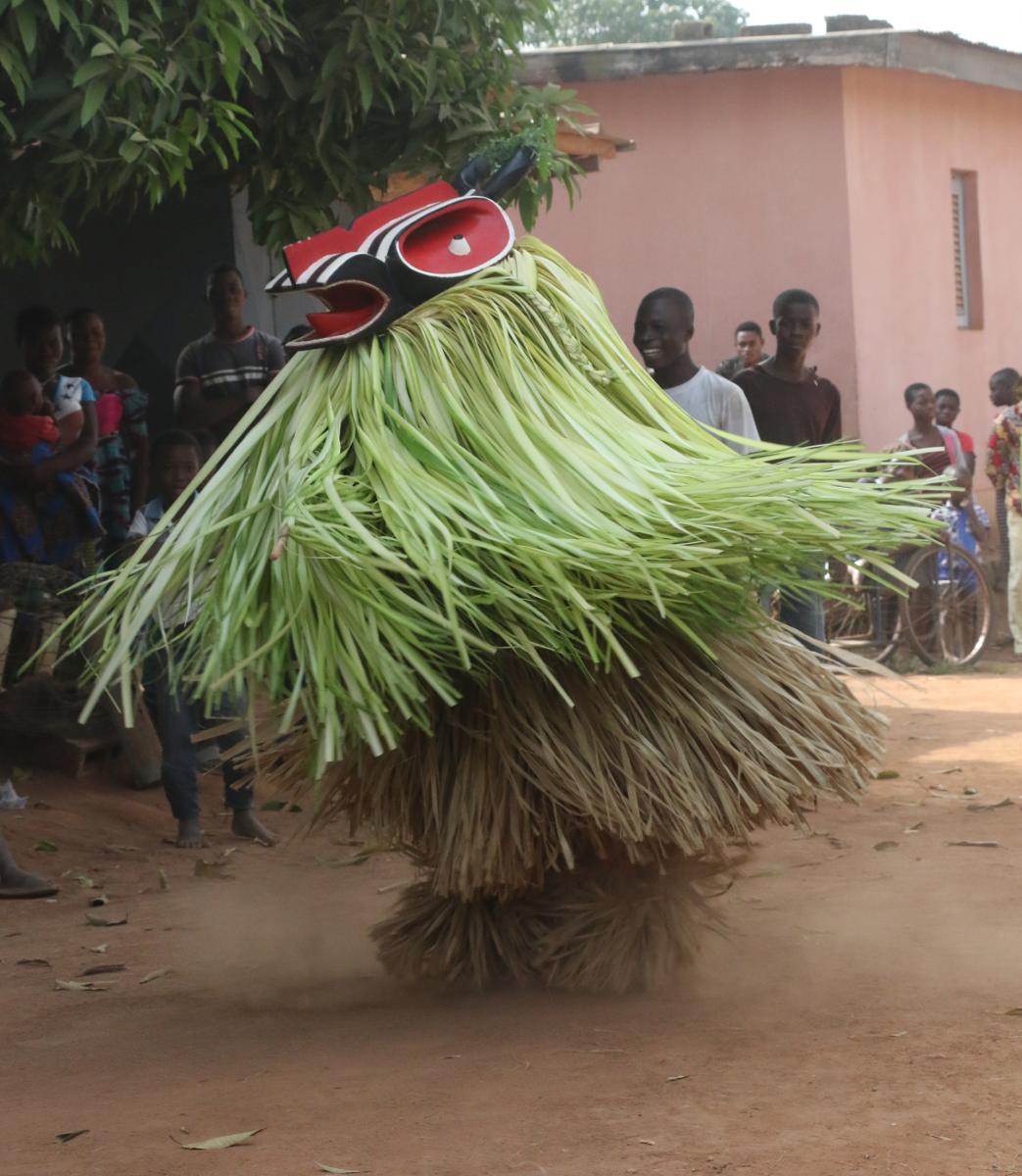