Our journey through Eastern South Africa could not end without deepening our knowledge of the country's main ethnic group: the Zulu.

In order to know their traditions and their lifestyle, we went to the South African province of KwaZulu-Natal in a cultural village dedicated to this proud population of ancient warriors.

Although they are now integrated with the rest of the South African population, the Zulu still strongly identify with their past, their warrior ethic and their rich history are clearly reflected in the traditional Zulu ceremonies that are still being celebrated today.

The Zulu belong to the group of the Ngoni, that also includes the Swazi, the Xhosaand theNdebele.

The Cultural Village of Shakaland is dedicated, as its name says, to the great King Shaka, a figure who embodied the warrior spirit of this population; it was under the reign of Shaka that the Zulu nation experienced its maximum splendor.

The powerful warrior king Shaka transformed the war strategies of the Zulu and created the assegai, a short spear with the tip broad as a saber, that revolutionized the fighting tactics of his people and, thanks to the successes that followed, the Zulu nation became famous as one of the most formidable military forces in Africa.

The Zulu define themselves as abakwaZulu or the "people of the heavens" even if the definition strides a bit with their past as proud indomitable warriors, able to defeat the neighboring populations and the powerful English army.

Among their characteristics, that distinguish them, there are those to color their faces with a red substance, to protect themselves from the sun, and their particular traditional clothes.

As for other African populations, clothing and accessories are an important ornament that reflects the social status and life phase of the wearer.

The clothing for unmarried girls is quite succinct, a simple skirt decorated with colored beads is practically the only garment they wear, the bust and the breasts are uncovered.

The cylindrical hat that widens at the top is an iconic accessory of the Zulu women, who wear it on every occasion; in the past it was made by intertwining grass and straw, but today it is made of cotton with very bright colors.

Men have a very essential clothing consisting of a kilt of calf leather and accessories that derive from their warrior past.

In fact, they tie the skin of the ends of the cow's tails to the arms and ankles, in order to look bigger and look more aggressive.

In the past the Zulu kings wore a stole on their shoulders, made from the leopard fur, the feline was in fact considered the most powerful predator and the most elegant and proud.

The Zulu society is patriarchal, with clearly defined rules that dictate the duties of the members and regulate the good manners and behavior of subordinates towards the superiors, such as women towards men and the younger ones towards the elderly.

Zulu men and women are skilled craftsmen and use their skills to create objects for everyday use such as mats, baskets and containers, even ceramics is an important element of the Zulu tradition.

Singing and dancing are an integral part of the Zulu lifestyle, dance is very energetic and traditionally performed only by unmarried women and men; men traditionally incorporate typical movements of combat and hunting into dance.

In Shakaland there is a Zulu village, the traditional Zulu huts have a dome, with a supporting structure in woven wood and covered with straw and intertwined grass; one can visit the village alone or accompanied by a guide, the latter is the best solution as he will tell you all the customs and traditions; it is a very interesting experience.

Shakaland, is not only a place to know the Zulu culture, but it is also a lodge; this consists of a series of huts, that are inspired by the traditional Zulu ones, although they are equipped with all the comforts, but still give a very suggestive atmosphere. 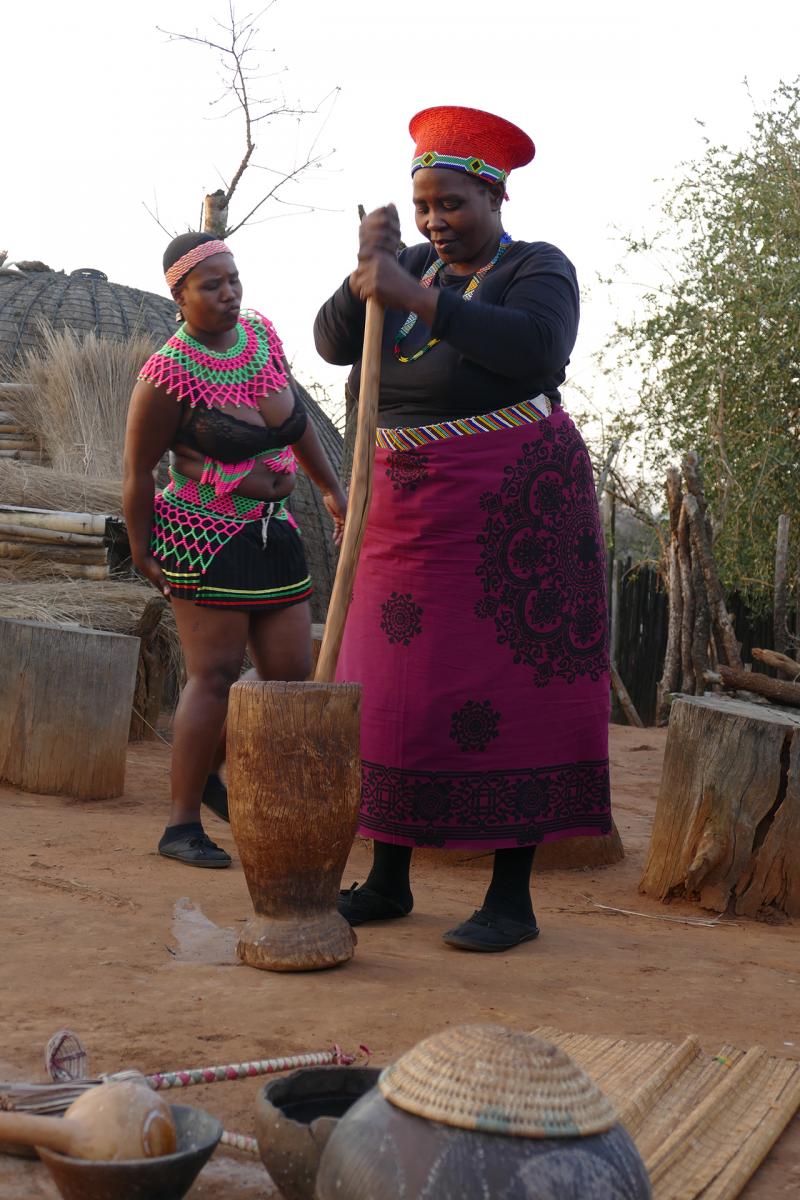