During our trip to South Africa we tried to get to know the local populations better and discover the traditions that are still handed down today.

The stormy past of South Africa, with the dark years of colonialism and apartheid, has erased most of the traditions and celebrations of ancestral populations, but despite this and despite the advent of Western and Middle Eastern religions, some populations have kept alive their ancient traditions.

Among the populations we have met are the Xhosa, the second largest ethnic group in South Africa after the Zulus.

The Xhosa belong to the Bantu family, originally from central Africa; from this area, in the past, they emigrated to the South, looking for fertile lands and new pastures.

The Xhosa, called the red people because of the red clothes they usually wear, is the ethnic group to which the most famous South African character belongs: Nelson Mandela.

During our stay at the Lesedi Cultural Village we had the opportunity to talk with some Xhosa who told us some stories and habits of their population.

A fascinating aspect of this ethnic group is their language, in fact they speak a Bantu language but, over the centuries, have acquired the "clicks" typical of the language spoken by the Sanand the Khoi; this has led to the creation of a different and unique language.

The Xhosa only use three different types of clicks that resemble the letters c, q and x and it's incredible how they can speak very fast by inserting those sounds that are almost impossible for us to reproduce.

The clothing of the Xhosa has a fairly complex code, red and orange are the main colors that are used for clothing, that changes according to the social position of a person and according to the phase of his life.

The dresses are enriched and decorated with precious workmanship made with colored beads, glass beads, seeds and shells and other materials that make the garments true masterpieces, as well as the long and elaborate necklaces of beads and the bracelets.

Married women wear a characteristic accessory, a headgear that is a kind of colorful braided turban, this too has different styles depending on the wearer and her status, for example the headgear of a newly married girl will be different from that of a woman who has just given birth to the first child.

Among the accessories made by the Xhosa, and enriched by colored beads, there is the traditional pipe that men and women smoke every day, the pipe is made of wood and is covered with colorful beaded decorations.

The pipe used by women is considerably longer than that used by men for a simple reason, bringing children on their back the smoke would go in the face of the little ones, a long pipe avoids this inconvenience by moving away the smoke.

The traditional religion of the Xhosa is animism, they believe in the presence of malevolent and benevolent spirits and in a creator god, the role of the ancestors, as a connection with the spiritual world, is considered very important and they are celebrated and respected.

The arrival of European missionaries and Christianity has partly changed the religious vision of the Xhosa and today the majority of the Xhosa practice syncretism, that is a fusion of Christianity and traditional tribal beliefs.

Despite the external influences of other religions, the Xhosa also believe in the spiritual importance of dreams, magic, sorcery and witchcraft.

There are such figures as witches and sorcerers, who have the power of divination, spiritual healers, who liberate those possessed by malevolent spirits, and herbalists, who practice traditional medicine, knowing the properties of different herbs.

The traditional Xhosa houses are simple usually made of mud, grass, wooden poles and other natural materials.

The mud huts are circular in shape, a family can have one or more of these structures in their own plot of land, since different structures can have different destinations: housing for the elderly or for married children or they can be used as a kitchen.

Currently, however, these mud houses are replaced by the modern housing systems, made by the government for the development of the Xhosa villages.

Among the traditions that are maintained by the Xhosa there are certainly singing and dancing.

Other rituals are related to the stages of life, birth, marriage and death.

Even in these cases some traditions have been lost in time, in the past, for example, the future bride was kidnapped by her suitor and later defined the quota that the latter had to pay to the bride's family.

Now the kidnapping is no longer practiced, if not in some remote corner of the countryside, and the boyfriend meets the bride's family to decide the "price" to be paid.

After the wedding is celebrated, the party lasts three days during which a goat is sacrificed to the ancestors and ends with the bride's entry into her husband's house.

Once the girl is officially married, she dyes her face with white clay and wears the traditional turban. 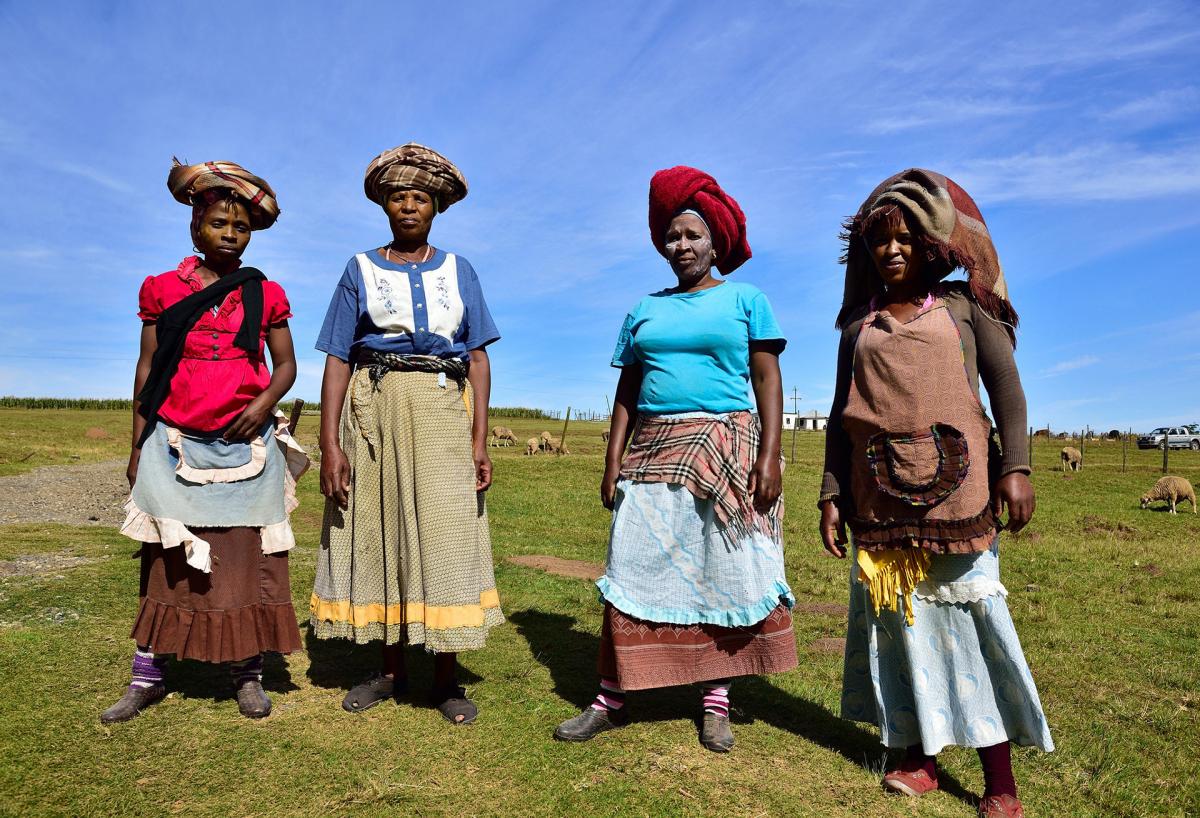