The first national park we visited during our trip to Eastern South Africais the Mapungubwe National Park, in the far North-East of the country, in the province of Limpopo, on the border with BotswanaandZimbabweand at the confluence of the Limpopo and Shashe rivers.

Mapungubwe is part of the larger cross-border park of the Greater Mapungubwe Transfrontier Conservation Area, that includes the Tuli Game Reserve in Botswana and some reserves and natural areas in Zimbabwe.

The Mapungubwe National Park is a UNESCO World Heritage site and here was the capital of an ancient civilization, whose reign lasted from 1050 to 1270.

The area in which this national park is located has always been an important and sought after area both by humans and by animals; the archaeological finds, that were found here, allow in fact to affirm that, in this territory, men have been present for at least 1000 years and perhaps more.

The history of this important archaeological site is told very well in the museum, that stands within the park and not far from the main gate: the Mapungubwe Interpretive Center that, in addition to being voted World Building of the Year in 2009 to the renowned World Architecture Festival Awards, due to its architecture that blends perfectly with the surrounding territory, allows to know the lost civilization who lived in these lands in the past.

The marvelous interpretive center and the museum host numerous displays that tell the story of the most ancient kingdom of Southern Africa, even older than the kingdom of Great Zimbabwe.

The museum houses some of the archaeological treasures that have been unearthed in this place, that is considered as the most important site of the Iron Age in South Africa.

Among the exhibits, the most important is, without any doubt, the golden rhino; once it was a small wooden statue of gold, depicting a rhino, today, of this statuette, only the gold cover remained, while the wood inside has worn out over time and is no longer there.

This delicate object is not only the symbol of the park but, above all, represents the most elegant and refined heritage of an important kingdom that dominated the area for over two centuries.

The Mapungubwe National Park is also a great natural attraction, as well as an archaeological one; in the park there are many elephants, leopards, kudus, hyenas, baboons, giraffes and some specimens of white rhino and sometimes lions and wild dogs that trespass from Botswana.

We spent two days in this park, we chose the Leokwe Camp and it was a great choice, the camp is in a beautiful location surrounded by baobabs, by red rock walls; also from here you can enjoy an excellent view of the sunset.

The cottages are spacious and the terrace, equipped with a barbecue and two wooden armchairs, is spectacular, it is the ideal place to relax after the safari drinking a glass of wineand enjoying an incredible sky full of stars.

During our stay we visited some of the most iconic and scenic spots in the park, the roads are in good condition although in some places a car with a higher base is needed.

Mapungubwe is known for its beautiful and wide view of the Limpopo river; a series of viewing platforms, that overlook the river, allow you to admire spectacular views, especially those at the confluence of the Limpopo and Shasherivers.

The observation points at the Confluence, where the rivers Shasheand Limpopo meet, and where Zimbabwe,Botswanaand South Africaunite along the banks of the river, are absolutely not to be missed.

On a promontory there are 5 wooden terraces, that offer a wide view of the river valley; from here you can admire the winding stream of water, the huge baobabs and, with the help of binoculars, you can see elephants, kudus, impalas and wildebeests in the plains below.

We went to admire the sunset, a breathtaking show.

The Mapungubwe National Park is one of South Africa's best birdwatching destinations, with over 450 recorded bird species; we have tried to identify the Big Six of the birds present in the park: the Pel's Fishing Owl, the Martial Eagle, the Lappet-faced Vulture, the Southern Ground Hornbill, the Kori Bustard and the Yellow-billed stork; besides here it is possible to admire the magnificent Verreaux Eagle.

The great biodiversity of the Mapungubwe National Park is also reflected in the numerous species of plants present.

Along the riverbanks, in particular, there are greater concentrations of plants and large trees including baobabs, nyala trees, Combretum imberbe or leadwood trees, fever acacias, mopanes, marulas (Sclerocarya birrea), figs  (ficus) and the Commiphora; the latter are called Kanniedood, or "do not die" in Afrikaans, because during the winter they seem dead even if they are not at all.

Not far from our camp is the Tree Top Walk, a wooden suspended walkway that overlooks the banks of the Limpopo and allows to observe the trees from a privileged position, to help the species recognition the park rangers have installed plates with the scientific name of the plant.

The elevated walkway allows to spot the animals that go to the river to drink, we have witnessed a beautiful scene of about twenty elephants, including many puppies, that in the morning crossed the river bed drinking and sprinkling with sand.

In the park you can also do night safaris with the park rangers to have the opportunity to observe the twilight or nocturnal animals, we have chosen to wait on the terrace of our cottage hoping to see a leopard.

We did not see it, but it certainly passed by in the night because in the morning we saw its footprints in the sand. 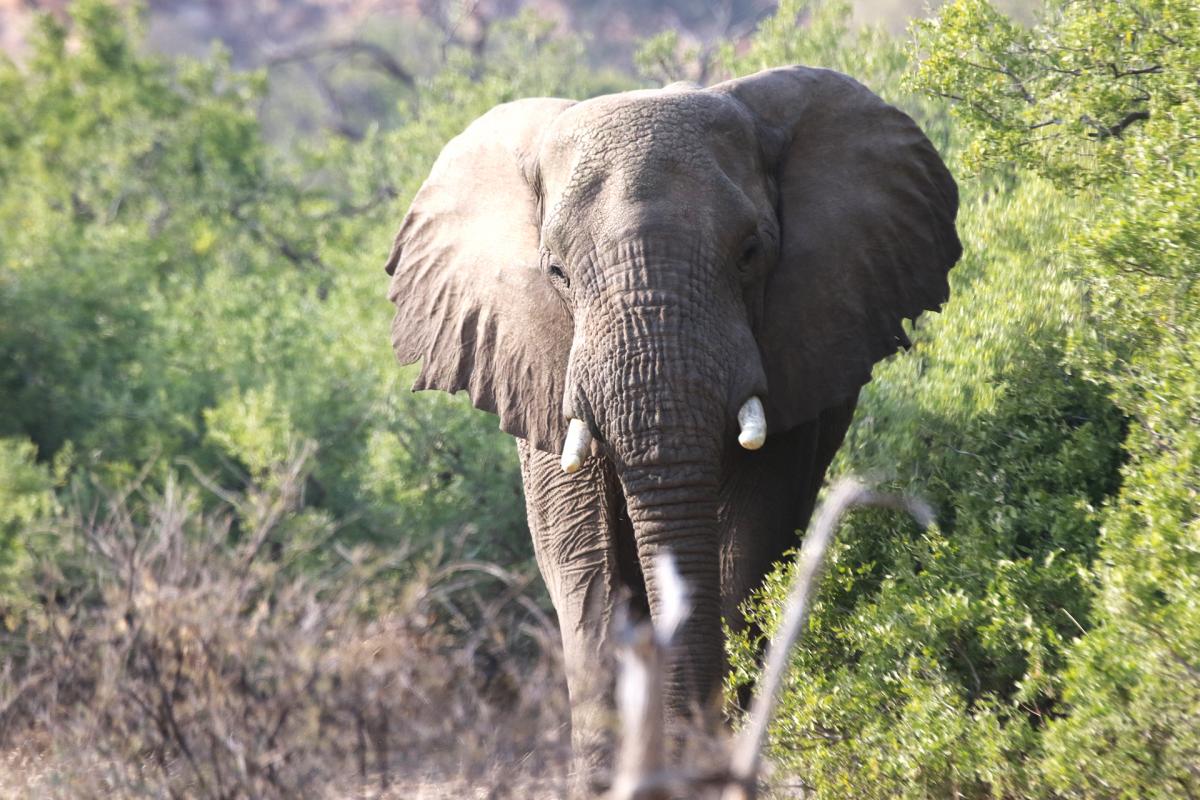