Tracking the Great Migration from January to March

The migration starts in the early months of the year in the fertile plains of the Southern Serengeti and the Ngorongoro Conservation Area where the soil is rich in minerals and makes the grass of this area particularly nourishing.

The short rainy season has just come to an end, the landscape is bright green and the puddles and lakes are full of water, unlike in the dry season when the soil is dusty and drought.
There can be occasional showers in this time of the year and the herds move around in the area disorderly where rainfalls are likely to occur.
It’s the time of mass birthing: around 400,000 calves, accounting for 90% of births, come to light in just three weeks, after over eight months of gestation.
This sort of "synchronized" delivery increases the chances of survival of the species.
Many predators flock here to witness the event, but the multitude of puppies born at the same time give them more chances to survive the danger, although many of them will end up in the mouth of predators.
The birth of a wildebeest is surprising.
This animal has the best coordination ability and can stand on its legs in just 2-3 minutes after birth, join the herd in just 5 minutes and run faster than a lioness.
However, many cubs die in their first year of age due to different causes: predation, malnutrition, thirst, fatigue or illness and drowning.
In March, the fertile savannah of the Southern Serengeti begins to dry due to the lack of rainfalls and the exploitation of pastures.
The herds then group up around the lakes and rivers where they can still find some water.
At Olduvai, better known as the cradle of mankind, where the remains of our hominid ancestors were found, the discovered rock engravings depict migration scenes, which is the tangible evidence that the Great Migration has occurred for over a million years.

Where is possible to spot the herds of Great Migration in January, February and March

Lake Ndutu and Lake Masek: The low grasses of the surrounding savannah are rich in minerals, which are excellent for the nursing of wildebeest puppies and zebra foals.
Both salt water lakes are surrounded by marshlands.
This is one of the last areas the herds leave before starting the Great Migration, because this is where they can find water more easily and for longer.
Here, besides the migrating herds, you can find resident animals, such as elephants, ostriches, jackals, giraffes, gazzelles, impalas, hippos, crocotiles, leopards, lions, spotted hyenas, striped hyenas, caracals, cheetahs and more then 400 birds species.
Numerous other animals, especially carnivores, flock here because of the presence of so many herbivorous: various species of vultures, african wild dogs and lions, leopards and striped hyenas, which usually do not reside in this area.
Kusini: It is located at the most South-Western end of the Serengeti, where the savannah gives way to a hilly land that gradually becomes mountainous as you reach the Maswa Reserve.
Elephants, buffalos, cheetahs and lions permanently reside here.
Moru Kopjes: This area is located in the Central-Western side of the Serengeti and links Ndutu to the river Seronera valley.
The abundance of water in the river and the seasonal pools favour the herds to scatter in the area.
Here pastures are less nourishing but there is plenty of water and feed.
Giraffes, buffaloes, antelopes, lions, leopards, rhinos, servals and caracals reside here, but you need a good dose of luck to spot them all.
Goals Kopjes: In this remote and wild area of the South-Eastern Serengeti you can find numerous lions and cheetahs.
Seronera: In this area there is the highest concentration of leopards, and therefore here you have more chances to spot one.
They have chosen this area due to the presence of a perennial water stream and the trees on which they use to drag their prey and eat them safely far from other predators.

Discover the location of the Great Migration month by month

The time has come to go home
END_OF_DOCUMENT_TOKEN_TO_BE_REPLACED 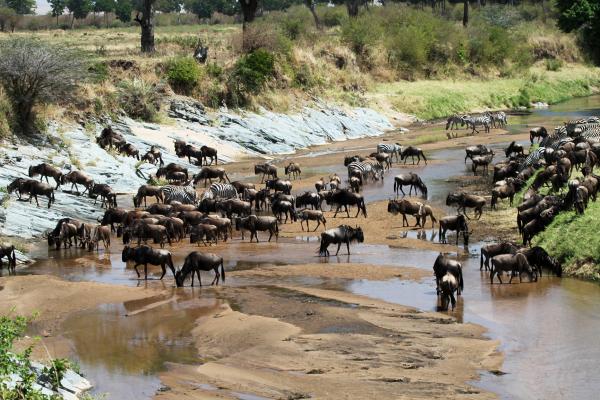 The stages of the Great Migration in Serengeti National Park

Tracking the Great Migration from January to March

Tracking the Great Migration in April

Tracking the Great Migration in May

Tracking the Great Migration in June

Tracking the Great Migration in July

The Great Migration from August to October

The Great Migration in November

The Great Migration in Serengeti National Park: return to south

The Great Migration in December