The alternation of seasons and the Great Migration

The Great Migration in Serengeti National Park: crossing Mara River - Photo Credits: Romina Facchi
The Great Migration is a spectacular event, one that has occurred for millions of years, regardless of the rest of the world that has much changed since then.
The pace of this endless wandering of wildebeests and zebras is marked by the alternation of seasons, and subsequent rainfalls, which turn green the vast pastures and bring water, hence life, in areas of the park that would be otherwise arid.
When the rains come, the wildebeests perceive them from far and, as it happens from immemorial time, start marching, following their survival instinct, in search of green pastures and water.
The Great Migration is a unique and fascinating event that has occurred in the Serengeti for thousands, probably millions of years; as it is witnessed by the rock carvings discovered at Olduvai.
Every year, more than two millions herbivorous, mostly wildebeests and zebras, run along an 800 kms loop in a clockwise direction within the Serengeti Ecosystem.
The Serengeti ecosystem encompasses the Serengeti National Park and the Ngorongoro Conservation Area in Tanzania, the Maasai Mara Reserve in Kenya and some neighbouring reserves.
As they move along the track, the herds encounter numerous difficulties and obstacles that need to be overcome.
The continuous search of new pastures and water dependence are the two main reasons that make the Great Migration exist, but it is the alternation of the seasons, and the resulting rainfalls, which sets the pace and determines the movement of herds within the park and their location during the year.
The journey of the wildebeests and zebras begins in April when, at the end of the short dry season, the pastures of the Southern Serengeti and the Ngorongoro Conservation Area are starting to dry up and be overexploited; with the heavy rain season, herbivorous point  towards the centre of the Serengeti and to the West, close to the lakes.
From here they will move at the end of the rainy season to start the long journey that will take them, during the long dry season, first to the West, where they are going to cross the Grumeti River and then farther and farther North.
In July they finally reach the Serengeti Mara and the Maasai Mara, after crossing the great Mara River with all its dangers.
The herds stay in these areas until the end of the dry season, where they find plenty of pastures enough to feed them all and the water on which they depend for survival.
When small rains start, the Great Migration sets off and heads South to return to their favourite pastures rich in nutrients.
It appears that the wildebeests, as well as being guided by their instinct, can perceive the rain and the lightning from far and this guides them on their way, in the continuous search for rain, new pastures and water.
Kenya and Tanzania lie near the Equator in an area where there are two types of seasons: the dry season and the rainy season, and this alternation is right the engine that drives the Great Migration. 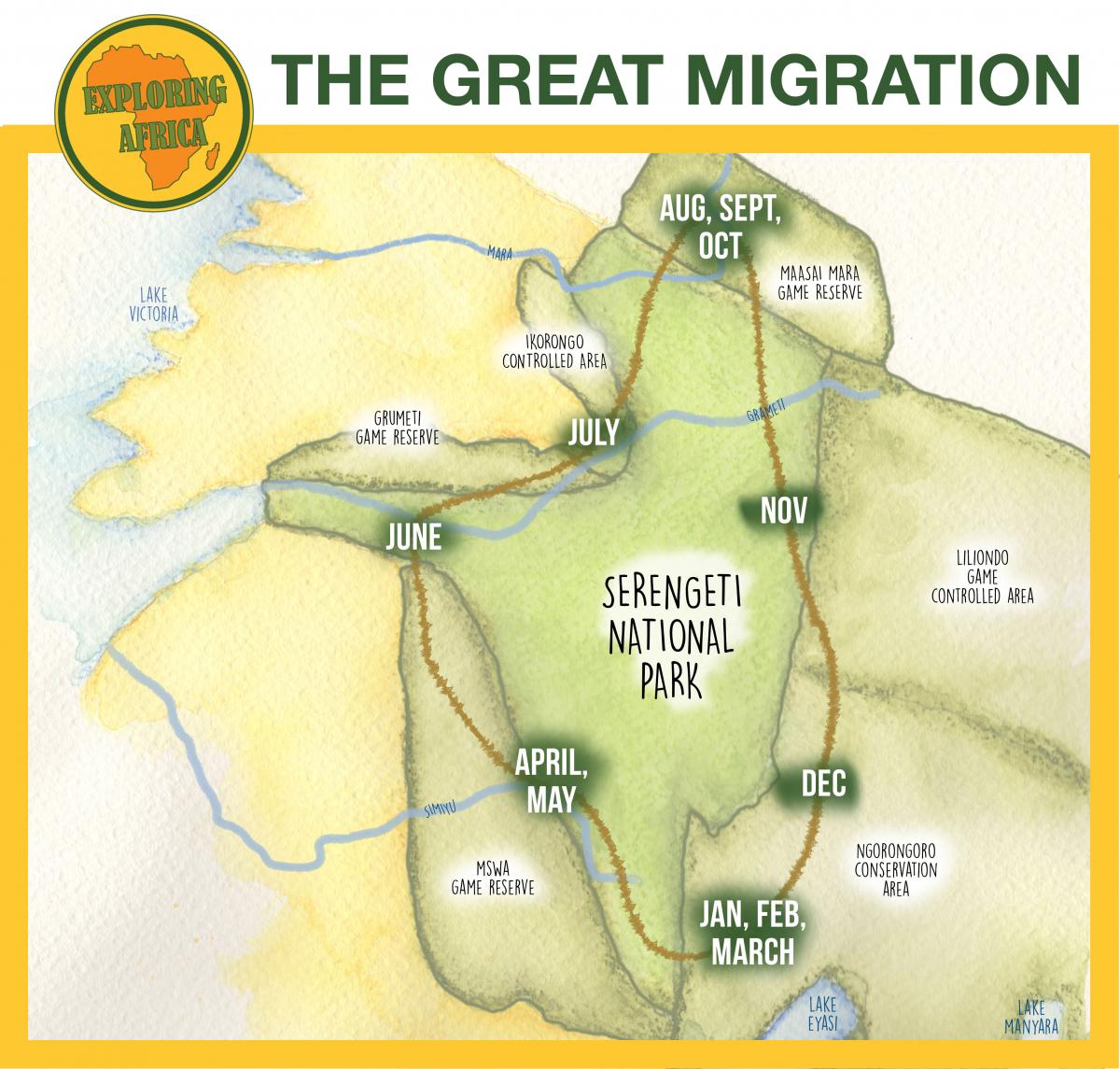 The time has come to go home
END_OF_DOCUMENT_TOKEN_TO_BE_REPLACED

The Great Migration and the short dry season

The Great Migration and the long rain season

The Great Migration and the short rain season