Twyfelfontein is an archaeological site declared a UNESCO World Heritage Site and famous for its numerous rock paintings and engravings made by the primitive populations who inhabited these difficult and inhospitable lands for over 10,000 years.

The petroglyphs, that are thought to have been made by the Sanwho inhabited these lands since the ancestral times, are dated from 1,000 to 10,000 years ago and were made without the use of metal tools, but only with the help of quartz tools, as evidenced by the numerous findings discovered in the area.

The engravings were discovered around 1914, although there is no definite date about it, by Reinhardt Maack who later published a report in 1921 to the Southwest African administrator, his writings aroused much curiosity about the site.

The valley, where the archaeological site is located, was however declared a national monument only in 1952 to stop the common theft of rock carvings and, in 2007, was declared a UNESCO World Heritage Site, an important recognition for one of the major concentrations of petroglyphs in Africa.

What differentiates Twyfelfontein from other archaeological sites in the world is that the artists who made them do not belong to a population now extinct, but were made by the San, a population who, even today, lives in these lands; this aspect is shared by Twyfelfontein with the Tsodilo Hills in Botswana.

Local populations had called this place / Ui - // Ais, that means "permanent source"; this was a place to move and camp during the dry months, or during periods of prolonged drought, to obtain the water necessary for survival.

Curiously the name Twyfelfontein means 'uncertain source' in Afrikaans, and dates back to David Levin, a topographer from Mariental, who, at the end of the forties, moved to the valley with his family, arriving here with a donkey cart, after following an elephant track.

David Levin later, in 1948, bought the land and gave it the name Twyfelfontein because the only source in the area was scarce and a source of constant concern, and he was not sure if the source would provide enough water for his animals and his family.

Twyfelfontein incisions differ from those found at other sites; in fact, the incisions and the paintings are usually found under spurs of rock or inside caves, while these incisions are found outdoors.

Large flat rocks constituted the ideal work surface for the San who, carving, engraving and abrading the rock, created the shapes or patterns they desired.

Working the rock the San managed to engrave and remove the outer layer of the rock, a kind of dark-colored patina that had formed over the centuries, thanks to the action of atmospheric agents, and reach the underlying rock of an intense orange color.

Over the centuries the engravings have been oxidized and this process has helped to "seal" and preserve these works of rock art.

At Twyfelfontein there are over 2,500 incisions depicting numerous species of wild animals, including rhinos, giraffes, oryxes, ostriches, kudus, zebras, some elephants and lions, there are also numerous human and animal prints, a series of geometric shapes and some unusual images of seals and flamingos; the sea is about 100 km from here but it is thought that the San reached the coast to get supplies of salt and on these trips they had got to know these animals.

At a first superficial analysis, the figures, the footprints, the strange geometric shapes and the animal figures, that cover the stones, seem to tell the story of the hunter and the prey.

In reality it is thought that these incisions have a different meaning, deeper and tied to shamanic rites.

It is believed that the rock art at Twyfelfontein was built during the dry season of the year, when the lack of water and food forced people to gather near the spring; during this period there was also an intense ritual activity, above all linked to the propitiation of the rains, these rituals contributed to strengthening the values ​​and the cohesion of the group.

Scholars think that much of the rock art of this site is the representation of what the shaman saw while he was in the spirit world, this is also the reason why many of the incisions are placed near cracks and crevasses, it was believed in fact, these were the points of access to the supernatural world.

The rock art was therefore reserved for people of medicine, or shamans, and had two functions: as a means to get in touch with the world of the supernatural and to note the experiences of the shamans in that world, that is the representation of what the shaman saw while he was in the spirit world.

The shamans entered the realm of spirits through the achievement of a state of trance, or altered consciousness, through dance and hyperventilation, but also thanks to some incisions on the rock; in fact the chipping on the rock and its repetitive sound and single tone could have contributed to mental concentration.

Each feature of an engraving is intentional and has a specific meaning: for example, the kudus were powerful symbols of fertility, the famous engraving of the "dancing kudu" depicts a female pregnant kudu, other animals such as elephants and oryxes were respected and admired for their ability to find water, as well as wildbeests and springboks.

Giraffes are very common subjects in the rock art of Twyfelfontein, their legs have been depicted without hooves as if they were flying in the air, this represents the sensation of rising in the air experienced by the shaman during the trance.

In one representation a giraffe has five horns, in reality they are not horns but rather the hand of the shaman who turns into a giraffe in the spirit world; moreover, the giraffes for the San were a powerful way to create rains; the long neck allowed them to reach the clouds and, using the horns, to create the rains, so precious in an arid place.

Even the very famous "lion man" represents the transformation of the shaman from man to lion in the spirit world, the lion is in fact represented with five fingers per leg, while in nature it has only four, and also the tail culminates at the end in a five-fingered hand. 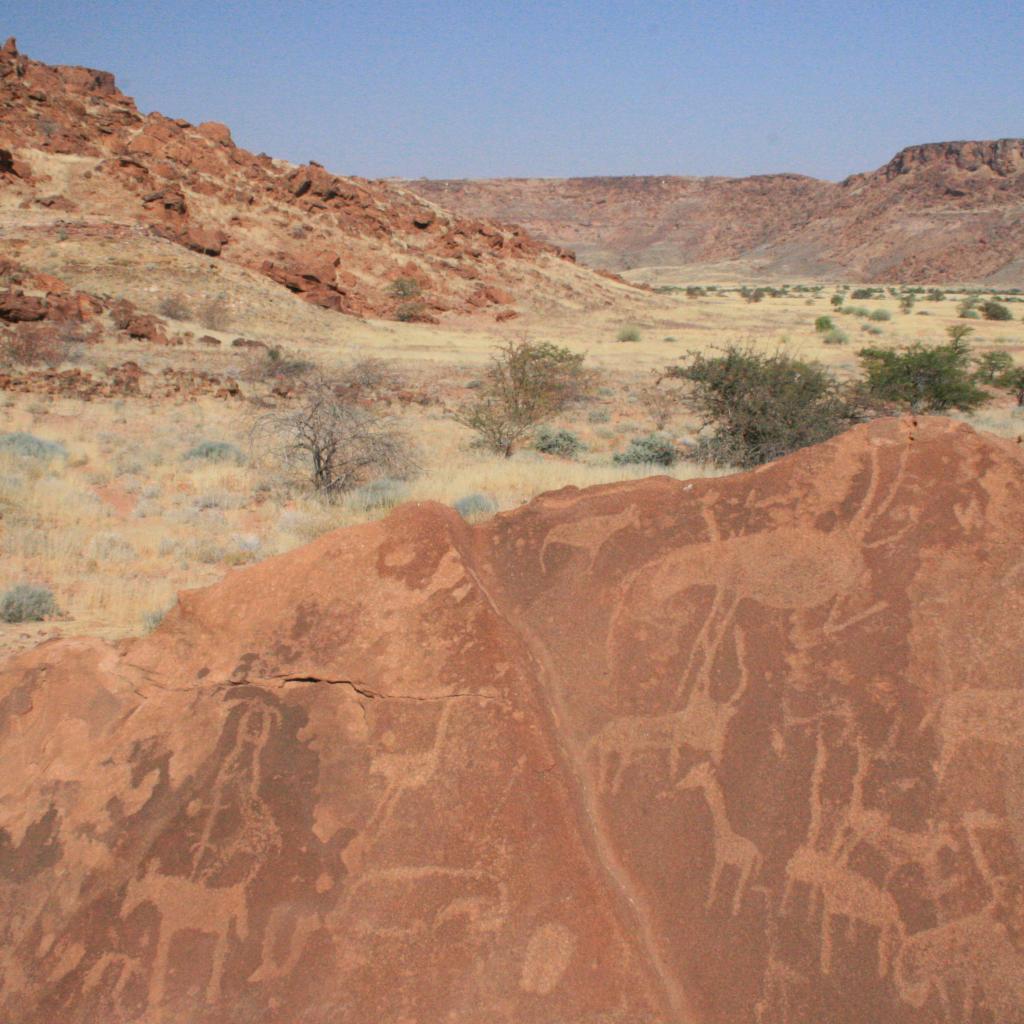 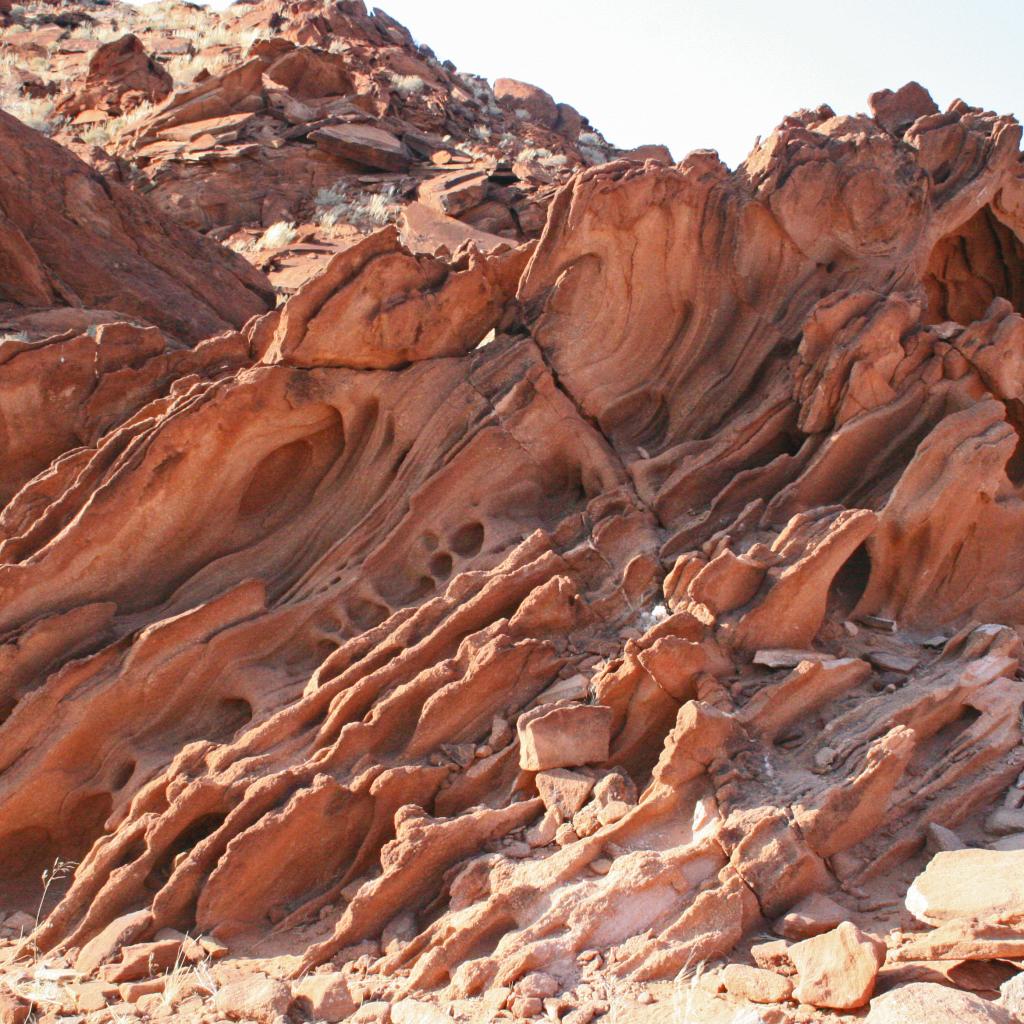 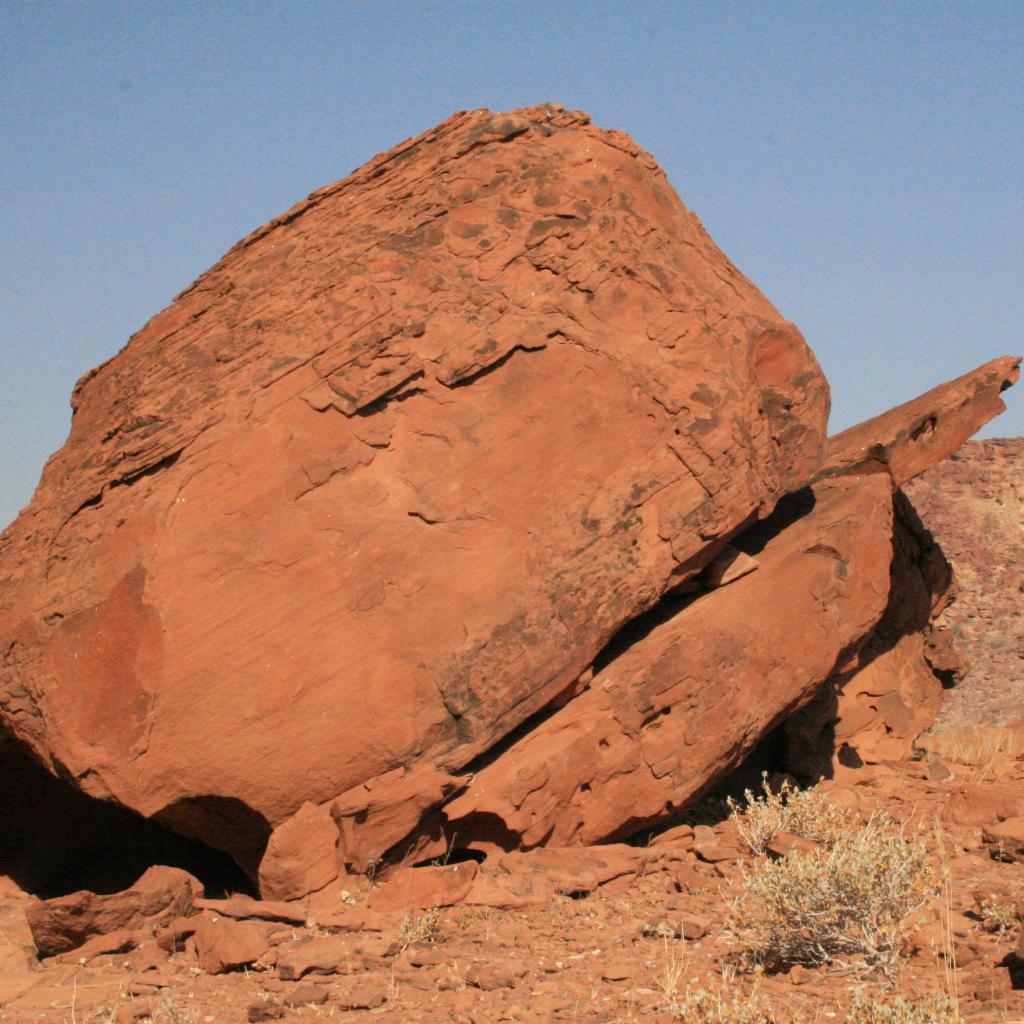