Etosha National Park: Giraffe - Photo Credits: Romina Facchi
The Etosha National Park has an area of 22,270 square kilometers and is one of the largest national parks in Africa.
About a quarter of the park surface is occupied by a salty depression that has an extension of approximately 5,000 square kilometers and constitutes the most significant element from a geological point of view; in ancient times, here was a lake fed by the Kunene river that, following the movement of earth plates, and the subsequent rise of the pan, has diverted its course to the West, heading towards the Atlantic Ocean.
The hyper-saline soil of the pan and of the surrounding area does not allow the majority of plant species to survive, the only species that can live in such a hostile environment are the halophytes plants such as the Sporobolus salsus, the Sporobolus spicatus, the Odyssea paucinervis and the Suaeda articulata.
The pan is usually dry, especially during the dry season, a period when the winds carrying its sand, rich in salt, to the West, enrich the soil with minerals; while, as a consequence to the rains, it partially fills with water, without ever exceeding 10 cm depth; this time of the year it is filled with various species of birds, especially flamingos and pelicans.
Moving away from the salty depression one meets a portion of grassy and shrub savannah with many acacia bushes.
Most of the park, away from the pan, is covered by forest and savannah and the most common tree, about 80% of the entire park, is the Mopane; the North-East instead is dominated by acacia trees and Terminalia, while the Tamboti characterizes the woods South of the sandy soil or sandveld.
The terrain of the Etosha National Park is mostly flat, while the areas South and West of the park are characterized by the presence of dolomitic hills, particularly between the Halali and the Dolomite Hill.
This is the only place in the park where you can spot the mountain zebra or Hartmann's zebra; also here are the Moringa ovalifolia, these oddly shaped trees, that vaguely resemble the baobabs, are the key element of this territory.
In the park there are 6 fields available to visitors and offering different types of accommodation.

The gates of Etosha National Park from North-East to South-West:

The Onkoshi, an exclusive lodge in a park area off-limits to non-guests of the lodge, is located directly on the edge of the pan and offers views and exclusive game drives.
The Namutoni, the first lodge that was opened in the park, is located inside of a German fort that is now a national museum, it offers different types of accommodation and a range of services available to all the visitors of the park.
Right in front of the Namutoni there is an illuminated pool that allows the nocturnal sightings and, in the surrounding area, there are numerous pools, natural and artificial, where, especially in the dry season, you can spot many animals.
Further South is the Halali, located halfway between the Okaukuejo and the Namutoni; this lodge also offers different services and types of accommodation and its pool for night observation is particularly famous for the high presence of leopards.
Near the Halali there are several paths and pools that allow the sighting of animals; here there are also the Makalani palms or Hyphaene ventricosa, whose fruits are also known as vegetable ivory.
The Okuakuejo is South near the Anderson Gate and in the past it was a German military outpost; it offers various services for the visitors and its pool, illuminated at night, is famous as one can often spot black rhinos and elephants, especially in the months from June to December.
Nearby there are several pools, natural and artificial, where to make good wildlife sightings.
Continuing West, the landscape changes dramatically, the white pan land gives way to reddish earth, here also there are the square and stubby dolomitic hills.
This area, until 2015, was off-limits to travelers who were not staying there, but now it is open to everybody; here are two lodges: the Olifantsrus Camp that only offers camping facilities and is the newest hotel around the park, its pool is much frequented by elephants, that give the name to the camp.
In the section to the West of the park, not far from the Galton Gate, positioned on top of a relief, it is the Dolomite Camp offering only accomodation in the lodge, while there are no camping facilities; in this area of the park there is the highest concentration of animals.

The gates of Etosha National Park: 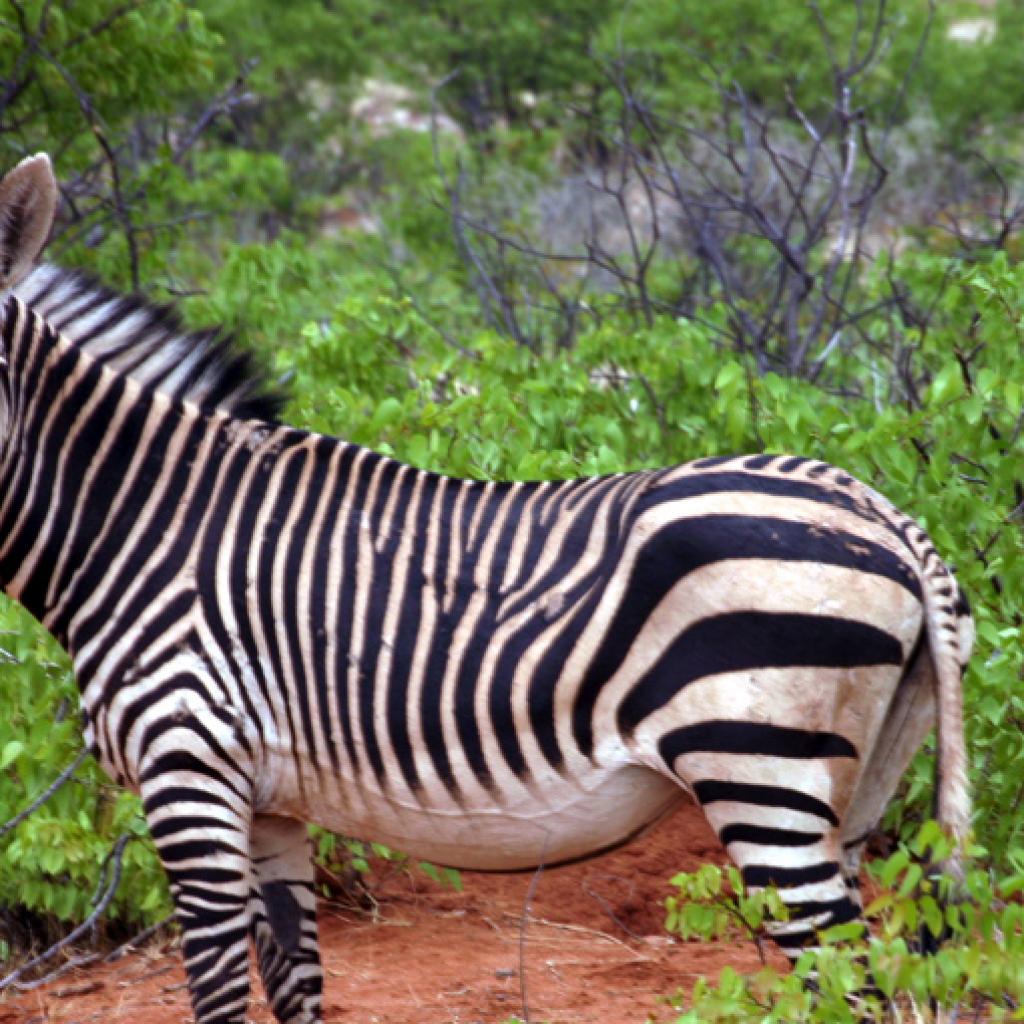 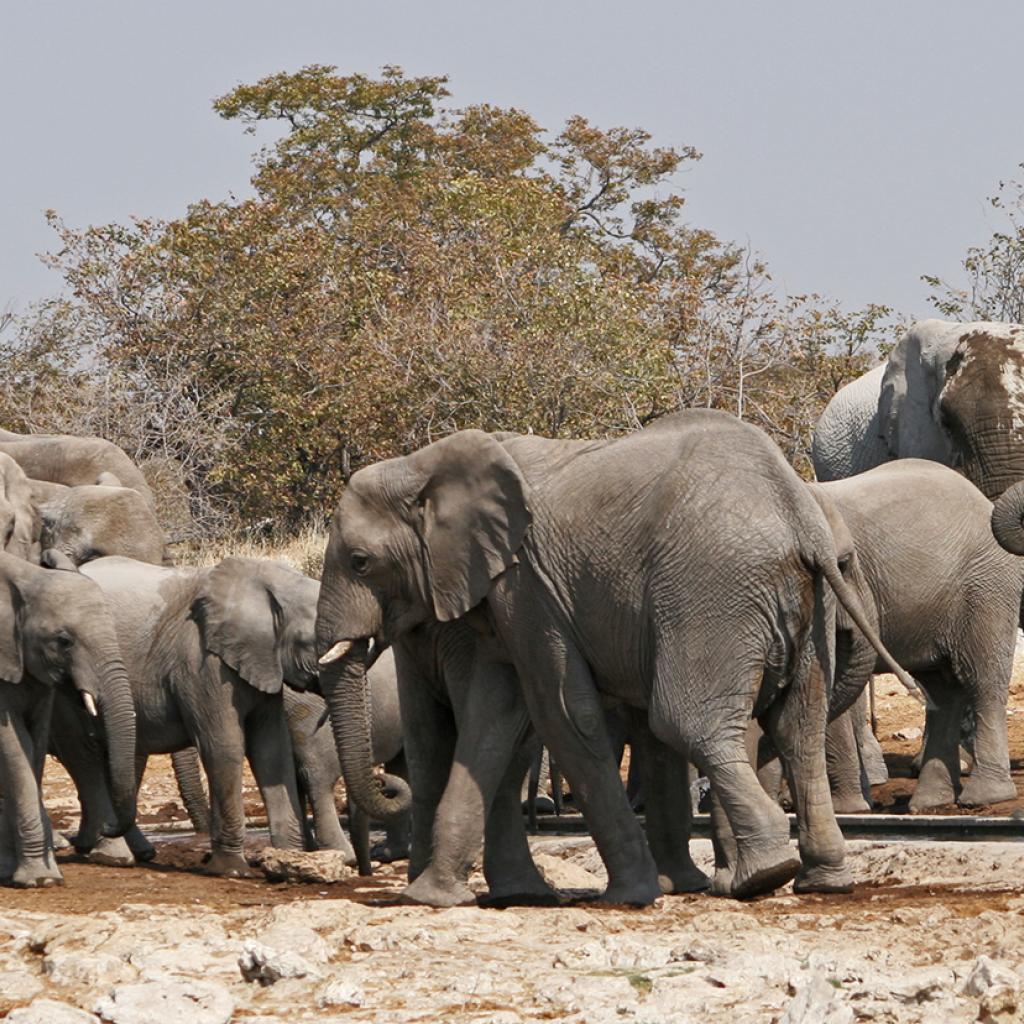 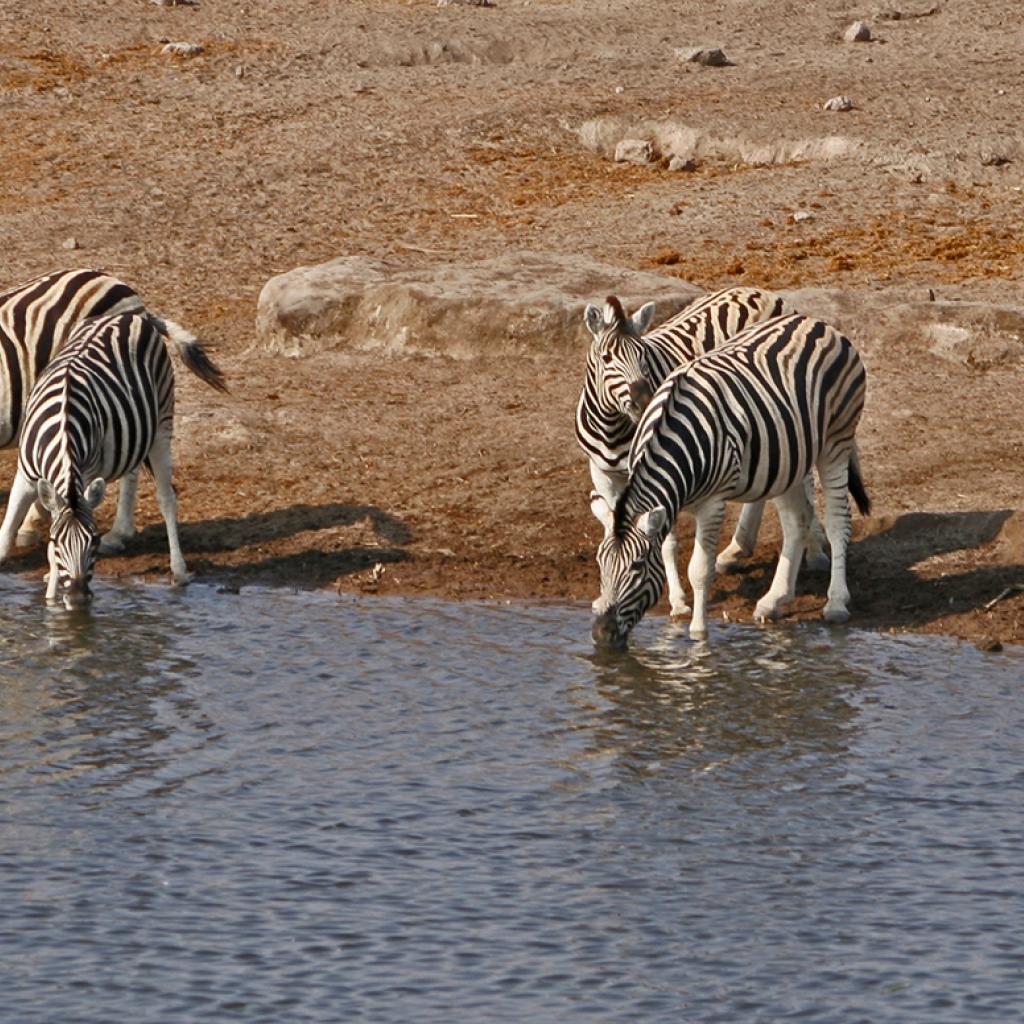 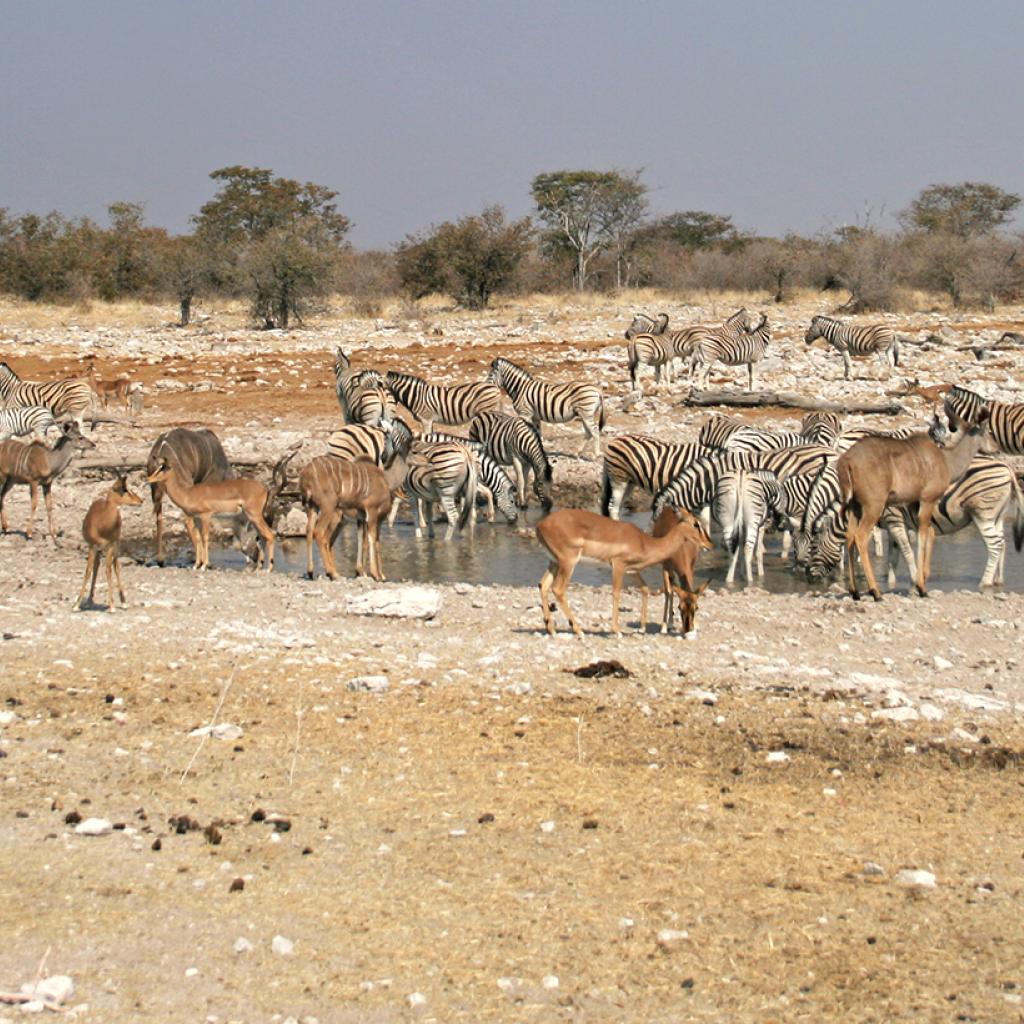 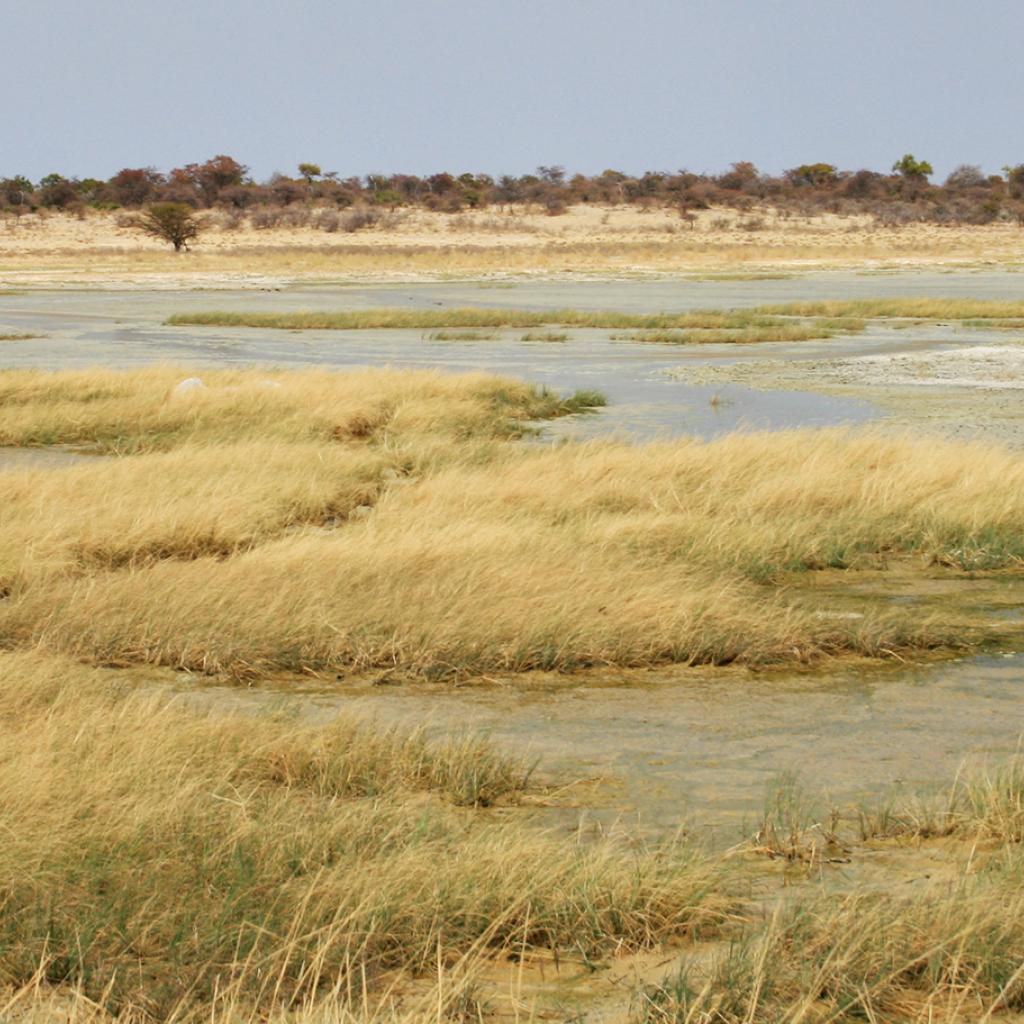