Samburu National Reserve: Ewaso Ngiro River - Photo Credits: Romina Facchi
The Samburu National Reserve is located in the Samburu District, in the Rift Valley province in Kenya; it is located North of the Equator, at an altitude ranging from 800 to 1,230 meters above sea level and it covers an area of 165 sq km; the small size, especially when compared to the Tsavo National Park and the Masai Mara National Reserve, makes it easy to visit the reserve, in its entire surface, in one or two days of safari.
Samburu is characterized by a desert and semi-desert region with a dry and warm climate; the Southern border of the reserve is delimited by th Ewaso Ngiro, or Ewaso Nyiro, that is the only permanent source of water in this protected area, even during the dry season; from this river depends the survival of all the animals in the reserve.
The river separates it from the Buffalo Springs National Reserve, with which, together with the Shaba National Reserve is part of the Samburu Laikipia Ecosystem; the majority of visitors come to the Samburu National Reserve, where there are more facilities and where the sighting of animals is more satisfying.
What is unique about a safari in this reserve is that here, as well as have the presence of many species, you can spot some animals that are not found in other parks and reserves in Kenya, such as the Grevy zebra, the reticulated giraffe and the Somali ostrich that together with the gerenuk and the fringed-eared oryx, or East African oryx, are the Samburu Special 5.
In the reserve there are also many other species of animals, mammals, birds and reptiles: lions, leopards, cheetahs, wild dogs, several species of antelopes, gazelles, warthogs, jackals, giraffes, hippos, crocodiles and over 450 species of birds, but especially a large number of elephants; it is estimated that more than 900 specimens live here and it is very common to spot them as they descend to the river to drink and cool off.
The reserve is one of the places, along with the Amboseli National Park, where there are researchers who study the behavior and the conservation status of species of these wonderful animals, here is Save the Elephants.
There are also other research projects: the Reticulated Giraffe Research Project that studies the reticulated giraffe of which there are only a few thousands of specimens in the wild; the Grevy Zebra, protecting the wonderful endangered Grevy zebra from extinction and the Ewaso Lions that studies and protects the lions.
The reserve owes its name to the Samburu people, nomadic herders who live in these lands ever since they moved here, migrating from present South Sudan; usually these people have a lot of respect for nature and for wild animals with whom they live in perfect harmony.
The Samburu contribute to the protection and conservation of this reserve on one hand not killing wild animals for food and on the other watching, along with the rangers, the reserve to monitor both the wild animals and the intruders.
Despite the small size the reserve encloses different habitats: riverine forest, palm and acacia trees forest, woody savanna, shrub savanna and open savannah.
This is one of the two places, the other is the Meru National Park, where George and Joy Adamson grew the lioness Elsa, a lion cub, who was found motherless and that, when she grew up, was successfully reintroduced in the wild; the lioness Elsa became famous thanks to the book "Born Free" written by Joy Adamson who subsequently became also a movie.
The Samburu National Reserve was also the place where a lioness was observed, for 6 times, adopting a puppy of fringed ears oryx, or East Africa Oryx, as if it was her puppy; abnormal behavior and unusual for a cat, she became source of discussion for the scholars around the world.
A sign with a painting at the main entrance of the reserve reminds visitors this exceptional event.
In addition to classic off-road safaris, here you can make walking and mountain biking safaris; finally, you can learn more about the Samburu people who are happy to welcome visitors to their villages who want to discover more of their culture; the reserve is also a must-see for bird lovers.
The best time to visit the reserve is in the dry season, ie from June to October and from December to March.
The Samburu National Reserve is located North of Nairobi which is 350 km far away; it can be reached with a 4 or 5 hours drive along the road that leads from Nairobi to Isiolo and from here proceeding to the park, where you enter through the Archer Gate, the main entrance; or you can take a short 45 minutes flight from the capital and land in the reserve airstrip. 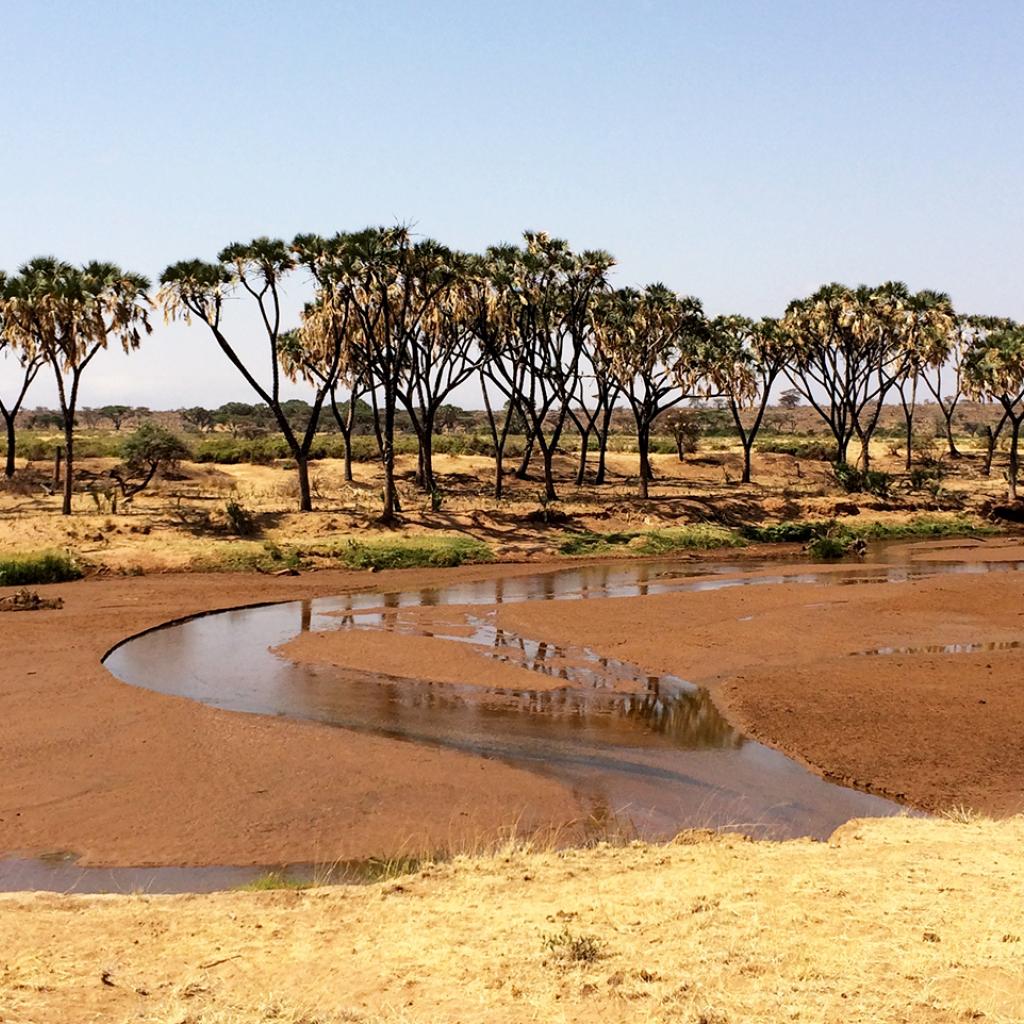 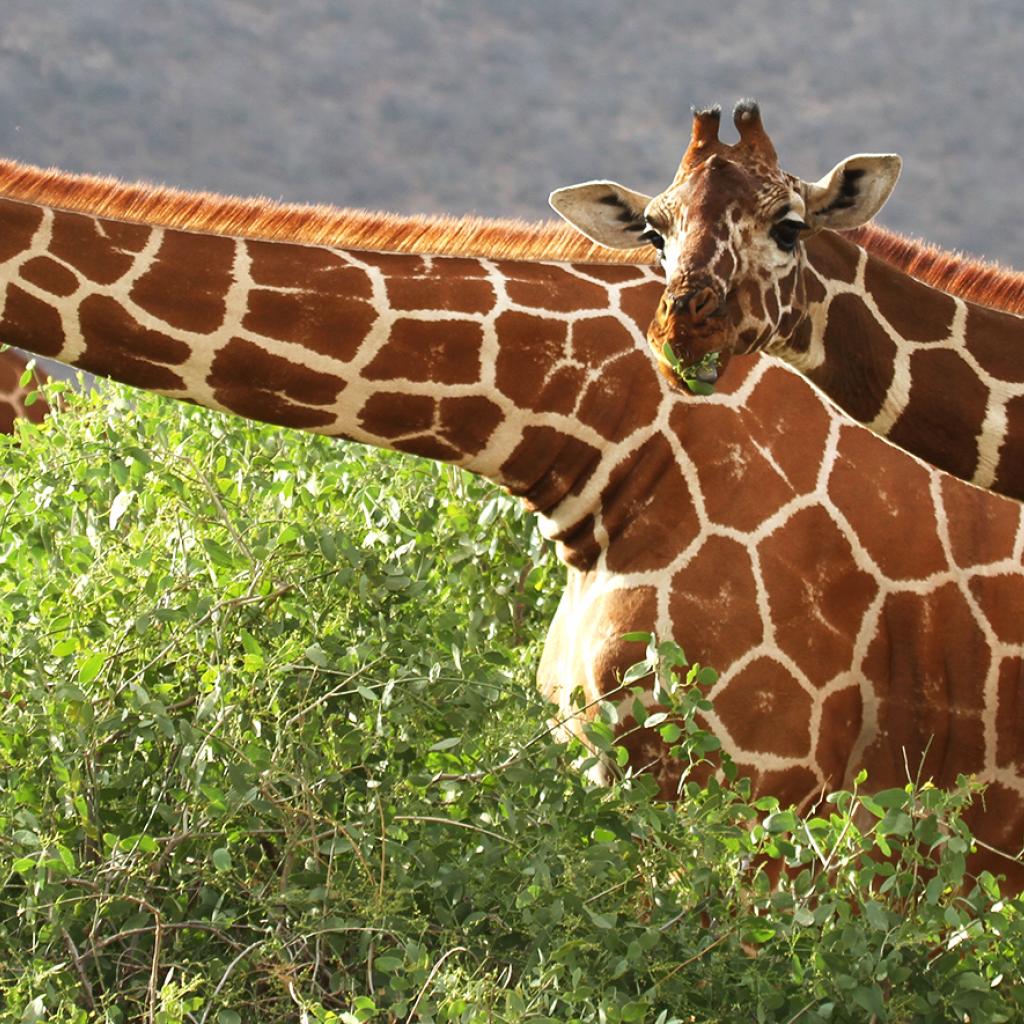 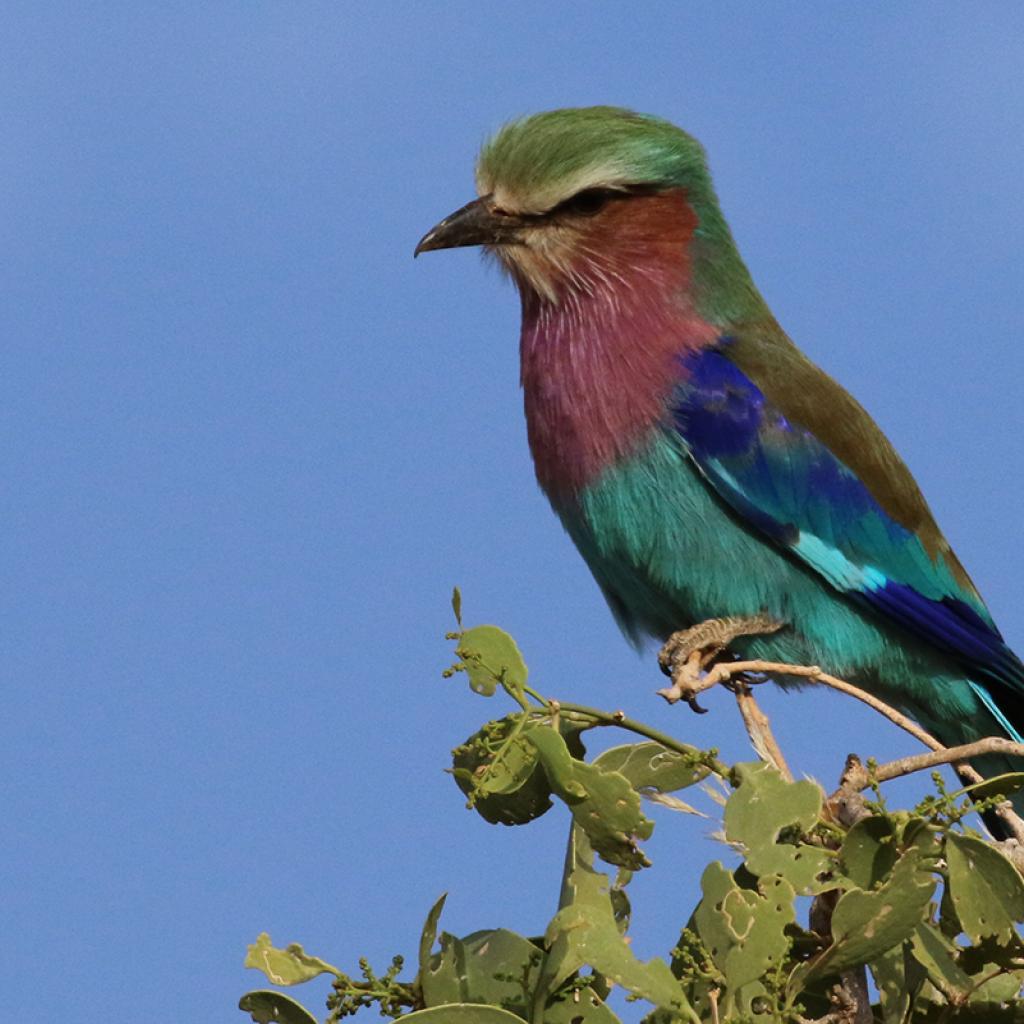 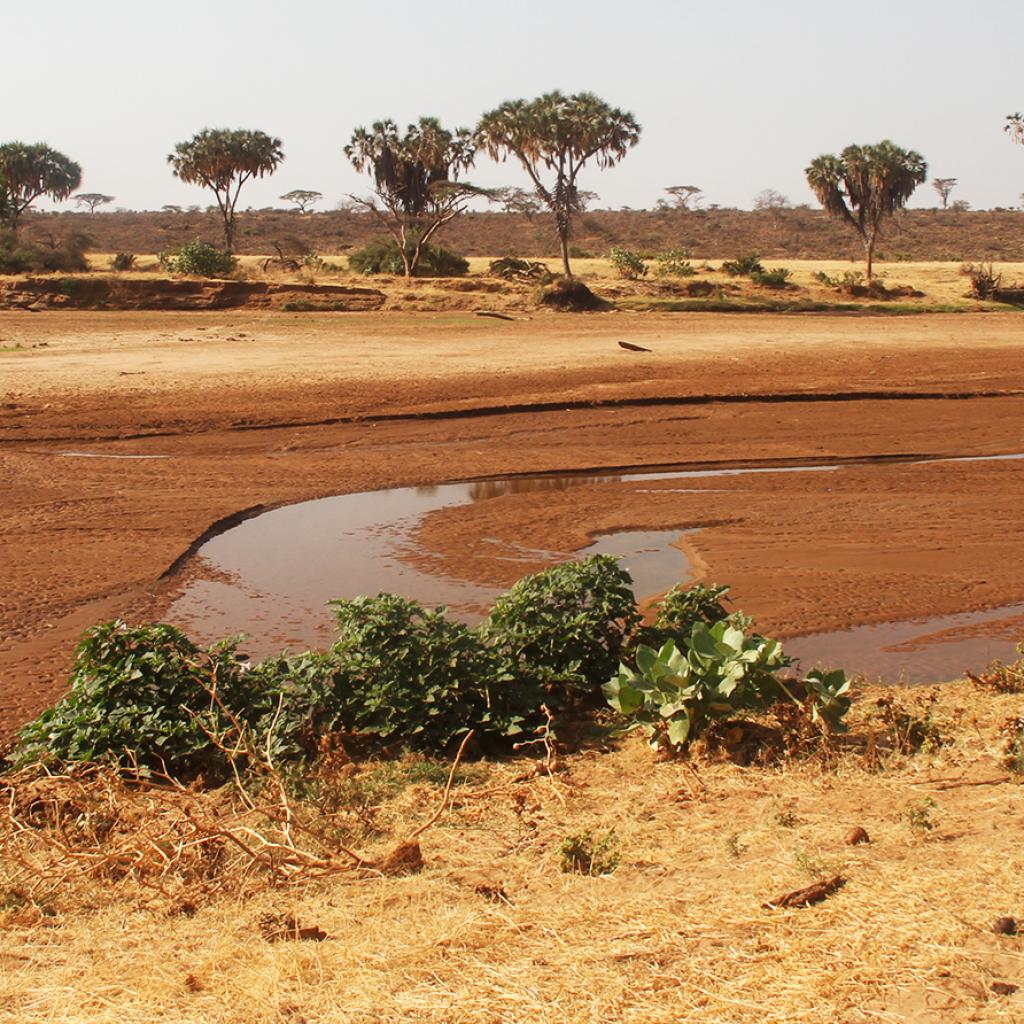 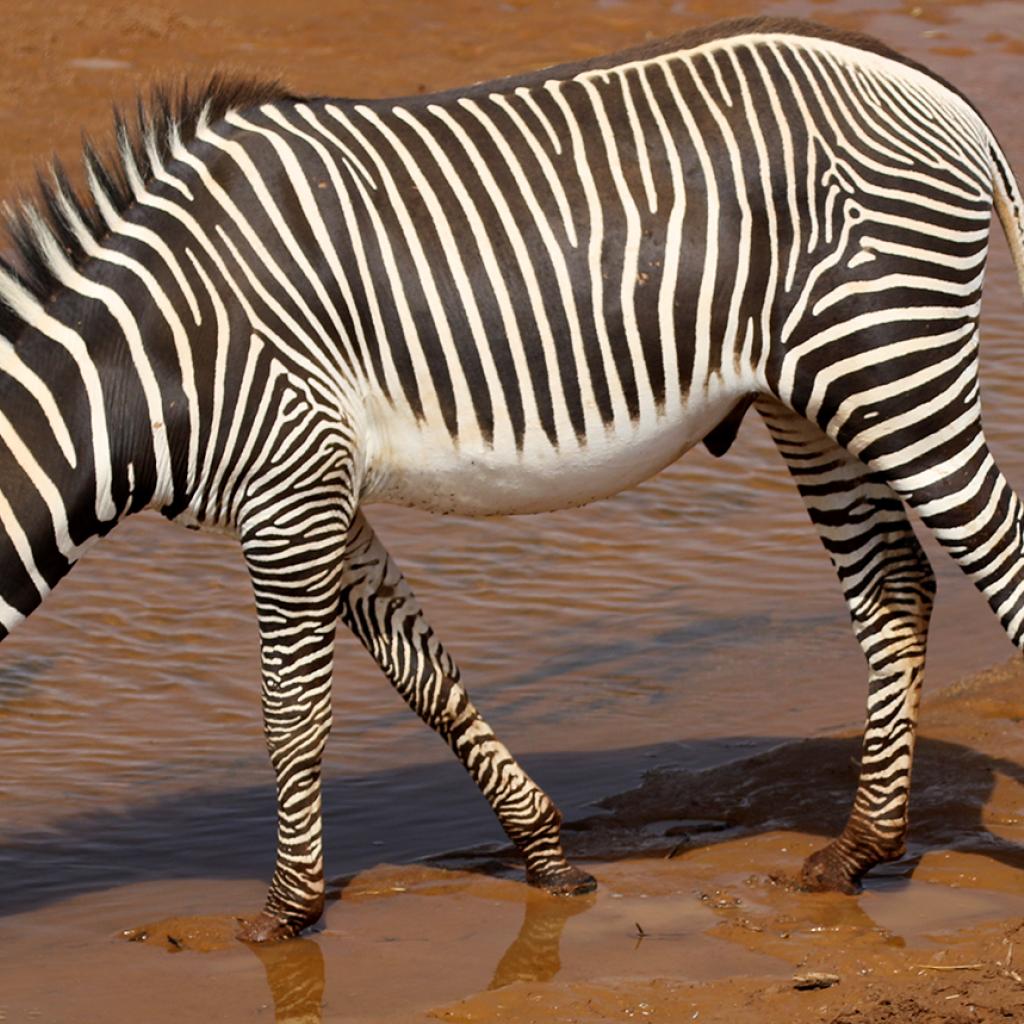 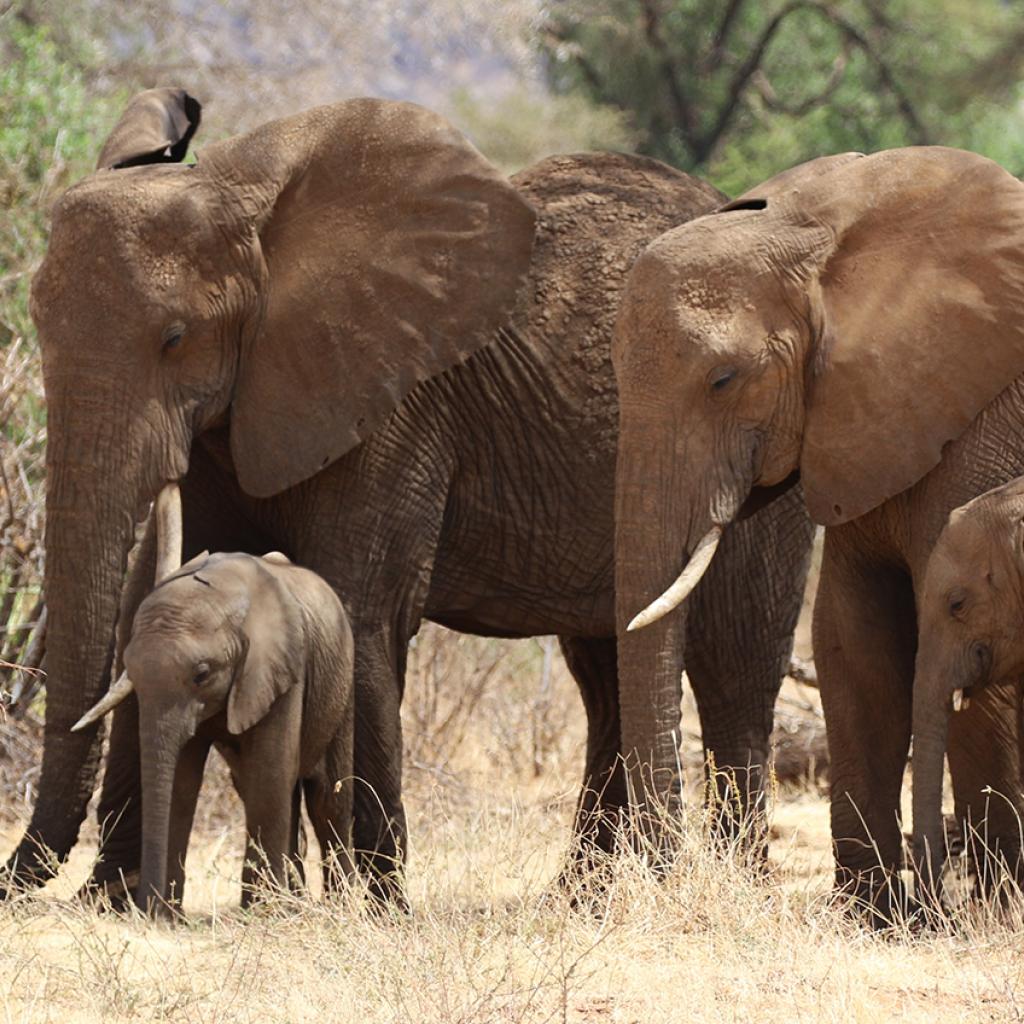