The Hambukushu or Bukushu are of Bantu origins, its people moved South from Equatorial Africa and settled in Botswana, initially in the area of ​​the present Chobe National Park and then in the Okavango Delta area.

The delta represented the ideal place to settle, due to its deeper waters and periodic floods, being the Hambukushu a population of fishermen and farmers.

The waters provided good fishing, while the southernmost areas, less affected by seasonal floods, were perfect for farming.

Today they live mainly in Ngamiland, the Okavango Delta, in Botswana and in part in Northern Namibia and in the South of Angola; small groups of Hambukushu are also present in South-Western Zambia.

The Hambukushu practice livelihood farming based on corn, pumpkin, watermelon and sugar cane cultivation; they also practice breeding, but fishing is their main occupation.

To move along the canals and rivers the Hambukushu use the mokoro a typical canoe of the delta obtained from a tree trunk, usually of ebony; but, unlike other populations, they usually ride while sitting inside the mokoro, while usually this type of boat is carried by standing on the back end of the canoe.

Thanks to their strong water connection, the Hambukushu are considered the "rain men" by neighboring ethnic groups who consider rain rites practiced by them responsible for the delta flood.

The Hambukushu women are famous for making wicker baskets, the baskets, very elaborate, are made of palm fiber and are then dyed with colors extracted from the tree roots or barks, so they get different shades of brown, orange and cream.

The waters provided good fishing, while the Southernmost areas, less affected by seasonal floods, were perfect for farming.

The great variety of shapes and sizes of the baskets reflects the many uses for which they are produced; some huge baskets are used to store grains, others, much smaller but of very fine fabric, serve to contain locally produced beer.

Women also make baskets that have the shape of large cones, these are used to fish, trapping the fishes inside them.

Social organization is simple, usually there is a village leader who takes decisions on the common interest and, in doing so, is assisted by other members of the family.

Contact with Europeans took place only in the early 1900 with the German missionaries who came to these lands; then, towards the middle of 1900, some Hambukushu were brought to South Africa to work in the mines.

Their language is characterized by click consonants, called Mbukushu or Thimbukushu; it is a Bantu language spoken by 45,000 people along the Okavango River in Namibia, where it is also a national language, in Botswana, Angola and Zambia.

The Hambukushu believe in a single deity that created man and livestock and dropped them down to earth through the hills of Tsodilo, a place considered as sacred.

Other beliefs are related to the spirits of the dead and to a big monster with the semblance of a snake living in the waters of the rivers.

In recent times, in 1969, the civil war in Angola forced many Hambukushu to escape from the war regions and refuge in Botswana, here they were welcomed and the Etsha villages were created, found along the course of the Okavango River and each has a clan.

The UN helped to save the refugees who arrived in Botswana without anything and dead of hunger, food and education programs on how to cultivate the land and about the best crops to be implemented were carried on. 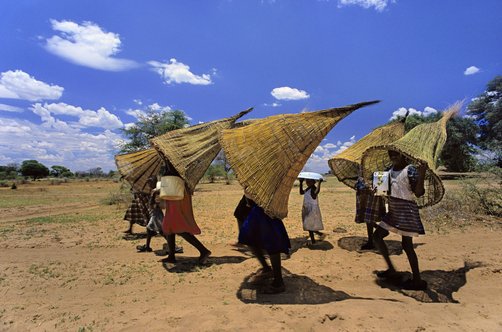