The Mursi, one of Ethiopia's most iconic tribes, still have a strong tribal identity and a respect for tradition and ancient rituals that are still practiced today.

Young people, both girls and boys, start very early to train to fight in their respective rituals that are a tool, on the one hand, to teach them the courage and the importance of sociability, on the other, to allow boys to demonstrate their skills in public that will enable them to achieve their life goals, such as adulthood, marriage and children.

The Donga ritual in the tribal culture of the Mursi

The Donga is a fight that over the centuries has become a sort of martial art and an essential tribal tradition in the life of the Mursi, in fact the Mursi children are taught this art of fighting from an early age.

The Donga is a duel ceremony that sees two challengers belonging to the same age group as protagonists, usually the duelists are celibate men who compete to test their skill, their agility and their strength and to attract girls’ attention.

The two men compete to a duel using a long stick as a weapon, this stick is called donga, exactly like the ritual, it is 2 meters long and weighs between 700 grams and 800 grams.

The stick is held in different ways by the two fighters based on the action to be taken: when one wants to hit the opponent, the donga is held at the base with both hands, with the left hand over the right; when one wants to defend himself from an opponent's blow, the right hand remains at the base of the donga, while the left hand is placed in the middle of the stick.

The two challengers wear a sort of armor since the fight, even if of short duration, usually lasts from 20 to 40 seconds, is very violent; the armor, the tumoga, has a protective but also decorative function.

The tumoga provides protection for the hands, anklets made with animal skin, protections for the elbows and knees, made by weaving natural fibers obtained from the sisal plant, some animal skins to protect the body and finally a sort of leather skirt.

The head of the two challengers is protected by a sort of protective helmet, made by overlapping several layers of fabric.

Before starting the duel, the two challengers sing songs and war cries while jumping along the perimeter of the battlefield, thus entering a sort of competitive trance.

The elders of the village attend the duel and play the role of referees of the fight, they check that the few rules are respected and decree the winner of the fight.

Physical strength is not enough to win the fight, but it is important to foresee and prevent the opponent's blows that can also be very violent.

The one who manages to land the opponent or the one whose opponent retires due to injury or other reasons wins the duel.

If the victory occurs by knocking down the opponent, the winner will be carried in triumph on the shoulders of his peers; later he will be surrounded by unmarried girls belonging to his mother's clan who spread goat skins on the ground to seat the winner who is sheltered from the sun by the layers of cotton worn until recently, that are spread by the girls to give him shade.

The Donga ritual lasts several days, it is carefully prepared months in advance and usually celebrated in a period of the year when there is great availability of food, in this way the duelists can have perfect physical shape.

This ceremony is considered very important and is taken seriously by all the participants; its importance is also understood from the fact that it is defined kaman, that means war in the Mursi language.

The Ula ritual in the tribal culture of the Mursi

The Ula ritual is a fight in which the Mursi women compete to show all their strength and ability, in practice it is the female equivalent of the Donga ritual, in fact it is sometimes called donga a dholuiny, that means the donga of the girls.

The girls fight using iron bracelets that are called ula, like the fight.

The ula bracelets are heavy and rigid, in practice they are pieces of iron, usually cylindrical, that are shaped so as to adhere to the wrist of the girls, leaving an opening to be able to wear or take them off, but, contrary to the usual C-shape of this type of bracelets, the top is in the shape of two small arches; these are used to deliver blows in the direction of the opponent.

The ula bracelets symbolize the strength of the girl who wears them, but there are other factors that determine the wearing of these bracelets, such as the wealth of the girl's family.

Only young single women train and compete in this duel, that usually occurs after the Donga; the battle of the bracelets is considered a fundamental step in the education of every young girl and the Ula represents what will be her skills as a wife and mother.

The audience attending the Ula ritual is made up almost exclusively of men.

One of the two rivals wins when the opponent is hit on the mouth, side or other parts of the body; on this precise moment the referee declares the confrontation over and acclaims the winner.

To avoid serious injuries, the girls who have their lips cut, to insert the lip plate, create a sort of protection, using the leaves, to ensure that it does not tear after a received blow; a girl with lacerations or scars is viewed negatively by the community, unlike what happens to men, whose scars represent their strength, their courage and also the fact that they have taken part in many duels. 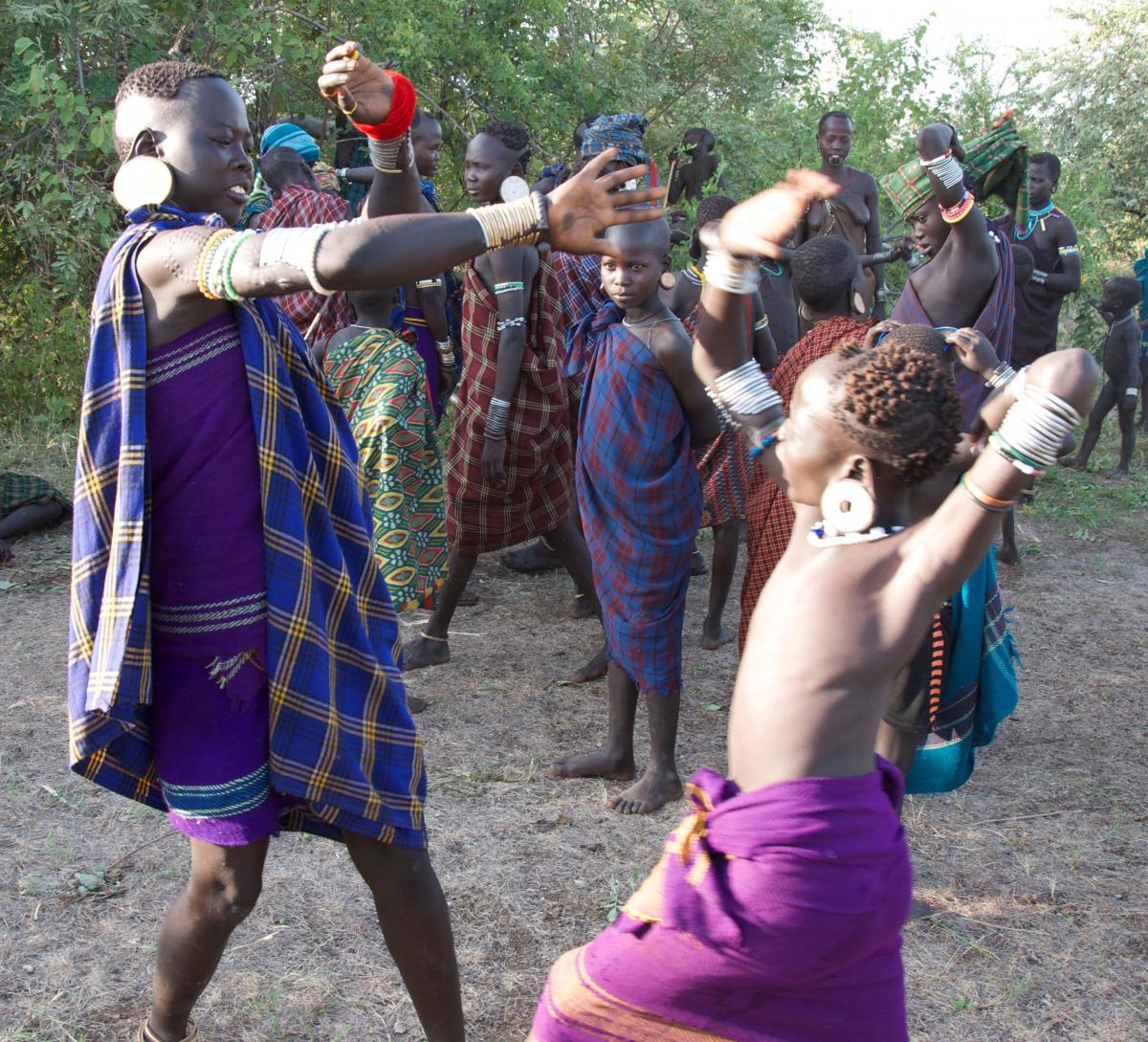