The Mursi are an ethnic group made up of about 10,000 individuals, but the numbers are estimated, living in the lower Omo Valley, in South-Western Ethiopia, about a hundred kilometers North of the border with Kenya; their territory, located in the Mago National Park, is bounded by the presence of three rivers: the Omo River, the Mago River and the Mara River.

The history of the Mursi is marked by a long series of migrations, undertaken in an attempt to find a suitable place for both cultivation and livestock breeding; in reality we have certain information about their movements only for about two centuries, while as regards the previous period, we can only rely on the stories handed down orally.

The subsistence of the Mursi is based on two fundamental elements: agriculture and livestock, the first is mainly characterized by sorghum, but also corn, beans and chickpeas, while livestock is an important source of subsistence and determines the wealth of a family.

The Mursi practice agriculture at two different times of the year and in different places:

• in the months of September and February they cultivate along the banks of the Omo River and the Mago River, in this period the soil is fertile thanks to the presence of the silt deposited on the banks during the annual floods, that occurred during the rainy season;

• in the months between March and April, during the rainy season, they sow on the land they have prepared East of the Omo River.

However, both cultivation periods always have an uncertain outcome due to the unpredictability of rainfall; livestock therefore represents the safest and most certain source for the well-being of a family and the entire tribe.

Livestock also plays a central role during rituals, during which animals are often sacrificed and then distributed to families to be consumed; some rituals, on the other hand, concern livestock.

The Mursi believe in the existence of a superior force called Tumwi, this divinity lives in the sky and manifests itself through some elements related to the sky, such as the rainbow or a bird; the bird in particular represents the mediator between the earthly and the otherworldly world.

The priest, or Kômoru, as well as being the most important figure for the Mursi and holding the role of the main religious office, plays the central role of mediator between the community and the creator god.

Priests perform rituals with the aim of protecting the community, livestock and the territory in general, keeping away any threats such as drought, disease, raids and restoring the social and natural order.

Priests are a very important and respected figure by the community and for this reason those who assume the role of Kômoru can never leave their territory.

In addition to the figure of the priest, the Nani are esteemed for their particular manual skills: they are able to shape the horns of cattle and clean open wounds thanks to the use of certain herbs and tools; in practice they are a kind of healing doctors.

Finally, there are the Ngerre, women healers who deal with the daily treatment of the diseases of the community, through the laying on of hands they push the disease out of the patient's body.

Another very important figure for the Mursi, who however has a more political role than anything else, is the Jabala; he is a skilled speaker who has a primary role in debates involving the community.

The Mursi are divided into clans, there are 18 of them in the lower Omo Valley, and between these clans there is a mutual esteem and a sense of brotherhood.

The clans are divided into villages; the villages of the Mursi are rather simple and are composed of a series of low dome-shaped huts, made by intertwining the branches that are then covered with straw.

Another significant aspect of the social organization of the Mursi is the age group system: this system and the related passing ceremonies are important points of reference in people's lives.

All men are classified according to two main categories: boys and adults while the wife assumes the age group of her husband; these two categories are further subdivided into age groups.

The Mursi adopt a patrilineal lineage that is founded exclusively on the bonds between individuals of the male sex, the patrilinearity therefore involves the passage from father to son of properties, offices and titles.

The most obvious of the body modifications is the use of the lip plate that is inserted into the lower lip of girls preparing for marriage; similar plates are also inserted into the earlobes while scarifications are made on the arms, shoulders, torso and back.

In addition to body modification practices, the Mursi are skilled body painting artists, covering their face and body with clay, creating sinuous movements, geometric lines and references to nature; the various types of clay are recognized as having an important healing power therefore it is used in healing rituals.

Accessories are also important and are worn by both men and women, bracelets and anklets are worn daily and even the inevitable Kalashnikov has become an indispensable accessory for Mursi men. 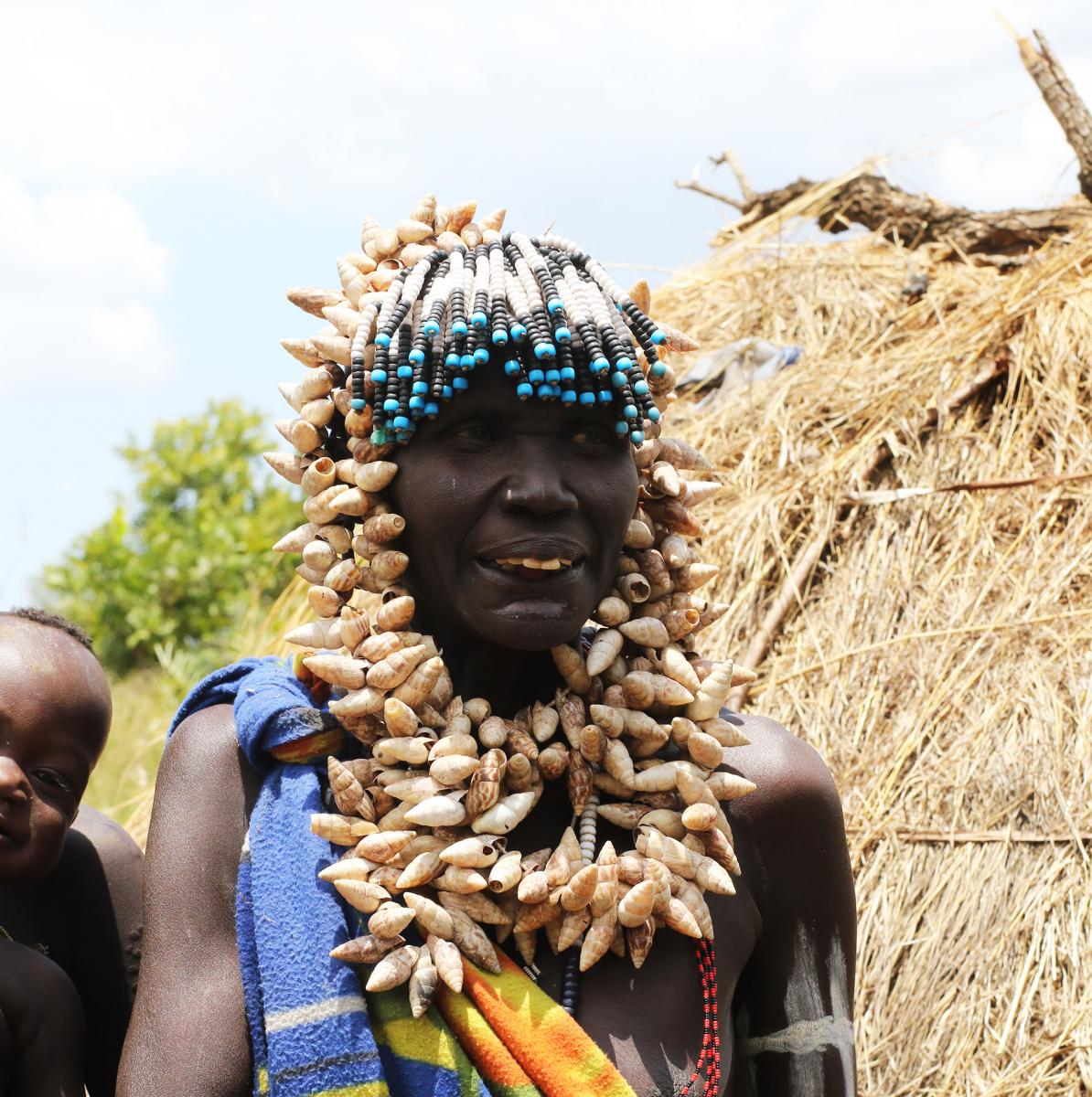 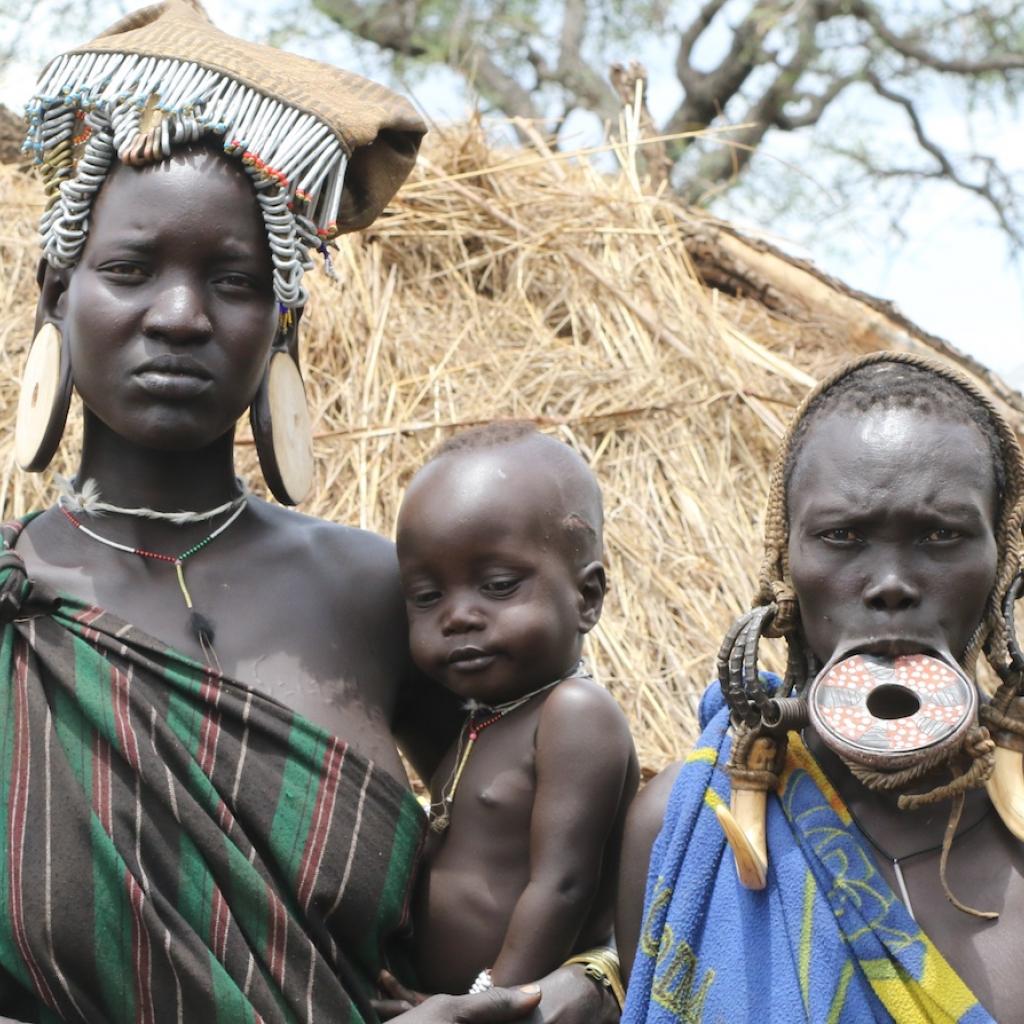 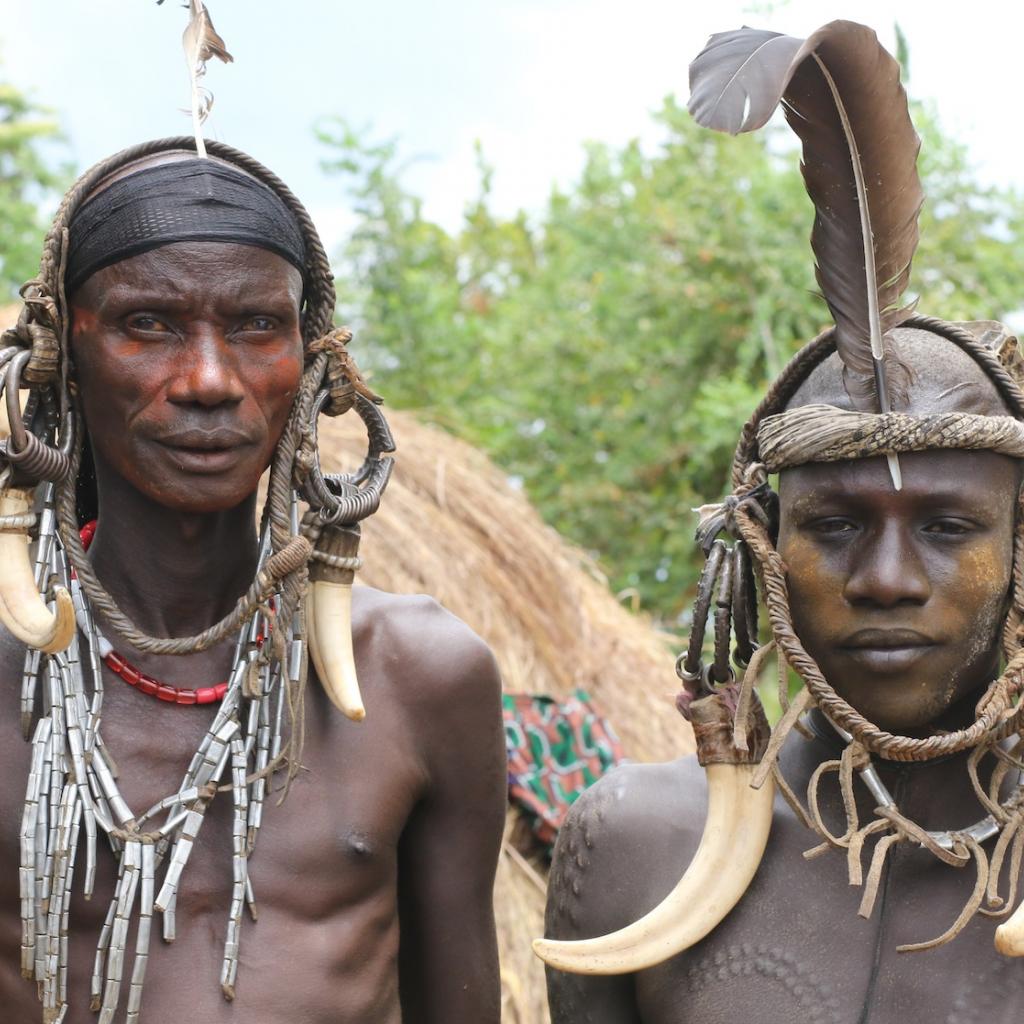 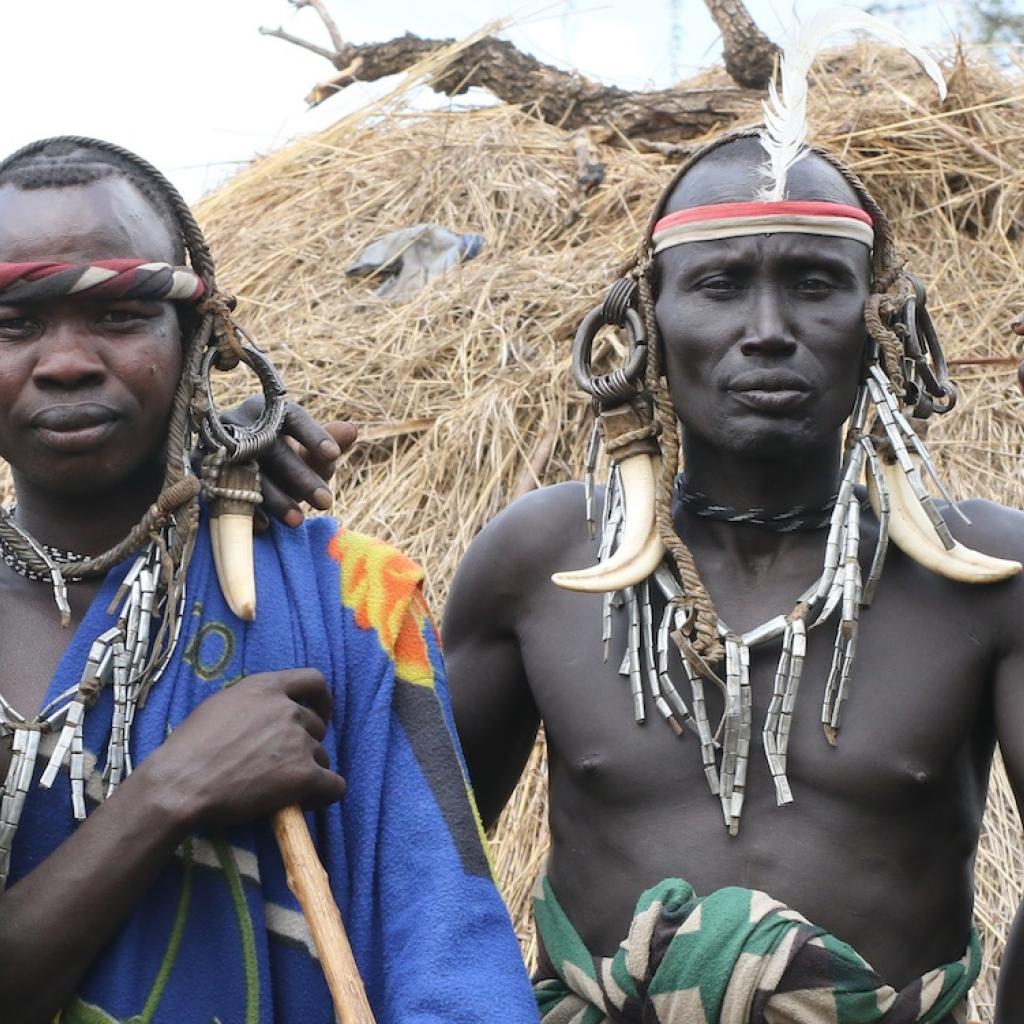 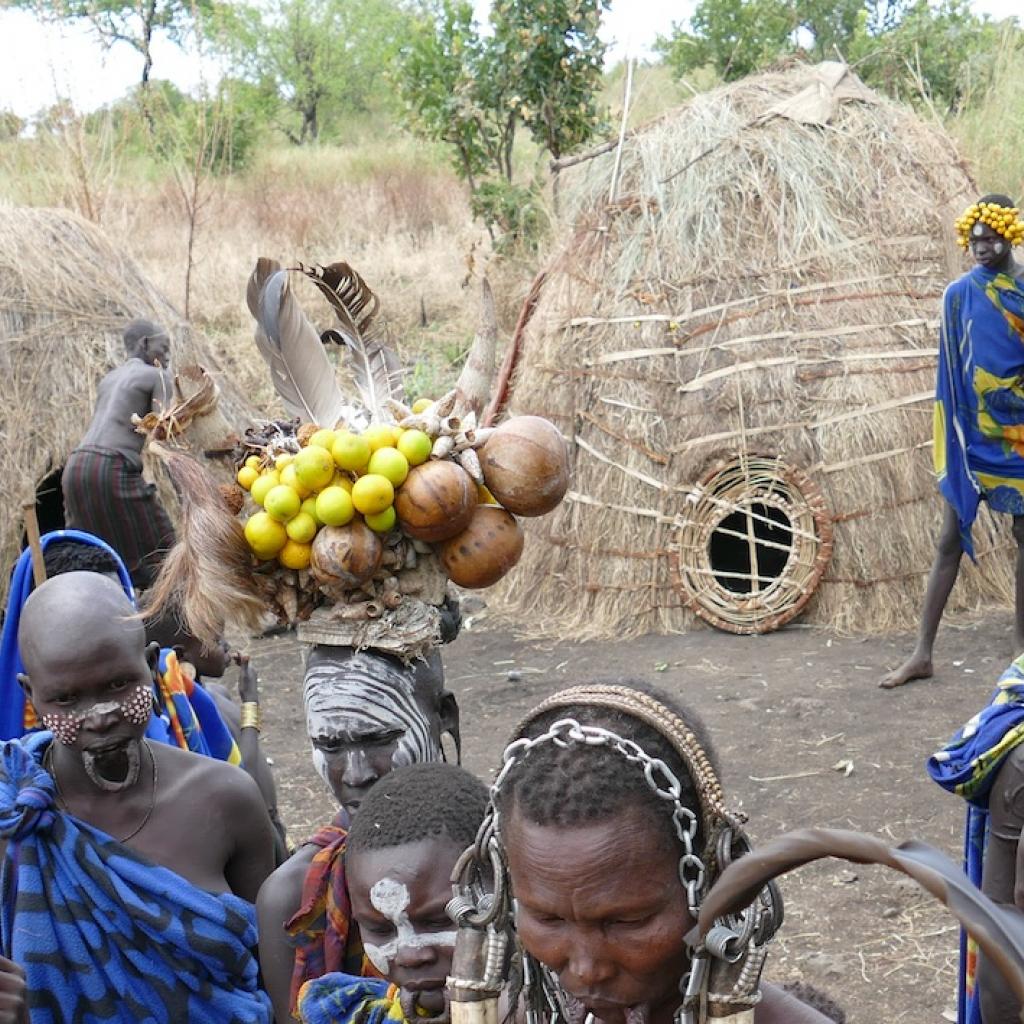 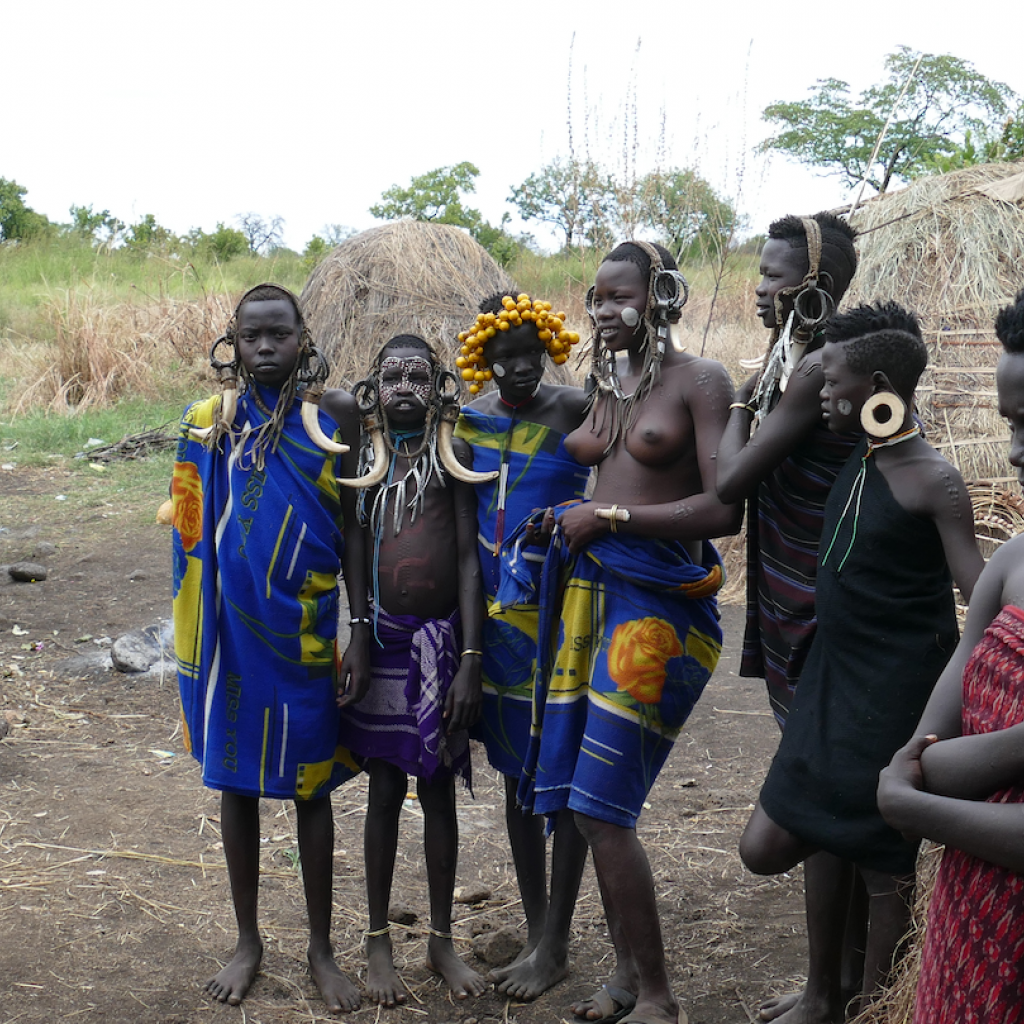 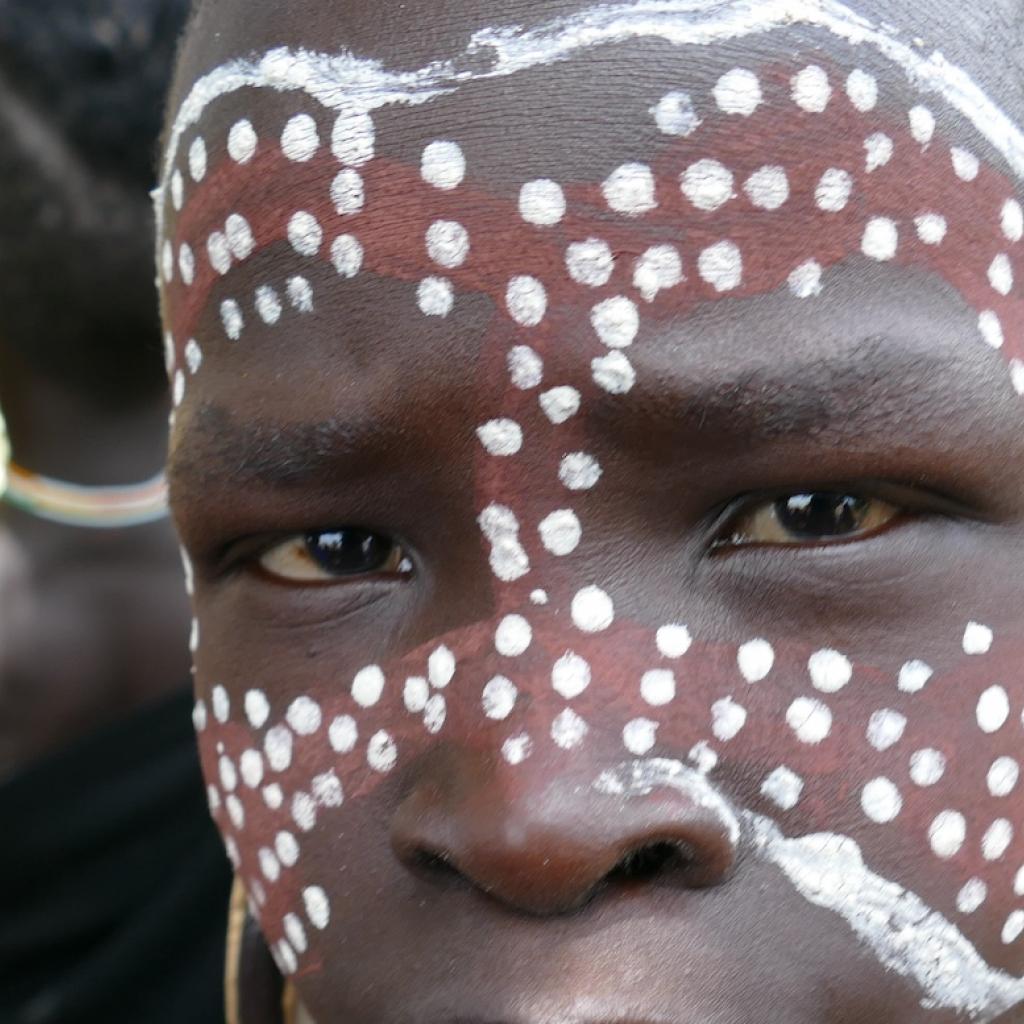 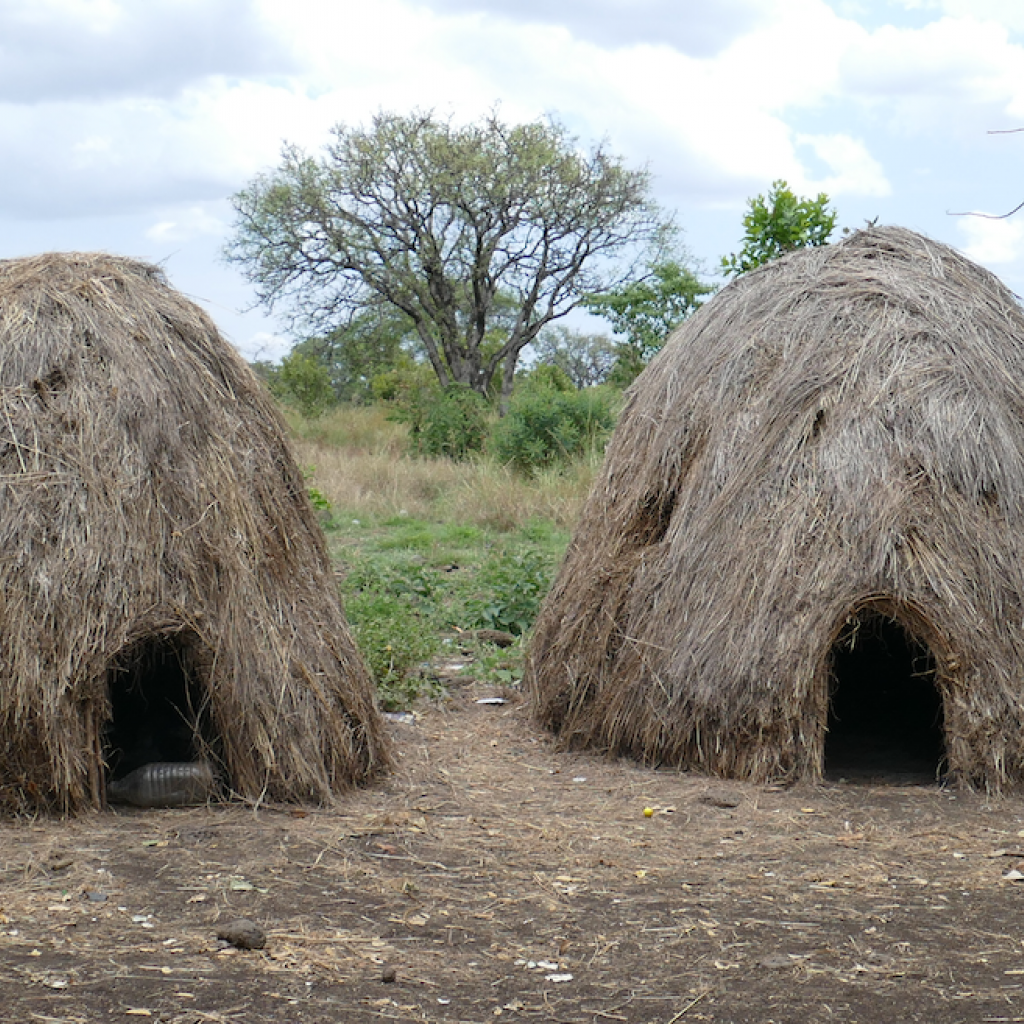