The Mursi are a semi-nomadic population who live in the Omo Valley in Ethiopia; the information on their history and their origins is very fragmented as, for some time, they have lived in a sort of isolation, due to the fact of living in remote places; moreover the Mursi, like other ethnic groups in the area, have no written but oral tradition.

The oral tradition of the Mursi, however, is rich in stories relating to the episodes of their history, even if obviously these events have been fictionalized and therefore should not be taken literally; these stories are however important since they give us some evidence of the past of this tribe even if they still need to be reinterpreted.

One of the most important stories concerns the discovery by the Mursi of the Omo River and the following migration undertaken to reach its banks.

In this story it is said that in the past the Mursi lived at Dirka and brought the cattle to drink from a nearby spring; every day, while all the other cattle were drinking, two bulls disappeared and reappeared at the end of the day.

The story ends with the discovery of the Omo River, the place where the two bulls went every day; the Mursi then decided to migrate to settle at this new source of water, but to get there, they had to make a journey that, it is said, would not have been possible without the help of magic.

This story and many others tell us about the constant need of the Mursi to find water and pastures for their livestock and, in periods of drought, they were forced several times to move in search of better places for the survival of the cattle and the tribe itself.

The same Mursi, when they talk about their movements, define them in search of a cool place, an expression that is to be interpreted as looking for a place with the best conditions for survival.

Climate and environmental changes have directly influenced the migrations of the Mursi, as well as those of the other tribes of the Omo Valley.

The Mursi decided to settle on the Eastern bank of the Omo River as the land was more suitable for livestock, but when they reached these places they found the Kwegu, a group of hunters, fishermen and farmers who taught the Mursi how to farm and, thanks to this, the Mursi let them live peacefully in their territory.

In the same areas there were also the Bodi who instead were mainly breeders, unlike the Bodi of the highlands who are instead farmers; the Bodi and their cattle were attacked by the Mursi and therefore were forced to migrate North, beyond the Mara River.

Historians think that the Mursi reached the Eastern bank of the Omo River about 200 years ago, but it is difficult to be sure for lack of reliable evidence; thereafter the Mursi raised their cattle and cultivated along the river.

What is certain is that in 1890 the Mursi were already in this territory, from this moment on it was possible to reconstruct their movements with greater reliability.

At the end of the nineteenth century there was an epidemic of bovine plague that killed many heads of cattle and caused a severe famine, known by the name roboga; the Mursi managed to survive thanks to agriculture, hunting and fishing.

In 1896, while the Mursi were facing this famine, the explorer Vittorio Bottego arrived in these lands.

Bottego noted that the Mursi had few livestock, while instead they practiced fishing, agriculture and hunting and therefore referred to them as expert elephant hunters, but in reality elephant hunting with poisoned arrows was a practice of the Kwegu who also used to collect pachyderm tails as a trophy.

This area of ​​current Ethiopia was formally annexed to the empire of Ethiopia when Menelik II's troops occupied the lower Omo area in 1897.

From this moment on, thanks to the exploration of Bottego and the annexation to the empire of Ethiopia, there is more information about the history of the Mursi thanks to written sources, albeit few.

Once the crisis due to rinderpest was overcome, the Mursi bought new cattle by exchanging them for other products, such as ivory, that had less value for them.

In the following decades the Mursi, on the one hand, suffered the raids of cattle by the Amhara, who forced them to bring the herds to the Western bank of the Omo River, and, on the other, they were struck by some epidemics, including a disease transmitted by ticks and sleeping sickness transmitted by tsetse flies.

As a result of cattle raids, epidemics, the greater presence of tsetse flies on the banks of the Omo River and a progressive lowering of the water level of Lake Turkana, the Mursi have begun to move North until they reached the valley of the Mara River looking for better areas for livestock and for farming.

This migration inevitably led to clashes with the Bodi for the contention of these territories along the Mara River.

In the 1970s, the Mursi had to face another very difficult period: on the one hand a severe drought that caused a famine, on the other the mutual raids of cattle with the Bodi, exacerbated by drought and famine.

The Mursi managed to gain control over the Mara River but subsequently decided to migrate further to the Mago River Valley where they are still found today. 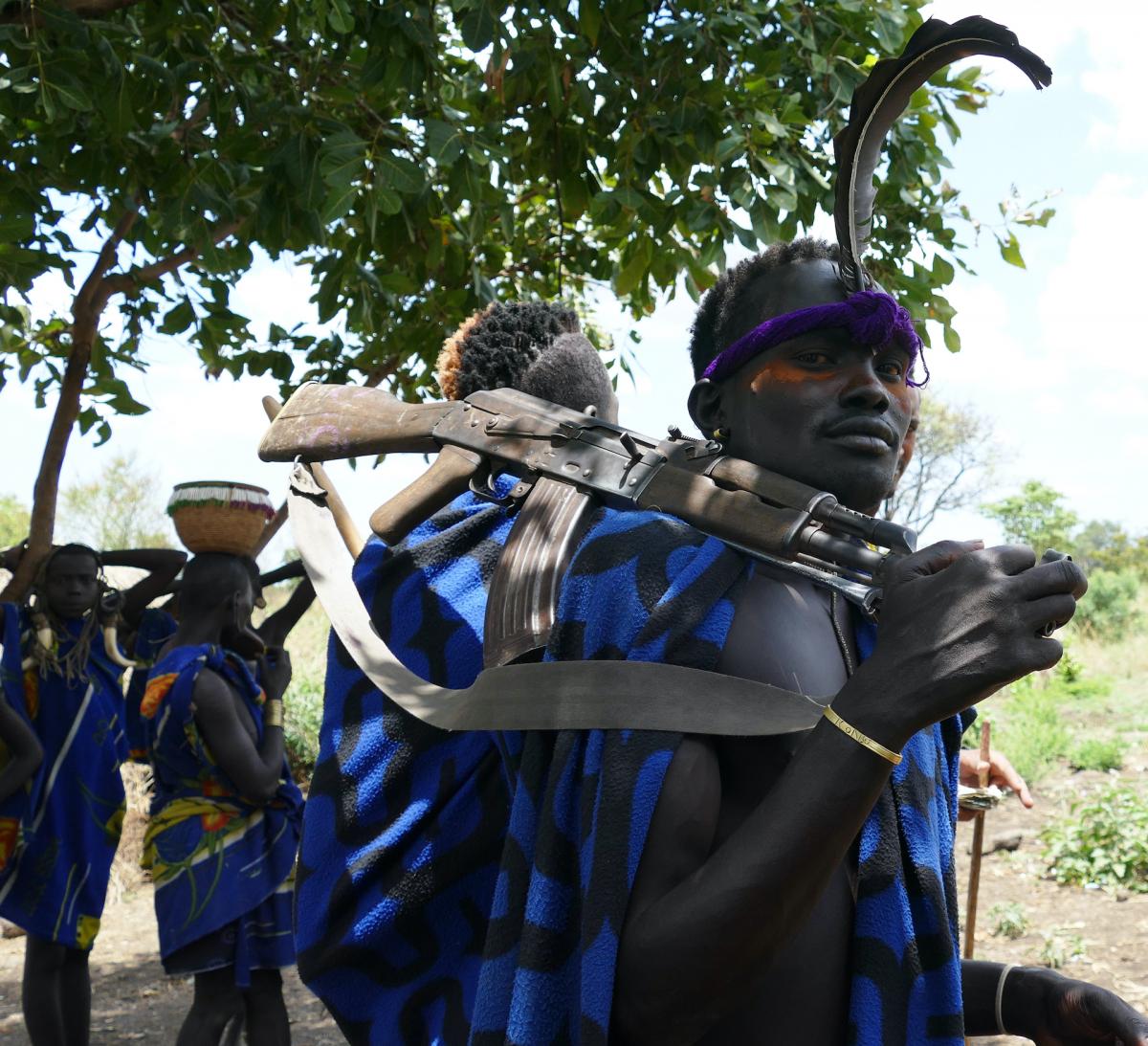