The Kara, or Karo, are a population living on the banks of the Omo River, in Ethiopia; this population has many similarities with neighboring populations, such as the Hamer, but they also have some peculiarities that make them easily recognizable.

Hairstyles of the Kara people

Like the Hamer, some Kara men wear elaborate hairstyles that they build by weaving their hair in tight braids around the skull and forming a sort of chignon, then this is covered with chalk and butter; the final result looks more like a sculpture than a hairstyle.

This particular hairstyle is finished with some large ostrich feathers that symbolize courage.

It takes three days to make this elaborate hairstyle and the hairstyle is redone every 3 or 4 months and is worn for a maximum of one year.

It seems that this particular hairstyle is a sort of recognition that is attributed to the brave warriors.

This kind of cap is usually colored in white, red and black, these three colors have a mystical and legendary meaning; while if a man wears a gray and red colored hood and an ostrich feather, it means he has killed an enemy or a dangerous animal.

In order not to ruin this elaborate hairstyle while sleeping, men use the borkoto, a carved wooden headrest that also serves as a stool.

The women wear a hairstyle that includes the sides of the head shaved while on the upper part of the head the hair is very short and covered with a layer of ocher and fat and, at times, decorated with some flowers; some women wear a feather on their head, this means that they have just had a child and therefore cannot carry weights or carry out heavy work.

The peculiarity of this ethnic group is that, on the occasion of one of their many ceremonies, or on the occasion of an important visit, both men and women paint their faces and bodies, trying to reproduce a design that recalls the animals of the savannah, such as the spotted leopard or the guineafowl plumage.

The colors they use are derived directly from nature found in their lands: white is obtained from gypsum, anthracite from coal dust, yellow from a mineral rock and red from iron dust.

Body painting is an elaborate process and the drawings range from simple and subtle points to elaborate and intricate designs consisting of concentric circles, lines, spirals and handprints; sometimes the striated white and yellow bodies take on an appearance that vaguely resembles that of a skeleton.

This practice of painting the body has a dual function, the first is to be more attractive to the eyes of the opposite sex, therefore it has a purely aesthetic value; the second one aims to have a more threatening aspect to arouse fear among the enemies.

The scarification and piercing of the Kara

Beauty is a very important aspect in the Kara culture and scarification has an important role in the decoration and modification of the body of this fascinating population.

Women inflict lacerations and cuts on their chest, abdomen or back to produce intricate patterns of scarring, all this is done for purely aesthetic reasons; a woman with these scarifications is considered mature and attractive.

Scarring scars are made by cutting the skin with a knife or razor and then rubbing the ash to produce a permanent mark on the skin.

Men also are scarified, but for a different reason: they use this practice to carry on the body the symbol of courageous acts they have performed; the male scars represent that whoever wears them has killed a dangerous animal or an enemy; in the past every scar represented a single kill.

A man who has scars on his chest is held in high regard in his community.

The Kara also practice another form of body modification, both women and men practice a hole in the lower lip, a sort of piercing, and then insert a piece of wood, a metal rod and even flowers.

The clothing and accessories of the Kara

The attention that the Kara devote to their physical appearance and accessories can be seen in the amount of beaded necklaces that Kara women wear; married women also wear two large bracelets above the elbow, and all women, married or not, wear one or more spiral bracelets.

Men also wear accessories, especially copper or other metal bracelets; accessories are often made even by recycling bullets.

In fact, the Kara, like other tribes of the Omo Valley, have long since replaced traditional lances with Kalashnikovs; even if these rifles are more a status symbol than a weapon that the Kara are used to use, every young person who hopes to get married is obliged to have one.

The Kara clothing, unlike accessories, elaborate hairstyles and scarifications, is very simple and essential; in practice it consists of a simple skirt of leather or fabric, sometimes decorated with beads or shells, while the rest of the body is left bare, both for men and for women. 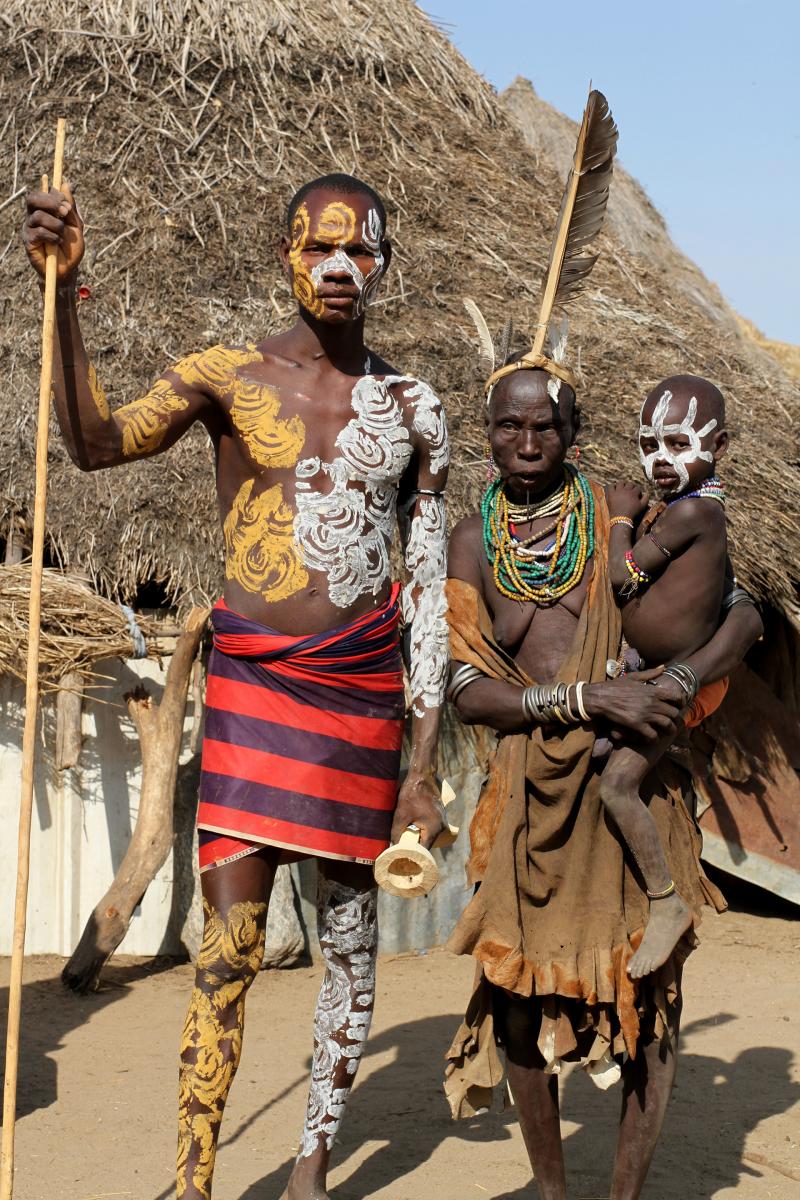 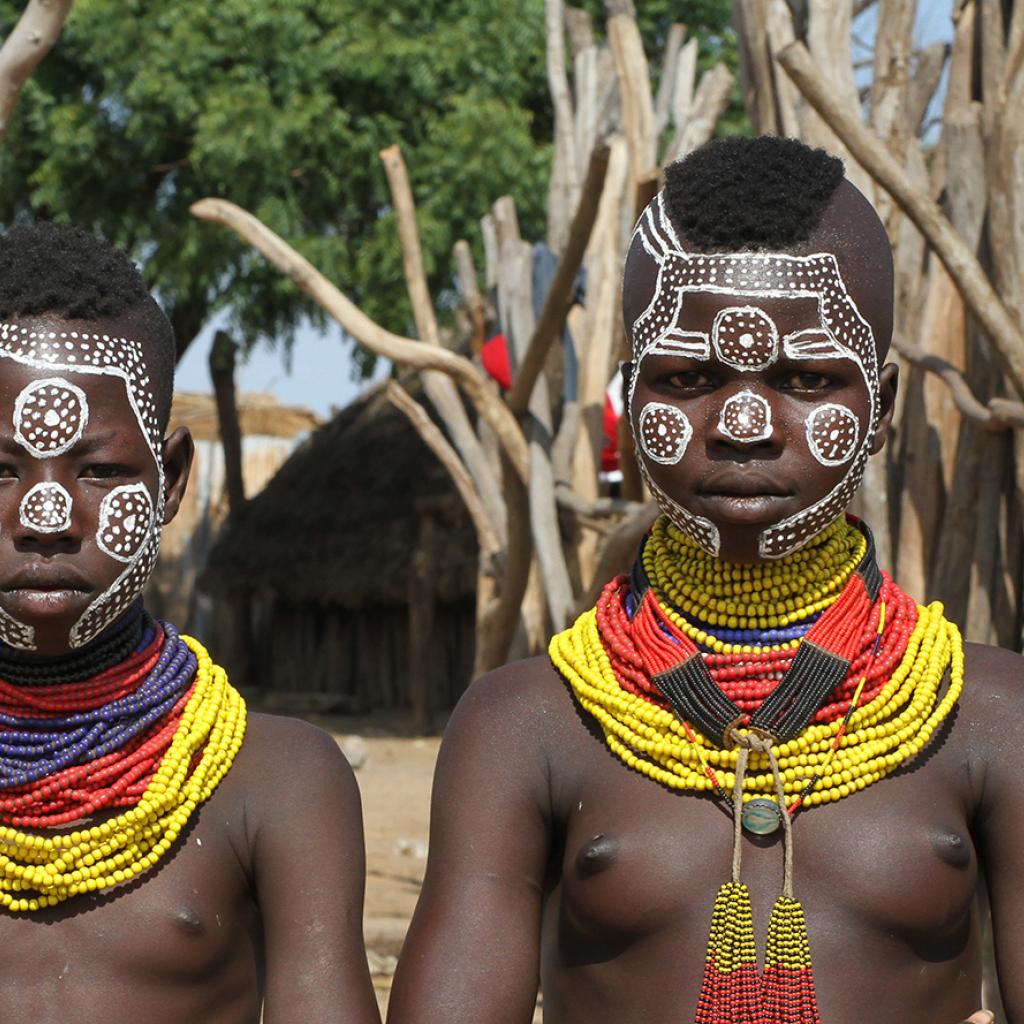 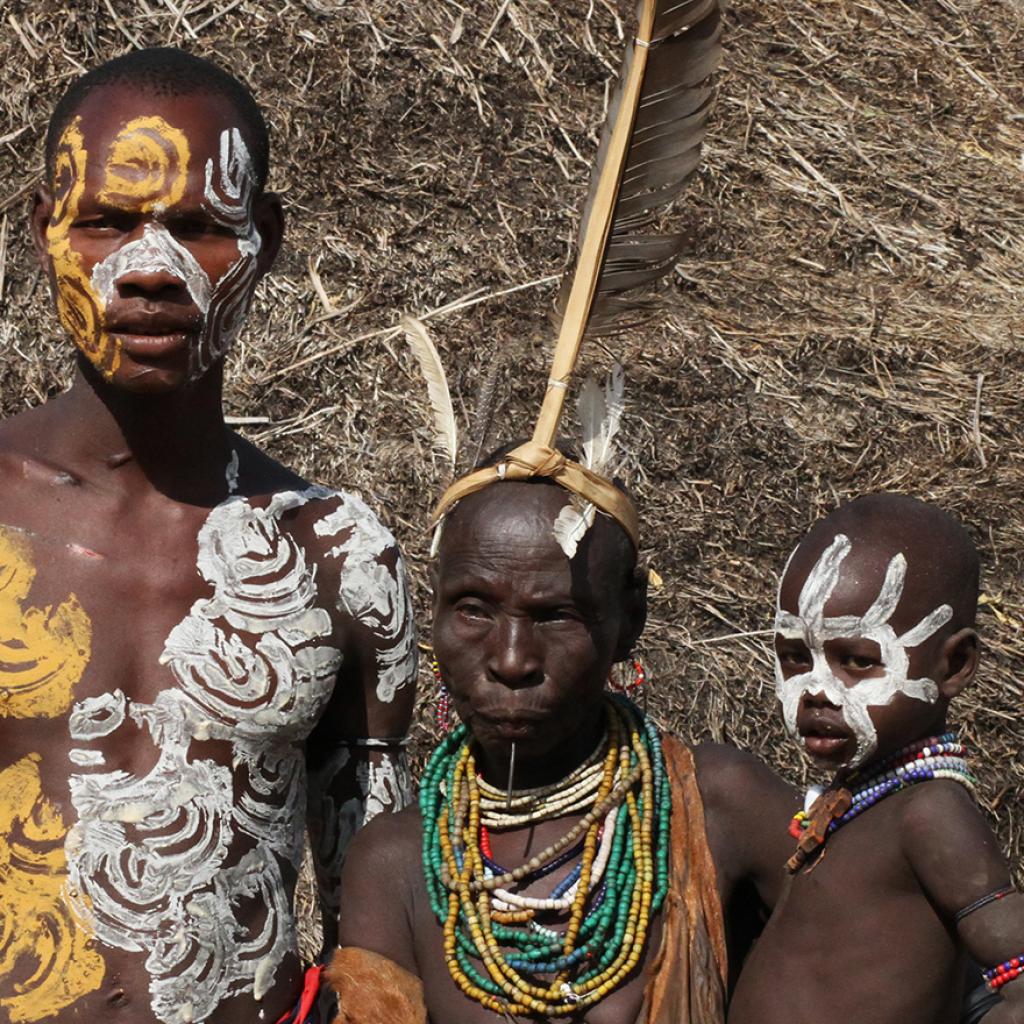 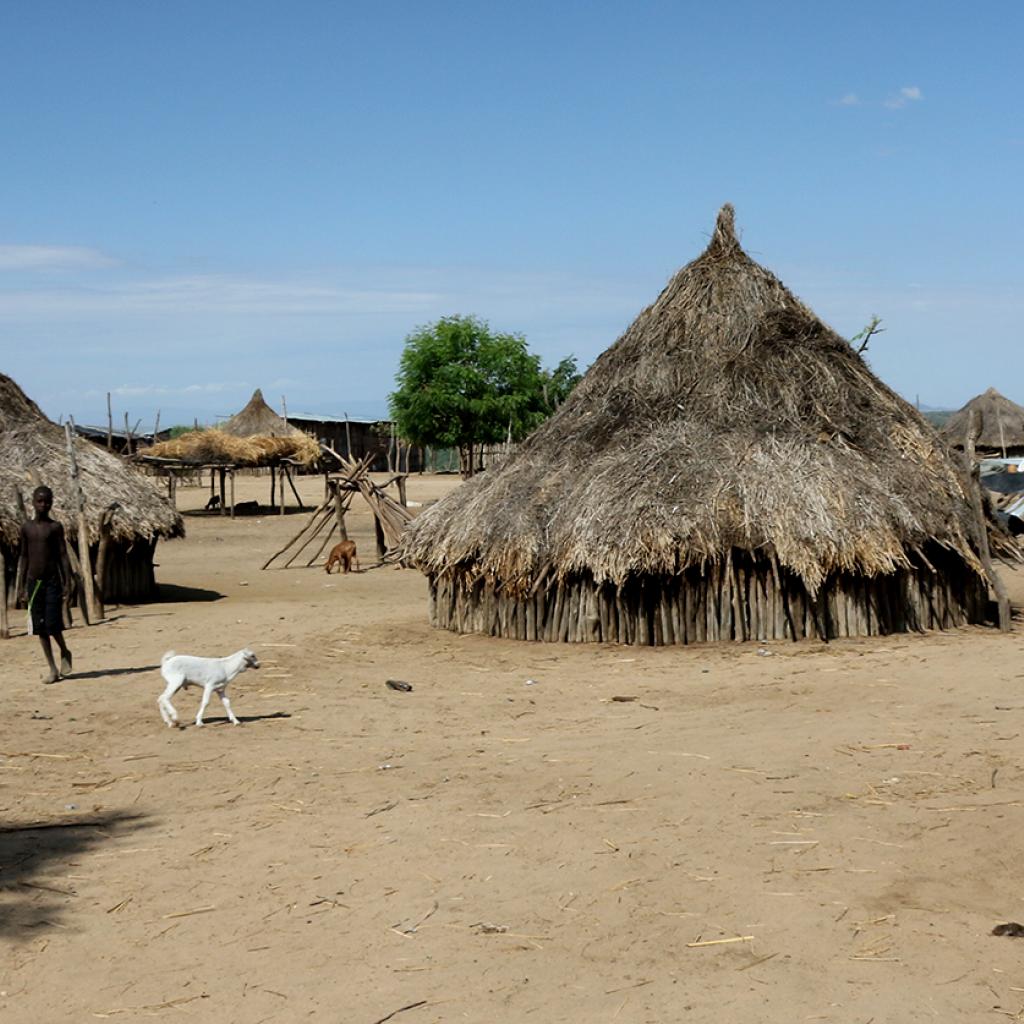 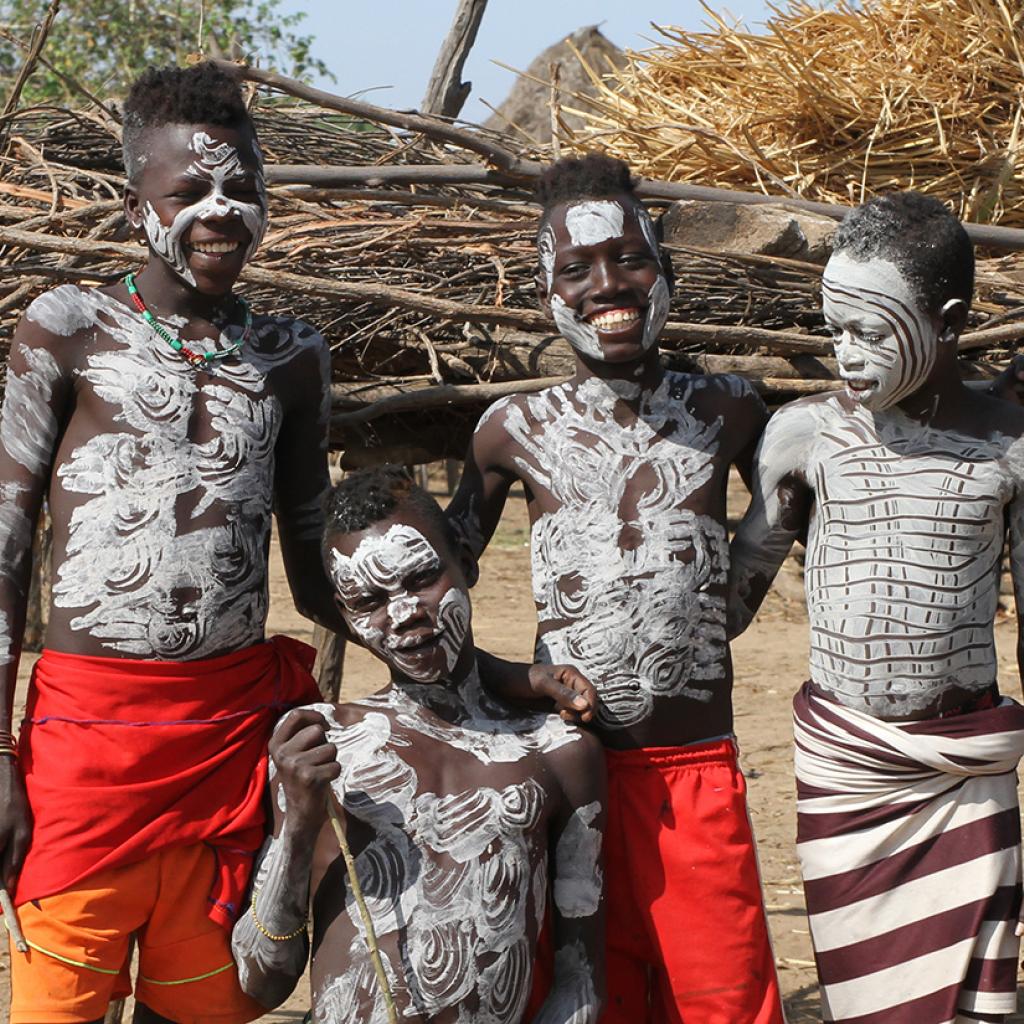