The Hamer are an interesting population living in the Omo Valley in Ethiopia, still following and celebrating the rites of passage and traditional rituals that have been handed down for centuries.

Over the course of their lives, the Hamer face numerous rituals, for example, after hunting, they must perform a ritual to ensure that hunters are successful in hunting in the future, another ritual must be performed every time a man drinks milk.

Rituals and ceremonies affect daily life and various aspects of it, for example some prayers are recited every time a guest arrives at the village or at the hut or when a man drinks coffee.

In the Hamer society shamans and men of medicine have a very important role, these are the traditional figures who are experts in rituals and ceremonies and therefore enjoy a high regard within the village; they are those who perform the different rituals, such as reading the intestines of animals.

Each clan appoints its own Gudili, he is responsible for the rituals of a village, a shaman who, in particular, takes care of the cultivated fields, that are vital for the survival of the villagers; moreover, each clan has its own rituals that Gudili must know and celebrate.

The main tasks of a Gudili are to celebrate, assisted by his assistant, the seasonal rituals of fertility and protection, to guarantee the well-being of a village, to ensure fertile crops and pastures, to protect forests, and, last but not least, the well-being and health of the people of the village and their livestock.

Seasonal rituals are many and concern farms, herds and fields.

There is a particularly important ritual that is celebrated on one evening of the month of Mingi, that is the month contaminated or cursed; to celebrate this ritual the Gudili of a village goes to the bush and collects bunches of sacred plants, that the Gudili and his assistant, the Ukili, will place in every hut of the Hamer village.

At sunset the first part of the ritual is celebrated: the Gudili holds, in his left hand, a bowl with butter or fat from a sheep, and, in his right hand, a black stone; slowly all the children, women and unmarried men of the village approach and parade in front of the Gudili who blesses them rubbing the stone with butter on their hearts and stomachs.

This ritual is celebrated one night when there is no moon, since it is necessary to have total darkness; in this regard all the fires of the village are extinguished and the ashes are scattered while all the villagers gather in a certain place in the bush outside the village.

People position themselves in a circle and remain silent close to one another, while the shaman and his assistant go around the group holding a magical plant in both hands: the Gudili walks from right to left, while his Ukili walks from left to right.

After making four turns around the circle of people they stop with the magical plants in their hands, at this point all the villagers parade in front of them and spit loudly on the plant thus getting rid of disease or bad luck.

After the purification of people, the Gudili goes to the bush and throws the plant in the first rays of sun.

Back to the village, the sorcerer lights a new fire in front of his hut; while rubbing the stick in his hands to light the fire, prayers are recited, blessings are performed and rain is invoked.

When the fire comes to life, the minor children of the families of the village go to the fire with torches, light them and bring new fire to the homes of their fathers.

Among the Hamer, the rituals of passage are of great importance and among these the most important is the ritual of the bull jumping, that sanctions the passage to the adult phase of a young man; it is a complex ritual that must be celebrated by every young person who is planning to marry, it is usually celebrated at the end of the harvest season.

But the Hamer also celebrate other passing rituals related to the birth, puberty and death of an individual.

The Hamer ritual linked to the birth of an individual requires that, when a child is born in the village, a ceremony is held to give the child a name: the paternal grandmother prepares the coffee and, when the coffee is ready, the father of the child puts four gali leaves in a bowl and then four ladles full of coffee are served.

The grandmother then prepares a large bowl of coffee, a large piece of fresh white butter, a beaded string and an iron bracelet for the mother of the child.

The bowl is delivered to the older son who passes it first to the child's mother and then to all the women who attended the ritual, the women take the bowl, sip four sips and then take the butter and rub it on the neck.

The bowl then passes to the men who sip four times and take the butter to rub it on their forehead.

When this phase of the ritual ends and the coffee is drunk by everyone present, the child receives his name.

The final blessing occurs when the grandmother puts pearls or an iron ring or a headdress on the child and the father puts branches on a cowhide; from these branches the bark is obtained that is worked and twisted to create ropes that are tied around the child's neck, waist, wrists, elbows, knees and ankles.

The child is then placed on the bovine skin to finish the ritual; for the ritual to be effective the cow must belong to the father of the child, if the cow was stolen from another tribe, during the theft there must have been no victims otherwise it will bring bad luck.

Hamer rituals of death vary according to who the deceased is, however the dead person must be buried in Hamar land; if they were buried in enemy territory, they would have no rest and would be tormented by the spirits of dead enemies.

There are different and complex rituals performed according to the actions that man has done in life such as lending cattle to other men, stealing cows from other tribes or paying a cow with goats.

The funeral begins by presenting the deceased's possessions that must be divided among his descendants, in particular the cattle.

During the funeral the widow, and every married woman who participates in the ceremony, collects four bunches of sorghum with which they make a drink and each participant must drink 4 sips.

The sons of the dead, in order of seniority, enter the father's hut, massage butter on the forehead and right side of the deceased's head, while asking the father for the cows and goats they want to receive as an inheritance.

After the man's livestock has been divided, the corpse is taken to a new hut built in a livestock enclosure, here a male calf is sacrificed, its throat is cut and later it is skinned and the skin is used to wrap. the dead; at this point he is left in the new hut for two days and two nights.

The corpse is removed from the hut to be buried in a place outside the village, the body is laid down on the left side, so that it can look up towards the sunrise.

The tomb is excavated using tools that belonged to the dead and, once the body is buried, men and women lay stones to cover the tomb and protect it from hyenas, finally a large elongated stone is placed in the center of the pile of stones; for the Hamer this stone has a size ranging from 40 cm to 80 cm, while for the Banna the stone can reach a size of 1.5 meters.

At the end of the burial ritual, a goat is sacrificed and all wash their hands with the blood of the sacrificed animal.

The ceremony ends with sons and daughters waving tufts of sacred plants and asking for the father's protection for the family and livestock.

The celebrations of a man's funeral can last up to a month, and guests in addition to partying with grilled meat and beer, shoot with the Kalashnikov to greet the dead person and to express their affection.

The burial of an elderly woman is simpler, a goat skin is tied over the entrance of her hut and the body of the deceased is left within two days to rest.

The village elders gather at the woman's hut and drink milk and water, or beer for the wealthiest families, using containers made by carving pumpkins.

Two days later, the group of family and friends sings the praises of the woman recalling what she has done during her life, such as raising her children, and what she has done to contribute to the wealth of the village.

The body is then buried in a pit while the elders cover the grave with stones and, subsequently, a large stone is placed on it.

Then there are several burial rituals that are celebrated based on the social status of the deceased.

A married girl is buried on her side, a goat is sacrificed and two large stones are placed on the grave while her younger brothers and sisters shave their heads.

If a married man who has not yet had children dies, his older brother's son buries him without placing any stone on his grave.

If a man dies in battle but his penis has been left intact and not removed by the enemy as a sign of contempt, everyone says that he died from a snakebite rather than in battle, and the appropriate rituals for his age are performed.

While if a man dies in battle and his penis is cut by the enemy, he is considered mingi, or cursed, he will not be buried but the body is thrown to the vultures and hyenas; a purification ceremony is also needed, therefore, with a very sharp stick, a completely black goat is killed by hitting it in the throat, then, in the light of the sunset, both the stick and the goat's body are launched through the door of the cattle fence while family members shout "Go away!"

If someone commits suicide by hanging himself, the rope and tree used to take his own life will be burned and then rituals will be followed based on the social status of the deceased.

There are different forms of divination in the life of the Hamer, a Moara is the expert in any type of divination.

If people suspect that someone has not been properly buried, the Moara will consult the intestines of the animals to understand which rites were not performed correctly and what needs to be done to amend. 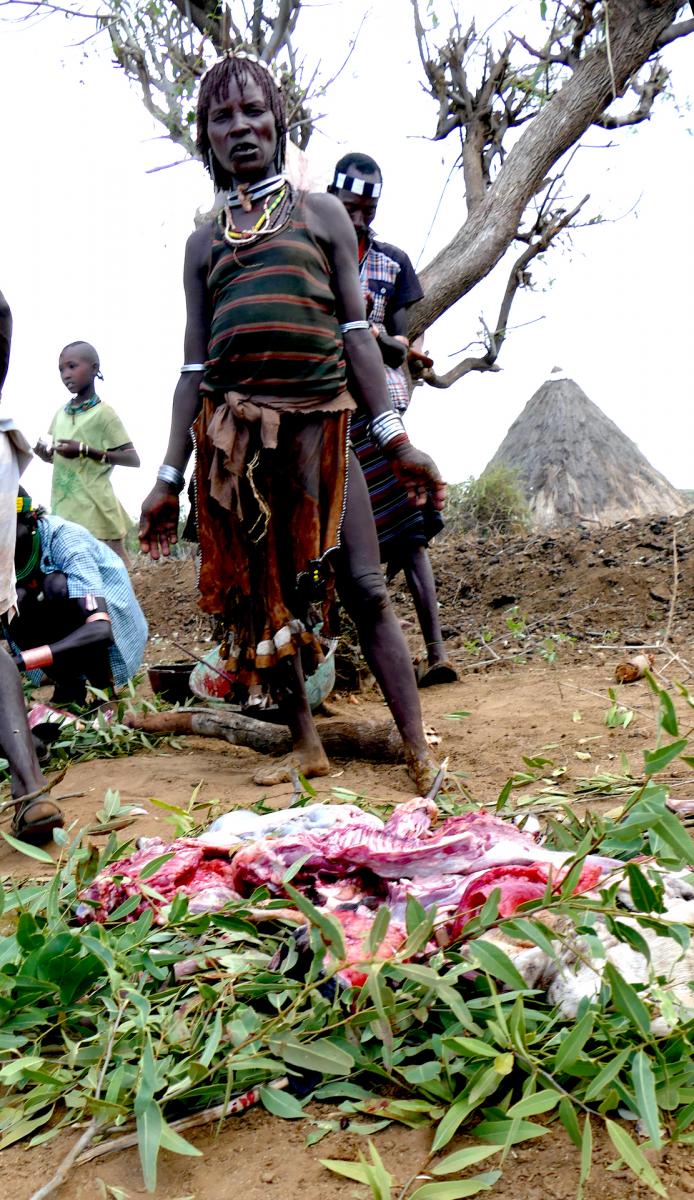 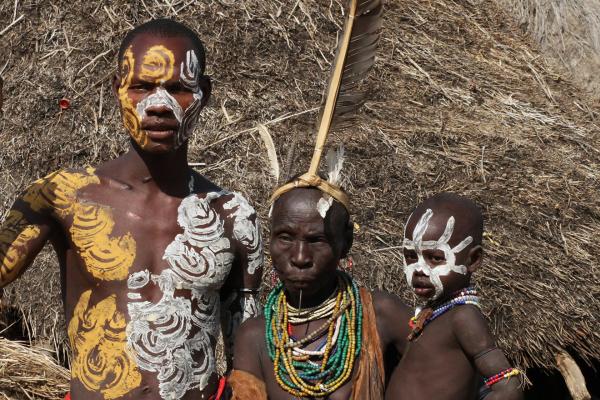 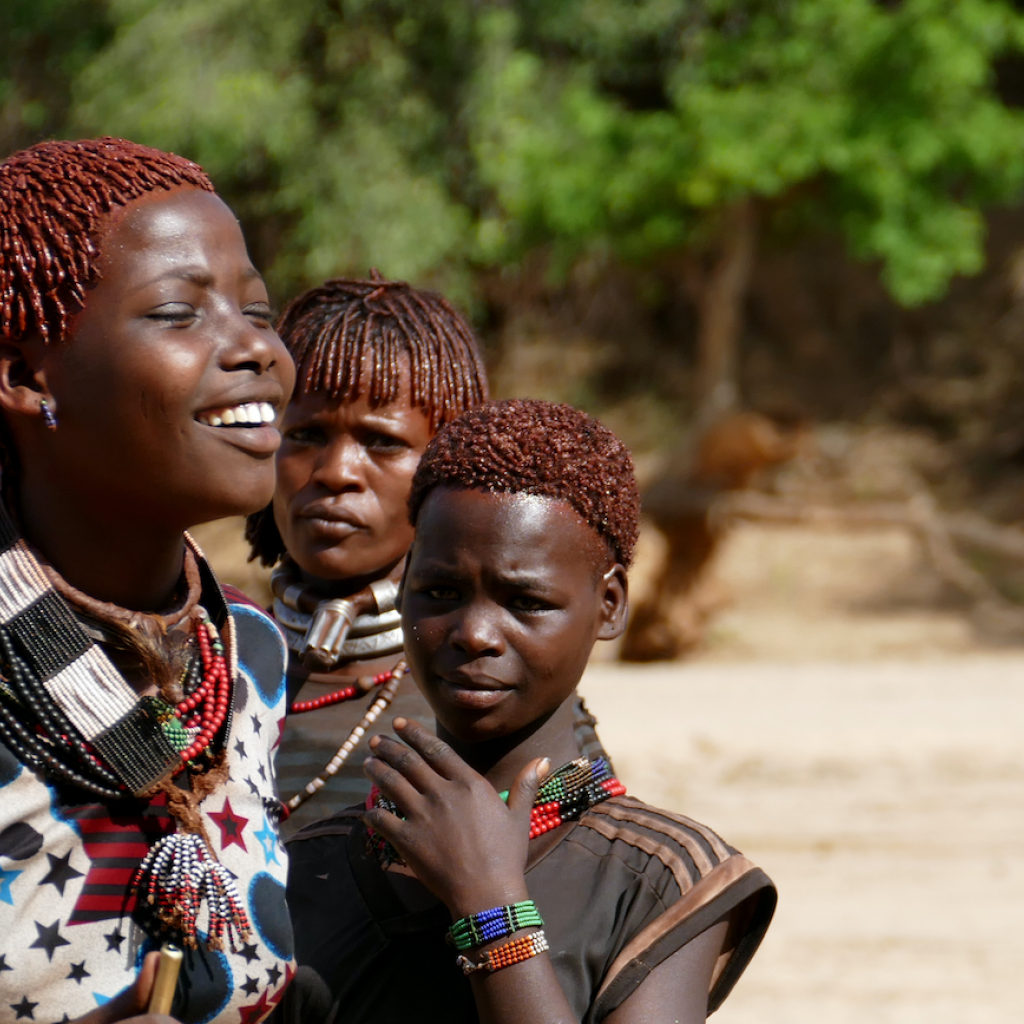 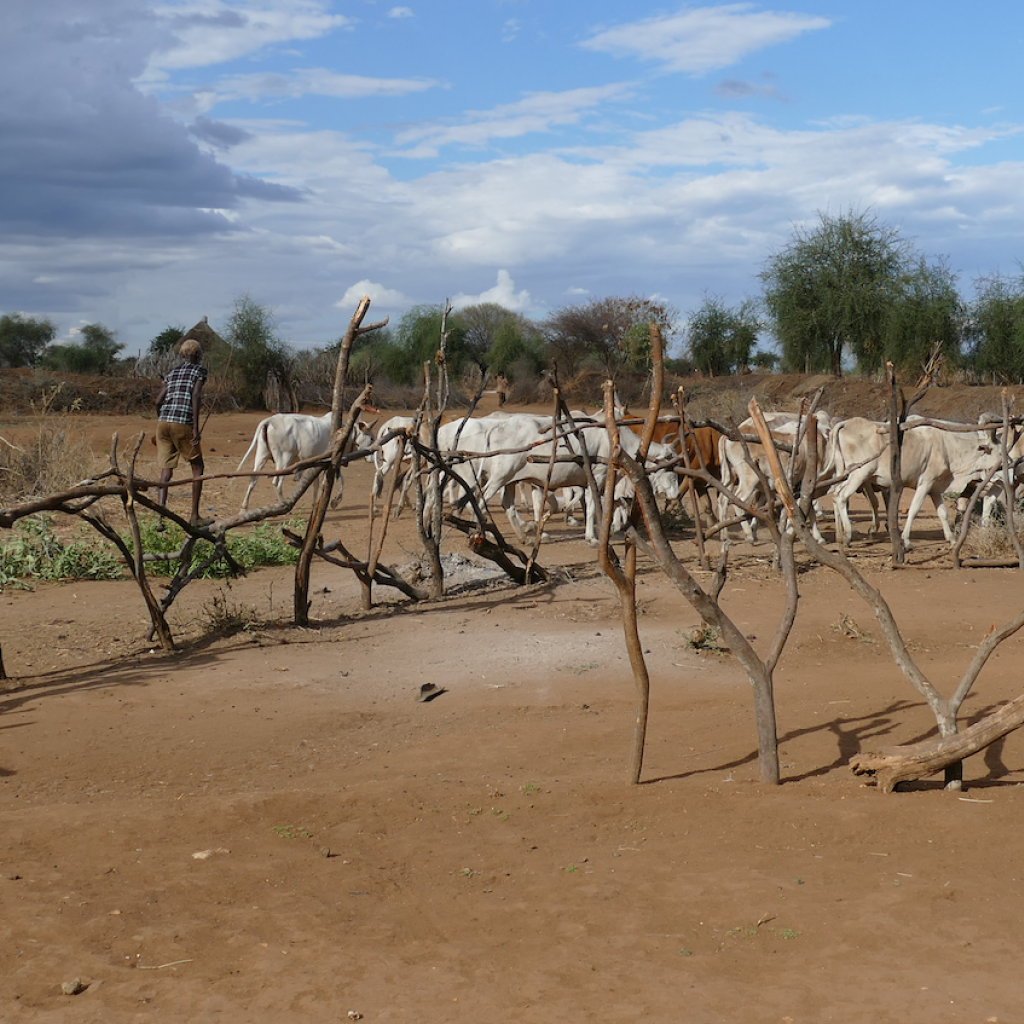 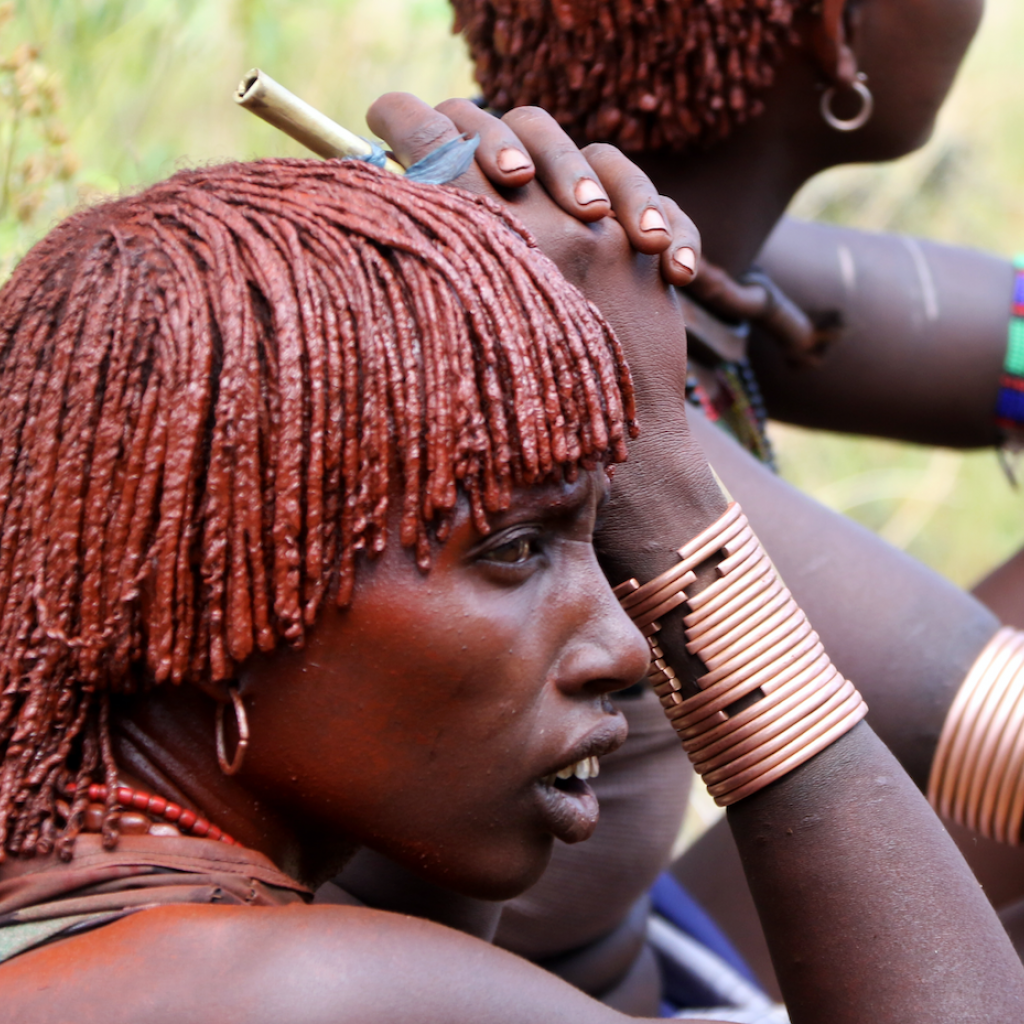 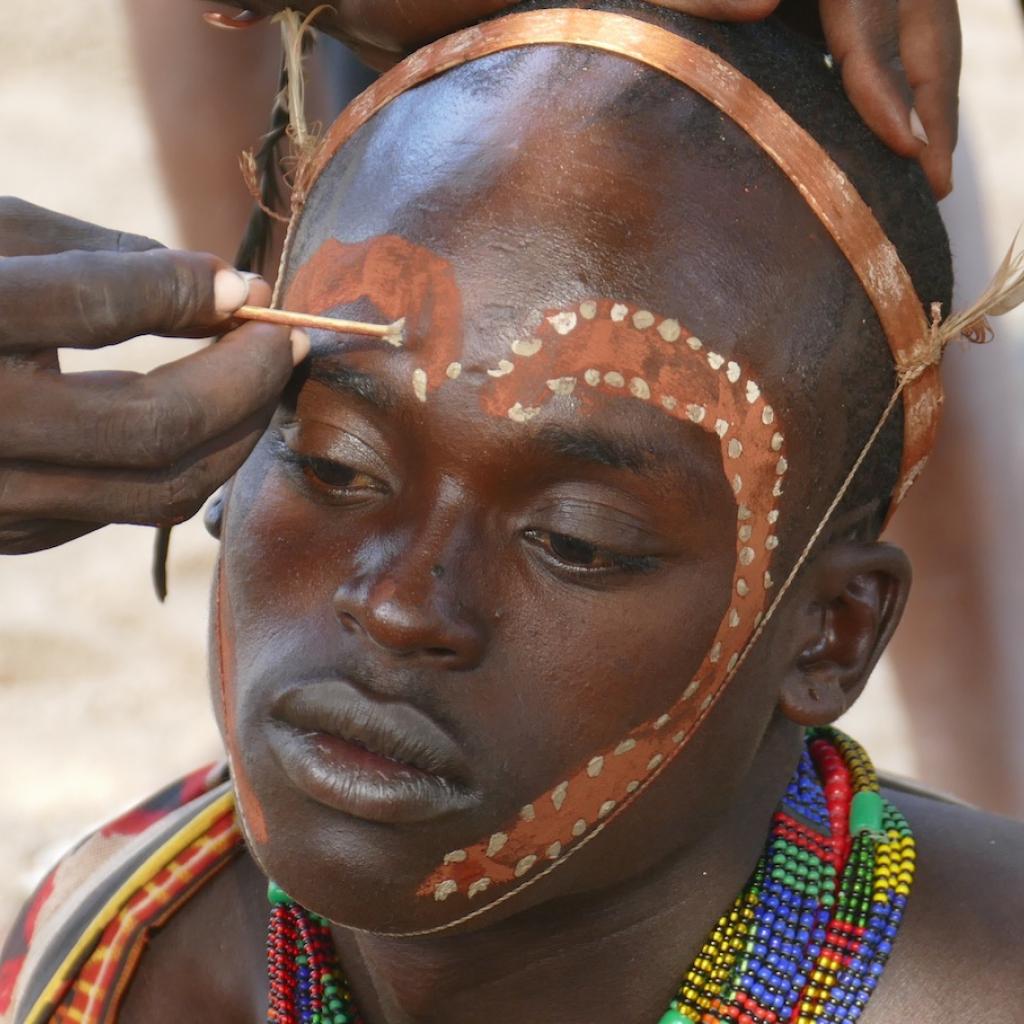 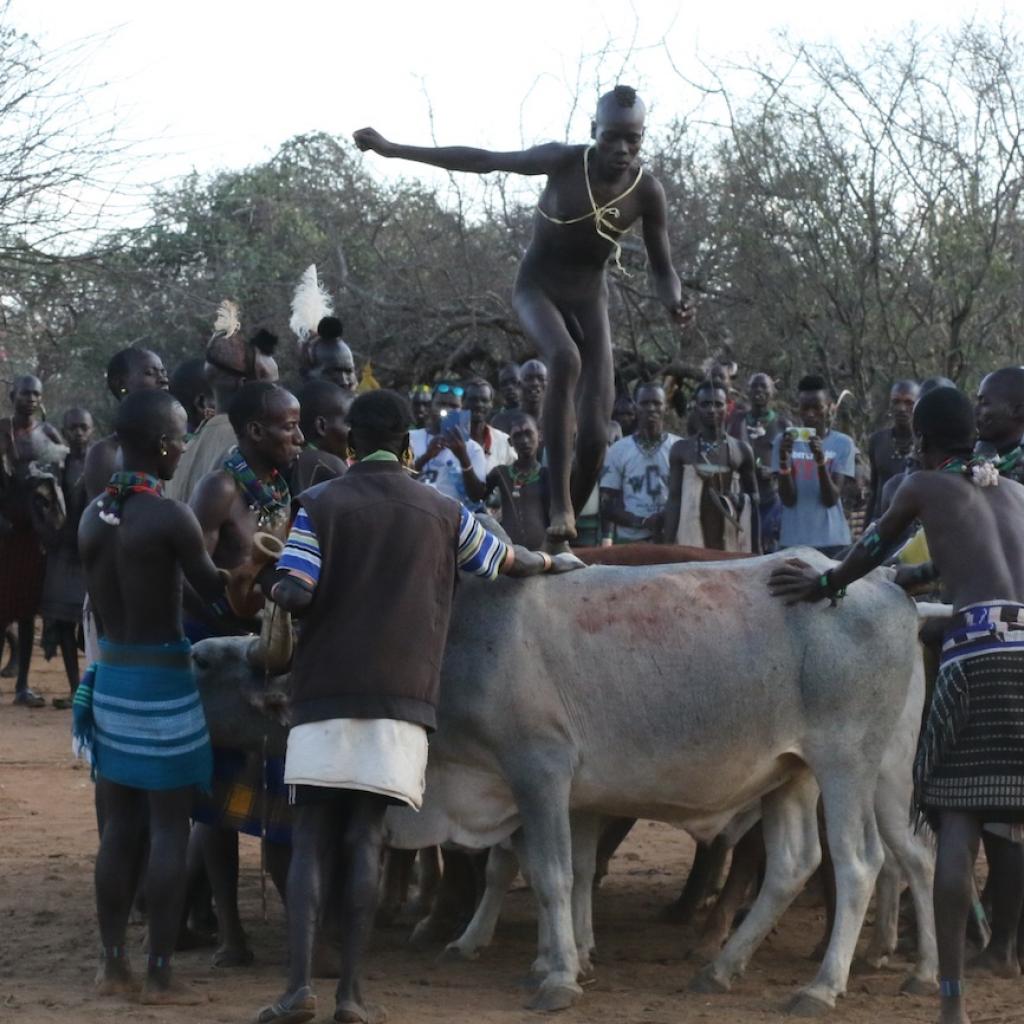