The Hamer are one of the populations living in the Omo Valley, that is located in Southern Ethiopia; this population still live according to tradition, practice ancestral rites and celebrate the ancient rituals of passage.

For the Hamer, livestock have great importance and enormous value, in fact, in addition to being farmers, this tribe are breeders of cows and goats and, in the plateau where they live, they can benefit from abundant rains and the floods of the Omo River, useful in order to feed and water the cattle.

The Hamer still live in respect of ancient beliefs, they practice different rituals and ceremonies, among them one of the most important rites for their culture is the Ukuli, in the Hamer language; this is the rite of passage to go from puberty to adulthood, that every boy must perform in order to be considered a man, to be able to marry and create his own family, this rite of passage ends with the ritual of jumping the bull or bull jumping, that is the most salient and best known moment.

For the Hamer, the Ukuli is the most important of the rituals and the bull jumping is only the latest in a series of rites and tests that bring to completion the symbolic metamorphosis of the initiate, from a young age, considered contaminated, to the pure state of adulthood, at this stage a man can marry and legitimately have children.

In the past, a young man could only face the bull jumping ritual after passing a test of courage that consisted in killing a dangerous animal, such as a crocodile or a hyena; today, fortunately, this part of the rite of passage is no longer practiced but it is the family of the young man who decides when it is time to perform the ritual, usually the rite of the bull jumping is celebrated at the end of the harvest season.

When the father decides that his son is ready to face the bull jumping ritual, he gives the young man a special stick called boko, the boy must visit all his relatives carrying the stick with him to announce that he will prepare to perform the ritual and to invite them to participate in the ceremony and the following party.

The young man invites the relatives by giving them a strip of bark that presents a series of knots, the number of knots represents the number of days left for the ceremony; every day the relatives cut a knot of the bark, in this way they are able to keep track of how many days are left until the day of the ritual.

In the period preceding the bull jumping the boy spends time with a male adult who mentors him and teaches him the behavior, rituals and everything he needs to know to become a man.

When the date for the bull jumping ritual approaches, the initiate's relatives arrive at his village, bringing a goat or a sheep as a gift; in the village, a space is set up for the occasion, covered by a canopy to provide shade to the participants, who gather here to talk and drink sorghum beer.

The initiate's female cousins ​​grind sorghum to prepare food while the other girls of the village prepare sorghum beer.

On the day of the ceremony, the young initiated is stripped of all his goods, including clothes, the one clothing that he is allowed to wear is a small piece of fabric or leather to cover the intimate parts.

The young man is also partially shaved while the Maza, the men who have already faced the bull jumping ritual but are not yet married, smear him with bovine dung to give him the strength necessary to face the test, they also rub him with the sand to wash away his sins; from this moment until the moment of the bull jumping the boy cannot touch women and only eats sorghum, honey and drinks milk.

The ceremony is not celebrated at the village but in a designated place, usually along the bank of a river, the participants move all to this place to take part in the celebration; once they get there they start a series of activities that will culminate in the bull jumping.

The women wear traditional clothes and large anklets with many bells that ring at each dance step or at each jump they make; also many women have a metal trumpet that they play to celebrate the young man and to express their joy.

Between one dance and another, the women demonstrate their devotion to the young initiated and try to encourage him by being whipped on the back by the Maza; the women position themselves in front of a Maza and play the trumpet, at this point they receive from the man a lash with a thin and supple branch, when they receive the blow the women do not have to complain or express pain, just so they manage to achieve their intent.

In reality, the Hamer women reach a state of ecstasy thanks to the sorghum beer they drink, the dances, the sound of the bells and the trumpets, and this allows them to face the whipping in the best way; this test is very important for these women as it expresses their pride in belonging to a clan and represents the sacrifices they are ready to make to support and sustain the young person.

The lashes cause deep cuts on the backs of the women, the wounds also bleed profusely but they refuse to surrender to the pain; the greater the endurance of pain and the higher the loyalty they demonstrate to the young person, it is a sort of competition between women.

The scars that will remain on their backs, often very high and thick, create a sort of debt relationship between the young man and the women who supported him, in times of need the young man will have to help those women who have proved so loyal toeards him.

The girls dance all afternoon while the Maza, the initiates who have already jumped the bull and are in charge of helping young people to overcome the ritual, paint their bodies and their faces before the final act of the ceremony.

They then use bark strips that are tied around the young man's torso, starting by creating an X on the back and chest, this represents a spiritual protection for the boy.

Just before sunset the boy prepares for the most important test of his life, he must pass the rite of passage to become a man and be able to marry; he must test his courage, strength and agility.

The Maza group their cattle and begin to turn around the cattle and make four turns; at this point the oldest Maza captures the bull that will be the first in the row and then, in turn, the other Maza catch the other cattle and join them to the first, until they form a row of at least eight cattle.

The aligned bulls are smeared with dung and butter to make them slippery, at this point everything is ready for the final test; the Maza keep the bulls still while the women stop dancing and the silence descends in this dusty place.

At this point the initiate, naked and partially shaved, prepares to jump, he concentrates, takes a run and jumps on the back of the first bull, then runs on the backs of all the other cattle lined up to reach the other side and get off the ground.

He must repeat this jump at least four times but the boy can choose to jump additional times and add more cattle to the line if he believes he is particularly strong and prepared.

After the last jump, the boy is grabbed by his ritual assistant while another Maza bites the bark straps that protected the initiate to remove them.

If the initiate manages to complete the whole jump of the bull without ever falling, the test is considered passed and therefore he becomes part of the Maza, from that moment he can marry the girl that the family has chosen for him; in case the boy fails the test he will have to wait a year to face the test again, but his family is covered in shame.

At the end of the ritual the new Maza is completely shaved by the other Maza and his relatives congratulate him, sing and dance and get ready to celebrate a big party that will continue until the early hours of the day.

Maza status will last until the new adult decides to marry, usually a few months before the wedding.

If a young man is blind or paralyzed he will be raised above the cattle by the Maza, or he will be allowed to run under the neck of the cattle.

A big party is celebrated at the village involving all those who participated or witnessed the ritual of the bull, meati s roasted, sorghum beer is drunk and they all dance and sing until dawn.

The following morning all the guests return to their village and the new Maza drinks milk directly from a cow's teat, as a sign that he will never return to the impure state of a child. 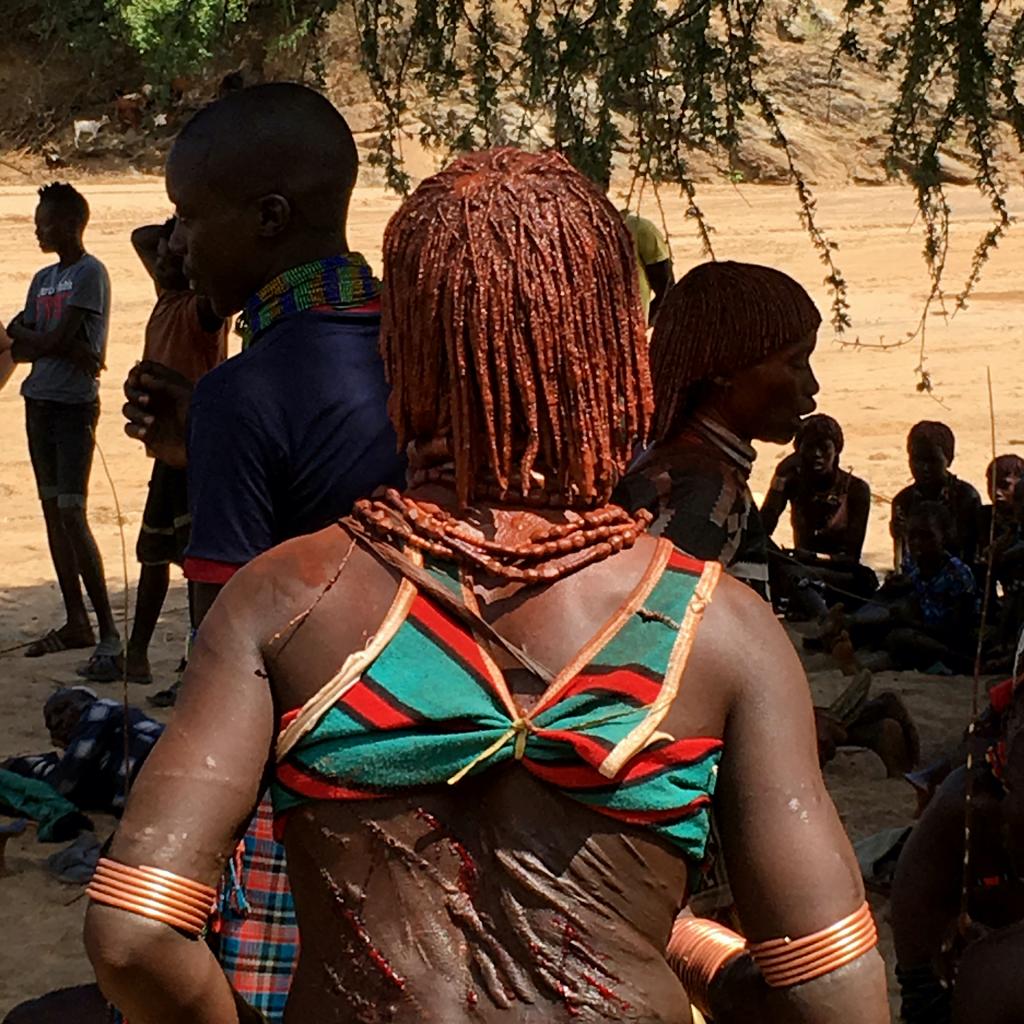 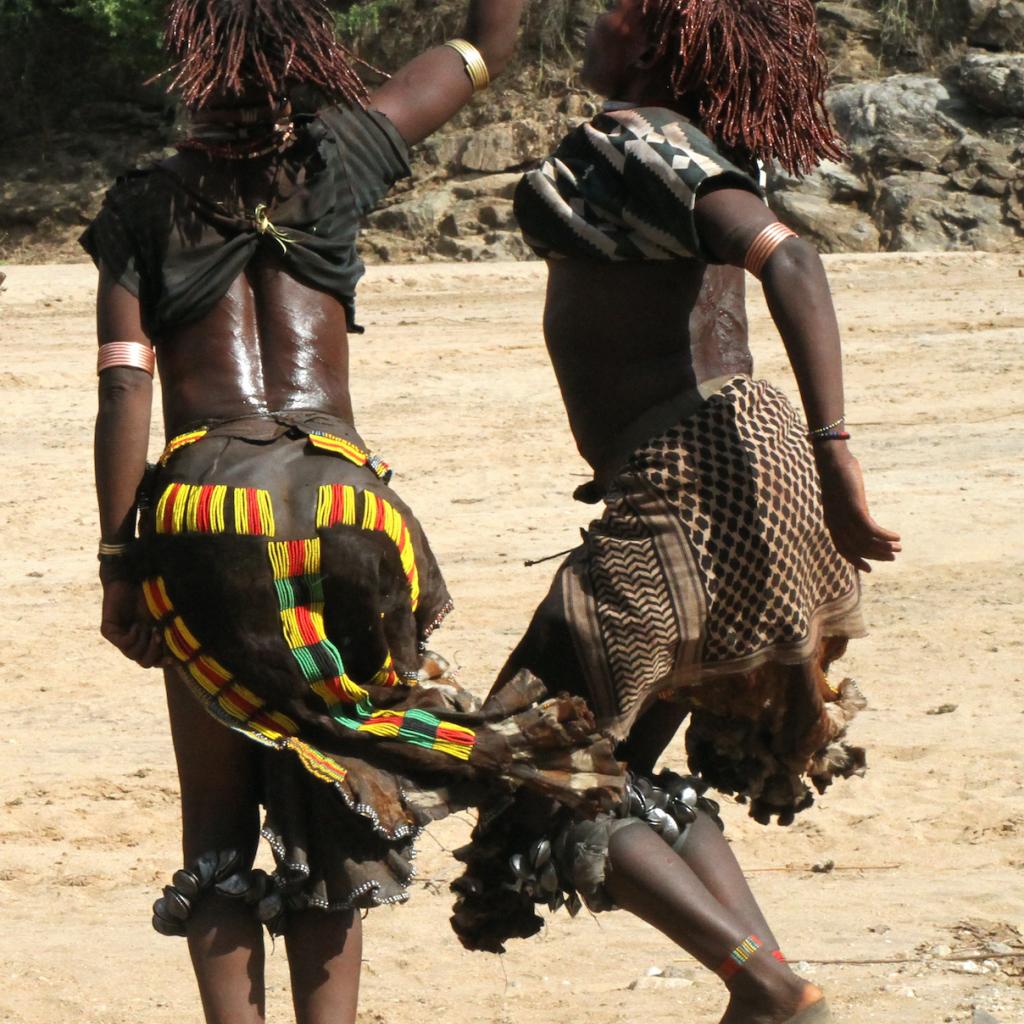 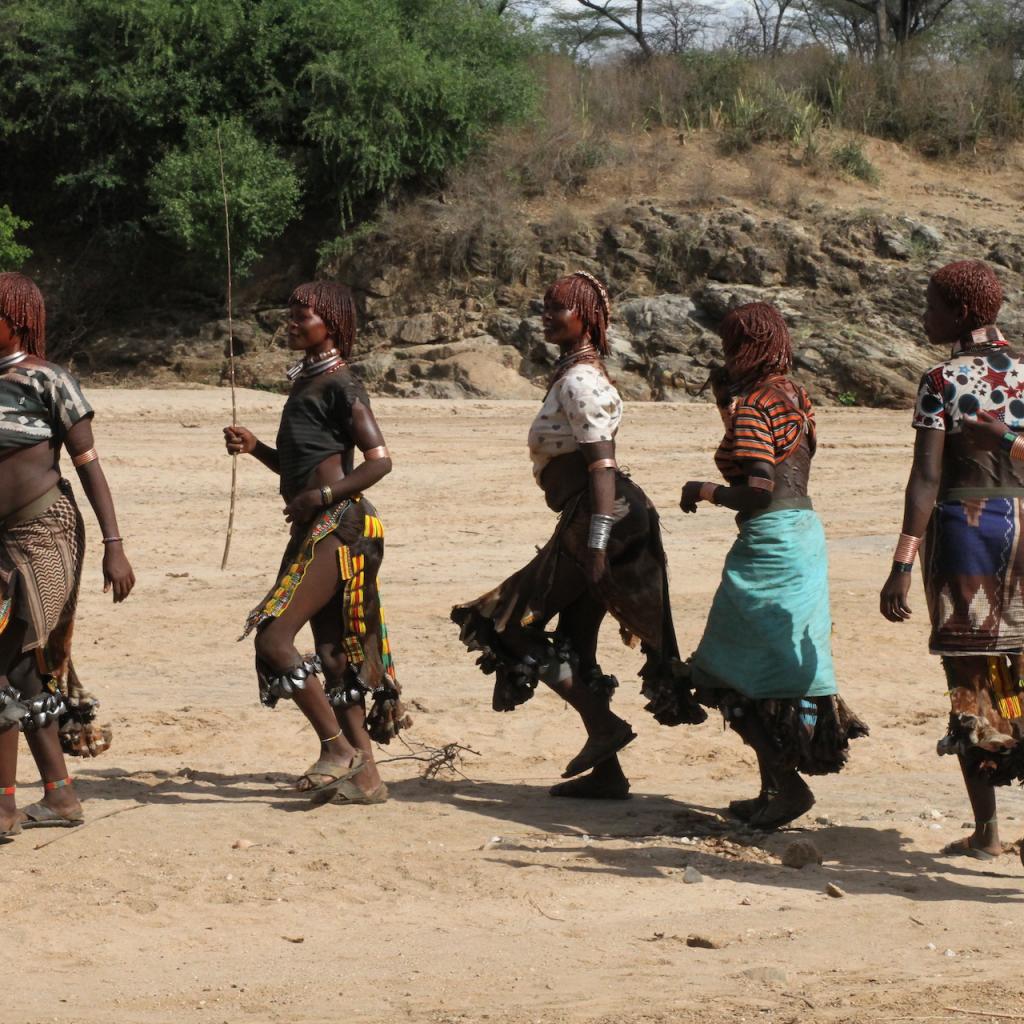