Did you know that the honey badger is not afraid of anything or anyone? 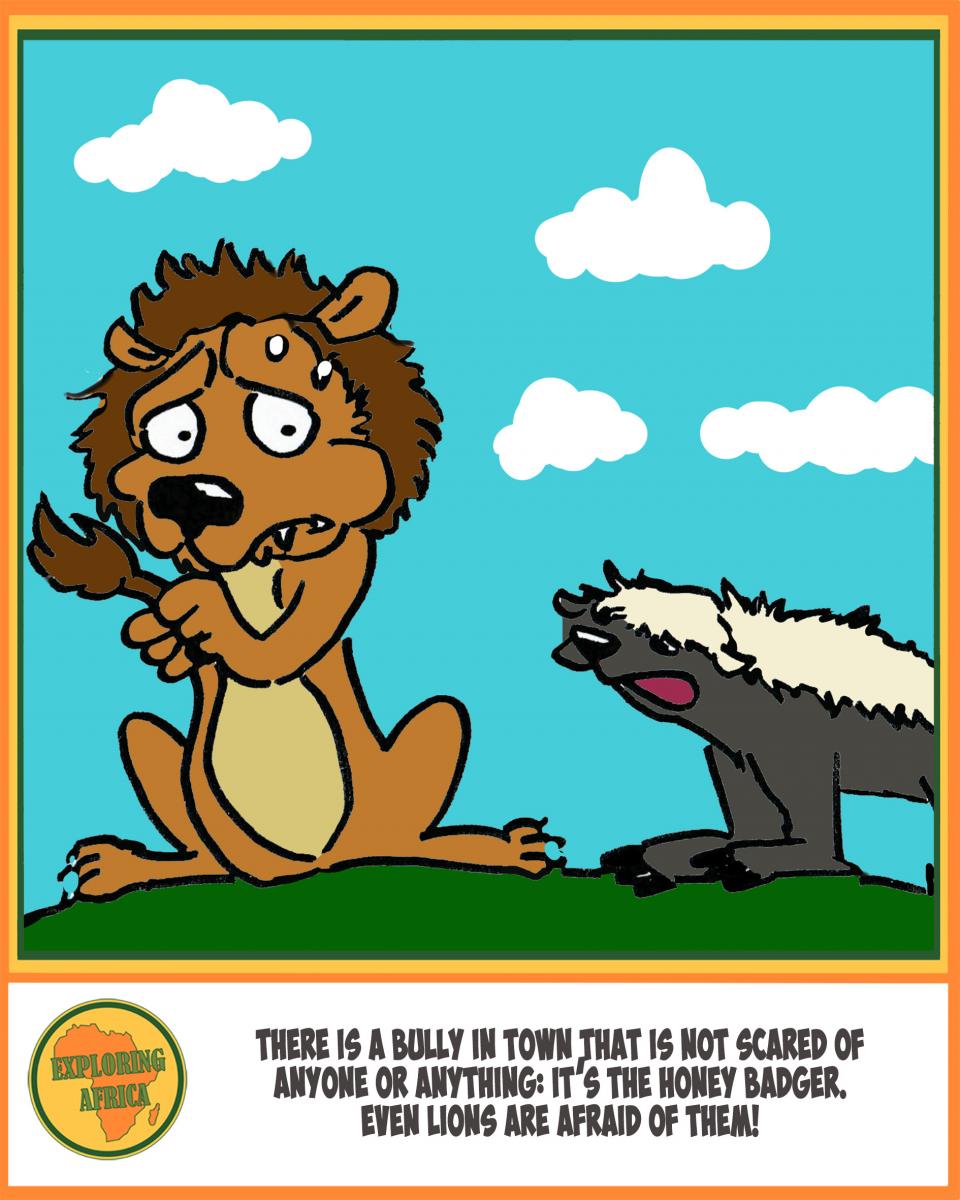 The famous Scientific American magazine long ago published an article in which it claimed that the most aggressive mammal in the world was not the tiger, the lion or who knows what other predator, but the honey badger.

Even the Guinness Book of Records has attributed the primacy of the world's most fearless animal to the honey badger while National Geographic defines it as the worst animal in the world.

The bad reputation of the honey badger is more than justified, it has a bold and tough attitude, it is the true bully of the African savannah.

The honey badger has a height ranging from 23 cm to 28 cm, a length from 55 cm to 77 cm and a weight of less than 16 kg, but, despite its small size, it has great strength, has a very strong jaw, sharp teeth, very long claws and a defense system similar to that of the skunk, that allows it to emit terrible stink secretions.

The honey badger, or ratel, whose scientific name is Mellivora capensis, is part of the Mustelidae family, this family also includes otters, weasels and wolverines, a group of animals all rather aggressive.

This innate aggressiveness means that the honey badger does not fear practically anything, numerous videos and different evidences by the rangers of the national parks and reserves demonstrate how the honey badger manages to stand up to the comparison with a pack of lions or with buffaloes or others more powerful and larger animals up to 10 times its size.

The honey badger has a very thick and hard skin, covered with thick fur, a sort of armor that protects it even from the bites of lions that have difficulties to tear its skin.

In addition, the honey badger literally manages to turn inside its skin; in fact, in addition to being thick, the ratel's skin is almost separated from its body and allows the animal, if caught by a predator that holds it by the skin, to turn inside it and to go on the counterattack, biting and scratching the assailant's face.

In reality, the honey badger is led to avoid potentially dangerous clashes, but often it happens that it runs into other animals because it is suddenly surprised while digging for food, moreover it often cannot hear in time the approach of a potential danger and poorly developed eyesight does not help; in all these cases the confrontation is inevitable and the honey badger attacks relentlessly growling and never backing off.

The incredible immune system of the honey badger also makes it immune to the venom of snakes and other reptiles, even the deadly poison of the King Cobra and the blowing viper or Puff Adder have little effect on the badger, that usually only accuses a temporary stun, after which it will continue the hunt for reptiles until it has killed them and then eat them.

The same defensive system also protects it from bee stings that defend their hive from attacks by the honey badger; this small mammal owes its name to the fact that it loves to eat honey and bee larvae.

To find the hives, the honey badger has developed a symbiotic relationship with the honey indicator, or honeyguide, a bird known for whistling the presence and position of wild hives.

The bird brings the honey badger to the tempting reward, when the ratel finds the hive it sacks it devouring the bees and extracting the honeycomb; when the badger finishes its feast, the bird eats the remaining bees, now dead, and the honeycomb pieces, thus obtaining the well-deserved reward.

The honey badger is omnivorous and, in addition to honey and bees, eats practically everything: carrion, scorpions, snakes, birds, mice and even larger animals, such as antelopes and buffaloes; it also eats some flowers and fruits that, especially in arid areas, allow it to obtain liquids.

The honey badger hunts some prey in a rather bizarre and cruel way: thanks to its powerful jaw and sharp teeth it bites the scrotum of its victims, this part, very rich in blood vessels, once injured, causes a lot of blood loss to the animal that weakens to death.

In conclusion, the badgers can live practically anywhere, they are present in the Kalahari Desert in Namibia, Botswana and South Africa or in the Sahara, they live in the dense rain forests of the Democratic Republic of the Congo, in the savannahs of Zambia, Zimbabwe, Tanzania, Kenya, just to name a few; they have adapted to live in the Afro-Alpine steppes of Ethiopia, as well as at sea level even if they actually prefer the driest areas.