Did you know that drinking is dangerous for a giraffe? 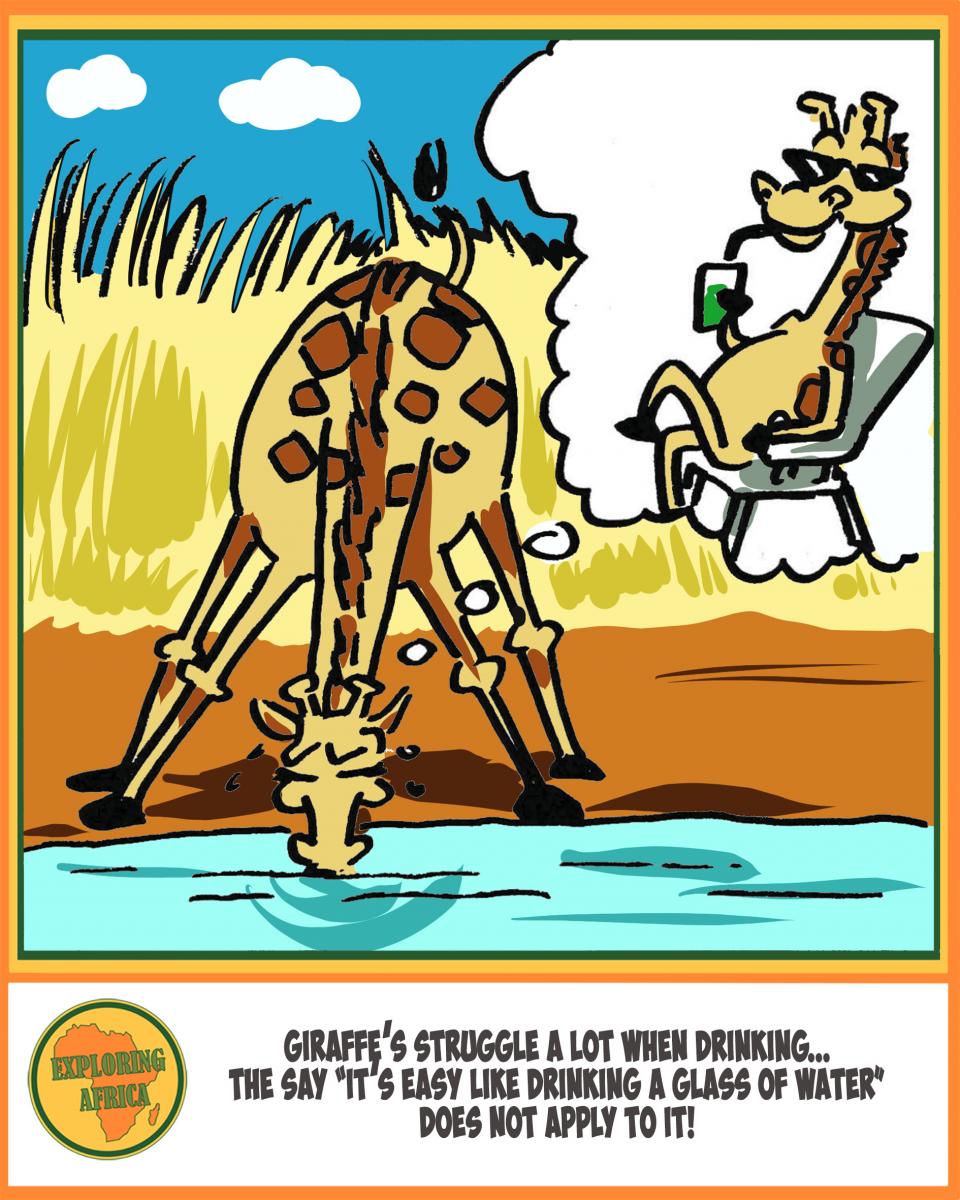 The giraffe is the tallest animal in the world and its silhouette is unmistakable: long and tapered legs, a massive body and a very long neck.

Unfortunately, however, the giraffe's neck is too short to reach the ground, or its legs are too long, it depends on the point of view; eating is not a problem for the giraffe, because it feeds on leaves and twigs from the trees that only it, with its 5 meters in height, can reach, but bending over to drink is really complicated.

To drink the giraffe must take a very awkward and uncomfortable position; it must widen the front legs and bend the knees a little, once taken this strange position it can lower the neck until it reaches the surface of the water.

In addition to being an uncomfortable position, it is also dangerous for the giraffe because it makes it vulnerable to attacks by predators, in fact, bent that way to reach the water with its legs spread, it would not be able to escape quickly if a predator tried to attack it .

When a giraffe is drinking it is the best time for predators, both terrestrial and aquatic, to try an attack.

The neck of the giraffe so extraordinarily close to the ground is an invitation for lions who have a rare opportunity to hit the tallest animal in the world at the jugular, while for crocodiles it is the only time to try to catch it.

The crocodiles, that move silently and invisibly below the water level, get as close as possible to the giraffe and, when they are at a reasonable distance, attack trying to grasp the giraffe's muzzle, thus preventing it from taking the upright position, then it loses balance and drops forward into the water, where, at that point, it becomes an easy prey.

To avoid falling victim to fatal attacks, giraffes go to drink in groups and always take turns; while one giraffe drinks the others look around and check that there are no predators.

Fortunately, the giraffe is not strictly dependent on water, it can drink even once every few days, and this is because it manages to obtain most of the water it needs from the leaves of the plants it feeds on.

Especially during the rainy season, the giraffe manages to meet the water needs thanks to the particularly water-rich food, during the dry season however the situation changes and the giraffe must drink at least 40 liters of water about every three days.

Even in areas where water is present in abundance, giraffes do not drink regularly just to avoid being exposed to the risk of being preyed on.

Furthermore, the giraffe does not sit and does almost never lie down so as not to risk its own safety, in fact it would take too long to get up; the giraffe also gives birth and sleeps on its feet, making quick naps that last only 5 minutes, for a maximum of 30 minutes a day of sleep.

The giraffe, when it lowers to drink, is also exposed to another risk: the brain in fact, when the giraffe lowers towards the ground, risks being exposed to a sudden increase in blood pressure, that could cause a collapse and cause it to fall passed out on the ground.

To avoid this problem, nature has equipped the giraffe with an incredible internal structure, in its jugular veins there are some valves that block the return flow of the blood, also the blood vessels have elastic walls that dilate and shrink to manage the change blood flow; these one-way valves and the elasticity of the veins prevent blood from flowing too quickly to the brain when the giraffe lowers to drink.

A curiosity: NASA has conducted research on the blood vessels of giraffes to create spacesuits.

Another curiosity: despite its length, about 180 cm, the giraffe's neck has only seven vertebrae, the same number of vertebrae as a human neck and other mammals.

A final curiosity: the heart of the adult giraffe weighs 11 kilograms, it is the largest heart of any terrestrial mammal, the huge heart is used to pump 60 liters of blood per minute and must be strong enough to make the blood reach the brain that is at a considerable height, in order to be able to trace the blood along the neck, the heart develops a strong blood pressure, twice the pressure of an average human being. 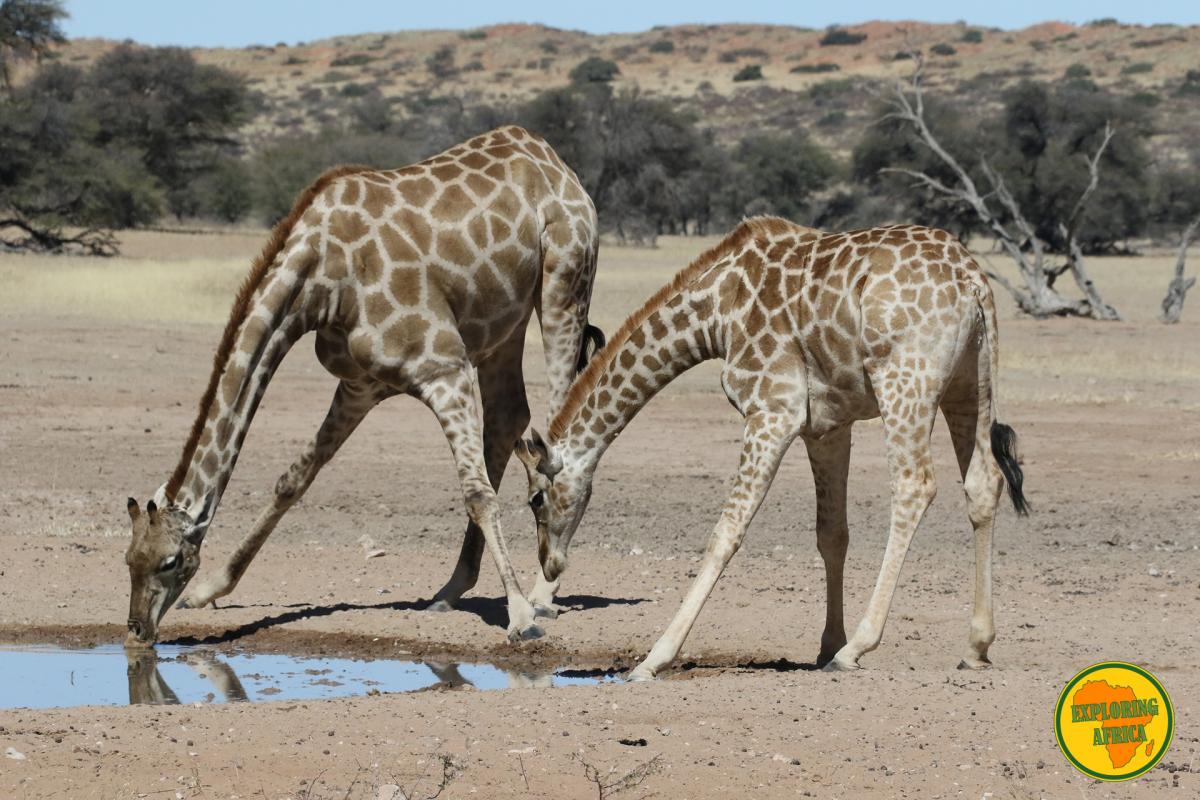 Did you know that drinking is dangerous for a giraffe?

Did you know that the giraffe's tongue is unique in the animal landscape?