The Nxai National Park is an area rich in avifauna, thanks also to the different types of habitats that lie there; here in total 217 species of birds have been recorded.

There are several bird species in the meadows, including ant-eating chats, white-browed sparrow weavers, capped wheatears, pale chanting  goshawks; while the white-browed robin, the Southern pied babbler and the chinspot batis can be seen in the acacia bushes.

The distinction between different habitats found in the park is reflected in the distribution of species of birds belonging to the same family, such as the double-banded courser and the Northern black korhaan, both species typically living in the Kalahari basin, are found only in the open grasslands, while the bronze-winged courser and the red-crested korhaan, that are very similar in appearance, are found only in the wooded areas.

In the Nxai National Park there are many species of birds such as the bateleur, the martial eagle, the tawny eagle and the brown snake eagle; during the summer months, from November to April, some migratory species add up, such as the steppe buzzard, the western red-footed kestrel, the yellow-billed kite and the lesser-spotted eagle.

The Kori bustard, the secretary bird and, during the summer months, the white stork hunt in the grass, while after heavy rains you can also see the wattled crane.

In the spring months, from September to November, it is the period of lark reproduction and their lures can be heard everywhere, some of the species present are: the Sabota lark, the rufous -naped lark, the red-capped lark, the fawn-colored lark, the dusky lark and the cape clapper lark.

During the summer months, when in the Nxai National Park there are wildebeest and zebra herds, there are also some species of birds that usually take advantage of herbivores, such as the carmine bee-eater and the blue-cheecked bee-eater feeding on insects that rise from the ground at the passage of a zebra or another animal.

There are also yellow-billed oxpeckers and red-billed oxpeckers, that can usually be seen on the backs of herbivores, such as zebras, giraffes or wildebeests, while they eat their parasites.

During this period, some vultures waiting to eat carcasses, such as the white-backed vulture and the lappet-faced vulture, can also be seen.

In this area there are also the shaft-tailed whydah and the paradise whydah, that have the peculiarity of being brood parasites of the waxbills; but, unlike the cukoos, brood parasites that eliminate puppies' eggs of the unaware hosts, the whydahs’ puppies grow along with the legitimate nest owners as if they were brothers.

The whydahs, in order to succeed in laying the eggs in the nest of the Estrildidae, implement a number of strategies to try to get their parents away from their nest; they also succeed in camouflaging their eggs, being able to produce them of the same color as the host species.

On the huge baobabs, present on those that, thousands of years ago, were islands of the large lake that existed in the Kalahari basin, nest, or just perch, many bird species including hornbills, rollers And owls. 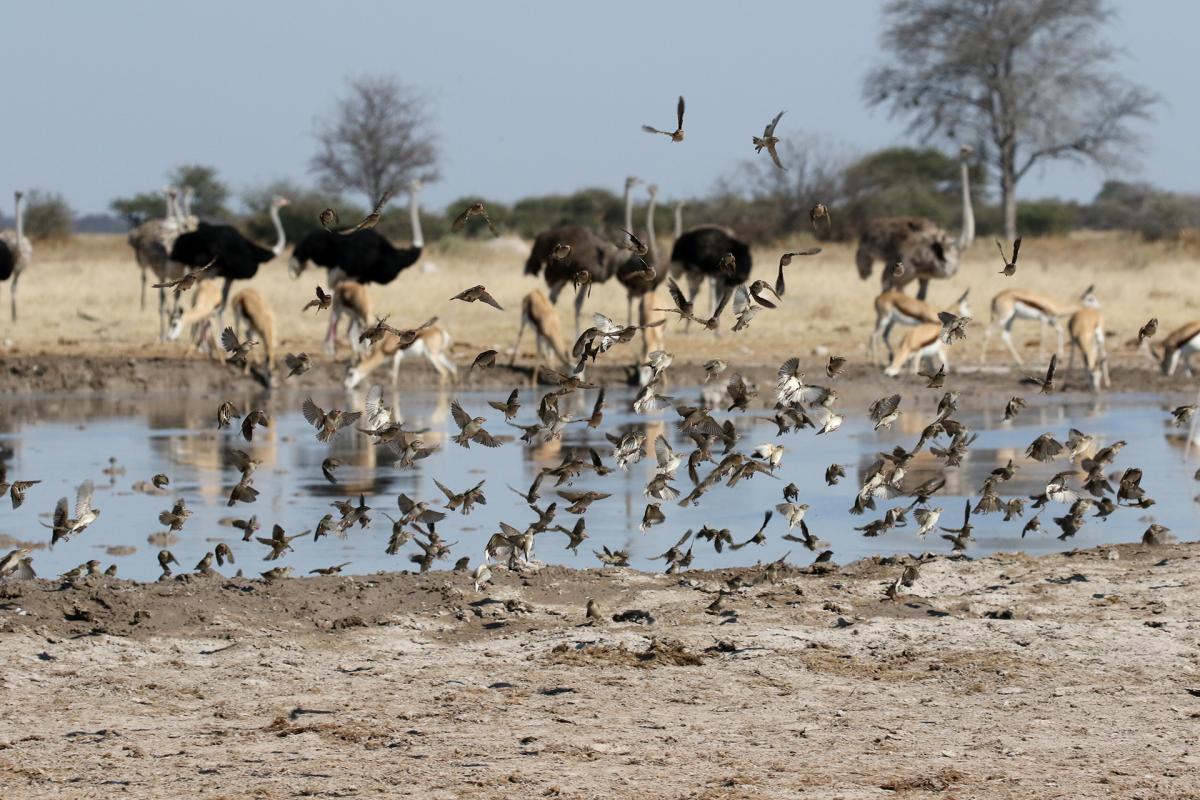