There are more than 400 species of birds in the Moremi Reserve, some of which are present everywhere in the reserve area, while others are present only in certain areas, according to the different habitats present in the Okavango Delta.

There are no bird species that are endemic to Botswana; despite this, the Okavango Delta is a huge marshland area, vital to many species.

For birdwatchers there is a list of "special sightings" that can be done in the Okavango Delta and in the Moremi Reserve, the first species of this list is definitely the slaty egret that can be seen in shallow waters in isolated areas with many cane thickets.

To identify it you must know that its plumage and beak are slate-colored, except in the area of ​​the throat where it is rufous red, instead the paws are yellow as well as the eyes.

In addition to the Okavango, this egret is also located in the quieter areas of the Chobe and Linyanti rivers and in the swamps of Bangweulu in Zambia.

Always part of this list, but a little easier to see, the magnificent wattled crane, that is usually seen in pairs or in groups moving around on the floodplains with low water or on wet grassy plains, looking for fish or small amphibians and small reptiles.

Other species for passionate birdwatchers are: the brown firefinch, the lesser jacana, the coucal or pheasant cuckoo, the coppery-tailed coucal, the Bradfield's hornbill, the pink-throated longclaw and the chirping cisticola.

The birds in the Khwai area, in the Mopane Tongue

In the area of Khwai, in the North of the Moremi Reserve, there is a huge variety of birds, also due to the fact that here are different habitats: river, marshes, floodplains, river forest, acacia bushes and the forest of mopane.

There are many species of aquatic birds such as marabou storks and saddle-billed storks, and here you can see the much sought-after wattled crane.

During the dry season, from June to October, there is a high concentration of predatory birds such as the martial eagle, that can be seen everywhere or the African marsh harrier, the bateleur eagle and the giant eagle owl or Verraux eagle owl.

The birds in the Xakanaxa area, in the Mopane Tongue

In the Xakanaxa area, there are many species of birds, especially aquatic species that can be seen in the lagoons and swamps that are present in this area.

The Dobetsaa Pans near Fourth Bridge, besides being very scenic, is a birdwatching paradise and it is one of the few places in the Moremi Reserve where you can see the African skimmer.

In this area you can take part in a mokoro or motorboat tour to see the water birds nesting on the islets of the delta.

In particular, in the Gcodikwe Lagoon, that can only be reached by boat, there are several islets that are important reproduction sites, called heronry, for many species of aquatic birds, especially for herons, egrets, goblins, storks, ibis, cormorants; these birds usually build their nests as of August and chicks usually are born in October and November, when the water level is low and it is easier to fish.

Marabou storks and saddle-billed storks instead prefer to make their big nests on the tree branches.

The birds in the South Gate area, in the Mopane Tongue

South Gate is located in a forest of tall mopane, where many squirrels and other small rodents live, so here are small predatory birds such as barn owls, small kestrels and small hawks; sometimes even a few specimens of martial eagle are seen.

In this area, two species of birds are very common, the first is the Arnot's chat, usually seen in pairs or in groups, on the ground or on small branches in search for small insects; some, because of his black and white plumage, call it "the small flying zebra"; the other common species is the red-billed hornbill, that here seems to be everywhere you look.

The birds in the Xigera area, on Chief Island

Here there are large marshy areas where many papyrus grow and islets; this is the paradise for aquatic birds.

One of the most important is the African skimmer that arrives in this area between September and October; it has a unique fishing method, it floats by immersing the tip of the lower jaw of the beak and, when intercepting a fish, quickly closes the beak by capturing it.

There are also several species of kingfisher, heron, egret and many others.

With a little luck you will also be able to see the American gallinule or purple gallinul), the lesser jacana, the common moorhen, the lesser moorhen, the green-backed heron, the little bittern and the dwarf bittern.

Other birds that could make the birdwatcher's happiness, and that can be spotted here, are the chirping cisticola, the tawny-flanked prinia, and the African palm swift

The birds in the Mombo and Chief areas, on Chief Island

There are large dry and flooded areas here, and this area is periodically visited by many species of birds, in fact all those present in the Okavango Delta.

In this area, more easily than elsewhere, vultures are noticed, thanks to the high presence of fauna, particularly the white-backed vulture, the lapped-faced vulture, the hooded vulture, the palm-nut vulture, the latter usually remains perched on the palm fronds, as it is also inferred from its name, but it is far more rare than other species.

Here are as well present the yellow-billed oxpecker and the red-billed oxpecker; the oxpeckers are usually leaned on the back of herbivores and eat their parasites.

There are also black herons with their unique fishing system, these birds walk in the low waters and usually widen their wings, forming a sort of umbrella around their neck; in this way, they turn away the sun's reflection from the water, allowing them to better see the fish, and on the other end, preventing the fish from seeing their movements while they are caught.
Wattled cranes can often be seen in groups in the low-lying herbaceous planks, while in the dry areas you can see the secretary bird and the Kori bustard; sometimes it is possible to see the colorful Southern carmine bee-eater that lies on the back of the Kori bustard instead of standing on the branches of the trees.

In the high grass planes you can see the African crane; while, throughout the island, ostriches are scarce, perhaps due to the high presence of predators. 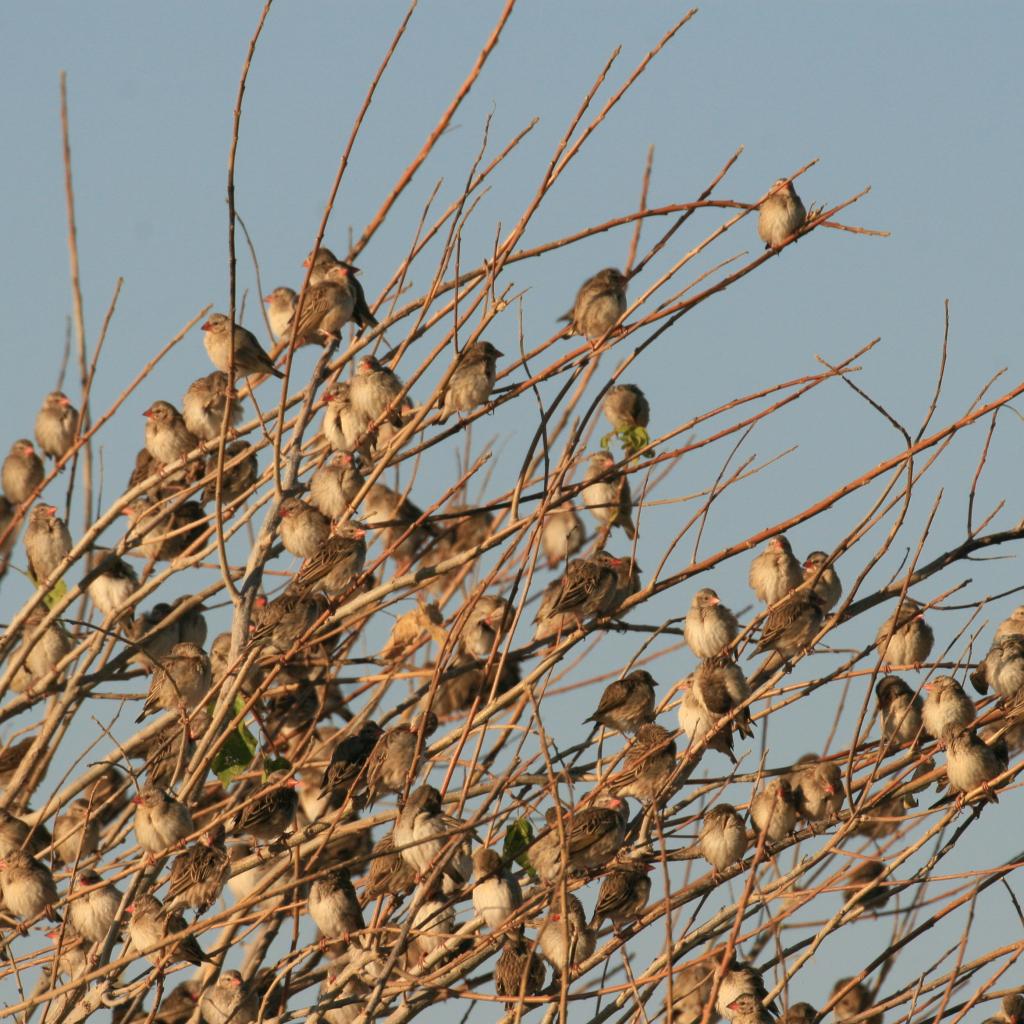 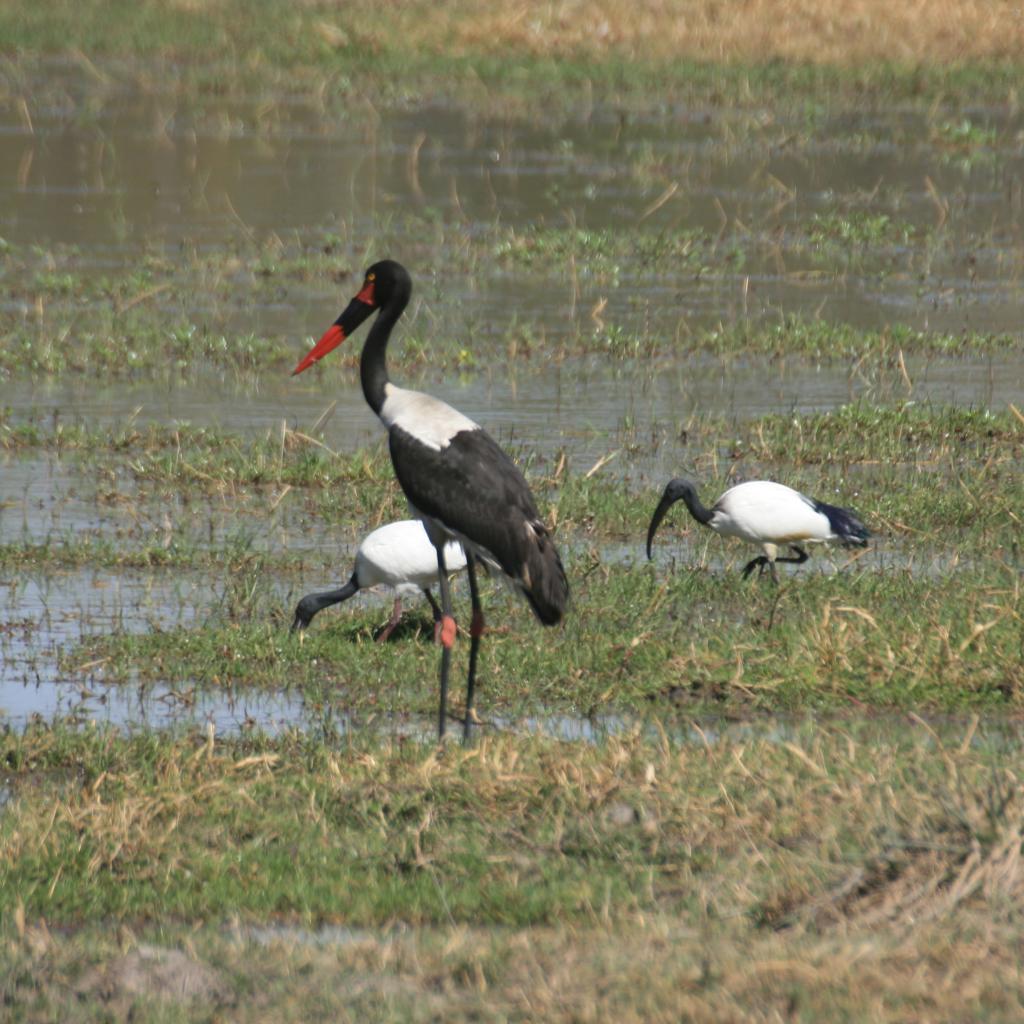 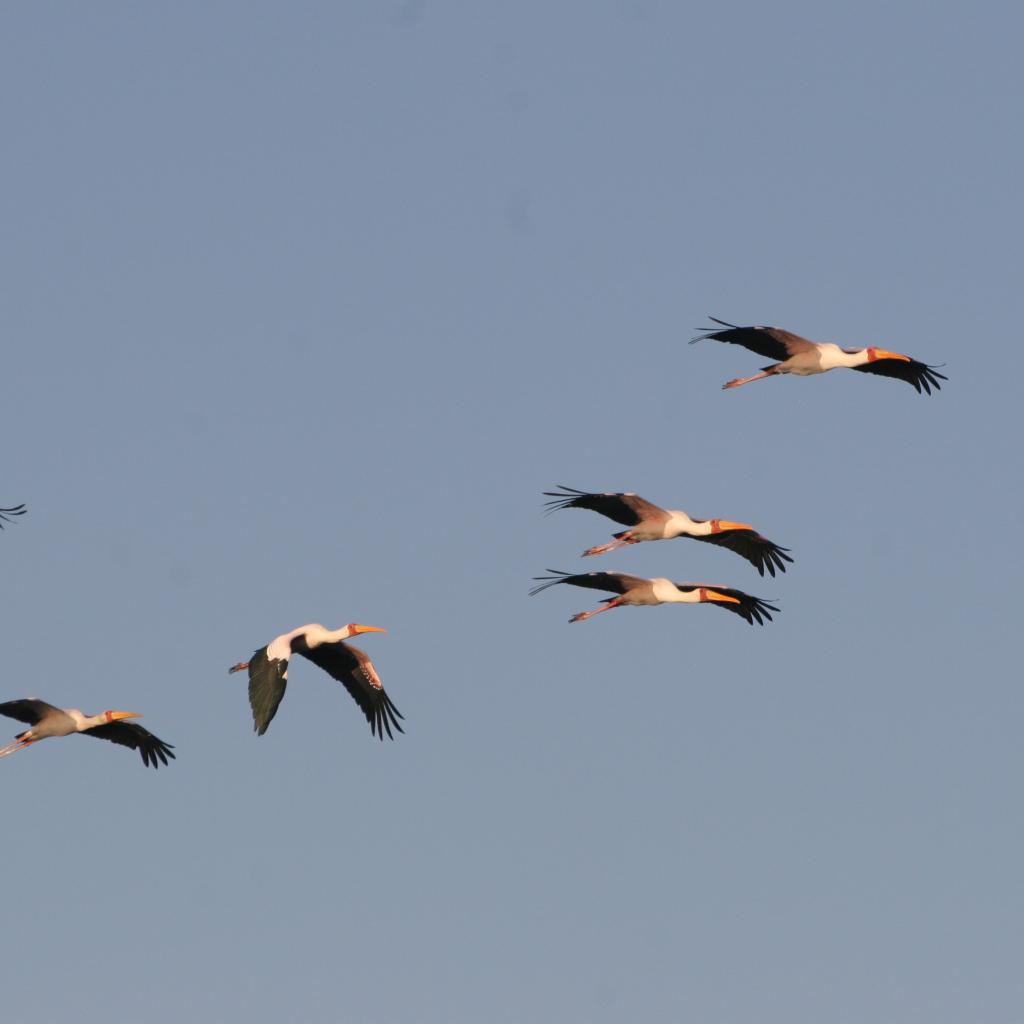