Deprecated: Array and string offset access syntax with curly braces is deprecated in /home/a41t7e0n/exploring-africa.com/sites/all/modules/entity_translation/includes/translation.handler.inc on line 1764
 The mammals of the Makgadikgadi Pans | Exploring Africa

The Makgadikgadi Pans are located in Botswana, in the Kalahari Basin, an area characterized by a semi-arid climate that, at first sight, can be inhospitable; while there are many animals that can live in these places, all year or for a certain period.

The remains and fossil finds, that were found in this area, testify that here, in the past, there was a huge lake, it is estimated that it had an area of ​​80,000 square kilometers, and that, consequently, there were many large mammals, such as elephants, rhinos and buffaloes; in fact, many traces of their presence in these lands have been found.

Following the drying up of the lake, more than 10,000 years ago, many animals almost totally abandoned these areas and moved to the Moremi Game Reserve area and the Chobe National Park, that lie further to the North and West.

For a long time rhinos had disappeared from the Makgadikgadi Pans, not only as a result of habitat change, but also due to poaching; today, after they have been reintroduced in the Okavango Delta, there are some in the Boteti River area, but it is really difficult to spot them.

Even elephants and buffaloes sometimes venture into the Westernmost part of the Pans, where they find more vegetation and water, but they are usually few specimens, compared to those that are sighted in other areas of Botswana, where the water is more abundant and permanent.

The prairies, that are located near the salt stretches, during the rainy season, attract a large number of herbivores, especially zebras and wildebeests; these animals come from the Boteti River banks, from the Okavango Delta and the Chobe River, where they had concentrated during the dry season, passing through the Nxai Pans National Park.

In fact, in these lands the second largest migration of the African continent takes place, after the Great Migration of the Serengeti National Park; tens of thousands of herbivores that, following the rains and the availability of water, move constantly, looking for better pastures; they are mainly zebras and wildebeests, but also elands, some oryxes and the hartebeests.

The springboks manage to live in arid environments and therefore remain in the grasslands all year round, even when the drought, during the dry season, has yellowed the grass and dried up the water.

Kudus, impalas, sables, steenboks and tsessebes are also resistant to drought so it is possible to meet them in the Makgadikgadi Pans all year round, especially in the mopane forests area in the Nxai Pans National Park; here are also several giraffes, here you can also find some elephants.

At the Boteti River, where there is a dense bush, are the bushbucks, the gray duikers and the waterbucks; the giraffes and elephants also visit this area, while the hippos are found in the river.

Many predators are wandering furtive around in the region: the lions usually follow their prey and their movements, in particular the zebras in the area near the Boteti River and the spingboks in the Nxai Pans National Park, but sometimes they venture into the salt depression; the cheetahs are usually found in the Nxai Pan area, while leopards are more frequent in the wooded area, that lies along the Boteti River banks.

As for the two species of hyenas found here, the spotted hyenas are usually found on the edge of the wooded areas, while the brown hyenas are found almost everywhere, even in the salt fields, as they are animals that adapt to live in arid and semi-arid areas.

Near the Nxai Pan there is the possibility of spotting wild dogs as well, although you must be particularly lucky, as these animals move continuously, covering many kilometers every day.

There are also several species of small predatory mammals such as the bat-eared foxes, the black-backed jackals, the aardwolves, the honey badgers, the African wildcats, the genets and the polecats.

Here are also some mongooses, such as the yellow mongoose, that is common in grassy prairies, and the slender mangoose, that instead prefers areas of acacia bushes.

The Makgadikgadi Pans are not an area typically inhabited by monkeys, because there are no trees, especially those that produce fruit, except the area along the Boteti River, where you can find baboons and vervet monkeys; throughout the region instead are the bush babies, that feed on insects and resin of the acacias, present in the prairies.

Other mammals present in the Pan are the ubiquitous aardvarks and the porcupines; even the springhares are particularly abundant.

Many rodents build their burrows in the ground tunnels and come out during the night, when the temperature is lower, such as, for example, the Damara mole-rat, the gerbil and the black-tailed tree rat that, during the day, hides from high temperatures, in the holes of the trees protecting the entrance with a tangle of twigs.

The only rodent that is active during the day is the ground squirrel that can protect itself from the sun using its huge tail like a parasol. 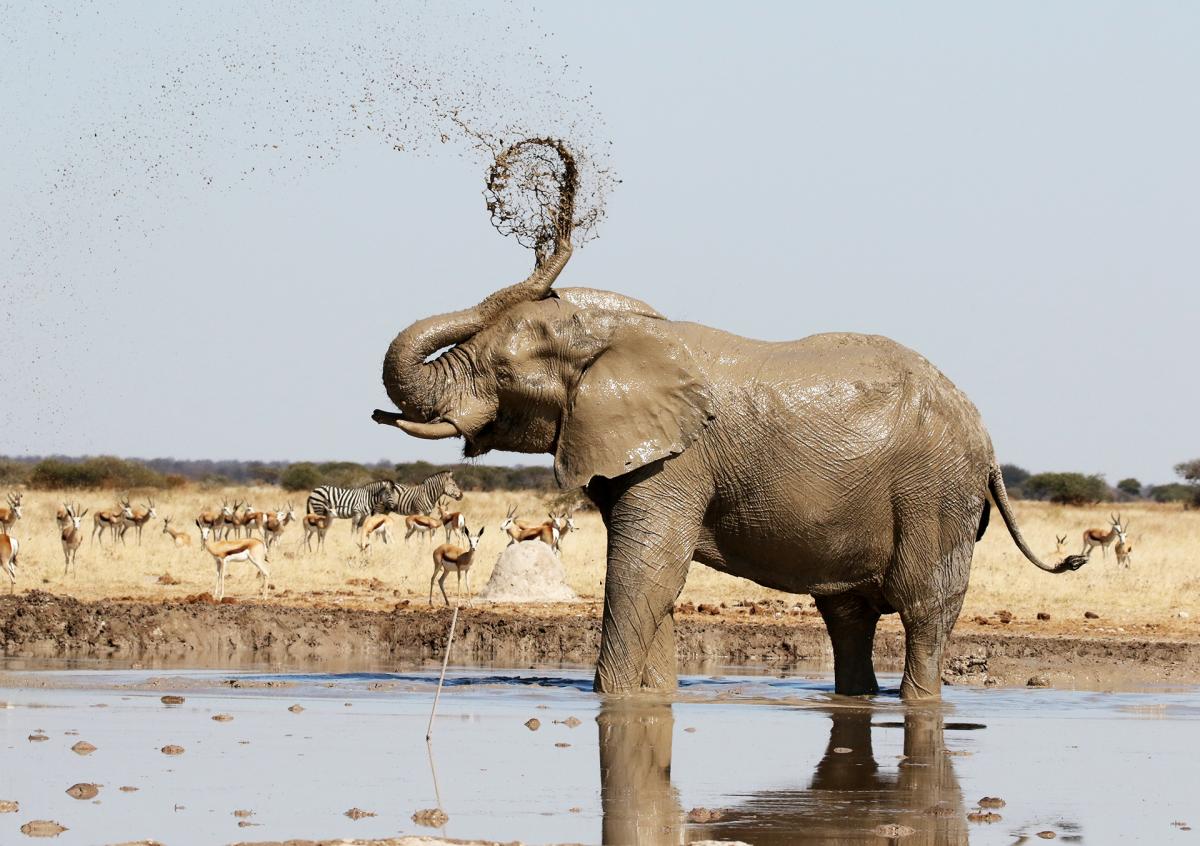