The Makgadikgadi Pans are located in Botswana and, as a whole, cover an area of ​​16,000 square kilometers, and this means that this is the largest salt depression on the planet; the biggest Pan are the Sua Pan, the Ntwetwe Pan and the Nxai Pan that, in turn, are surrounded by a myriad of smaller pans.

This huge territory, that contains several salt depressions, in prehistoric times was the basin of an immense lake, that is estimated to have covered an area of ​​80,000 square kilometers.

Following some telluric movements, the lake has dried up more than 10,000 years ago, as it has lost some main tributaries, that have deviated their course; now the lake is partially filled with water only during the rainy season, if these are abundant, creating a shallow mirror of salt water.

In several places of the Makgadikgadi Pans are still visible signs of the ancient Makgadikgadi Lake that once stood in this part of the Kalahari Basin; it is possible to see, mainly in the Southern part of the Pans, a slope where the signs of erosion, made by the waves of the lake, are still evident; also on the ancient beaches of the islands of the Sua Pan, such as Kubu Island and Kukome Island, there are clear signs of the presence of water: here are in fact the fossil pebbles that have been rounded by the wave, there are also diatom fossil remains and aquatic animals.

At Kubu Island, a granite island in the Sua Pan, some tools dating back to the Stone Age have been found, a sign that the island was inhabited at that time, and what remains of a stone building is also present, that was probably built by the Kingdom of Great Zimbabwe, perhaps Kubu Island was the South-Western boundary of this empire.

On Kubu Island and Kukome Island, always in the Sua Pan, stand out, in all their magnificence, the majestic baobabs, that we estimate have from 3,000 to 4,000 years; they are beautiful and imposing, silent witnesses to the geological and climatic changes of this region.

In the Ntwetwe Pan there are some islands that have a different origin, once they were sand dunes, that later, over the centuries, became fossilized; the vegetation that grows on these islands is completely different.

While we find the millennial baobabs in the Northern part of the Ntwetwe Pan; these were once used as a point of reference for the explorers, to orient themselves in this immense place.

Also the Nxai Pan and the Kudiakam Pan are part of this immense complex; here most of the pans are now covered with grassland, where the migration of zebras and wildebeests is concentrated, during the rainy season, but there are still some parts of the salt surface, like that of the Kudiakam Pan, where the famous Baobabs of Baines are found, they take their name from the artist and explorer, who painted them during his journey.

In addition to the baobabs, many other species of plants survive in such an inhospitable environment; there are several habitats, from the arid expanse of salt, where no plant is able to survive, to the grasslands, to the areas of acacia bushes, up to the river forest and the aquatic plants that are located on the banks of the Boteti River that , for a few years, after a period of shoal, returned to flow.

Even some animals have adapted to live here, in this arid place, such as the brown hyenas, the oryxes, the hartebeests, the kudus, the giraffes, the springboks, the steenboks, the aardvarks, the lions, the leopards, some species of antelopes, different insects and arachnids and also amphibians and reptiles and, of course, many birds, some of them are resident, others migrate here during the rainy season.

The National Parks and the protected areas of the Makgadikgadi Pans

Within the Makgadikgadi Pans area there are two national parks, a sanctuary and a national monument.

The Nxai Pan National Park occupies the Northernmost part of the Makgadikgadi Pans, where the Nxai Pan, the Kudiakam Pan and the famous Baobabs of Baines are located.

Here, during the rainy season, the herds of the second largest Migration of the African continent are concentrated, after the Great Migration of the Serengeti; in this period it is very difficult to drive in the park, because the roads are unpaved and, with the rains, they turn into mud.

During the dry season it is much easier to drive, even if you need a little practice driving on the sand; in this period the herds have left this area to look for water elsewhere, here is still present an artificial pool where it is possible to make excellent sightings.

This park contains inside different habitats, from the expanses of salt to the river forest; here, during the dry season, especially along the banks of the Boteti River, the herds of the Migration are concentrated, since this is the only available and certain source of water.

The dry season, from June to October, is the best time to visit this park if you want to admire the herds and predators that, inevitably, try to hunt; also during this period it is possible to admire the desolate white expanse of salt of the Ntwetwe Pan, this is also the period in which it is easier to drive inside the park.

While for birdwatchers, the best time is during the rainy season, from December to April, when, in addition to the resident birds, there are also those who migrate here from other parts of Africa or from the Northern Hemisphere.

The Nata Bird Sanctuary is located in the North-Eastern part of the Sua Pan and during the rainy season, when the Nata river pours its waters into the pan, it becomes a paradise for birds, especially for the aquatic ones.

In particularly rainy years, tens, if not hundreds, of thousands of flamingos gather here to mate and to nest and grow their chicks; this is one of the most important places in the world for the survival of the lesser pink flamingos and the greater pink flamingos.

Kubu Island, for its historical and naturalistic importance, has been declared a national monument, this ancient island is a desolate and lost place in the immensity of the Sua Pan, the silence here is absolute.

Stone Age tools have been found here, fossil remains are a sign of the existence of the ancient Makgadikgadi Lake, part of a Great Zimbabwe building. Also, on the granite rocks, there is fossil guano, a sign that, when there was the lake, the waterfowls came here to nidify, and finally the majestic, gnarled and thousand-year-old baobabs that rise above this granite outcrop.

To reach Kubu Island, and also to move around in the Pans, there are few well-marked tracks, sometimes you can only glimpse the signs of a car's tires; it is essential to have a navigation system that has all the tracks, even secondary ones. 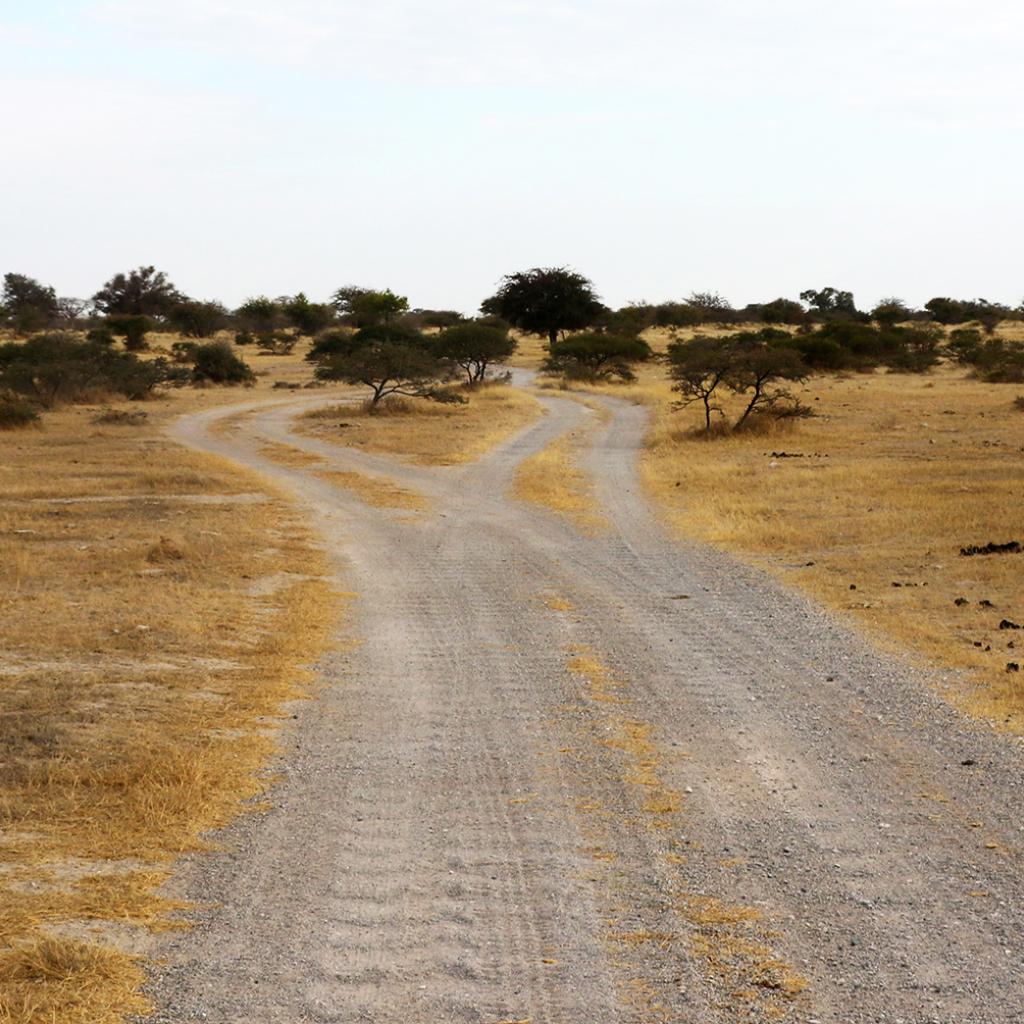