This area is located in the extreme North of the Moremi Reserve and corresponds to the wider section North of the entire Okavango Delta, that gradually moving Eastward creates the Khwai River.

The paths that run along the river and around the alluvial plain are spectacular, and there are many animals here; it is also a wonderful area, especially for those travelers who come here from other dusty parts of Botswana during the dry season, such as from the center of the Chobe National Park or the Central Kalahari or even from the salty plains of Makgadikgadi and Nxai.

It is not difficult to navigate in this area of the ​​Mopane Tongue also thanks to the opening of a new track that leads here from the North Gate.

The Okavango waters come from the West and enter the Khwai River and create on the shores alluvial plains, bights, meanders and lagoons; continuing instead, the river bed becomes narrower and its waters remain concentrated in this small canal.

At the center of this area is the bridge at the North Gate, commonly called Khwai; the bridge is located right on the river Khwai, the South bank of the river lies in the Moremi Reserve, while on the North shore is the small village of Khwai, here is the local community that controls the NG18 and NG19 concessions, here is also located the landing track

In this area, along the course of the Khwai River, there are beautiful and ancient river forests; here are many tall and old trees, including some Acacia erioloba or camel-thorn acacias, known by some as "acacia of the giraffes", as it is one of their favorite, and some lonely Combretum imberbe or leadwoods.

In the vicinity of the sandy soil, that lies between the river and the mopane forest, located in the inner part of the peninsula, there are some acacia groves.

This area of ​​the Moremi Reserve offers remarkable sightings especially during the dry season, ie between June and October, since it is lapped by the waters of the Okavango River, that in this time of the year brings its flood to the Delta; as a result, there is plenty of water for fauna, so at this time, thirsty animals come here from the South of the Chobe, where water reserves are scarce, especially at the end of the dry season.

This is a good area for the sighting of leopards resting in the shade of some trees during the day, especially in the forest along the river; moreover, this is the territory of a large number of lions that has become famous because, thanks to its size, it is capable of hunting medium-sized elephants, even though sighting such an event is rather rare.

Always along the river, often the wild dogs dig their nests in the ground when they have the puppies, so you have a higher chance of seeing them than elsewhere, as they usually, even though they move away from the nest, do not move many miles as they usually do when they have no puppies to wean.

In addition to the predators here, there are several herbivores including elephants, buffalos, impalas, kudus, waterbucks and you have good chances to see the elusive roan.

Khwai is also an excellent place for birdwatchers, especially during the dry season, here are several storks such as the saddle-billed stork and the marabou stork, and you can also see the rare wattled crane while it walks back and forth in the low waters in search for fish, frogs and reptiles for food; there are also several species of bee-eater, kingfishers and many other birds.

Especially at the end of the dry season, so in September and October, this is a favorite place for birdwatchers for its high concentration of predatory birds; you can easily see the martial eagle, the African marsh harrier, the bateleur eagle and the Verraux or giant eagle-owl. Driving along the tracks it is good to look carefully at the branches of the trees in search for some predatory bird perched.

On the other side of the Khwai River there are two concessions: the small NG19 and the largest NG18, here are the majority of the lodges in the area, these are located along the river and lead their safaris along the North bank of the Khwai River or some, occasionally, bring their guests to the Moremi Reserve.

A very beautiful trail is about 14km West of the North Gate, where the signage "hippo pool" leads to a large, shallow lake, where the hippos are covered in these permanent waters; here is also a platform for observing the birds, especially the aquatic species that are found in this area.

On the North shore, unlike the Moremi Reserve where it is forbidden, it is possible to take safaris on foot and night safaris.

These camps do not organize boat safaris because the waters of the Khwai River are not deep enough to allow them.

The state-run campsite is located instead inside the Moremi Reserve, near the North Gate and the bridge. 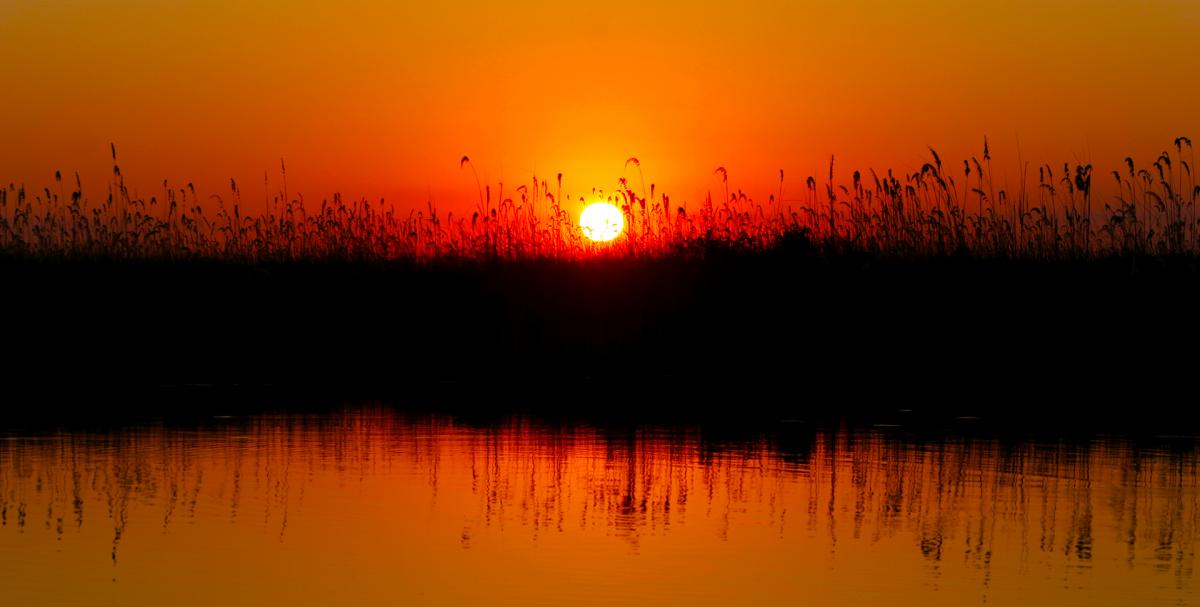