The liana bridges on the Cavally River

We are at Man in the Ivory Coast, today is dedicated to the exploration of the surroundings, we will also see a dance by the Guéré.

After breakfast we leave to the West, towards the border with Liberia; the road is not the best, it is full of holes that, probably, were formed by rains.

There is nothing along the way, apart from some villages and lush vegetation; it takes about 2 hours to reach the town of Danane, that is about 80 km from Man. 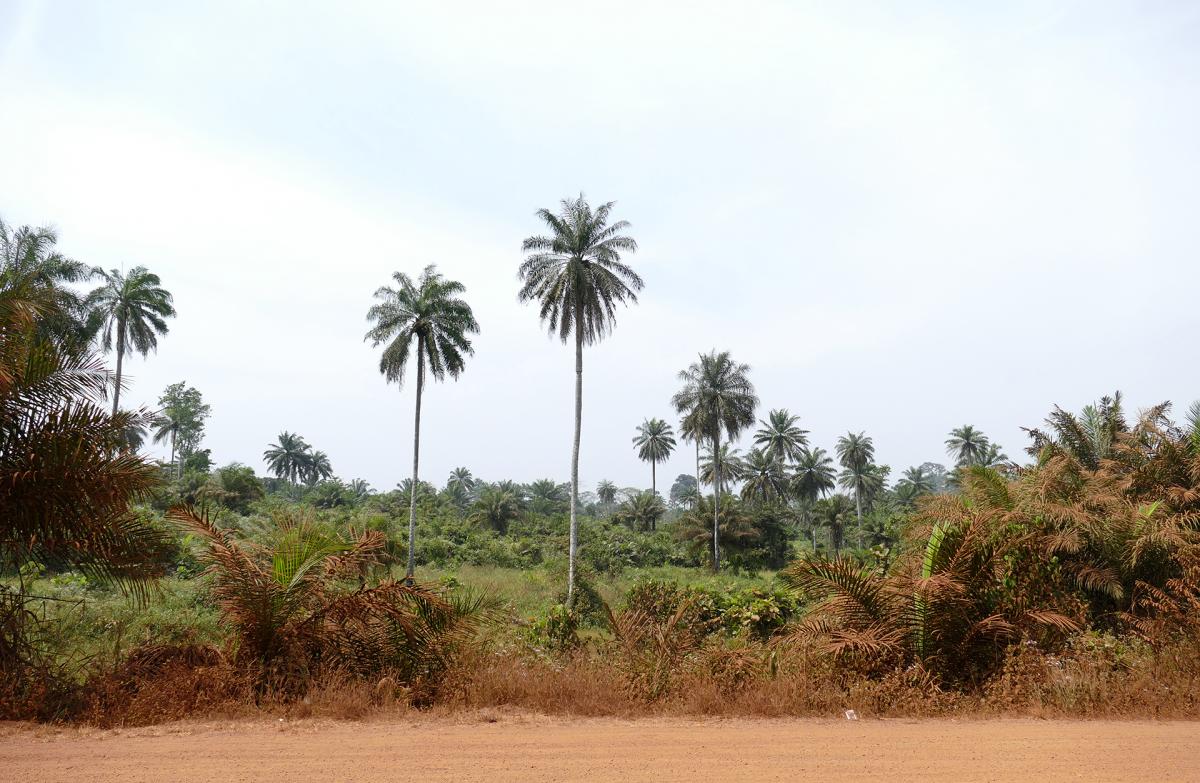 Danane is little more than a village, here is a very lively local market, probably people come here from the nearby villages and from across the border; in fact, we see several collective minibuses that are going to the capital of Liberia, Monrovia, overloaded with people and goods.

After passing Danane we take a dirt road, it is narrow and immersed in the vegetation; it's gorgeous.

Shortly after we arrive at the village of Vatuo and get off the car; in a moment we are surrounded by children and women who ask for photos, who look at us and approach to touch us, I know that in these parts they see very few tourists. 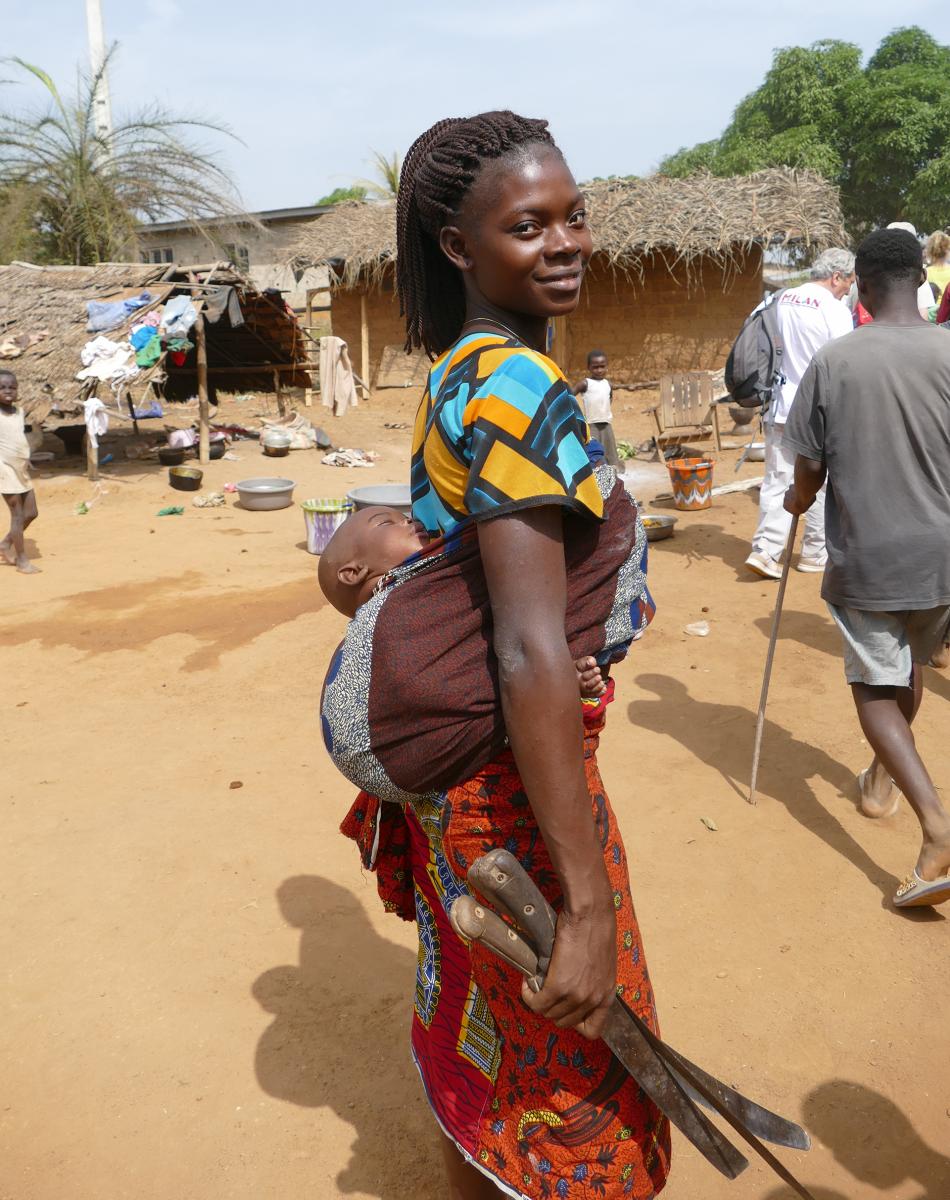 We cross the village and, as we proceed, the people who follow us increase, it is a real assault; they are simply curious, someone tries to chat, but few speak French and very few English, only a few children who go to school here.

We arrive on the bank of the Cavally river, this river is renowned because, to connect the two sides, a series of lianas bridges have been built.

These lianas bridges are considered sacred by the Yacuba, the legend tells that the initiates go to the forest and, for a week, collect the lianas necessary to build the bridge, then, in a single night, the spirit builds the bridge using those lianas . 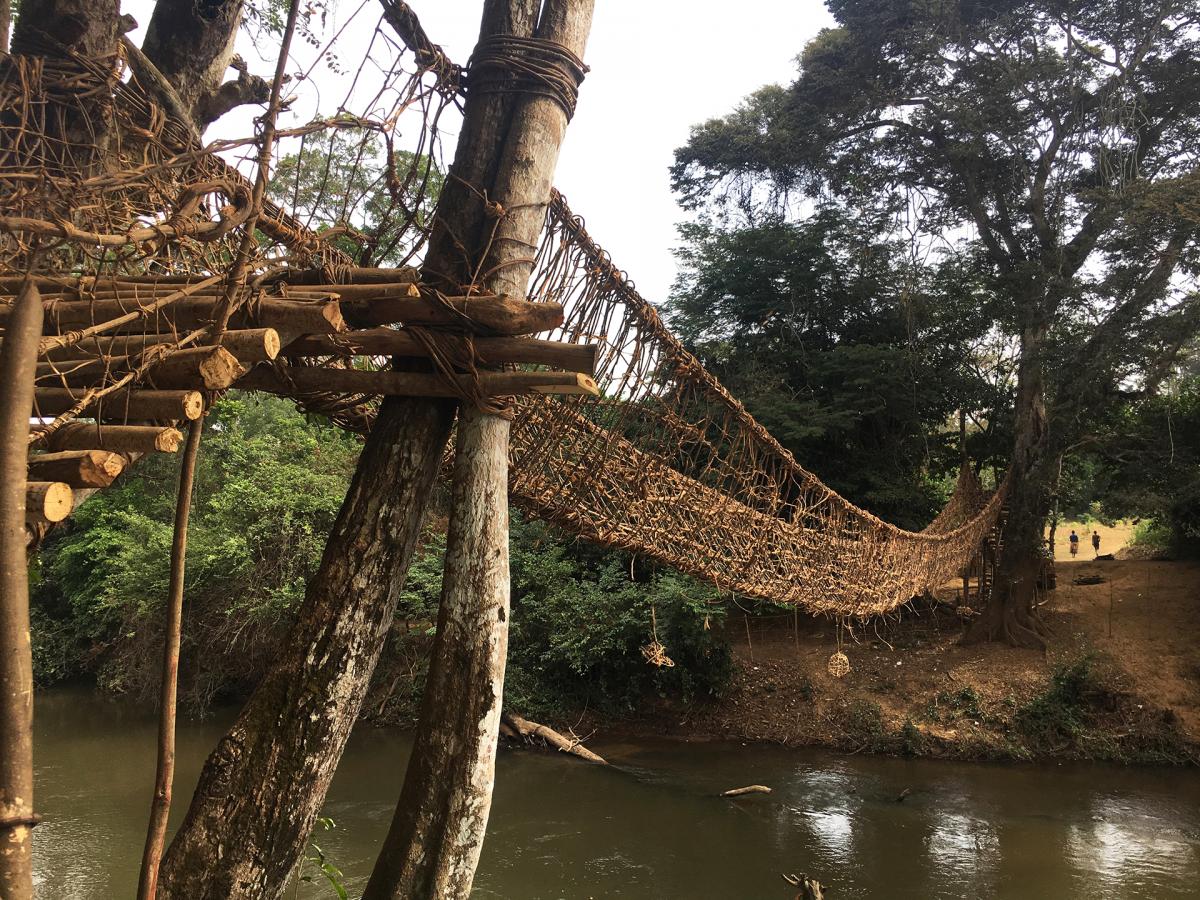 In this village there is one of the few lianas bridges that survived the floods that were here during the last rainy season; the river is about 15 meters wide and the bridge connects the two banks.

The bridge does not start at the level of the sandy shore, otherwise it would risk ending up in the water in the central part, where the bridge, under the weight of the passers-by and flexuosity of the lianas, is curved downwards; therefore a wooden staircase was built, on top of which the bridge is connected.

The bridge is considered sacred, just because it was built by the spirit, so you have to go barefoot and without chewing-gum.

They walk the bridge, from one bank to the other, with a certain nonchalance, women also carry weights on their heads or children on their backs; but in reality it is anything but easy. 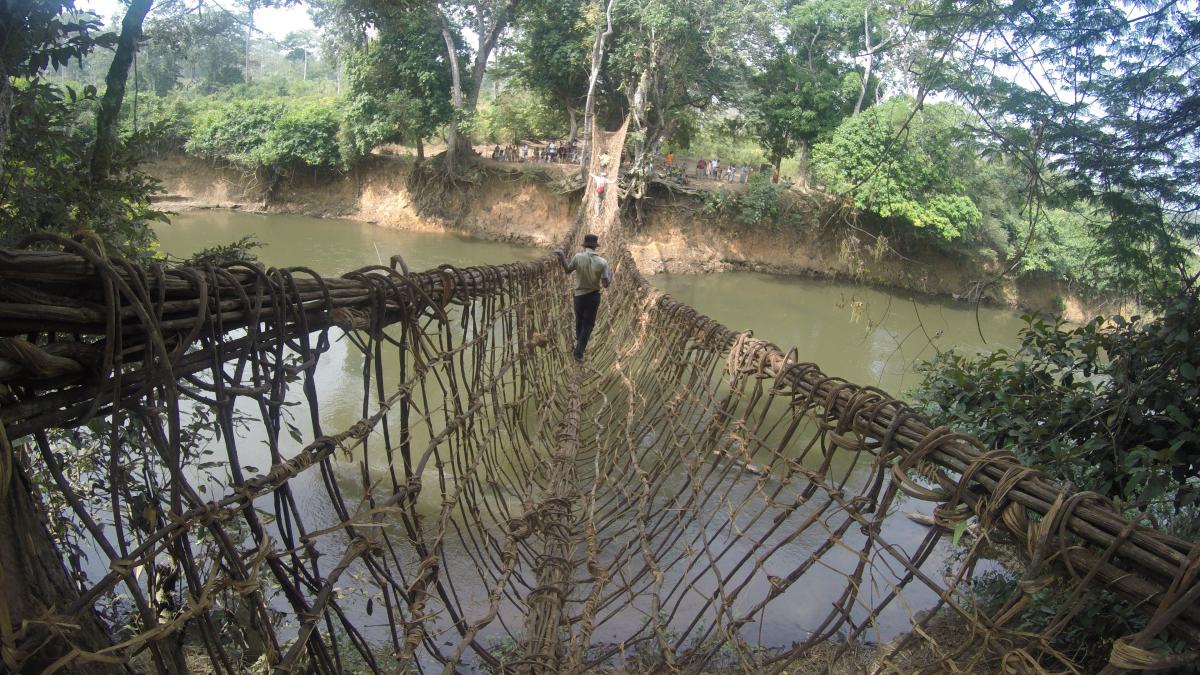 First of all we, unlike them, we are not used to walking barefoot and, both the wood of the staircase and the lianas, are hard, rough and gnarled, moreover the bridge at every step fluctuates, the walkable surface is really narrow and the walls are partially open.

I decide to stay on the shore to take photographs, while Silvan leaves for the adventure; while he slowly reaches the other side of the river, I take photos both of him and of the children and the women who ran there looking at us, we are not the only visitors to the village and some cross the bridge, while others don’t like me .

When all the adventurers return and put on their shoes, we are ready to go; but, once we reach the village houses, they let us sit on a veranda. 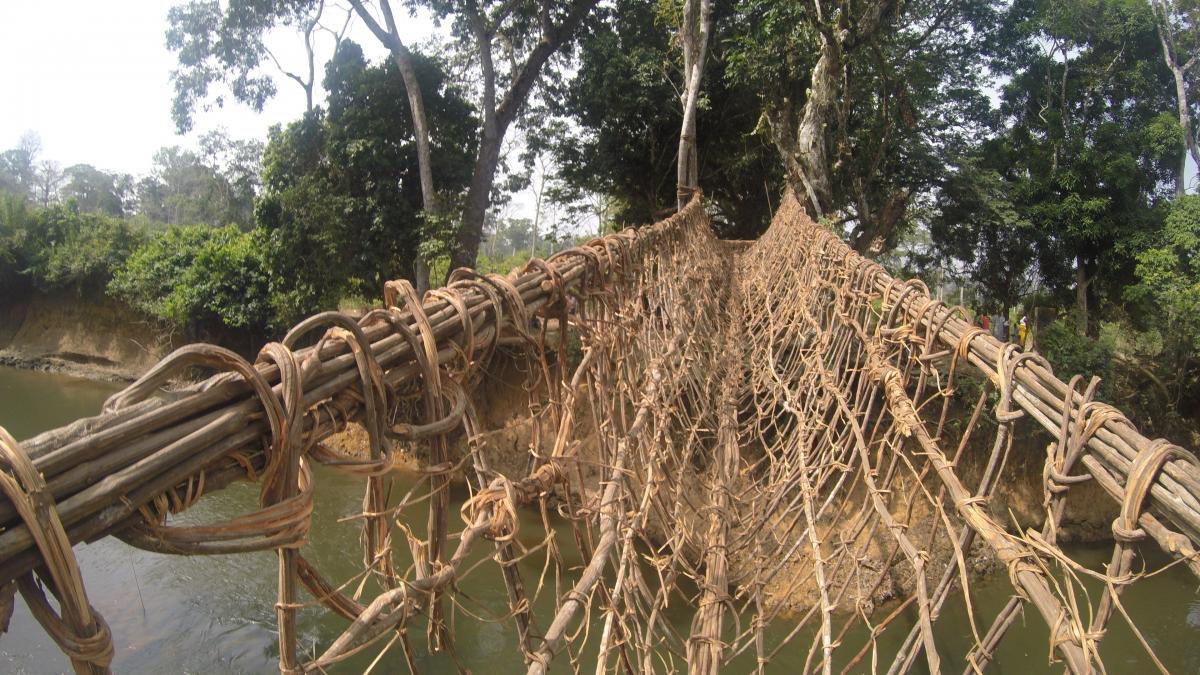 That is the house of the Chief of the bridge, he is responsible for the bridge, its maintenance and its sacredness.

Initially we did not understand why we were there, we thought it was a gesture of hospitality or that they wanted to tell us something else about their traditions; but our guide tells us that some of the guests have committed a sacrilege and climbed on the bridge with their shoes.

Obviously it was not us, we are very respectful of the traditions and beliefs of others, it was some of the other tourists, but the Chief of the Bridge and the Chief of the Village have considered necessary to stop everyone to discuss the incident. 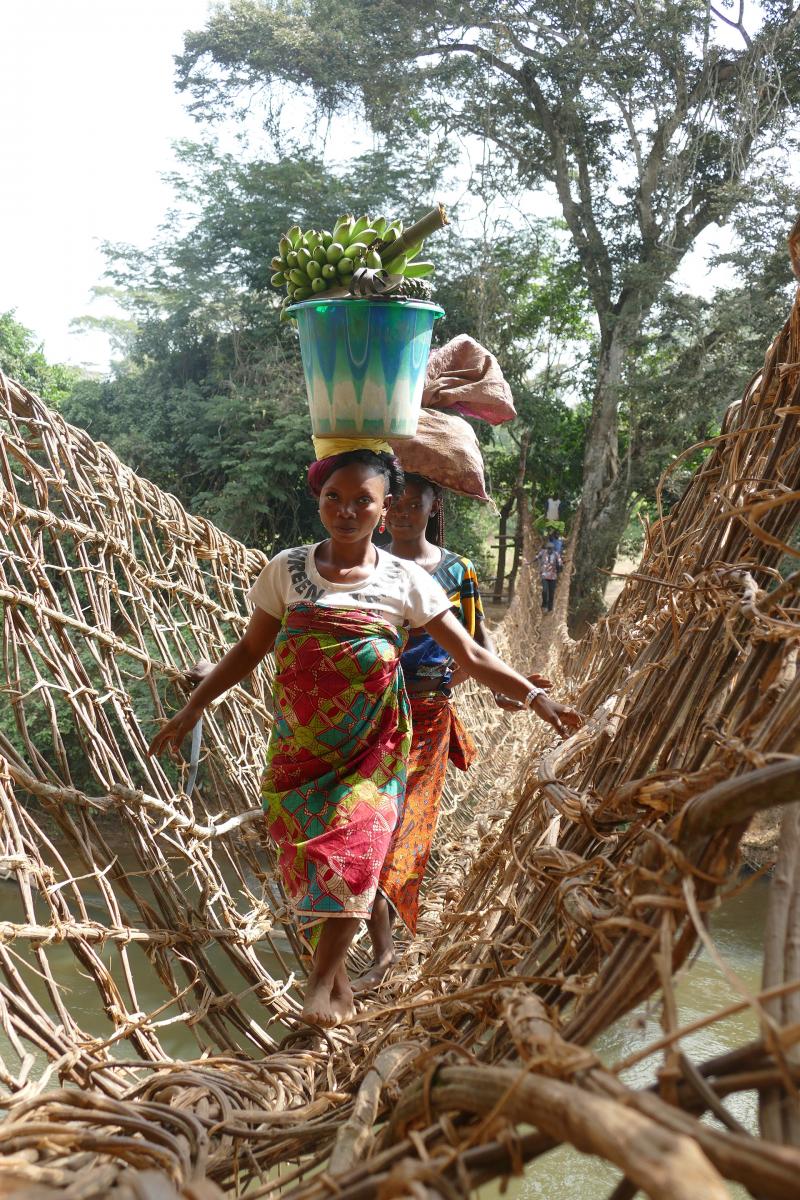 The whole village has gathered to assist, for us it may seem a bit of an absurdity, but for them it is very serious and bad, so they are arguing heatedly; in reality it is as if an individual were to enter our church and commit an obscene act.

Initially they tell us that those who have committed the sacrilege must leave the incriminated shoes to the village then their guide manages to deal and eventually pay a fine of 10,000 CFA, about 15 €, that for us is nothing but for them it is a lot of money.

The offending tourists apologize to us for the incident, but actually we enjoyed watching the process, it was also very interesting, even if it lasted almost an hour.

We go back to our car and return to Man, we have lunch at the hotel and relax a bit at the pool until, in the late afternoon, we'll go out again. 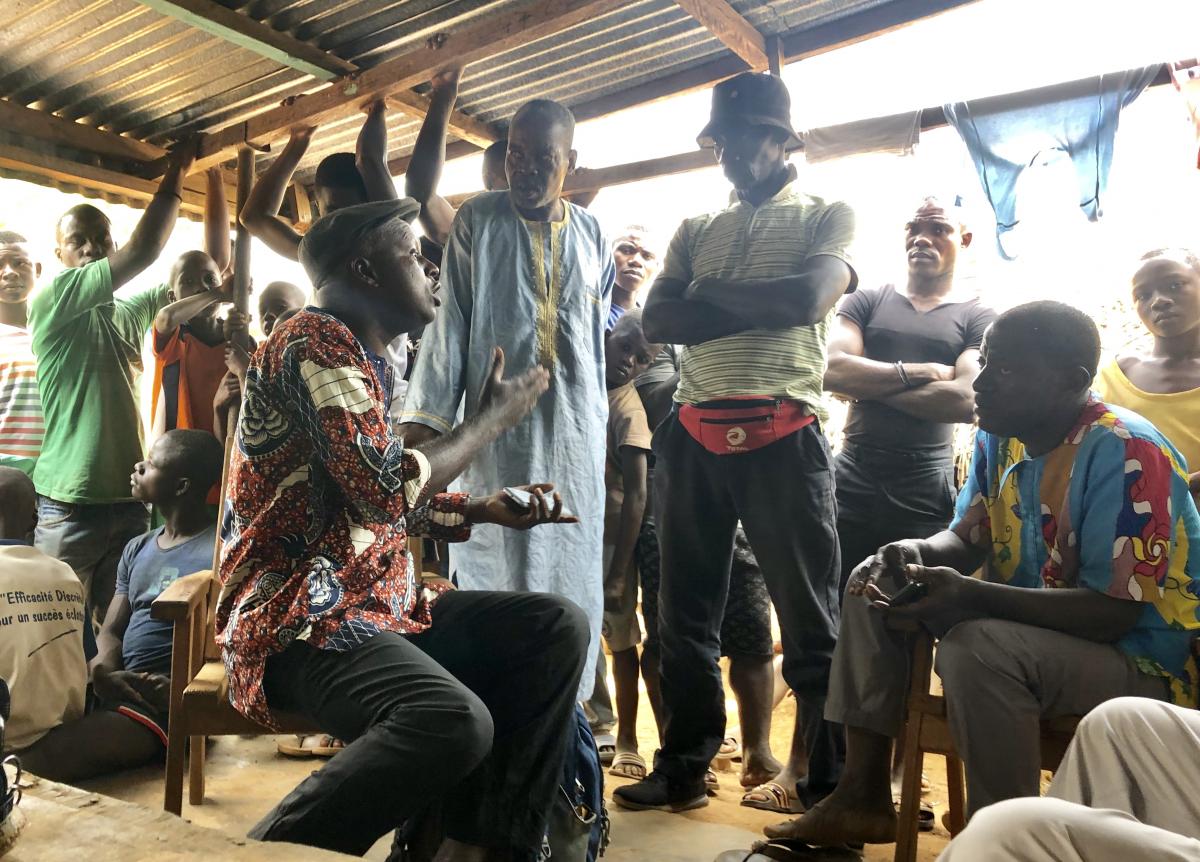 Related:
The Ivory Coast is the heart of West Africa