The Kgalagadi Transfrontier Park: from Twee Rivieren towards the North

The nights in the Kgalagadi Park at this time of the year are cool but they are forgiven by giving you an amazing starry sky.

The alarm clock rings early today as well, very early, we want to take full advantage of the time available and the early hours of the morning are the best to watch animals because they are more active, the central hours of the day are too hot and especially the felines tend to sleep in the shade.

We begin well by seeing a beautiful example of pale chanting goshawk and a rare lanner falcon.

We follow a herd of wildebeests and this makes us go wrong, we end up in the Botswana park area, we drive for a few kilometers but then come back to South Africa, today we want to explore the Eastern part of the park up the road leading to Nossob. 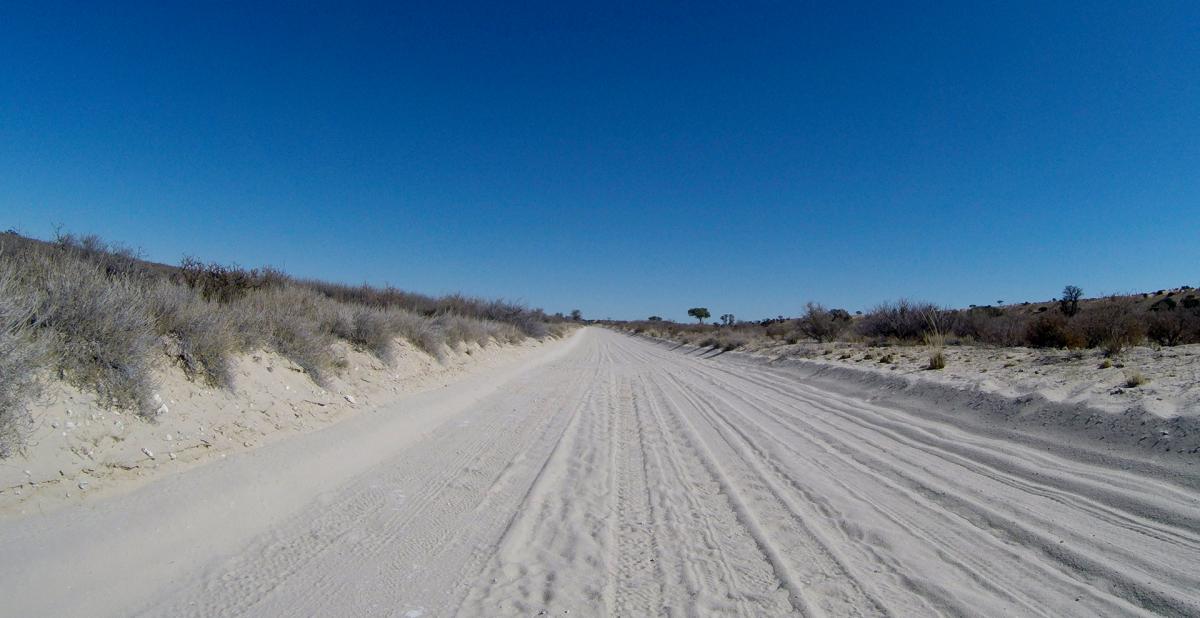 We see hundreds of gemboks, springboks, many ostriches, but also some elands and black-backed jackals.

A pair of flying secretary birds attracts our attention, we watch them land and start hunting, these big birds hunt down to the ground running for up to 20 kilometers a day; they kill the prey before stunning it with their mighty feet and then with the sharp and pointed beak.

Contrary to what their name suggests, they do not feed on snakes, or rather, they hunt mainly lizards, insects and small rodents.

We go up the road following the Nossob River Trail, this season there is no water and the valley flowing among the dunes is a dry plain with yellow grass. 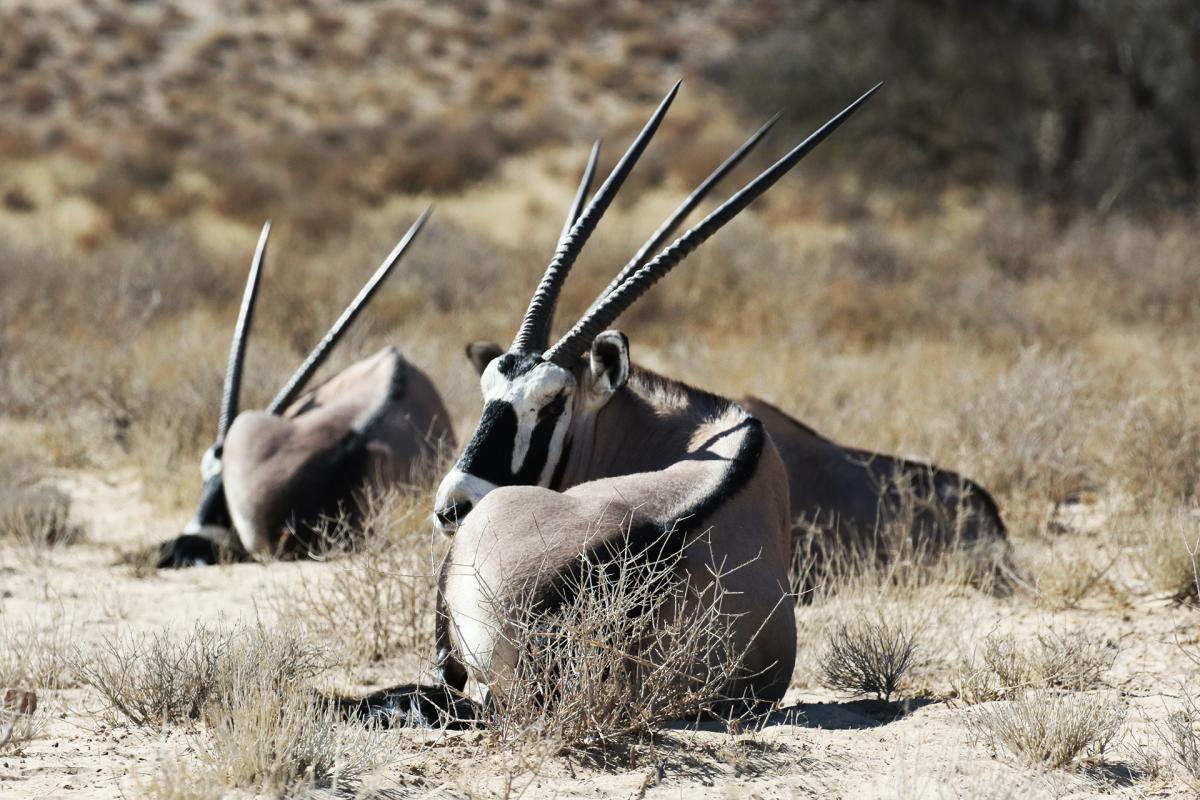 The dunes around are not very high and are made of sand that has different shades of color, from yellow to intense orange; they are partly covered with shrubs and dried grass.

We go North for several kilometers but this morning it seems that the savannah does not want to reveal its beauties, at the waterholes on the road we find just springboks and gemboks, but as it often happens, when you least expect it there is the turning point.

We stop for lunch in a picnic area, where there are some stone tables and bathrooms, it is in a slightly elevated position compared to the road and compared to the bed of the Nossob River; from that privileged position we see five cheetahs who are moving from their shadowy position under a small tree and begin to walk, heading towards the dunes to the North-East. 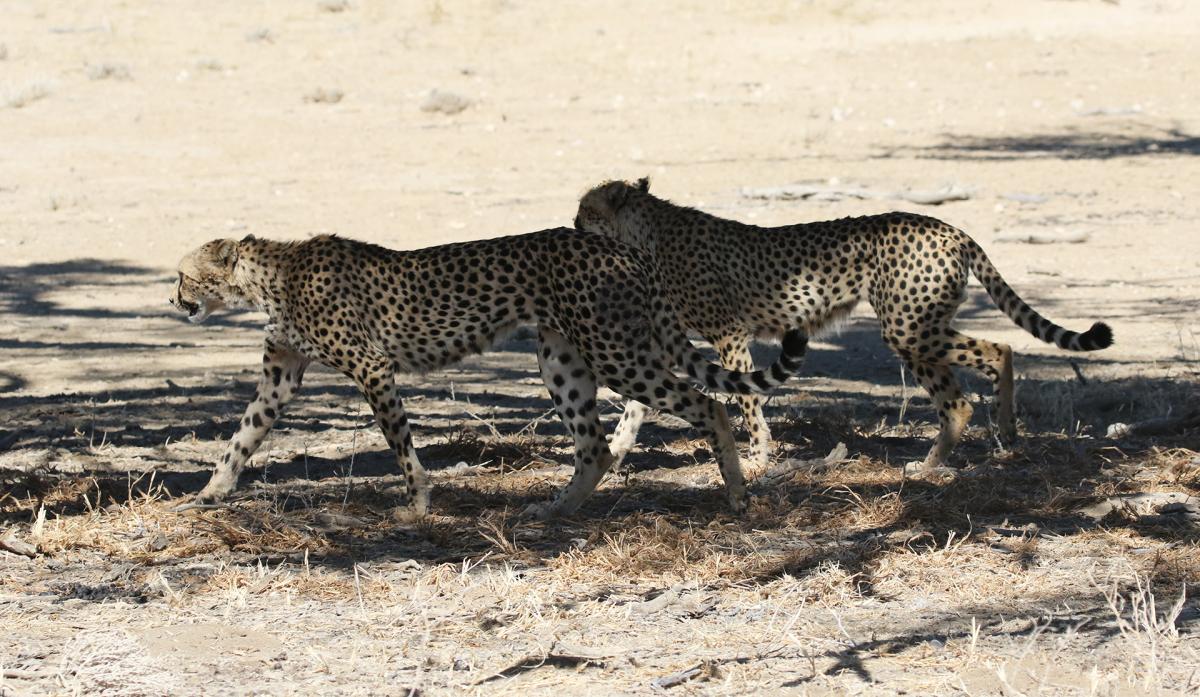 Safaris are unpredictable and this makes them so fascinating, you never know what to expect.

We prepare some sandwiches while with the binoculars we follow the cheetahs moving on the dry river bed, the desert view that opens in front of us is fantastic and this makes our sandwiches the best in the world :-)

We chat with some other travelers who, like us, take advantage of the picnic area, they come from an area even further North but they confess that the morning gave little to them as well.

We decide to go back South, we have to be at the gate by 4:30 pm because we booked a night safari with the park ranger, after sunset, only the ranger's vehicles can circulate and carry on the safaris.

Along the road we see numerous birds of prey and a multitude of antelopes, the waterholes we encounter along the way are very crowded and we take advantage of it for taking great pictures.

A gigantic nest built on a large tree "forces" a stop to observe what's going on inside this huge condo; the social weavers come out and go in from the many holes in the nest to bring food to the chicks; what a show.

These nests get to weigh so much to break the big branches on which they stand; they are the preferred hunting area for mongooses, in the early morning it is easy to see them hanging on the top of a nest ready to seize the occasion of a meal. 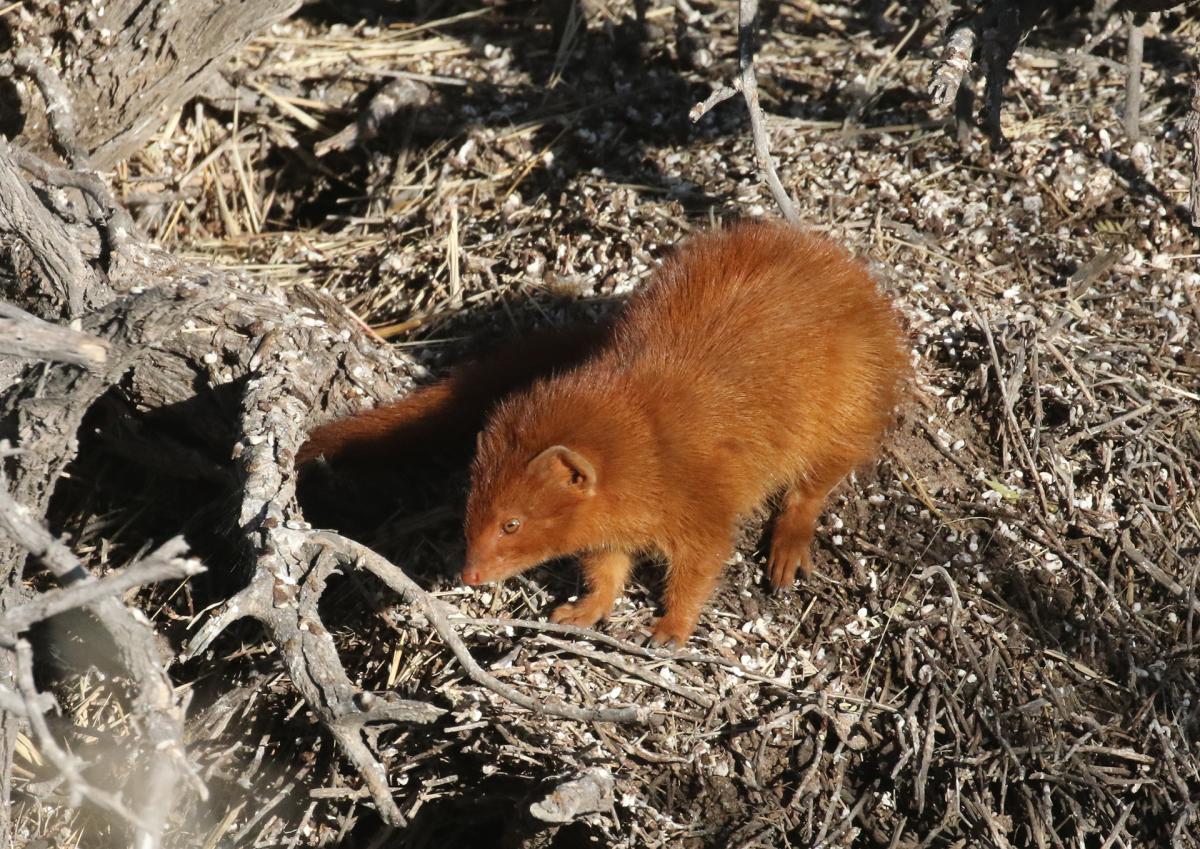 When we are a few kilometers away from the camp gate, a few meters from the road, we see two beautiful cheetahs walking quietly lit by the sunlight; we are the only car in the area, we follow them for a while trying to give them as little trouble as possible, avoiding cutting off their road and turning off the engine as soon as they stop.

What an exceptional sighting, the two cheetahs walk abruptly on our way, cross a couple of times the road, passing a few meters from our off-road, then lying in the shade of a tree. 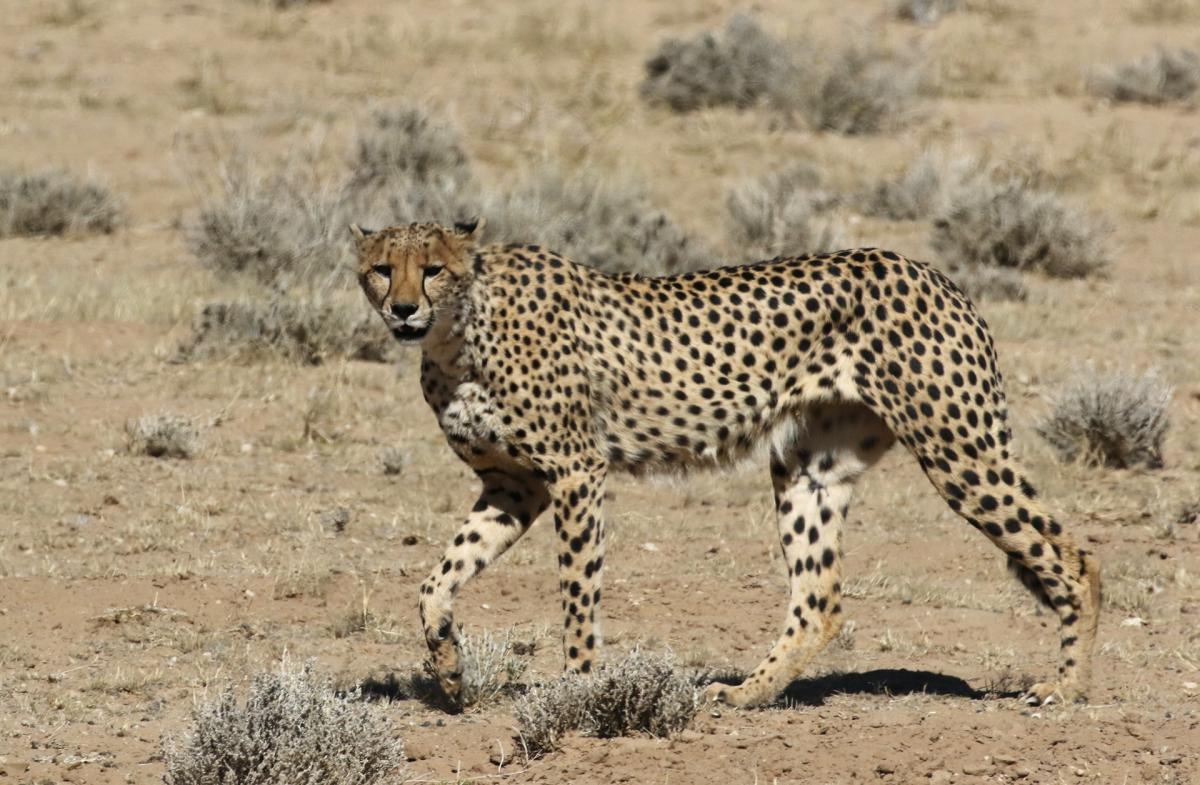 If we had passed by here a few minutes later we would have never seen them.

Satisfied we return to the campsite and shortly after we are ready to go out again on board the 4x4 of the ranger; the guide is a boy of well-prepared bushmen origins.

A few minutes from the start there is a giant eagle owl or Verreaux eagle owl perched between the branches where its nest is, it is beautiful and really difficult to spot because it camouflages perfectly with the trunk of the tree.

After sunset, crepuscular and nocturnal animals begin to get out of their dung and begin to move to get food; we look at the beautiful cape foxes, the sympathetic bat-eared foxes, the wild cats and the fast-paced hares. 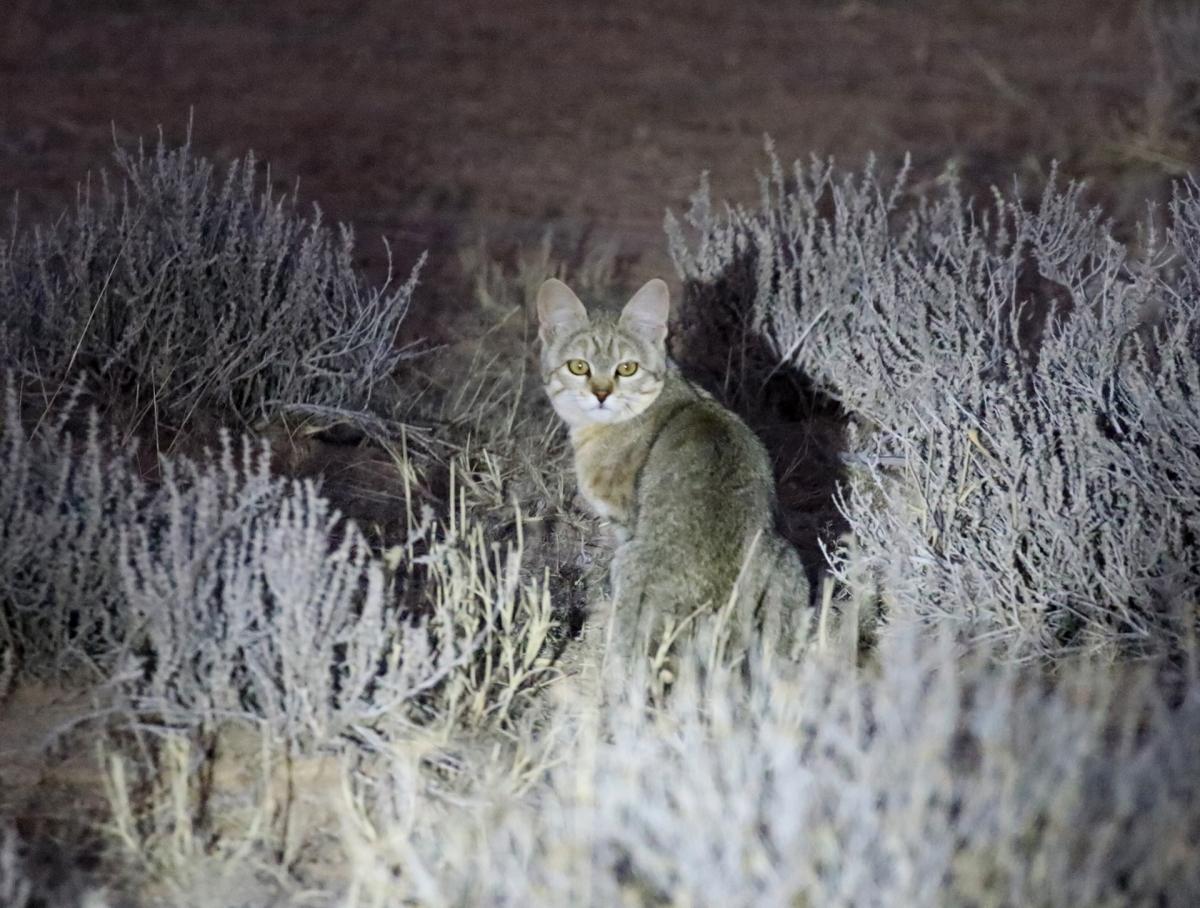 There is no more light and the only way to spot animals is the use of powerful spotlights that emit a bundle of concentrated light, thanks to the lamps we can see a couple of cheetahs who roam furtive at the bottom of a dune, today it was definitely the day of cheetahs.

After sunset the air became cold and the open car we are traveling does not offer any shelter, thanks god we had heavy clothes; but getting back to the campsite and getting into the local hot spot was nice, plus there is a tasty steak waiting for us.