Benin is the place where the Voodoo, or vodu, was born and today is the official religion of the country; voodoo means "soul" or "strength" in Fon, and at the time of the Kingdom of Dahomey it has had its maximum development and has remained unaltered over the centuries, thanks also to the dignitaries of the cult who have been able to perpetrate the rituals and ceremonies, although in the period of the European colonization this religion has been demonized.

Voodoo, contrary to what we Westerners are led to think, has a positive value and relationship with gods usually takes place in order to propitiate their favors and to achieve happiness and prosperity.

Voodoo and fetishes are part of everyday life for Benin residents, most of whom have fetishes that guard and protect access to villages, markets and homes.

A fetish is a statue or an object that contains in itself supernatural powers, its powers derive from the consecration rite that is carried out by spreading the fetish of some substances while reciting some prayers and offering sacrifices.

The fetishes are then decorated with some materials including horns, shells, nails, feathers, mirrors, metal, string, varnishes, cloth, raffia, fur, beads and herbs; also often on the fetish eggs are broken; all these elements have the goal of adding power to the fetish.

Fetishes propitiate health, happiness, and problem solutions; each fetish has its role, some in fact serve as protection from evil spirits, others serve to propitiate healing, others to bring happiness and fertility to the family.

If the problem is very difficult to solve, the feticheur often requires the sacrifice of an ox, a sheep, a goat or a chicken whose blood needs to be poured on the fetish to give him the necessary powers and strength to solve the problem.

Fetishes and shrines abound along the streets of Benin, but no one is as famous and powerful as the Dankoli fetish; this is, in fact, the most important and powerful fetish of Africa and it is a very popular pilgrimage site; in fact there are many people coming here from neighboring countries such as Togo, Nigeria and Ghana, but also from far-away countries such as Brazil and the Caribbean.

Usually voodoo shrines are placed near roko trees, these very hardwood trees, are endemic to tropical West Africa and can live up to 500 years; people believe they are endowed with supernatural powers and consider them sacred.

The Dankoli fetish is said to be so powerful that the voodoo followers who come here can communicate directly with the gods without the help of the vodounon, initiated of the voodoo religion; here the adepts can carry out the rituals themselves and make their requests and prayers to the divinities.

The fetish, indeed the fetishes, a male and a female, are earthy tombs that support innumerable wooden pallets covered with fat, blood, palm oil, hen feathers, eggs and rotting bones and lean against two sacred trees .

The ritual consists in climbing barefoot the cumulation and constricting a wooden peg in the mound while saying prayers and requests to gods are made, once the bait is fixed in the cumulation of earth, palm oil is poured over a kind of gin, that is distilled from manioc or the sodabe, a liqueur made by distilling palm oil, is spit on it.

Nearby two holes in the ground, called "the twins", are other fetishes where to address their prayers, one is dedicated to fertility in general while the other is to ask for twins.

The importance of giving birth to twins is a legacy of the peasant society where two extra arms were very useful, still people pour palm oil inside these two holes in the ground to ask to be pregnant with two twins .

The faithfuls who meet their demands have to come back to the fetish and bring an offer to thank the gods, usually they make a ritual sacrifice gagging a hen and pouring blood on the fetish.

If the request was particularly important, such as healing from a disease, the offer would have to be bigger and a goat or an ox would be sacrificed; the meat of these animals is then consumed and distributed to people who are protecting the fetish. 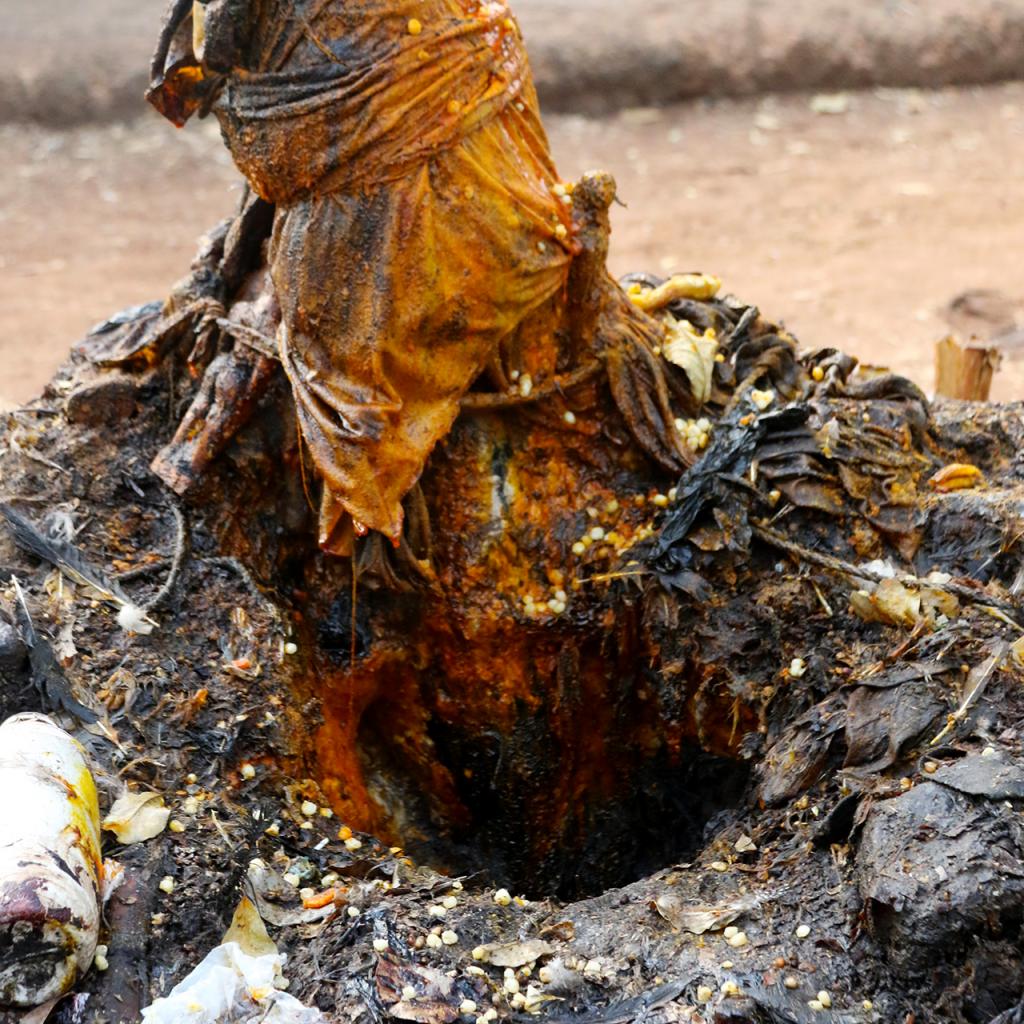 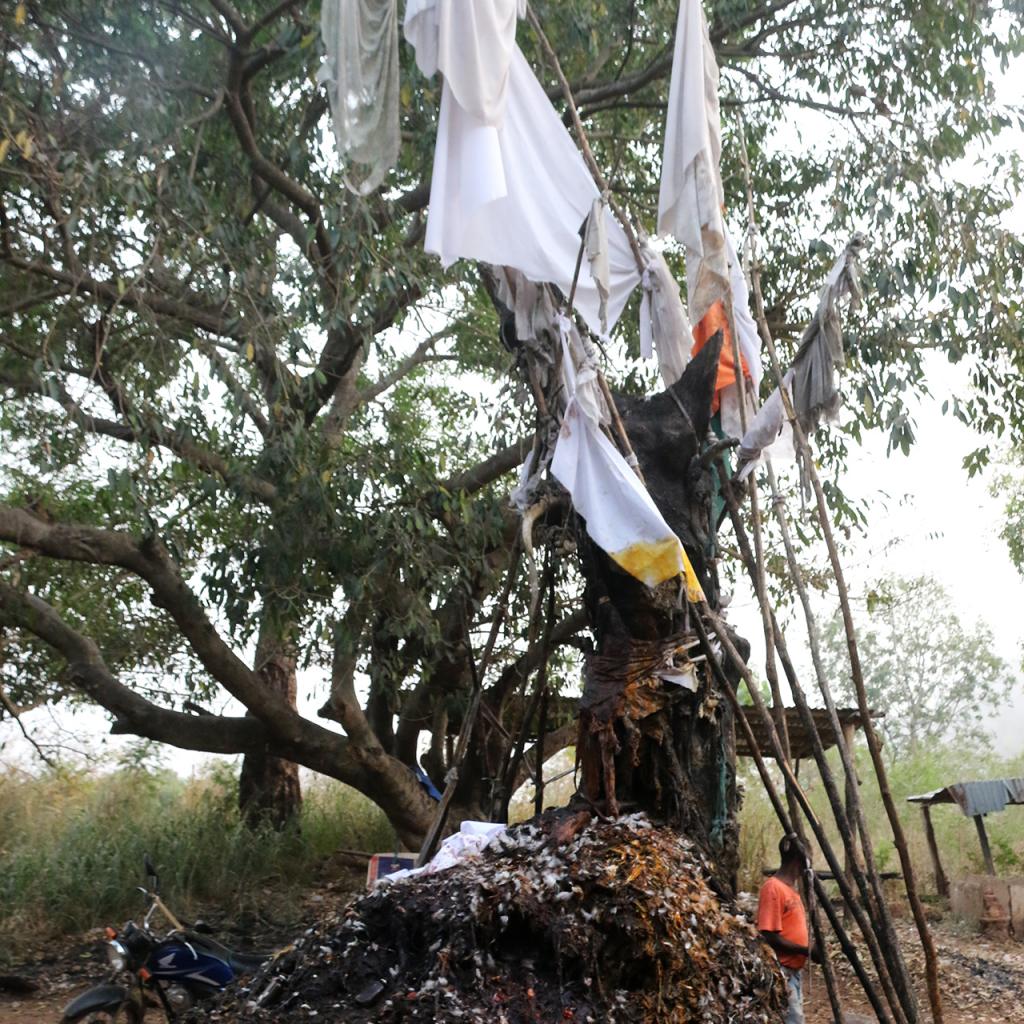 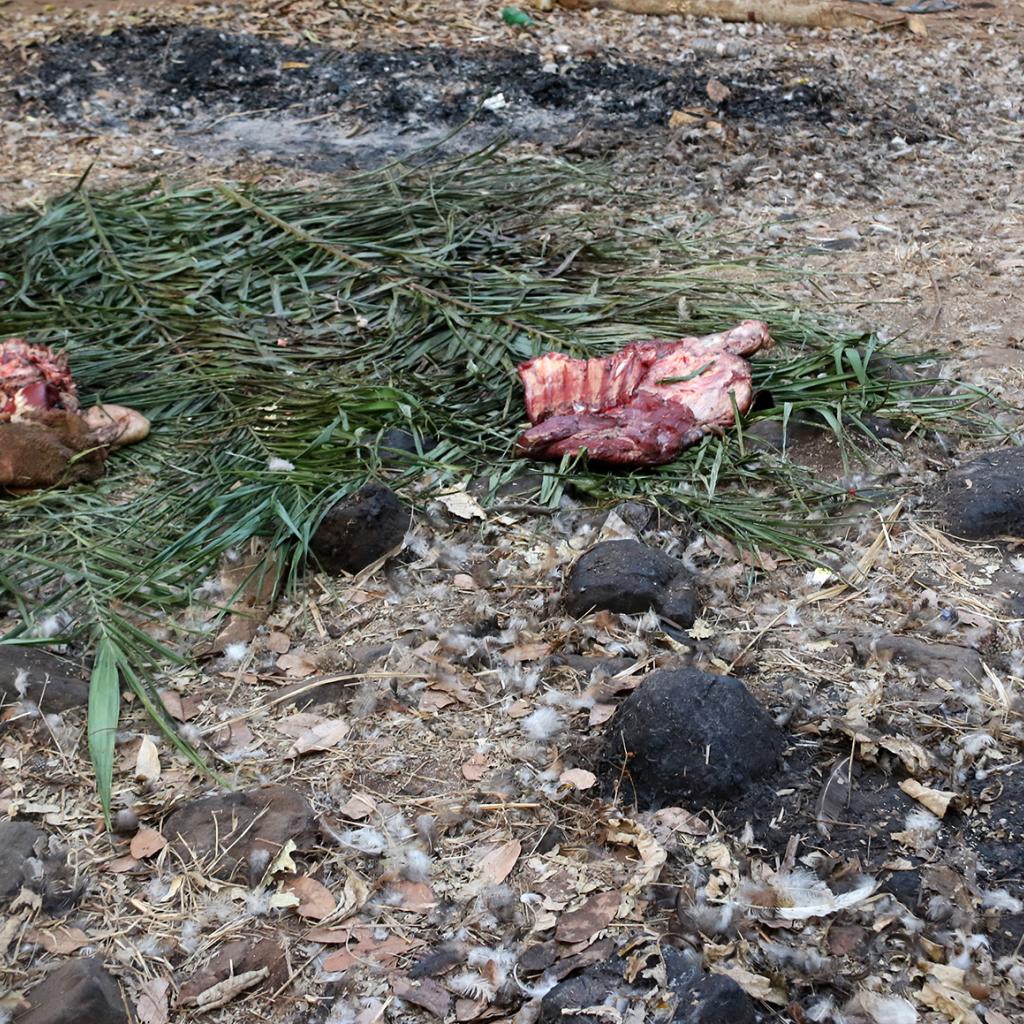