Ouidah is a quiet town on the Benin coast, rich in history and charm and pervaded by the strong presence of voodoo, that is practiced here by 90% of the population, and this is where the Voodoo Festival is held every year.

The Ouidah people are hospitable, kind and love to talk about their own city, customs, rites and their history.

Ouidah is the unmissable destination for those who want to get in touch with voodoo practices, Benin being the only state in the world to recognize voodoo as an official religion.

A very sacred place for the followers of this religion is the Temple of the Pythons; this temple is surrounded by painted walls and consists of a courtyard where there is a sacred tree that is guarded and protected by a voodoo altar and some little temples containing fetishes, and the main building that holds many pythons.

The Royal Pythons are considered sacred and represent the god Dangbe, one of the most powerful spirits of voodoo who brings life and fertility; these snakes are present inside the temple building, inside the walls, but at night, when the doors of the temple are left open, you can find them wandering around the city in search of food; those who find them will bring them back to the temple the following morning.

Right in front of the Temple of the Pythons is the Catholic Cathedral, the Basilica of the Immaculate Conception of Ouidah, that creates a strong contrast to the rest of the buildings; this church is very much frequented by the inhabitants of the city and the two religions, Voodoo and Catholicism are often mixed and those who profess Christian pay homage and participate in the voodoo rites and vice versa.

Voodoo, unlike what you think, especially because of the Hollywood films, is not a malevolent practice of black magic, indeed, the voodoo religion seeks to restore harmony between man and the universe through offers based on herbs, animals and spiritual rituals.

The city allows visitors to know more about the dreadful history of slavery and the slave trade thanks to numerous testimonies and monuments that marked the city's past.

An interesting place is the Portuguese fort of Sao Joao Baptista, home to the history museum; recently restored, it offers numerous information on slave trade and how slaves have brought voodoo and African traditions to Brazil and how they have remained almost unchanged until today.

Going through the "slave road" is an experience that reflects on atrocities that have been committed in the past, is a 4 km long road with various points of interest; during the centuries of the slave trade, this road was run by the slaves before being embarked on the ships, the end point of this ordeal is on the beach where an eloquent monument, the Door of No Return, was erected.

A statue well represents the past of this city, two masks are exhibited: the one above and with two vertical crevices represents the Abomey, it is at the top because they were in command; below there is a mask with three horizontal signs representing the Nigerians being subjugated, finally there is the scales of justice that has two faces signifying that double standards were applied.

Ouidah is also the preferred destination, both by locals and foreign tourists, to enjoy fantastic golden beaches and relax with a swim in the Atlantic Ocean. 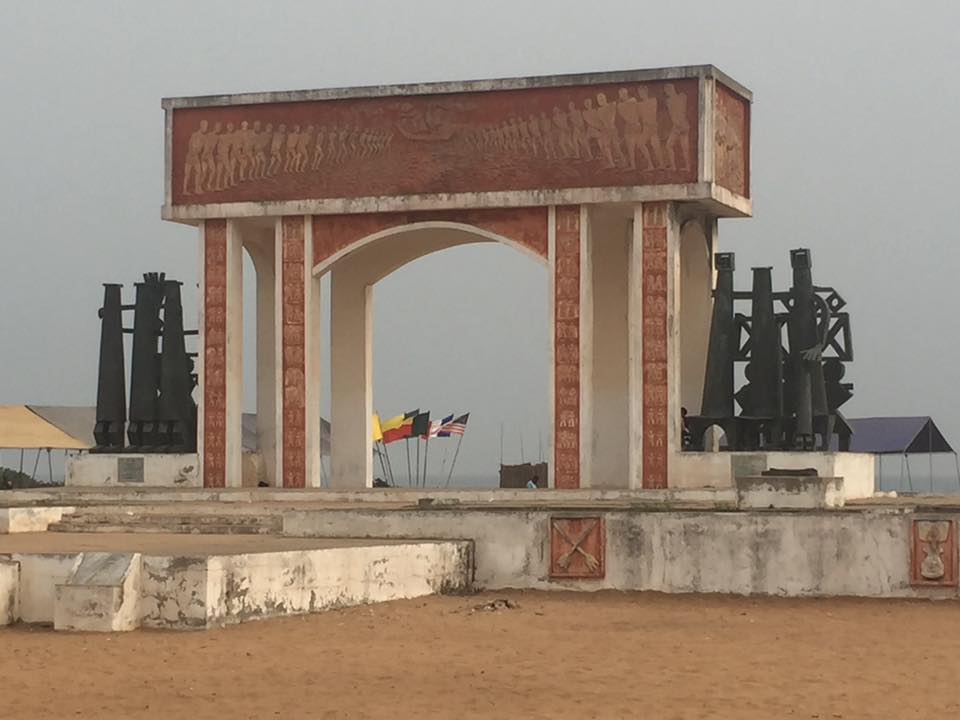