The Dassanech are a semi-nomadic population who mainly live near the Delta of the Omo River, near Lake Turkana, on the border with Kenya; this is a semi-arid area where temperatures are among the highest in the entire African continent.

The territory of the Dassanech is subject to seasonal floods that form large swamps during the rainy season, while it becomes an arid expanse in the dry months.

The subsistence activities are inevitably dependent on the territory, the Dassanech are dedicated to sheep-farming and agricultureand, from time to time, they are forced to move in search of more productive land and new pastures.

Fishing and hunting in the past were activities practiced only by those who for some reason lost their livestock and were forced, in order to survive, to practice these activities, today fishing is a good source of income and is increasingly practiced.

Hunting is a dangerous activity, the preys are the crocodiles that inhabit the waters of the Omo River, the Dassanech await the darkness to go out hunting silently on small canoes, they find the reptiles looking into the darkness for the reflection of their eyes that become phosphorescent when they are illuminated.

Hunting is practiced with a long spear to which a recovery rope is secured, a sort of harpoon; a small crocodile also ensures enough meat to feed a family for a week.

The Dassanech are a rather numerous group, the estimates speak of around 30,000 people, and they are the only population of the Omo Valley who speaks a Cushitic language, and they are also the tribe who lives in the Southernmost area.

The Dassanech society is divided into eight patrilineal clans, each characterized by its own identity and linked to certain areas of the territory, members of the same clan are forbidden to marry and even dance among themselves.

The Dassanech believe that every clan possesses specific powers, for example some members of a clan are able to cure the bites of a venomous snake spitting on the wound, those of another clan can control the water and the crocodiles, the Dassanech of another clans have the ability to keep dangerous animals away from their livestock, yet another clan members can cure burns, there is also a clan whose members can prevent drought by praying for rain.

Like many other populations of the Omo valley, the Dassanech also practice interesting and elaborate initiation ceremonies.

The most important of these ceremonies is the Dime or Dimi, that establishes the transition to puberty for the girls of the village and prepares them for marriage.

The Dime, that is the blessing of the first-born daughter to be fertile, lasts no less than six weeks, during which 10 cattle and 30 sheep or goats are sacrificed, not surprisingly this ritual takes place in the dry season when the cattle does not produce much milk and grazing is limited, slaughtering livestock at this time of the year provides meat to the village when other food sources are scarce.

The Dassanech families with daughters of similar age, generally between 8 and 10 years, gather near the banks of the Omo River, during the dry season; each clan has its own special site where to celebrate the Dime and where temporary huts are built used only for the period of the ceremony.

During the celebration, men and women dress in animal fur cloaks to celebrate and dance, while elderly village chiefs bless the girls.

At the same time as the daughter's blessing and her passage into adulthood, the father becomes a wise man or an elder in the village, a status that allows him to participate in the most important decisions concerning the life of the village and the clan, so the dimi becomes the most important ceremony in a man's life.

Circumcision is practiced for both boys and girls, this is a fundamental requirement to be able to marry, the Dassanech girls are circumcised when young, around 10 or 12 years old.

Girls can be circumcised at their mother's house or in another village, but always together with other girls of the same age who undergo the same ritual; the procedure is usually performed by an elderly woman, helped by the girl's relatives.

A leather strap is tied around the ankles to limit the girl's movement, this strap must be worn until the wounds have healed and the pain has subsided.

When the ritual has been completed, the girl is given to drink sour milk and given a necklace by her mother, from that moment on she will be allowed to wear a leather skirt to show that she is now considered an adult woman and that she is ready for marriage, that usually takes place soon after.

A man can marry all the women he wants but he must guarantee that he can support them, every wife must have her own hut where she lives with her unmarried children.

The Dassanech villages are made up of circular huts built by weaving branches and covered with straw and leaves or with animal skins during the rainy season, the entrance is a very low opening that forces them to crawl in, the villages are enclosed in a fence of bushes.

The huts, inside them, are not divided into different areas; the area intended for rest and the one where the objects of daily use and the food supplies are stored is the same.

They are the women who take care of the maintenance of the hut and they are also in charge of disassembling and reassembling the huts when they decide to move the village to a better area.

The Dassanech pay a lot of attention to physical appearance, both men and women wear numerous accessories such as necklaces, bracelets and earrings; they also make complicated hairstyles that for women also identify their status.

Most Dassanech have some body modifications such as the hole that is made in the lower lip and where feathers or flowers are inserted, or the scarifications that are made on the skin of the abdomen, shoulders and back.

The clothing itself is instead very simple and consists of a fabric or leather skirt. 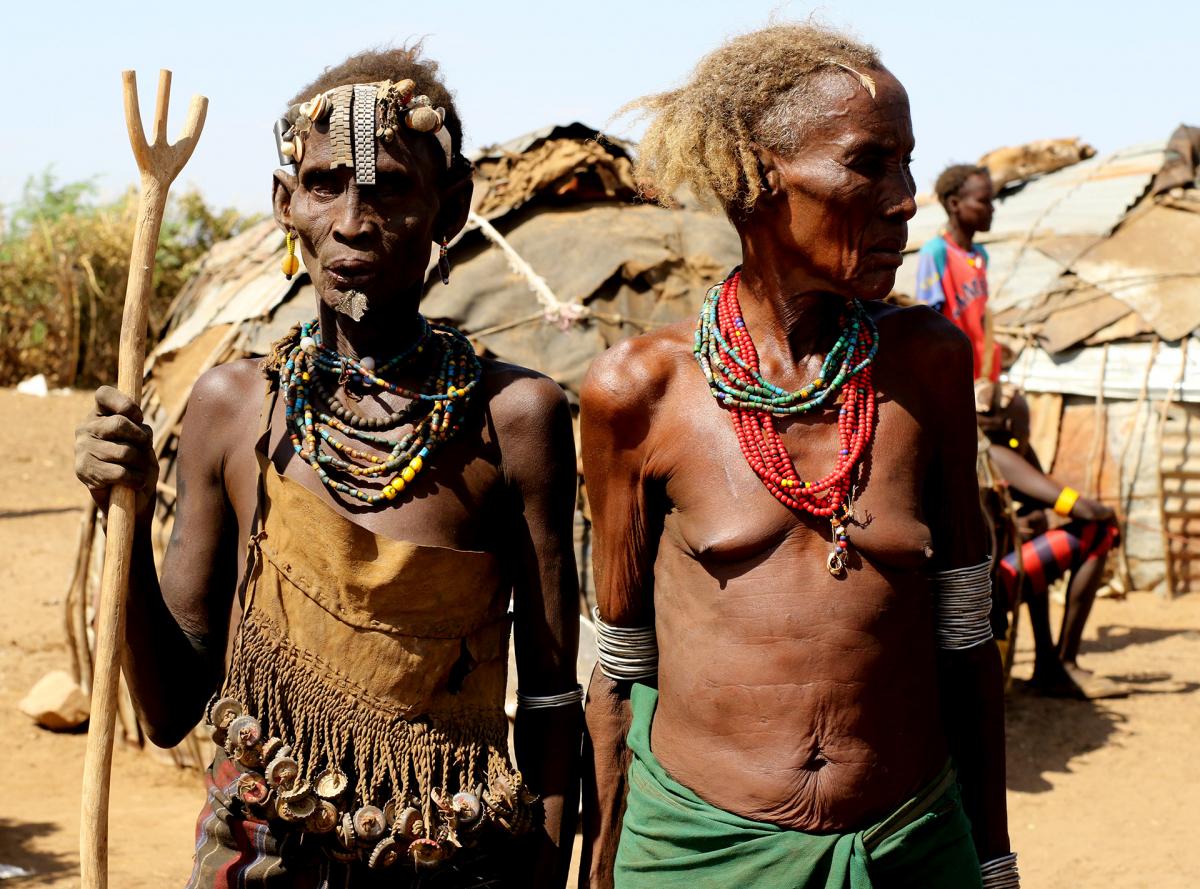